By Philip Richter on September 8, 2016 in Autonomous Driving, Uncategorized 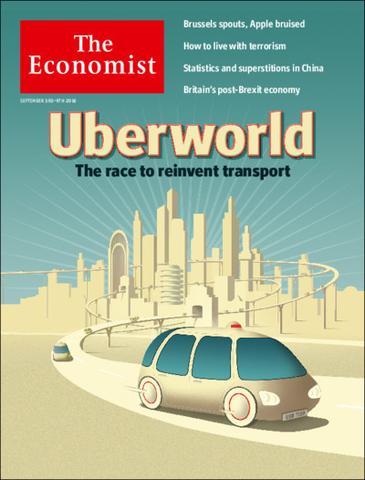 This week’s Economist has a thought provoking article on Uber. I distinctly remember my first Uber experience in October of 2012. Ordering a black car on my iPhone evoked the same feeling I had back in early 1997 when I ordered my first book on Amazon, Both of these experiences were similar “ah-ha” moments. Suddenly, something as tedious as buying a book or ordering a black car became effortless. Both are natural business models that make users immediate converts. Amazon began with books and now is crushing every retail sector imaginable. Uber has the same potential to upend the entire auto industry.

The Economist article can be read by clicking here or viewing below:

“LET’S Uber.” Few companies offer something so popular that their name becomes a verb. But that is one of the many achievements of Uber, a company founded in 2009 which is now the world’s most valuable startup, worth around $70 billion. Its app can summon a car in moments in more than 425 cities around the world, to the fury of taxi drivers everywhere. But Uber’s ambitions, and the expectations underpinning its valuation, extend much further: using self-driving vehicles, it wants to make ride-hailing so cheap and convenient that people forgo car ownership altogether. Not satisfied with shaking up the $100-billion-a-year taxi business, it has its eye on the far bigger market for personal transport, worth as much as $10 trillion a year globally.

Uber is not alone in this ambition. Companies big and small have recognised the transformative potential of electric, self-driving cars, summoned on demand. Technology firms including Apple, Google and Tesla are investing heavily in autonomous vehicles; from Ford to Volvo, incumbent carmakers are racing to catch up. An epic struggle looms. It will transform daily life as profoundly as cars did in the 20th century: reinventing transport and reshaping cities, while also dramatically reducing road deaths and pollution.

The wheels of change
In the short term Uber is in pole position to lead the revolution because of its dominance of chauffeured ride-hailing, a part of the transport market that will see some of the fastest growth. Today ride-hailing accounts for less than 4% of all kilometres driven globally, but that will rise to more than 25% by 2030, according to Morgan Stanley, a bank. The ability to summon a car using a smartphone does not just make it easy for individuals to book a cheaper taxi. Ride-sharing services like UberPool, which put travellers heading in the same direction into one vehicle, blur the boundaries between private and public transport. Helsinki and other cities have been experimenting with on-demand bus services and apps that enable customers to plan and book journeys combining trains and buses with walking and private ride-sharing services. Get it right, and public-transport networks will be extended to cover the “last mile” that takes people right to their doorsteps. This will extend the market for ride-hailing well beyond the wealthy urbanites who are its main users today.

But in the longer term autonomous vehicles will drive the reinvention of transport. The first examples have already hit the road. Google is testing autonomous cars on streets near its headquarters in Mountain View. A startup called nuTonomy recently launched a self-driving taxi service in Singapore. Tesla’s electric cars are packed full of driver-assistance technology. And within the next few weeks Uber itself will offer riders in Pittsburgh the chance to hail an autonomous car (though a human will be on hand to take back the wheel if needed).

Self-driving cars will reinforce trends unleashed by ride-hailing, making it cheaper and more accessible. The disabled, the old and the young will find it easier to go where they want. Many more people will opt out of car ownership altogether. An OECD study that modelled the use of self-driving cars in Lisbon found that shared autonomous vehicles could reduce the number of cars needed by 80-90%. As car ownership declines, the enormous amount of space devoted to parking—as much as a quarter of the area of some American cities—will be available for parks and housing instead.

It is not clear which companies will dominate this world or how profitable it will be. Uber will not win in its current form: a ride-hailing business which depends on human drivers cannot compete on roads full of self-driving cars. But this existential threat is spurring the firm’s innovation (see article). With its strong brand and large customer base, Uber aims to establish itself as the leading provider of transport services in a self-driving world. It is also branching out into new areas, such as food delivery and long-distance cargo haulage using autonomous trucks. There is logic in this ambition. Carmakers lack Uber’s experience as a service provider, or its deep knowledge of demand patterns and customer behaviour.

But firms that pioneer new technological trends do not always manage to stay on top. Think of Nokia and BlackBerry in smartphones, Kodak in digital cameras or MySpace in social networking. Much will depend on which firm best handles the regulators. Technology companies have a history of trying new things first and asking for permission later. Uber’s success in ride-hailing owes much to this recipe, yet when it comes to autonomous vehicles, the combination of vague rules and imperfect technology can have deadly consequences.

Even for the winners, it is not clear how great the rewards will be. As more firms pile into ride-sharing, and autonomous vehicles become part of the mix, the business may prove to be less lucrative than expected. By matching riders with drivers, Uber can offer transport services without owning a single vehicle, and keep the lion’s share of the profits. But if its service becomes an integral part of urban transport infrastructure, as it hopes, Uber could end up being regulated, more highly taxed, broken up or all of the above. In a self-driving world, Uber might also have to own and operate its own fleet, undermining its “asset-light” model. The would-be high-margin digital disrupter would then look more like a low-margin airline.

The great road race
For now Uber is the firm to beat in the race to transform the future of personal transport. Unlike Apple or Google, it is singularly focused on transport; unlike incumbent carmakers, it does not have a legacy car-manufacturing business to protect. Its recent rapprochement with Didi, its main rival in China, has removed a major distraction, allowing it to devote its $9 billion war chest to developing new technology. Its vision of the future is plausible and compelling. It could yet prove a Moses company, never reaching its promised land—it might end up like Hoover, lending its name to a new product category without actually dominating it. But whether Uber itself wins or loses, we are all on the road to Uberworld.

Philip Richter is President and co-founder of New-York-City-based Hollow Brook Wealth Management, LLC. The Turtle Garage Blog, he says, is dedicated to his "love of excessive personal transportation."
View all posts by Philip Richter →
What’s My Chateau Worth?
A Day With Tom Seaver