On these pages I’ve written extensively about my pre-war BMW collection. I love these machines for their asthetics, design, engineering, and history. From the mid 1930’s until the start of World War II, BMW shipped a total of 217 new motorcycles to England. They were all sold via the only factory authorized UK distributor, AFN, Ltd. My R5, R51, and R71 all share the same British AFN heritage. My bikes represent three of the 217 BMW’s that were sent to England and sold by AFN before the war. Indeed, the most complete and authentic pre-war BMW’s in my collection are the bikes that have come out of England.

Living their lives across the English Channel, these machines were spared the ravages of World War II on the continent. I have extensive history and documentation on my British BMW machines. Astonishingly, my R51 and R71 had no more than two owners from new. These bikes were cherished for decades by the same individual or family.

The short history below was written by Robert Freeman. Robert is the current Registrar of pre-war BMW Motorcycles sold by AFN Ltd. Miraculously, most of the AFN written records of importation were saved. Recently they have all been digitally scanned and catalogued. Some of these records even include notations on original owner contact information and early service records (by model and serial number). Warranty work was also documented.  As regular Turtle Garage readers know, Robert once owned my 1937 BMW R5. He saved this rare piece of BMW history from the junkpile. Over the years we have become good friends and email pen pals. He is truly the Yoda of pre-war BMW’s and I have learned much from him. Without Robert I would be a neophyte in terms of pre-war BMW knowledge. He has been instrumental in helping me research and certify my R5 and R71. More recently he helped me locate and acquire an original “barn find” R51 with only two owners from new. This bike has just arrived in Los Angeles and is currently being sorted by Mike Dunn at Vintage German Motorcycles.  It will not be fully restored, but rather it will be carefully preserved in its original (and excellent) condition. 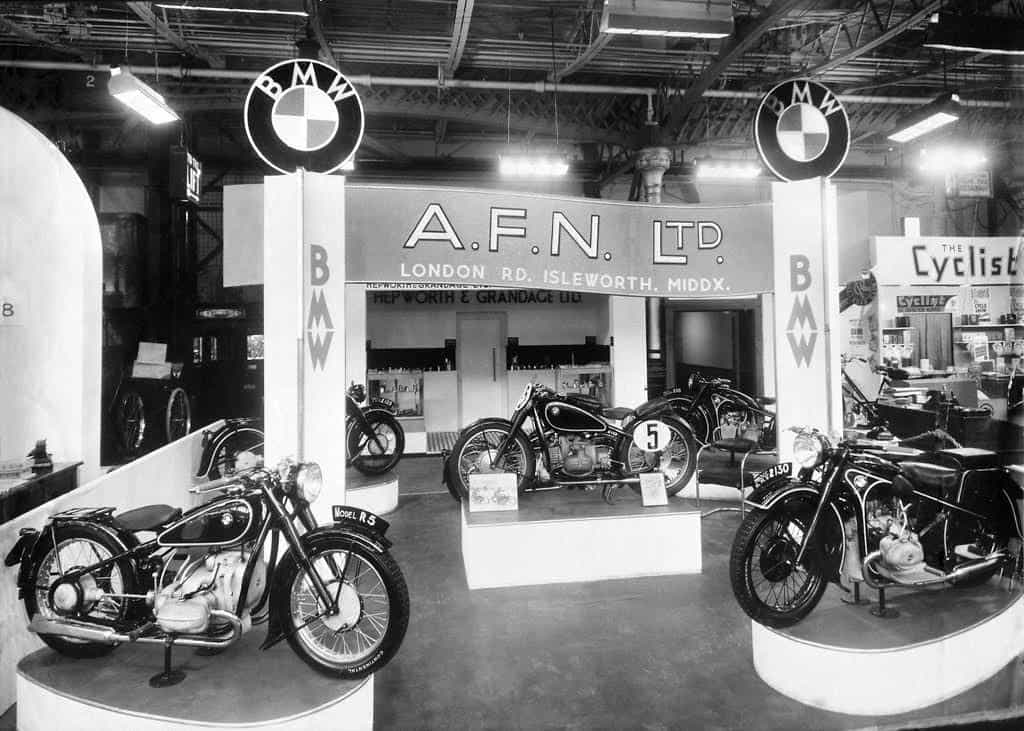 The initials, AFN stood for Archibald Frazer Nash. He founded Frazer Nash Cars. They were unique in having a chain drive to the rear wheels. Successful in motor sport, in the 1930’s Frazer Nash approached BMW for license to use their new 6 cylinder sports engine, and build Frazer Nash BMW cars. The factory started to supply right-hand-drive body’s, and engines, assembled on Isleworth, but, part of the deal was also to promote and sell BMW Motorcycles. This came into being in 1935. The earliest record is an R17 sold in October 1935. By August 1939, when all imports and sales ceased, some 217 machines had been imported and sold, from the humble R20 to the R71. AFN had Dealers across England selling BMW’s. Oxford, Southampton, Nottingham, Liverpool, Birmingham to mention a few. Many of these were still in business in the 1960’s.

The official Frazer-Nash Car Club website can be accessed here.

Last week Robert forwarded me this video series that explains in detail the history of AFN, Ltd. It is a thorough and excellent lecture given by James Trigwell, post war Registrar of the AFN Archives:

One Response to The History of AFN, Ltd.