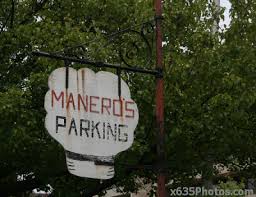 This year, Saturday’s Cars & Community showcased 125 vehicles, including some of the gnarliest from the 80s and 90s at RADwood and the car world’s quirkiest at Concours d’Lemons. Sunday’s Concours d’Elegance celebrated 140 world-class vehicles. 57 judges from across the globe selected a Vignale-bodied 1948 Packard Convertible Victoria as Best of Show.

Turtle Garage attended the Greenwich Concours with two motorcycles—a 1937 BMW R6 and an original 1938 BMW R51. We were honored to win the FIVA Preservation Award with the unrestored R51. 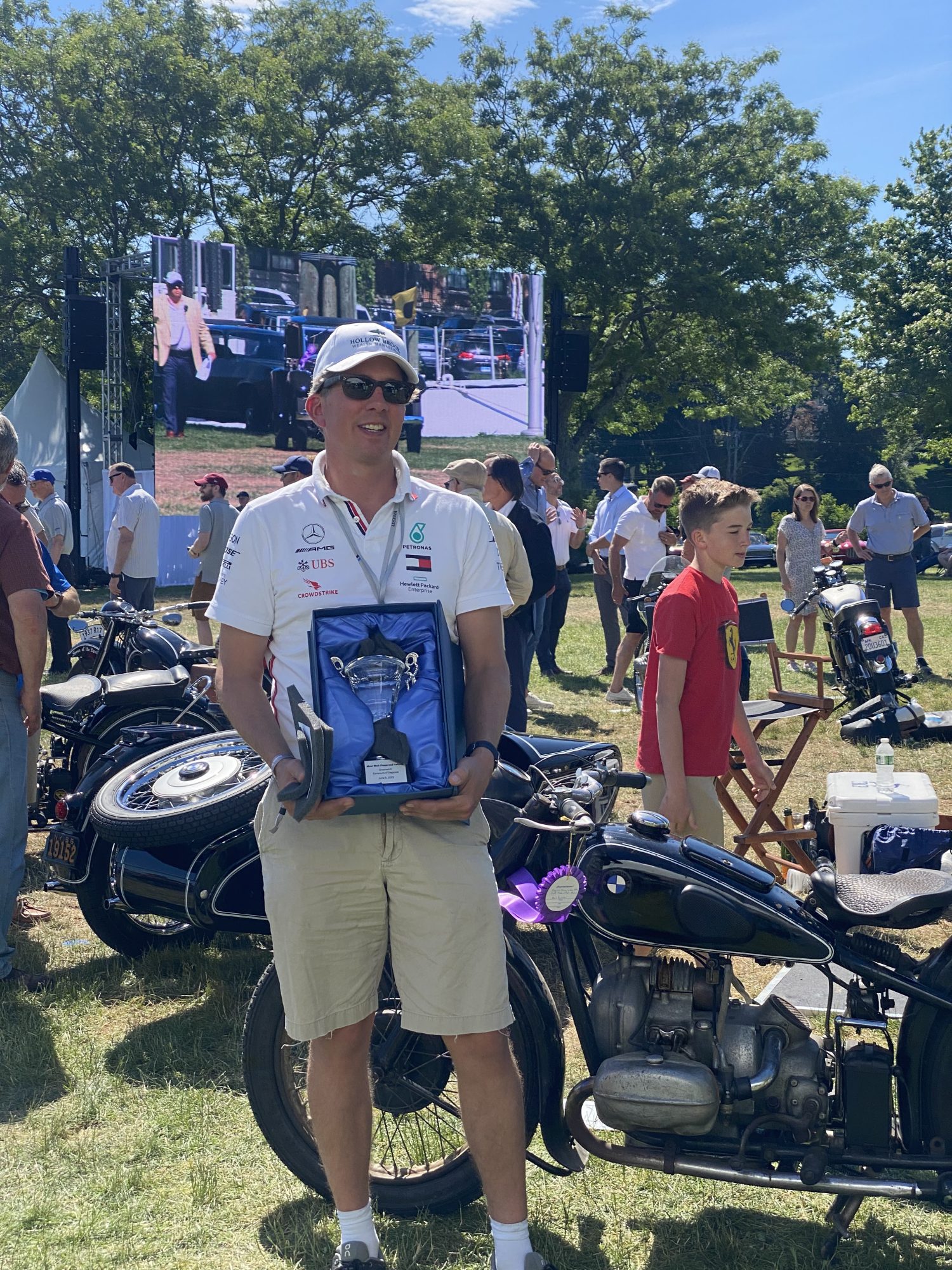 In the Greenwich of my youth, there existed a famous steakhouse called Manero’s. Manero’s was located at 557 Steamboat Road, around the corner from Roger Sherman Baldwin Park (where the annual Greenwich Concours takes place). I eagerly anticipated my yearly birthday dinner celebration at Manero’s as a young boy. Old Nick Manero would greet guests at the door wearing his white muffin top chef’s hat. All the wait staff would sing happy birthday to youwith a deep and variable loud tone that remains forever recorded in my mind. Everyone in Greenwich knew Manero’s, and the establishment was revered as an old-school steak lover’s paradise on par with Peter Luger’s in Brooklyn. The operation also had a separate deli counter and butcher shop. Sadly, Manero’s is long defunct and the site is now home to multi-million dollar condos. However, the butcher shop lives on in a humble storefront called Greenwich Prime Meats. 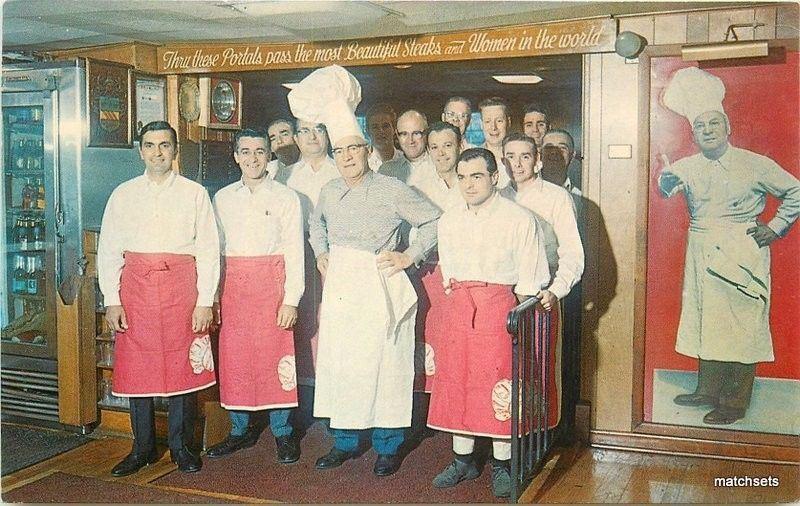 For our pre-Concours dinner, the FitzPatrick’s arranged a full-on Manero’s style dinner from Greenwich Prime Meats complete with onion rings, Gorgonzola salad, tenderloin, and marinated garlic bread. We had a wonderful evening of laughter and talked about cars, cars, and more cars. 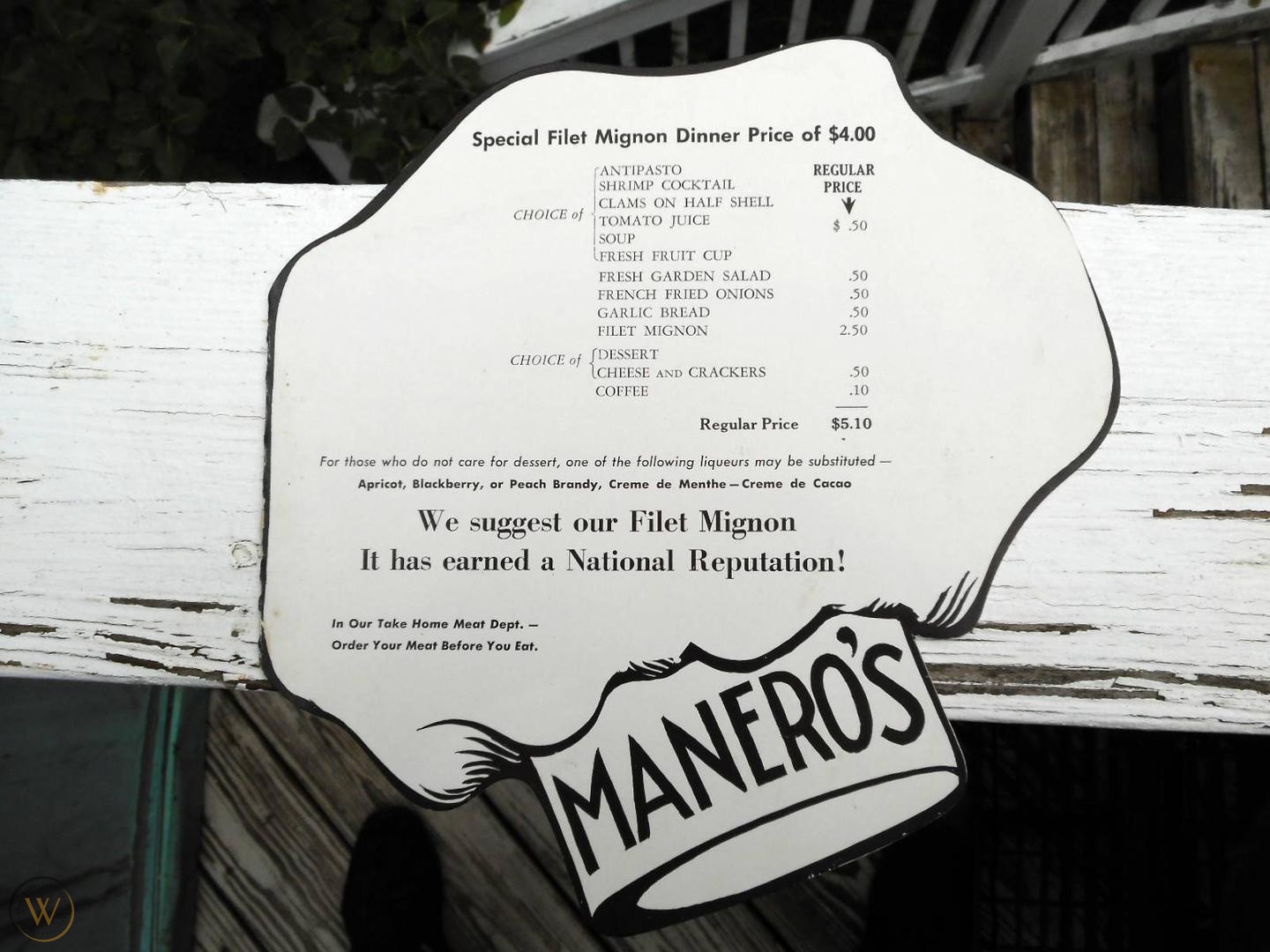 An old menu from Manero’s—who could beat Filet Mignonette dinner for $4?

After dinner, Dan took me into his garage. Beneath an enormous cover was a spectacular 1970 white Eldorado. Sitting next to it was a 1975 Alfa Romeo Series 2 Coda Tronca Kamm tail 2000 Spider Veloce. We marveled at the sheer size of the Cadillac. The back seat was basically a New York City studio apartment. The Spider Veloce could almost fit inside that sumptuous Eldorado. A few days after our dinner, I came across Dan’s article, which we have reposted below. It struck me as a concise and genuine account written by a true car enthusiast. His article also explains some history about the Greenwich Concours and the Malcolm Pray Achievement Center. I thought we would repost Dan’s piece for Turtle Garage readers. You can also access Dan’s blog here at www.danielmfitzpatrick.com

For the Love of the Automobile

I’ll admit it. I am a car guy. Always have been, always will be. As a vice, it is relatively harmless, except to the pocketbook and usable space in the garage. My wife tolerates this passion, albeit grudgingly. Perhaps she takes comfort in the fact that the only thing that can steal my attention away from my family has an internal combustion engine for a heart.

Why do I love cars so much? Growing up in a relatively rural area, cars represented freedom, adventure. It helped that I came into motoring awareness in the late ’60s and early ’70s when the automakers in Detroit were at their zenith and foreign imports were becoming more available and affordable. This was a time before the increased price of gas and the law of aerodynamics conspired to limit their size and individuality of design, imposing the sense of conformist sameness we experience today.

The sheer bigness of American cars at that time provided automobile designers with wide swaths of sheet metal with which to sculpt forms that could turn heads and capture hearts. The narrower streets of Old-World towns and villages forced European car makers to work their magic on smaller canvases, which they did in most amazing ways. In Italy, designers like Pininfarina and Bertone created shapes with metal echoing the genius of what their earlier countrymen Bernini and Michelangelo created with stone. In their highest form, some cars can be considered motorized works of art.

As with all art, remarkable cars need to be seen in order to be enjoyed. There exist museums throughout the world dedicated to automobiles, usually focused on a single manufacturer or the collection of a particular enthusiast. Sadly, not everyone can travel to see them, but — and here’s the wonderful secret to becoming an automobile aficionado — being mobile, the cars can come to us!

A case in point — for local car enthusiasts, this weekend is a special treat like Christmas and the Fourth of July all combined into one: the annual Greenwich Concours d’Elegance has rolled into town!

The Greenwich Concours (https://www.greenwichconcours.com) is a two-day extravaganza of incredible cars and car-themed activities. Considered by many to be the best of the best in the northeast, the Concours has a long and illustrious history of bringing exceptional cars to the shorefront Roger Sherman Baldwin Park. Saturday features RADwood (cars from 1980-1999) and the tremendously entertaining “Concours d’Lemons.” Sunday is the big day, with cars of all classes competing for prizes to be awarded by highly discriminating world-class judges. For a review (with photos) of past exhibits, go to https://newenglandrockreview.com/category/automobiles/greenwich-concours-delegance-automobiles/.

But great cars can do more than delight the eyes; they can also be used to teach important life lessons. Longtime Greenwich resident and automobile luminary, Malcolm Pray, was well known for his incredible, multifaceted, and wide-ranging car collection. Before his passing in 2013, Malcolm established the Malcolm Pray Achievement Center in Bedford, New York (https://www.prayachievementcenter.org) to use his world-class collection to educate and inspire young people of all backgrounds to strive to achieve all that they are capable of, or, in Malcom’s words, for “driving youth towards success.”

While he was alive, Malcolm would personally greet and welcome each visiting group of schoolchildren, sharing his personal story of success and the lessons and habits which he felt were critical to that success: staying in school, working hard, looking people in the eye, and keeping a positive attitude. These attributes are memorialized on two signs hanging on the walls of the Achievement Center’s main room which read: “Luck is where preparation meets opportunity” and “Whether you think you can, or you think you can’t, you’re right.”

I cannot imagine any young person not being incredibly impressed by this white-haired man in a suit and tie telling them, “You want to be successful? You want to be a millionaire? I made it, and I can tell you my secret.”

Malcolm is remembered today for many things, most of which relate to his love of cars. He will undoubtedly be at the Concours in spirit. If perchance you spot a car this weekend that tugs a bit at your heartstrings, think of Malcolm. He might just be sharing the moment with you. 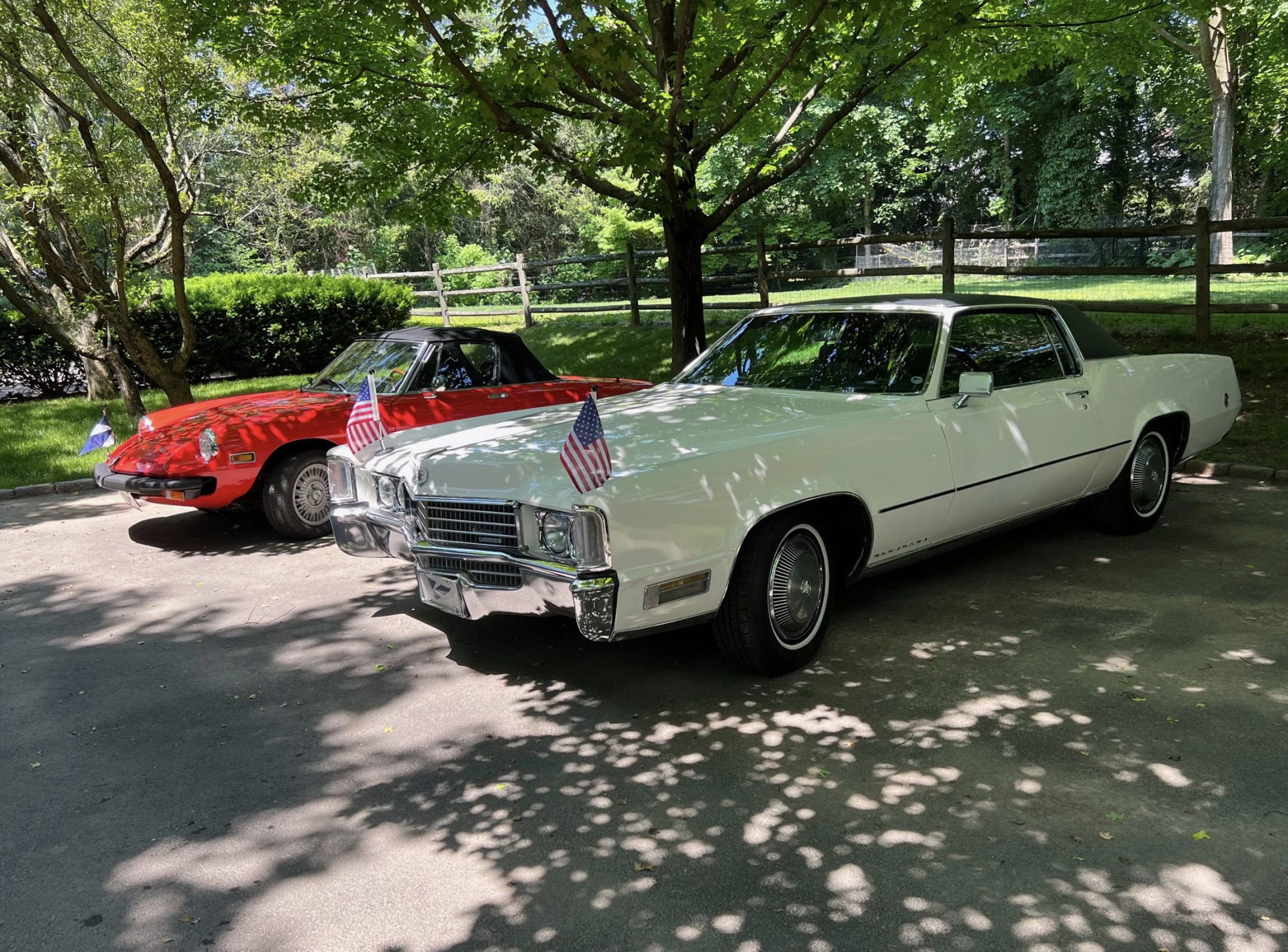 Dan’s 1970 Eldorado alongside the Alfa Romeo 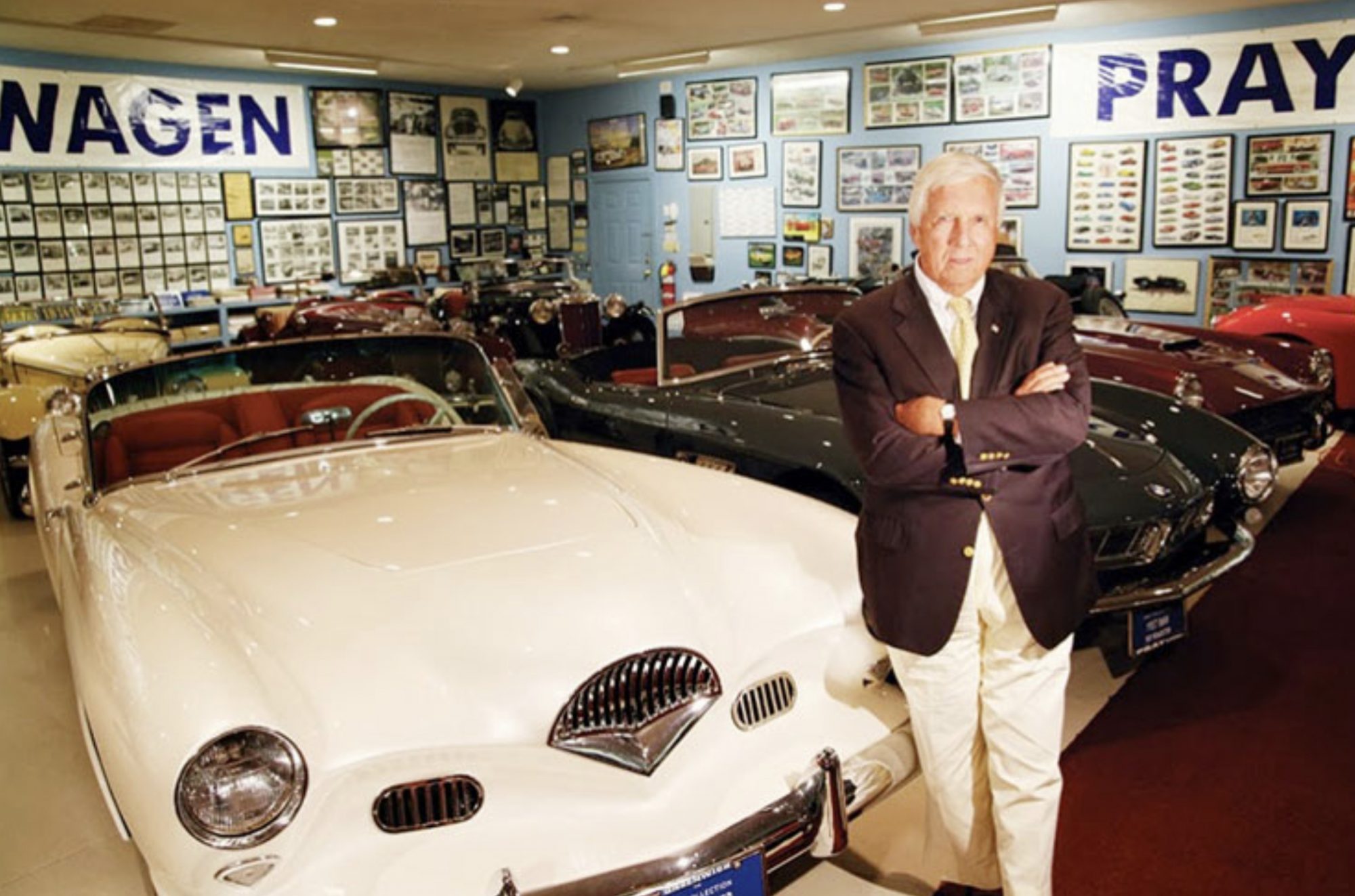 Philip Richter is President and co-founder of New-York-City-based Hollow Brook Wealth Management, LLC. The Turtle Garage Blog, he says, is dedicated to his "love of excessive personal transportation."
View all posts by Philip Richter →
The Future of F1: Miami or Monaco?
Always Bet on Black

One Response to Greenwich Concours, Manero’s, and the Love of the Automobile