In 2021, a unique partnership between Lime Rock Park and the Turtle Invitational culminated in a new trophy called the Best Race Car Award. Lime Rock Park CEO Dicky Riegel and Sunday in the Park Lime Rock Concours Chairman Lowell Paddock serve on the Board of the Turtle Invitational. Last year, we created a reciprocal trophy recognized at both the Sunday in the Park Lime Rock Concours and the Turtle Invitational. At the 2021 Turtle Invitational, a spectacular 1952 Allard J2X won the inaugural Lime Rock Park award for Best Race Car. This particular Allard has racing history at Lime Rock park and came complete with its very own decades-old Lime Rock Park trophies. Adding another level of unique flavor to this historic Allard was the fact that the driver and handler of this bodacious race car is a junior at McPherson College named Cameron “Cam” Luther. Cam recently shared a remarkable story about the recent acquisition of an extraordinary Porsche 356 Speedster. I’ve gotten to know young Cam over the last few years and am impressed by his passion, enthusiasm, and knowledge of collector cars. We agreed to share his 356 story here on Turtle Garage—and we look forward to future updates on this ongoing project.

Cameron is a junior studying Automotive Restoration Technology at McPherson College, where he’s active in the Car Show Judging Club and part of a small team restoring a 1953 Mercedes 300S cabriolet. He’s attended Pebble Beach and Hershey since age three and apprenticed in Porsche shops throughout high school. This summer, Cameron interned at the REVS Institute, home of the Miles Collier Collection, and assisted at Amelia Island, Laguna Seca, and Pebble Beach. He writes his blog at www.356SC.com and is rebuilding a 1977 Porsche 911S and a 1968 Jaguar E-type roadster in his free time at school. 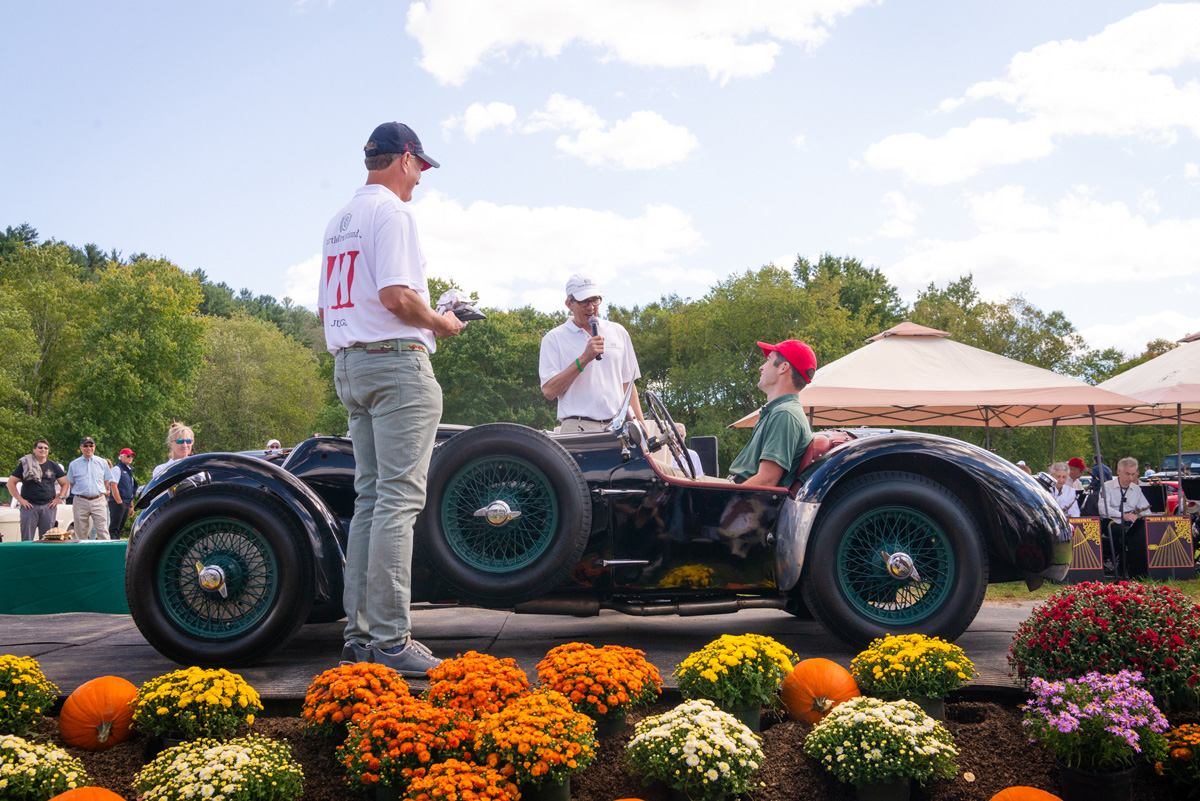 In April 2018, my dad and I were attending a local sports car gathering in our Irish Green 1977 911S Targa. As we walked around looking at the variety of vintage cars in attendance, something caught my eye. Little did I know, this was the start of a three-year pursuit that ended just two weeks ago. Parked off to the side of the event was a faded silver Porsche 356 speedster with what looked like an original black interior and very dark red honeycomb tail lights. As I got closer, I noticed the dash only featured two large gauges rather than three, like most 356s I had been around as a child or worked on throughout high school. I didn’t even know at the time that this denoted the car as a Pre-A Speedster, but I did know it was love at first sight. The owner was standing by the car, and my dad and I struck up a conversation about the car’s history, which ended with one question: “Would you be interested in selling your car?” Unfortunately, the answer was no, as is often the case at first.

This 1955 Porsche 356 Speedster, chassis #81132, left the factory on November 30th, 1955, and was part of the tail end batch of 55 Speedsters, which received the 1600 super engine. The car was originally finished in white, one of three colors offered in the first model year (red, white, and blue). It was purchased originally by Colonel Smith in America. Smith had a racing team consisting of two Speedsters, a 550 Spyder, and a 300 SL Roadster. Every car on the team was finished in red Dupont 300SL lacquer paint. The car was purchased by Harold Huff, who earned the SCCA Regional Championship two years in a row with the Speedster. In 1964, the Pre A engine and transmission was exchanged for a later 741 Gearbox and a hopped-up S.C. engine put together by Paul Kuntzmann at Brumos Porsche. 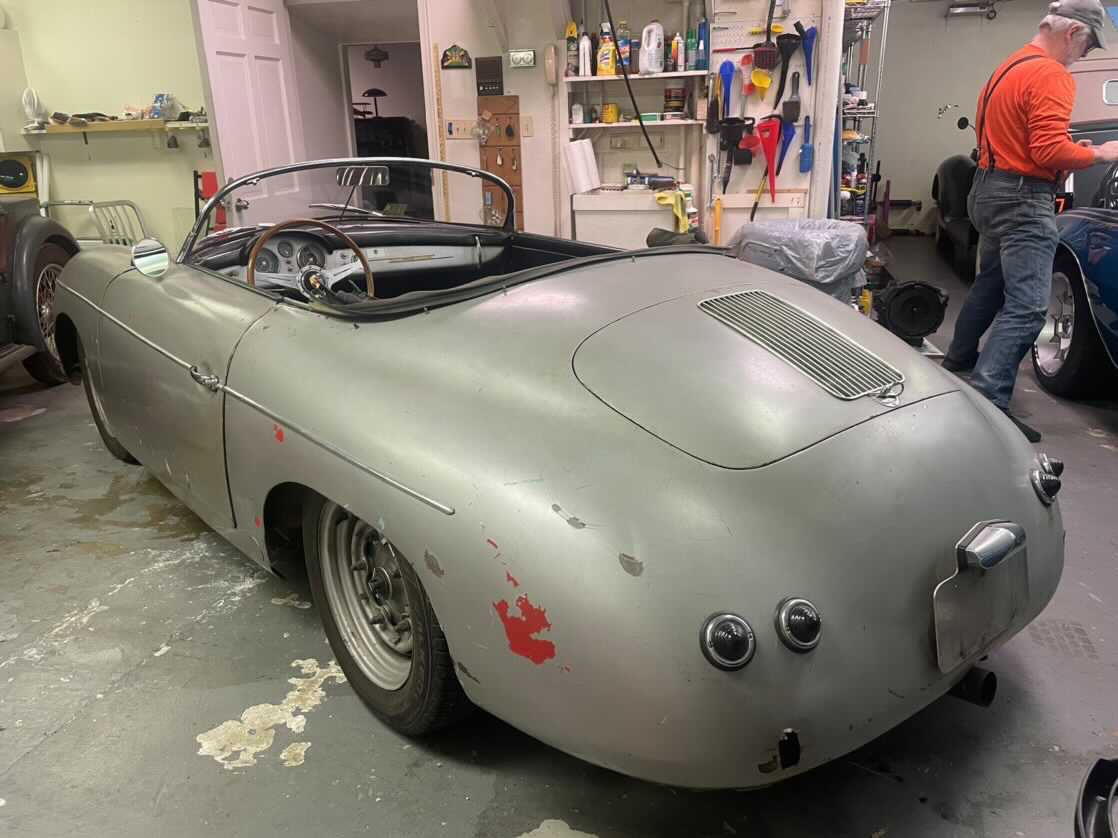 The next owner was Chick Stanton of Arlington, Virginia. He made up a book on the history of the Speedster. He had purchased it to go racing in late 1964. The braking system was overhauled under Chick’s ownership, and other minor maintenance work was performed. Chick continued racing the car with the SCCA at tracks like Marlboro Speedway in Maryland and Summit Point in West Virginia. Two things occurred for Stanton in 1969: he sold his first Porsche, the Speedster, to his friend John Harter, and he started working in the sales department at Heishman Porsche in Arlington, Virginia. His career lasted until 2006, when he retired and had a multi-generational impact on the D.C. area Porsche community. A few years later, Chick became involved with the Cannonball Run and ran a 1974 US Carrera with a twin-turbo kit created by the dealership mechanics and excelled in the Sea to Shining Sea event. 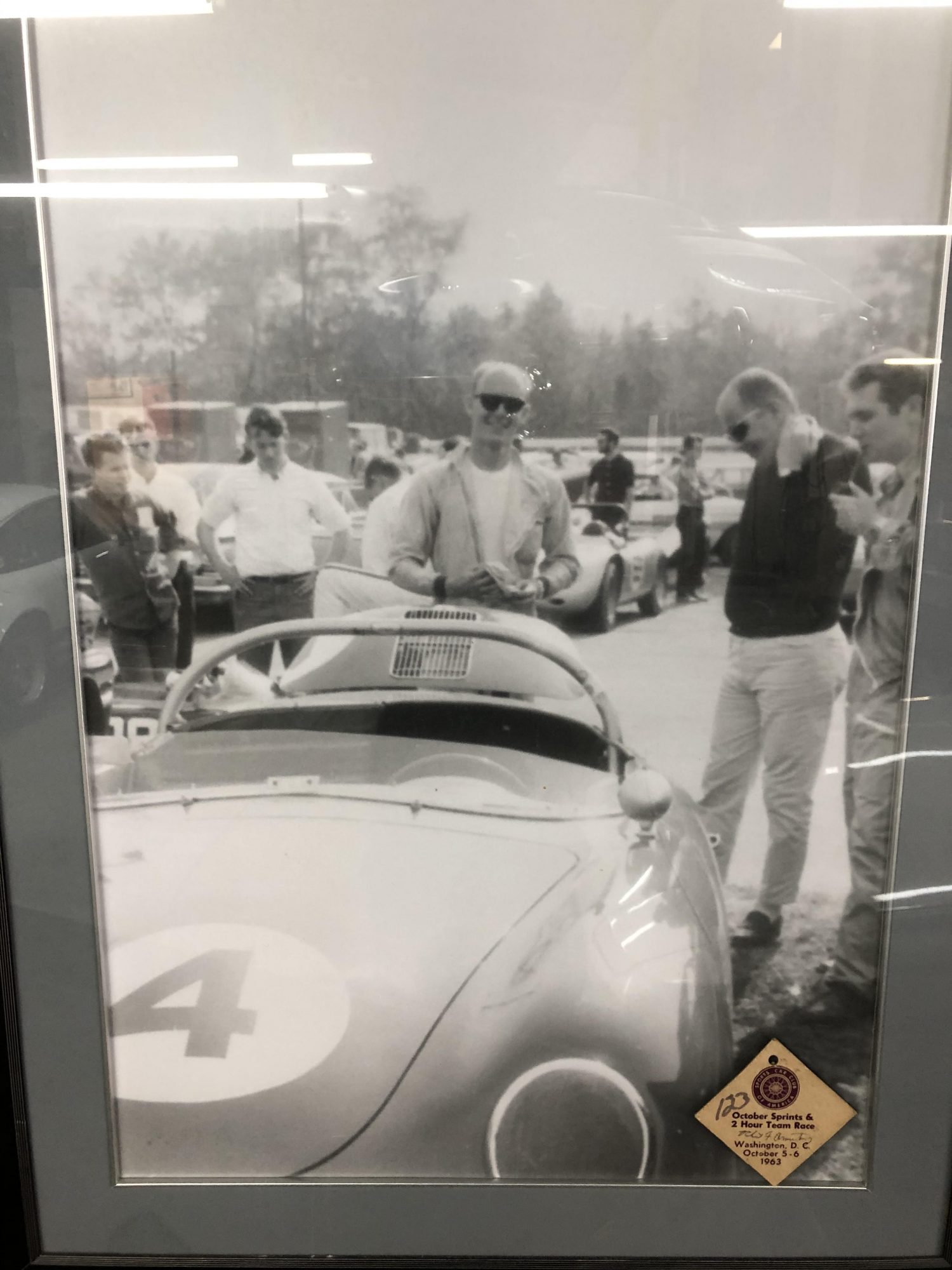 Some great historical photographs of the 356’s past with John and Chick.

The next owner was John Harter, a news broadcaster on Washington D.C.’s Channel 7 for many years, who started a car road test segment as a result of his collecting, racing, restoring, and enthusiasm for the automobile. Harter continued to enter the Speedster in racing and autocross events into the 70s but converted it back to somewhat of a road car, which meant reinstalling the factory windshield and seats. He painted the car silver with a black nose ala Bruce Jennings’ four-cam Speedsters. This paint was applied right over the red lacquer and is still present on the car in its current state. In 1979 Harter started to disassemble the car with plans to restore it and never got around to it, leaving the vehicle untouched in his carriage house in Washington D.C. until 2016. Sitting on the wall next to the car was a large black and white photo of John and Chick with the Speedster when it was red under Chick’s ownership at Marlboro with an RS60 in the background, presumably preparing for the same race. Next to that was displayed Stanton’s original notebook, which detailed the early history and mechanical setup of the Speedster. In 2016 Harter was dealing with health issues, so he and his wife started some estate planning, including parting with his beloved Porsche.

A local Italian bike collector, John Henry, found out about the car and made a deal with the couple, dependent upon an inspection by Porsche restorer Lewis Houser. Lewis has operated Karosserie for decades, an early Porsche Restoration facility in Northern Virginia. Stored at Karosserie from 2016 to 2021 (under John Henry’s ownership), the Speedster was mechanically sorted and put back on the road. After my dad and I first met John in the spring of 2018, we regularly spoke about the car’s history, its connection with Chick Stanton, and, therefore, racing, the Cannonball, and Heishmans. We often said to John how we would love to buy it one day and leave it exactly as is. The car retained its original black interior and the silver paint applied by Harter in 1969. I started to talk to John Henry more and more, and we quickly became good friends. Pursuing this car was a lesson in persistence. Ever since late 2019, John and I would chat on the phone almost once a week to check-in, discuss cars and life, and ask how the Speedster was doing. Throughout this experience, I frequently expressed my interest in the car, but he was always hesitant to talk about selling. Then, three weeks ago, something changed, and we got a phone call asking if we wanted to do the deal immediately. Of course, the only logical response was a resounding “Yes!”.

Currently, the car has a Bursch muffler, a factory Speedster windshield, and its factory soft top-mounted. Still, the center exit “Turtle Tail” race pipe, aluminum tonneau cover, and original racing roll bar are on the shelf and in similar unrestored condition. These components will be reinstalled to present the car in its most significant configuration. That first drive home on the Washington D.C. Beltway, famous for its rush hour traffic, was something of an ‘aha’ moment for me. It was the conclusion of a fantastic pursuit, and I look forward to further researching the car’s competition history and using it as intended by driving it at events worldwide. 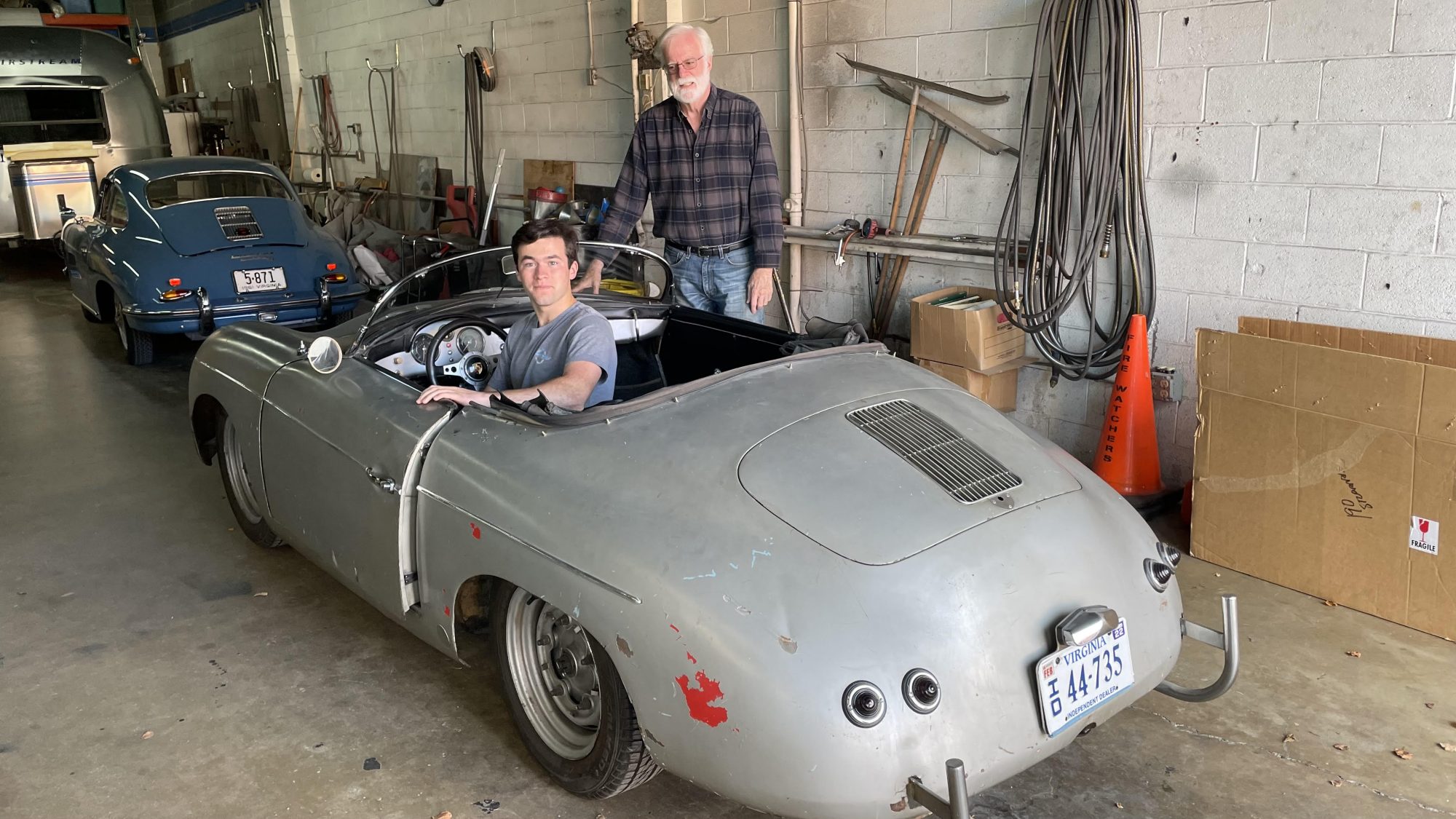 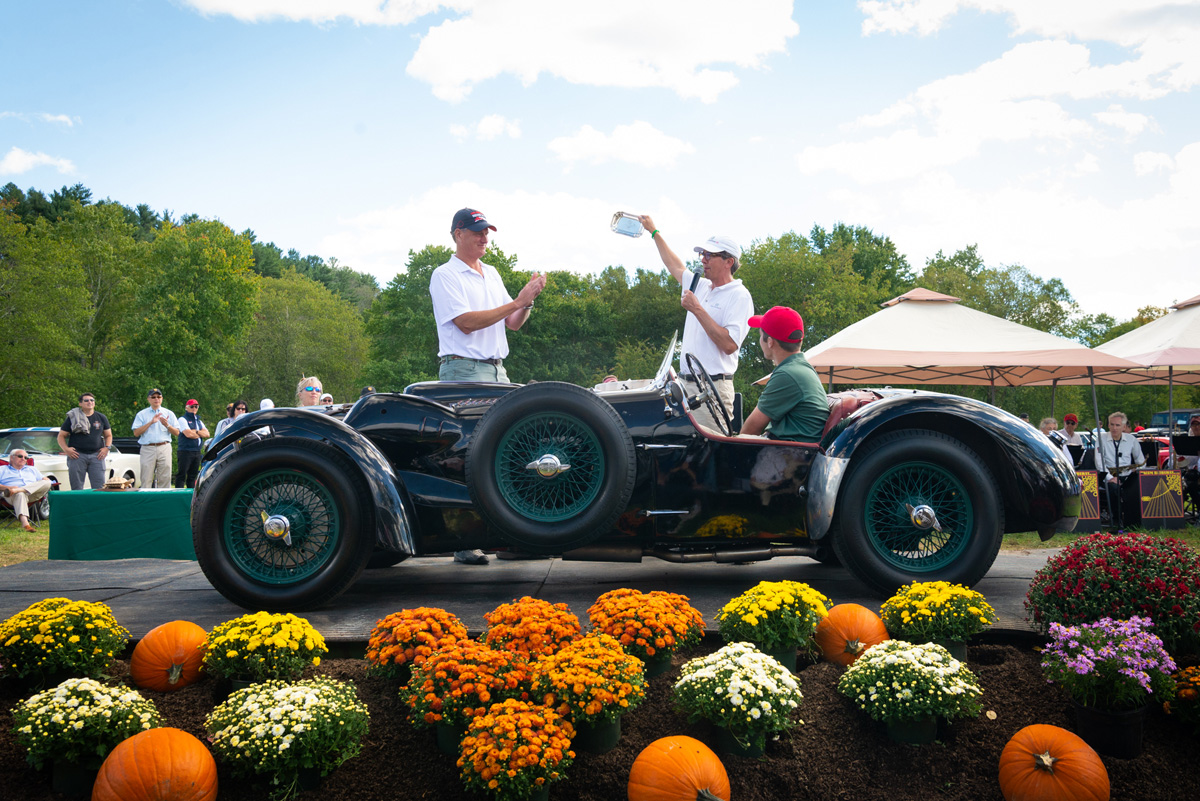 Showing off a decades-old Lime Rock Park trophy that belongs to this very Allard at the 2021 Turtle Invitational.

Philip Richter is President and co-founder of New-York-City-based Hollow Brook Wealth Management, LLC. The Turtle Garage Blog, he says, is dedicated to his "love of excessive personal transportation."
View all posts by Philip Richter →
2021 In The Rearview Mirror
Purple Porsches,Yellow Tulips, and Green Trillions

One Response to The Fantastic Pursuit of a Special 356 Speedster