By Philip Richter on August 2, 2015 in Cars, History, Travel

Sarah and I recently spent a week in Havana. Our timing for a trip to Castro’s Cuba could not have been better. My advice: drop everything and go to Cuba right now!  After all, the island is only a short 43 minute flight from Miami. Jet Blue now offers weekly flights from JFK. Our trip was planned and organized long before the momentous December 17th announcement by the Obama administration.

A beautiful city in ruins

We spent most of our time touring in and around the city of Havana.In a week we were able to gain a rich and comprehensive understanding of Cuba in transition.Today Cuba has to be near the top of the list of the most interesting places in the world. There are drastic social, political, and economic changes under way. Many of these changes are the result of outside forces that are out of the control of ordinary citizens. The difficult but predictable lifestyle that all Cubans have come to accept is in the process of being turned upside down. The recent agreement between the U.S. and Cuba brings with it unpredictable changes. These momentous changes are being forced upon a culture that has been locked in a bygone era of relative stability and isolation. Today the streets of Havana are alive with a heightened sense of hope and optimism. However, these positive emotions are intertwined with fear and worry of the unknown. The “normalization” of relations with the United States has far flung implications that are hard to quantify or predict at this point in time. The whole “normalization” process will likely take years if not decades. Regardless of the recent historic agreements, relations between America and Cuba may forever remain abnormal and strained.

The organizers of our trip were connected in Cuba. They enabled special access to people, places and things that the average traveler to Cuba would never experience. We enjoyed an insider’s tour of Ella Cisneros’s mansion in Miramar. Ella is one of the leading modern art collectors in the Carribean. We had tea at the U.S. Ambassador’s residence with Ambassador-elect Jeffrey DeLaurentis. Jeffrey gave us a behind the scenes view of the complex negotiations that had been going on for several years between Raul Castro’s government and the Obama administration. Months ahead of the public press we learned that a U.S. embassy would definately reopen in Havana no later than July 15th.

We toured the fabulous and opulent Italian marble graveyards in the center of Havana. We walked the romantic Malecón on Valentine’s Day. One night we went out to the Cuban Art Factory. This art venue was a hip and swinging scene where an art gallery and night club becomes one. The burgeoning art scene in Havana is thriving partly because art is not part of the U.S. embargo. Tourists can legally purchase art in Cuba and export it to the United States. We took a fabulous day trip to Viñales (about three hours west of Havana) and toured a tobacco farm. On the last day of our trip we visited Hemingway’s home located about 30 minutes east of Havana.

Cuba’s recent history is fascinating and complicated. The 1950’s was a period of heavy American influence on the island of Cuba. Meyer Lansky, Lucky Luciano, and other infamous American mobsters ruled the thriving gaming and hospitality industry of Havana. Batista’s coziness with the American mafia and growing corruption within his government helped fuel the fire for Fidel’s successful revolution in 1959. The 1980’s was a time of heavy Soviet support of the island. The Lada’s still running around Cuba are a reminder of the Soviet era. The years from 1982 to 1988 are considered the hay day of Fidel Castro’s rule. These halcyon days coincided with the zenith of Soviet influence on the island. After the Berlin Wall fell, Cuba entered the “Special Period” where energy and food was severely rationed. During this period most cars were put on blocks and stored. To combat the energy crisis, the Cuban government purchased 500,000 bicycles from China. Bicycles were a desperate attempt to solve Cuba’s growing transportation problems. We learned that after Soviet support of Cuba collapsed, dogs on the streets of Havana were in danger. Many poor pooches were literally eaten by starving Cubans. By the end of the 1980’s, the Castro regime had grown to rely too heavily on Russian financial support. The fall of the Soviet Union brought on a very dark period in Cuba’s history. In the 1990’s, Venezuela’s Hugo Chavez finally stepped in and threw the Castro’s a lifeline.

You can browse my wife’s blog at www.grappalane.com. Sarah did an extraordinary in-depth four part series of our trip. Sarah is a talented writer and (as it turns out), a photographer extrordinaire. From a literary and photographic perspective, her extensive blog series could have come straight out of National Geographic. She also produced a separate photo portfolio that can be accessed here. The essays can be read here and you can click through to the subsequent entries.

Sarah in a doorway in Havana

I was drawn to the thriving automobile culture in Havana. It was clear that islanders feel a strong sense of pride in their automobiles. This pride is probably partly driven by the fact that owning a car in Cuba is an enormous privilege. We saw many cars being hand washed and lovingly repaired on the streets of Havana. For the most part cars appear meticulously maintained by their owners. The automobiles on the roads of Cuba are themselves a rolling history of Castro’s regime. These automobiles owe their very existence to Fidel Castro and the isolationist policies that both the U.S. and Cuban governments have persued. It is a surreal juxtaposition that American metal from the 1950’s shares the roads with Russian Lada’s from the 1980’s. Cuba is an automotive melting pot!

Philip outside the Hotel Saratoga in a 1950 Cadillac Series 61

Today there are only a few late model luxury cars on the road in Cuba. The high cost of new vehicles combined with the complexity of the importation process under the U.S. embargo has kept a lid on fancy cars entering Cuba. There are several modern Korean and Japanese microcars driving around Cuba, but after a week of looking I only saw one ten-year-old Mercedes S class, one five-year-old Audi A4, and one current BMW 5 series.

The Cuban people are very creative and resourceful. Keeping these old American cars running over the last fifty years has been a feat of ingenuity. How they keep Russian Lada’s running I don’t know! It is almost impossible to get proper replacement parts in Cuba. As such, most of these 50’s cars are no longer running their original Detroit-built V-8 gasoline engines. Instead, Korean diesels and Ford tractor transmissions keep big heavy American cars going today.

One of the highlights of the trip was an afternoon touring Havana with Nostalgic Cars. Nostalgic Cars is Cuba’s first (post-Revolution) private car company. Owned and operated by Julio Alvarez and his wife, its really quite an impressive operation. Julio and his wife have a modern workshop where they restore cars. They also have a tour business that uses their restored cars to ferry tourists around the city. You can see NPR’s article on Julio and Nostalgic Cars here. 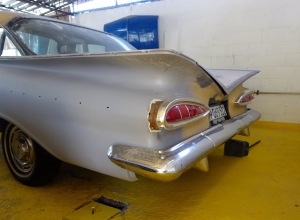 1959 Impala being restored at Nostalgic Cars 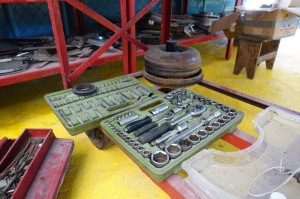 The shop of Nostalgic Cars

On our trip I learned that many of Cuba’s “restored” cars are considered by their proud owners as “inventions.” One taxi driver called his car a “bulldozer” because it was running a 3-speed tractor transmission.

It was hard to leave Cuba without being emotionally impacted by all that comprises its past, present, and future. Cuba is a paradox. It is a depressing and sad place when you consider what the Cuban people have lived through. Yet somehow Cuba is also a hopeful and happy place. Cubans seem to be very content people who are at peace with themselves and their place in this world. Leaving the island for the fast lane of modern Miami evoked deep emotions that are hard to define and impossible to explain. Without question, our vistit was the trip of a lifetime.

The following is a series of photographs of the cars of Cuba and the friendly people who drive and maintain them: 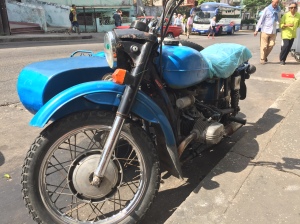 This Cadillac was quite an unusual sight….a wagon of sorts. 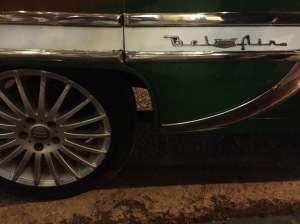 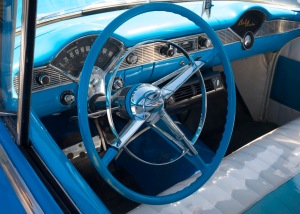 An interior from another age, restored by Julio and his team at Nostalgic Cars.

A street in Havana 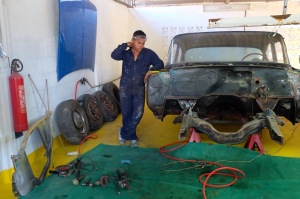 Sarah took this photograph of Fidel peeking over the bumper and parts of an old car in the restoration shop at Nostalgic Cars. 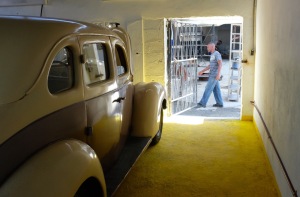 A late 30’s Ford awaits some work at Nostalgic Cars

A Soviet style limosine in Viñales

There is a strong pride of ownership tied to the Cuban car culture. We saw a lot of cars being washed and cared for.

This is a photo of a photograph that was hanging on the wall at Sloppy Joe’s, a famous restaurant in Havana. The car is a 1930 Stutz parked on the streets of Havana. 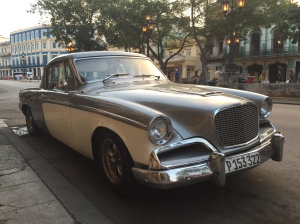 An old Studebaker Hawk in Havana. 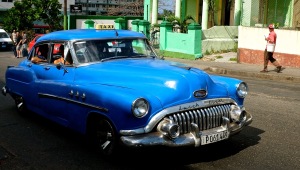 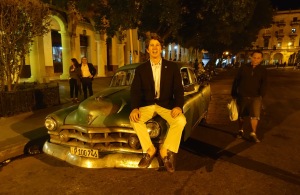 Philip with a Cuban style microcar

A BMW 5 series next to a Lada on the Malecon . 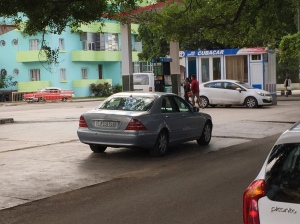 The one and only S class Mercedes seen in an entire week of car peeping. 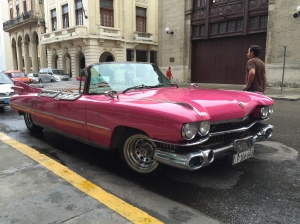