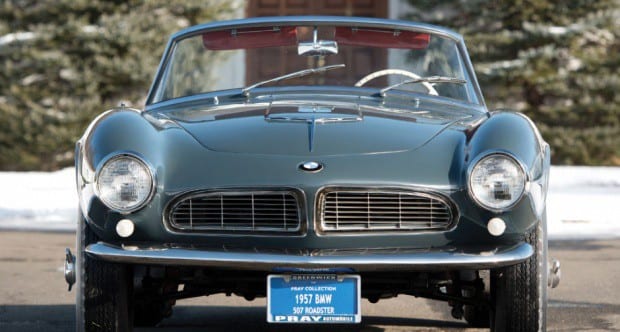 The 507 is the most significant BMW ever produced. It is also arguably one of the most beautiful vehicles of the post-war era. Max Hoffman convinced BMW to build the eight-cylinder 507 as an alternative middleweight to the high priced six-cylinder Mercedes 300 SL and the cheaper British sports cars of the era. Designed by Albrecht von Goetz, the distinct 507 roadster has a long hood, raked windshield, and flowing feminine lines.

European car importer Max Hoffman had hoped to sell 5,000 cars a year at a price of $5,000. Production problems and cost overruns ultimately doubled the list price to $10,500—the equivalent of $100,000 today. The pricey 507’s were mostly owned by celebrities like Elvis Presley and famous race drivers such as John Surtees. Ultimately, the hand-built aluminum-bodied 507 proved far too expensive and complicated to manufacture. Only 252 of them were produced over a two-year period. The mid-1950’s was a time of financial stress at BMW, and the development of the 507 almost bankrupted BMW. The 507 never earned a racing pedigree like the Mercedes 300 SL; however, today it remains a landmark car that enjoys iconic status among enthusiasts and collectors.

I was fortunate to have many hours of priceless seat time behind the wheel of Malcolm Pray’s 507. Together we took his car to shows across America, and we frequently drove it around his hometown of Greenwich Connecticut. Malcolm bought the car in 1972 from the original owner and kept it until his death in 2013. As a trustee of Malcolm’s estate, I helped sell several vehicles out of his world-renowned collection. In 2014, Malcolm’s 507 sold at RM’s Amelia Island auction for a record $2,250,000. His car had the ultra-rare Rudge knock-off wheels and the original optional hardtop. Only eleven 507’s were sold with a hardtop. Since the 507 was a handmade aluminum car and no two of them are the same, each hardtop only fits the original vehicle.

507 pricing momentum continues into 2018—the BBC just announced the sale of John Surtees’s 507 for over 4 million pounds at Goodwood (the equivalent of about $5 million). The Surtees car is a unicorn in the sense that it was a one-owner car with only 40,000 original miles and was the property of one of the greatest car and motorcycle racers of all time.

I expect 507 prices will only continue to rise in the decades ahead. The 507 offers unparalleled style and rarity and checks all the boxes—it will continue to occupy the very top of the collector car pyramid. Both the Pray and Surtees cars commanded a premium in the market because of their strong provenance and long-term ownership. The 507 is a timeless car with a bright future in the collector market. Watch the 507 continue to appreciate dramatically in the years ahead.

The “very, very special” 1957 BMW 507 Roadster, which was owned by Surtees from new, was auctioned by Bonhams during the Goodwood Festival of Speed. Surtees is the only man to have won grand prix world championships on both two and four wheels. He bought the car with money that was given to him as a reward for taking his first motorcycling world crown. Surtees won 500cc motorcycling titles in 1956, 1958, 1959 and 1960 – and the F1 crown in 1964.

A Bonhams spokesman said: “He used this graceful grand touring car extensively, often driving over the Brenner and Simplon passes on his way between England and Italy.”This is not only a beautiful example of BMW’s most elegant and refined sports car from the 1950s, it is very much ‘the John Surtees BMW 507’.”

The car – which fetched £3,809,500 – was sold with a letter dated 10 February 1959 from MV Augusta motorcycles, to whom Surtees was contracted at the time. It reads: “This letter is to confirm that on the 12th January, 1957, we presented to you an amount of DM 27,115.00 for you to buy a BMW type 507 Touring Sports car which was intended as a gift to you in appreciation of your winning the Motorcycle World Championship in 1956 for our company in the 500cc class. “We want to mention here the fact that the above World Championship in the 500cc class was the first ever achieved by this company, and the above was but a token of our sincere gratitude.”

Another document included with the sale was a note by Surtees in which he wrote: “A car with many memories and one where purely its original specification makes it very, very special.”

It is safe to say that Malcolm Pray was among the 507’s admirers when it was first offered, which was about the same time that he was getting his own start in selling German automobiles. He was further influenced by an encounter with a fellow Greenwich resident, Al Mitchell, who was an airline pilot who happened to own a 507.

After an inquiry from Pray, Mitchell located this car in Pennsylvania, still with its original owner, Alan Friedland. Friedland was an enthusiastic participant in Sports Car Club of America races during this era. Surviving records indicate that Friedland drove his 507 in the Northeast Ohio Regional Races of the SCCA. The car was purchased by Mr. Pray, who became its second owner, on August 17, 1972, and he would never sell it.

In the 1980s, the interior was reupholstered in red Connolly leather, new Wilton wool carpeting was installed, and the interior wood was replaced or repaired as necessary. In 1997, the 507 underwent more significant work, with all trim removed, repaired and reinstalled. In 2006, the body was stripped, minor scratches and dents were repaired, and all panels were refinished in Graphite.

The Pray 507 was equipped at the factory with a Becker Mexico radio, as well as with two of the most desirable items: Rudge wheels and a removable hard top. The 507’s original 155-hp Series II engine, number 40167, was recently offered to the Pray Estate. Its authenticity to this chassis was confirmed by the 507 Registrar of the Historic BMW Club Germany, Wolfgang Niefanger, and BMW Classic. The original engine was acquired, fully rebuilt, and is now offered with the purchase of the car. 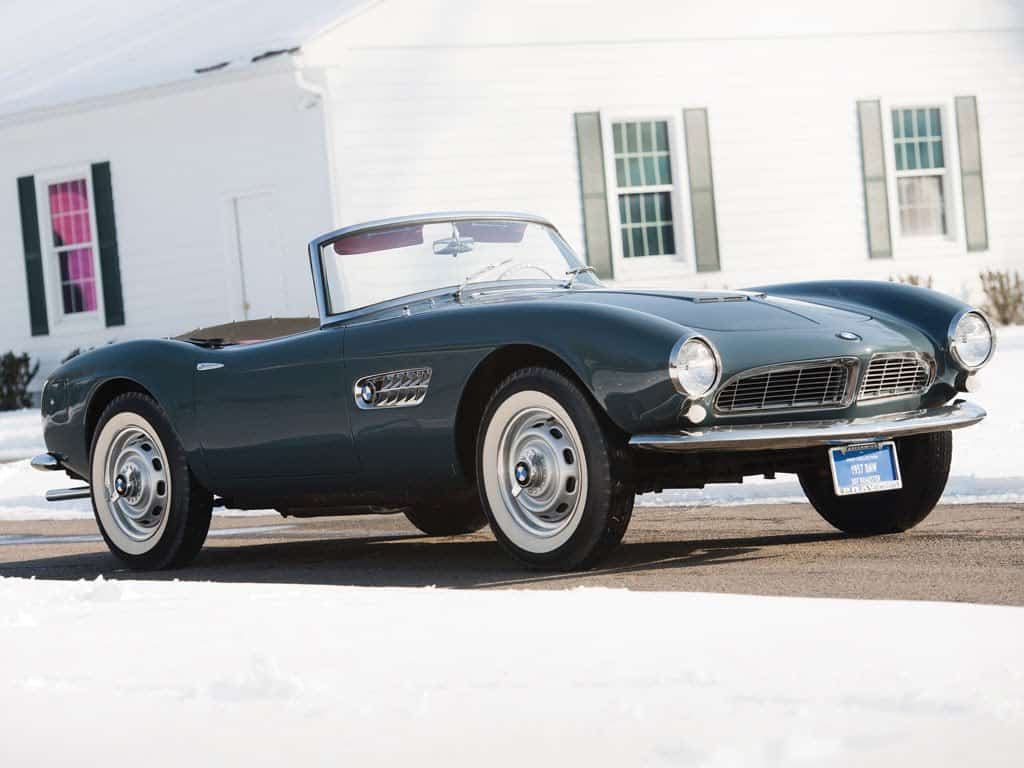 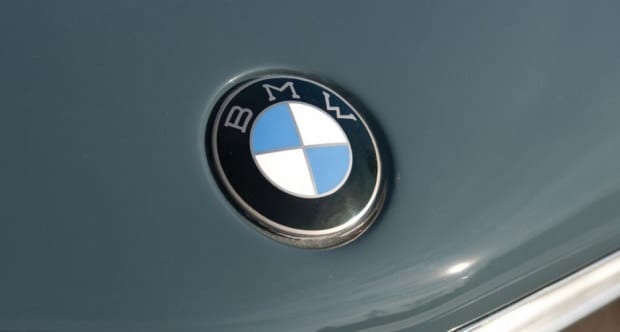 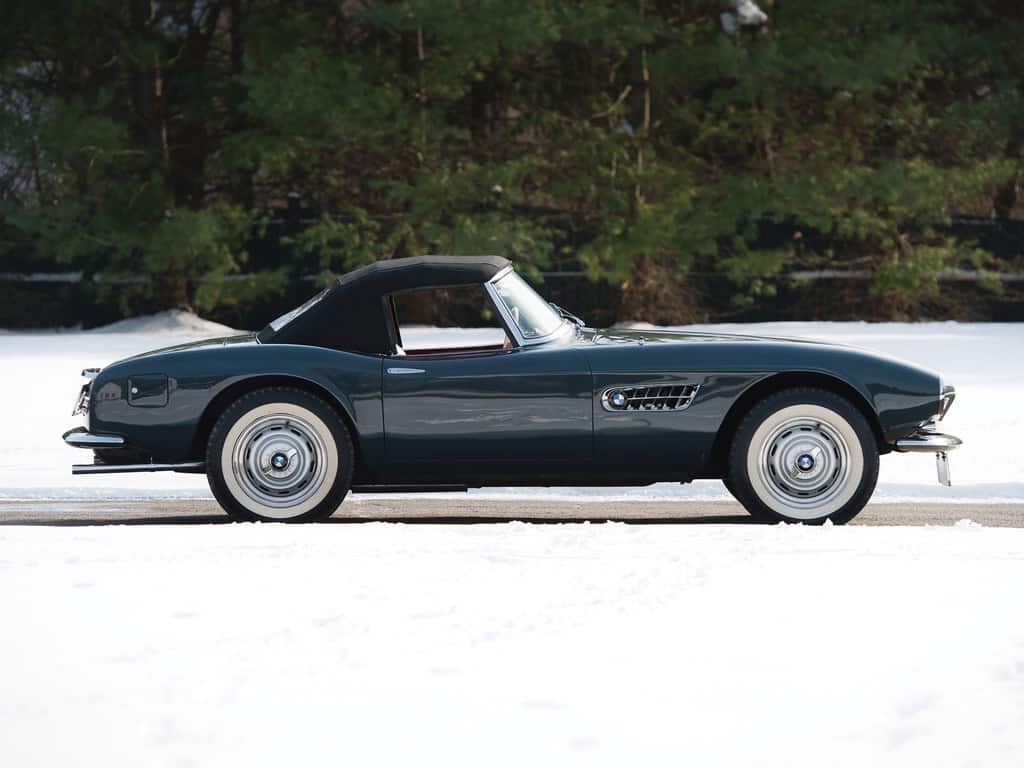 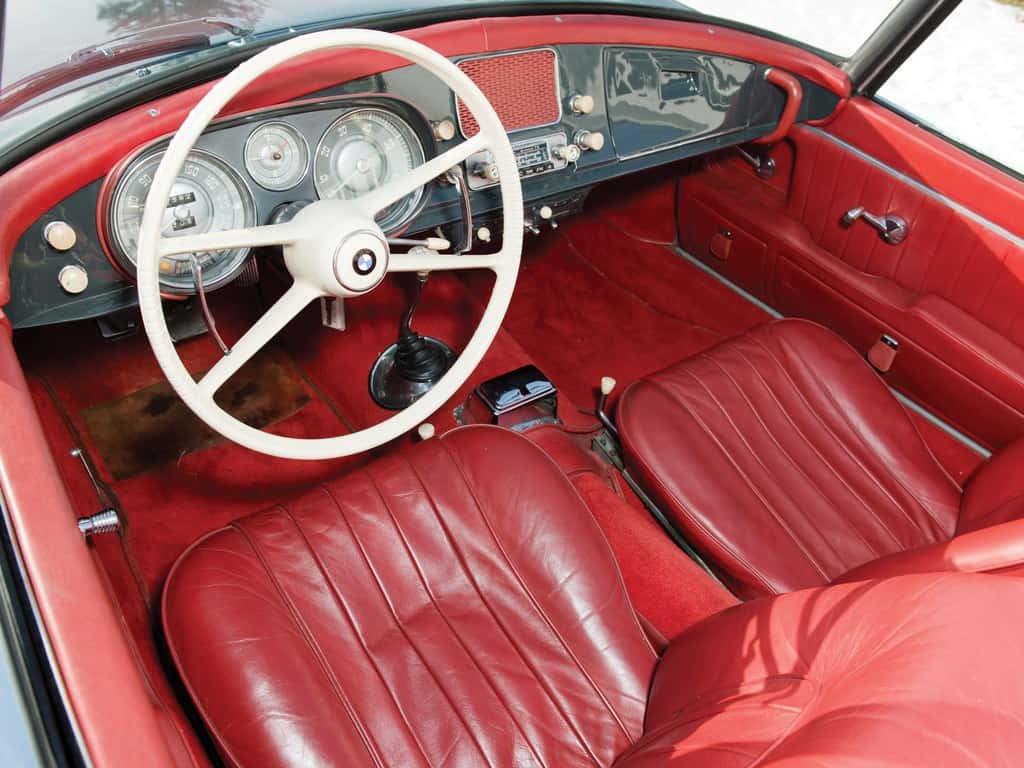 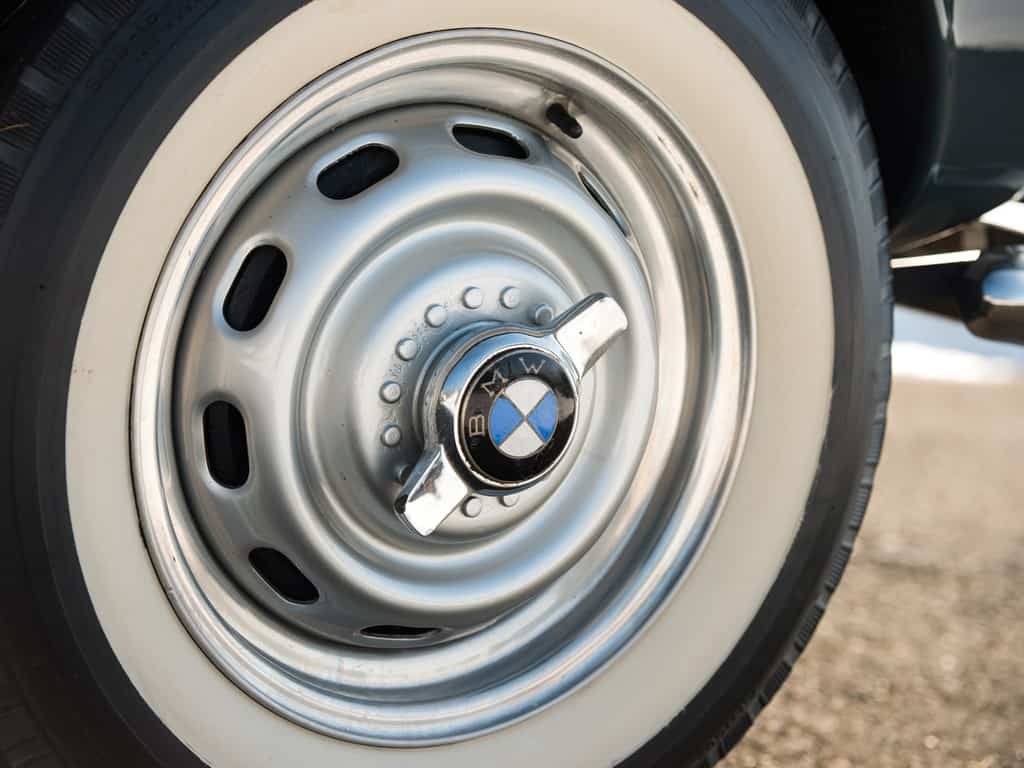 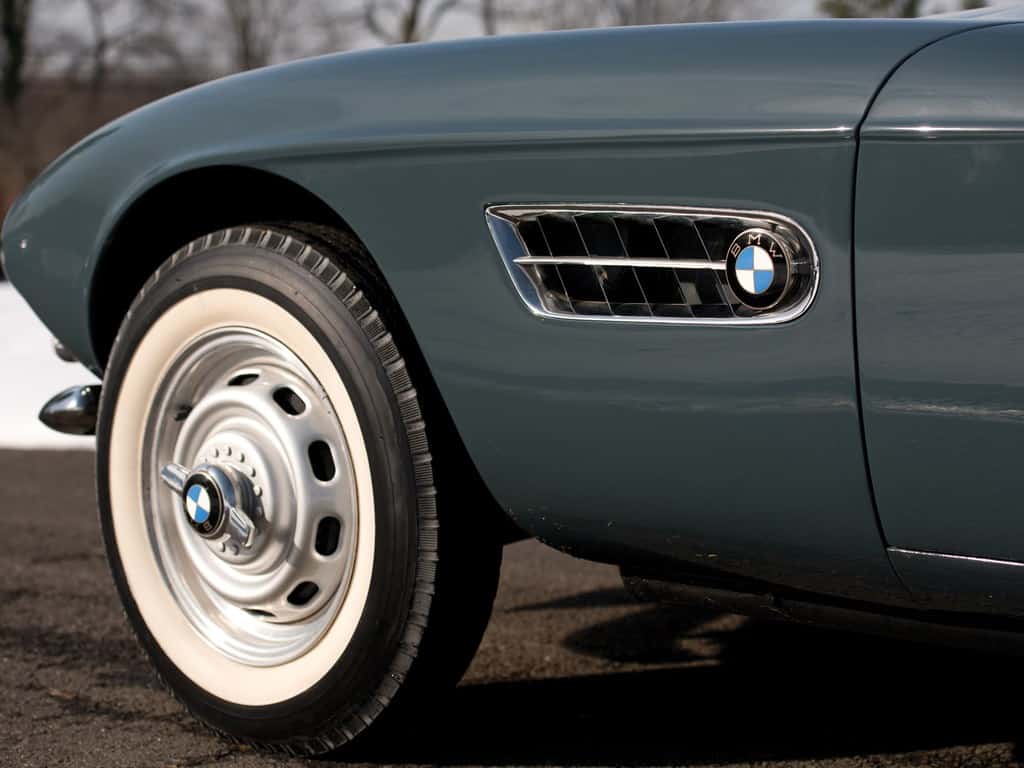 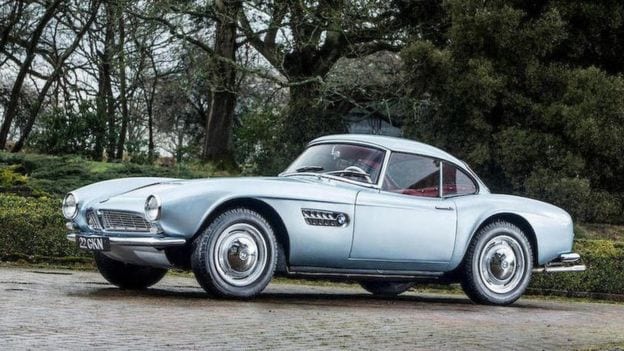 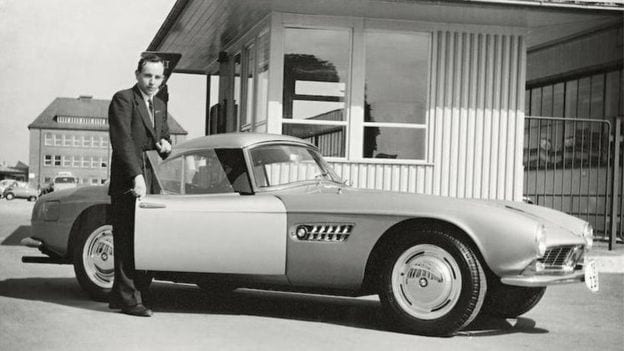 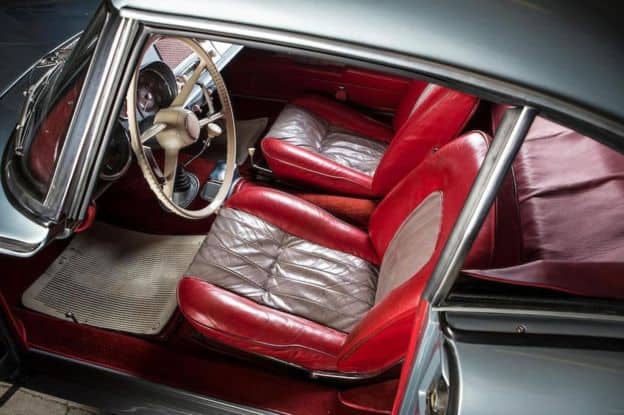 Philip Richter is President and co-founder of New-York-City-based Hollow Brook Wealth Management, LLC. The Turtle Garage Blog, he says, is dedicated to his "love of excessive personal transportation."
View all posts by Philip Richter →
If You Don’t Read Another Book This Year….
Automotive Legend Sergio Marchionne is Dead at 66