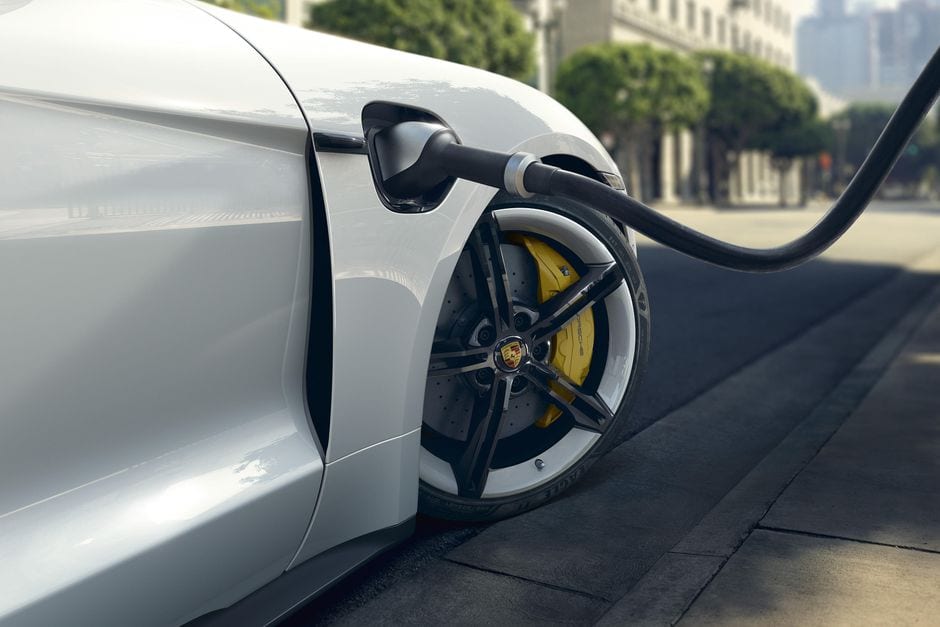 By Philip Richter on January 26, 2020 in Cars, Electric Cars

“Sure, owning an electric car may make you feel good. That you’re doing your bit for the planet, but as it turns out, unless you’re planning to drive one to obsolescence, while using clean power sources, they might not be the best option to ensure Mother Earth’s survival today.”  —Financial Times, January 24th 2020

A recent article in the Financial Times highlights the complexities behind the debate between electric vehicles and traditional internal combustion cars. Are you saving the earth by driving a Tesla? The answer is complicated. As auto manufacturers like Daimler and Toyota drop everything and invest the lion share of their R&D into electrification, the debate over electric vehicles becomes even more critical.

The following brief article is perhaps a simplistic look at this complex topic; however, it does make the important point that one must look at the entire lifecycle of an automobile to determine its actual carbon footprint. We have been arguing for years that the full “cradle to grave” carbon impact is the proper measurement. For example, current battery production processes today are very energy-intensive. Power supplied to charging stations in Chicago have very different sources of energy sources (coal) than say Florida (NextEra in Florida has invested heavily in natural gas, wind, and solar infrastructure). Finally, what is society to do with the volume of used batteries when they fail to hold a charge years ahead in the future? The existing power grid will struggle to handle millions of plug-in cars unless a massive investment is made into the power infrastructure. Crucial inputs for battery production like nickel, lithium, and cobalt are complex to mine and large scale extraction processes can be very invasive to the environment. In the meantime, the traditional internal combustion engine has become much cleaner and more fuel-efficient. Whatever side of the fence you are on, the answers are not simple. The following article provides a thoughtful platform for debate on this complex topic.

REPRINTED FROM THE FINANCIAL TIMES

What would be your immediate answer to this question: what has a lower carbon footprint — a diesel car or an electric car?

No looking now. All right, had a guess?

Like FT Alphaville, you probably guessed an electric car. However the answer, like most things in life, is less clear than that. In fact, according to Volkswagen, the answer is really “it depends”.

We came across this graphic from 2019 which the €88bn Wolfsburg-based automaker released as part of the marketing for its new e-Golf. It sort of blew our minds: 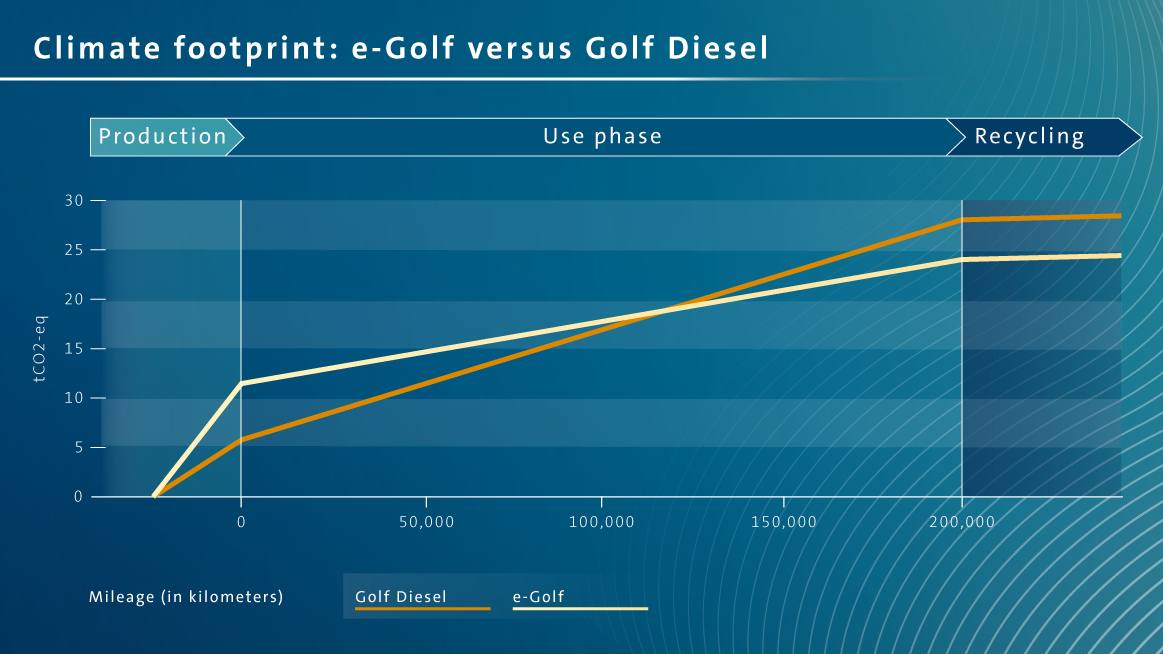 Yep, that’s what VW estimate the carbon footprint is for its new e-Golf, versus its diesel equivalent. The most striking thing is that, due to the energy intensive nature of battery production, it takes roughly 120,000 kilometres of use for the e-Golf to have a lower emissions.

Of course, it does depend on where the electricity used to charge the car comes from. But VW addressed that issue too: 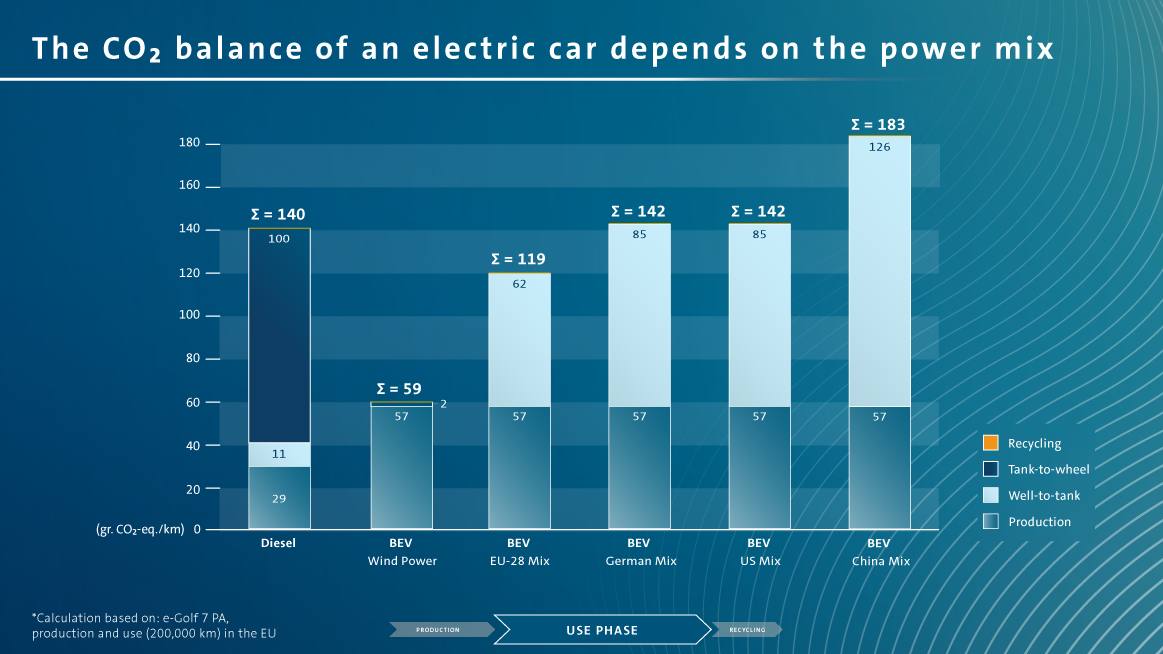 Mazda have made similar noises about the relative carbon output of electric cars, according to Tesla’s proxy investor relations website Electrek.

A few points to be made here. First is that carbon emissions are not the only negative externality that electric vehicles mitigate — they also reduce air and noise pollution, which have a detrimental effect on many things, from house prices to health.

The second point is to be made is that battery technology is still incredibly inefficient to manufacture (it makes up 43.25 per cent of the e-Golf’s total carbon footprint) as we should expect this to improve as technology improves, although perhaps not at the rate of Moore’s law.

A final observation here is that, as Emissions Analytics — a leading consultancy — have argued, hybrids are the best means we have right now to reduce carbon emissions. From the its newsletter (with the associated table):

The table above shows that mild hybrids are clearly the most efficient method of CO2 reduction, followed by full hybrids, given scarce battery production capacity. Plug-in hybrids are the next most effective after that, but only if they are operated entirely on battery, which is hard to enforce in practice. BEVs have the lowest efficiency, primarily due to requiring disproportionately large batteries to accommodate relatively infrequent, extreme usage cases where the driver will otherwise suffer range anxiety.

Emissions Analytics to go on to argue that incentivising the uptake of hybrid tech allows time for countries to develop the necessary infrastructure for electric cars — whether it be in the form of cleaner power sources, or mitigating the various supply chain issues of battery tech — so emissions goals can be met by 2030.

Sure, owning an electric car may make you feel good. That you’re doing your bit for the planet, but as it turns out, unless you’re planning to drive one to obsolescence, while using clean power sources, they might not be the best option to ensure Mother Earth’s survival today.

We realise this is a relatively simple overview, so thoughts from informed readers are welcome below. But please, no EV fanboys.

Philip Richter is President and co-founder of New-York-City-based Hollow Brook Wealth Management, LLC. The Turtle Garage Blog, he says, is dedicated to his "love of excessive personal transportation."
View all posts by Philip Richter →
Carlos Ghosn: Former Nissan CEO is a Man on the Run
1990 Mercedes-Benz 190E 2.5-16 Evolution II

2 Responses to The Electric Vehicle Debate: Complex and Unclear