Because I lived in the city over the last decade, I did not own a daily driver. The recent move of my office out of the city put me on the hunt to find a practical car that I could use on a regular basis. Over the last three weeks, I’ve had the pleasure of driving during rush hour, and it is nothing like I remembered. Like Han Solo coming out of carbon freeze, I’ve awoken into a world of insane levels of traffic and careless, distracted drivers. In less than a week, I’ve had multiple drivers come straight at me over the double yellow line. These incidents were like a game of chicken except the other driver had no idea they were on the wrong side of the road. I have a newfound perspective of the distracted driving epidemic. In short, driving on the congested and under-maintained roads sure seems more challenging today than it was a decade ago. More cars, more distractions, and worse infrastructure equates to more danger. Maybe its a sign I am getting older, but a desire for a safe vehicle has suddenly moved up on my priority list.

Over the last decade, I have not paid much attention to new cars. Back in 2006, I let my subscriptions to Car and Driver, Motor Trend, and Automobile expire. Since I did not need a practical daily driver, my focus turned to classic cars. I am now a full-fledged classic car guy. The extent of my driving over the last decade comprised of very light use of collector vehicles on fair weather weekends.

I did a lot of soul searching and performed in-depth research into the vast car options before me. I looked at new cars and used cars. I thought about a wagon. I thought about a sports car. I thought about a convertible. I considered a sedan. I needed to settle on being somewhat practical so a used Porsche 911 would not fit the bill. I needed something that was comfortable, fast, safe, and competent. I also wanted something with all-wheel-drive. Audi builds a great car, but for some reason, none of the current models spoke to me.

What I ultimately found surprised me. Many well-equipped middle range vehicles in the new car market start at well over $40,000. A new Honda Civic is now over $20,000. Some cars, like the new Chevrolet Suburban, top $70,000 when optioned with necessities. Welcome to the new real world of the modern day automobile—$55,000 is the price of entry for an Audi A6.

I called my longtime friend Scott Coleman for some advice. Scott owns Contemporary Motor Cars, one of the leading Mercedes-Benz dealerships in the United States. He said, “Philip, dollar for dollar nothing beats the S-Class. I can find you a great one that is coming off lease!” I pushed back and told Scott that a six-figure S-Class was way out of my budget and was a car for my grandfather. I had always considered the S-Class as an old man’s chauffeur driven car (you see dozens of black S550’s all over Midtown). He emphatically told me nothing could be further from the truth. An S-Class off lease is as affordable as a brand-new middle tier luxury car.

The W222 Mercedes-Benz S-Class is without question one of the best-engineered cars on the road today. It is advanced, powerful, safe, comfortable, and practical. This large car is a chameleon—it is a capable sports sedan, a luxurious limousine, an autobahn missile, a nimble backroad machine, and a competent sports car all rolled into one. For a car of its size, the S550 is materially more fuel efficient than an SUV—the ultra advanced twin-turbo motor can achieve close to 30 MPG on the highway if driven gently. Like the old stately Bruno Sacco-designed W126 S-Class series of the 1980’s, the current generation car is distinctly an S-Class—but its modern and the lines are clean. The W222 S-Class is much sportier than the prior iterations. The car is now targets a younger demographic and is no longer a stodgy luxury liner. Indeed, the current-generation S-Class has morphed into a true world-class sports sedan.

The W222 is a drivers car that you can also be driven in all over Manhattan. It is capable of driving and parking itself. The autonomous technology is arguably better than Tesla’s AutoPilot. The S-Class has soft pull doors and a vast backseat that welcomes occupants. While the standard rear seats are fantastic, the optional upgrade package takes comfort to another level.

Scott found me a 2015 black on black S550 4Matic very well optioned with just 20,000 one-owner miles. He leased this car new to one of his closest friends who just turned it in. The passenger and rear seats are unused. The car spent its life in a garage. It was properly serviced at his dealer and has had no paintwork. This particular 550 checked all the boxes of a like-new 20,000-mile S-Class. The factory warranty is good for another three years with the option to extend it in the future. While I would prefer silver, the car looks best in a darker color. The S550 looks handsome (if not serious) in black.

After one short drive, I can tell you that I’d much rather have a 20,000-mile S-Class than a brand-new anything else. Once you drive this car, you will never go back. Sure a Bentley is a great car and well appointed—but from an engineering perspective it is not even in the same league as the silky-smooth bi-turbo S550. As Scott pointed out, there is no reason to upgrade to the AMG versions (the S63 8-cylinder or S65 V12 AMG versions are available) because the current car makes 450 hp and is so capable and comfortable. The AMG cars ride harsh and are prone to rim damage when driven over modest potholes. As a a car to use everyday, Scott recommends to forgo the AMG upgrade. The logic goes that if you are going to have an AMG car, use it on the weekends and keep the doors limited to two. Today’s S550 is way more car than the highest-end AMG S-Class of a decade ago—its way more power than most people could ever use or need.

Whenever I get in the car now I hear a voice say, “Lord Vader, your Benz is ready…..” So if you are in the market for a new car and want a creative alternative take a look at an off lease S550—you just might be very surprised. 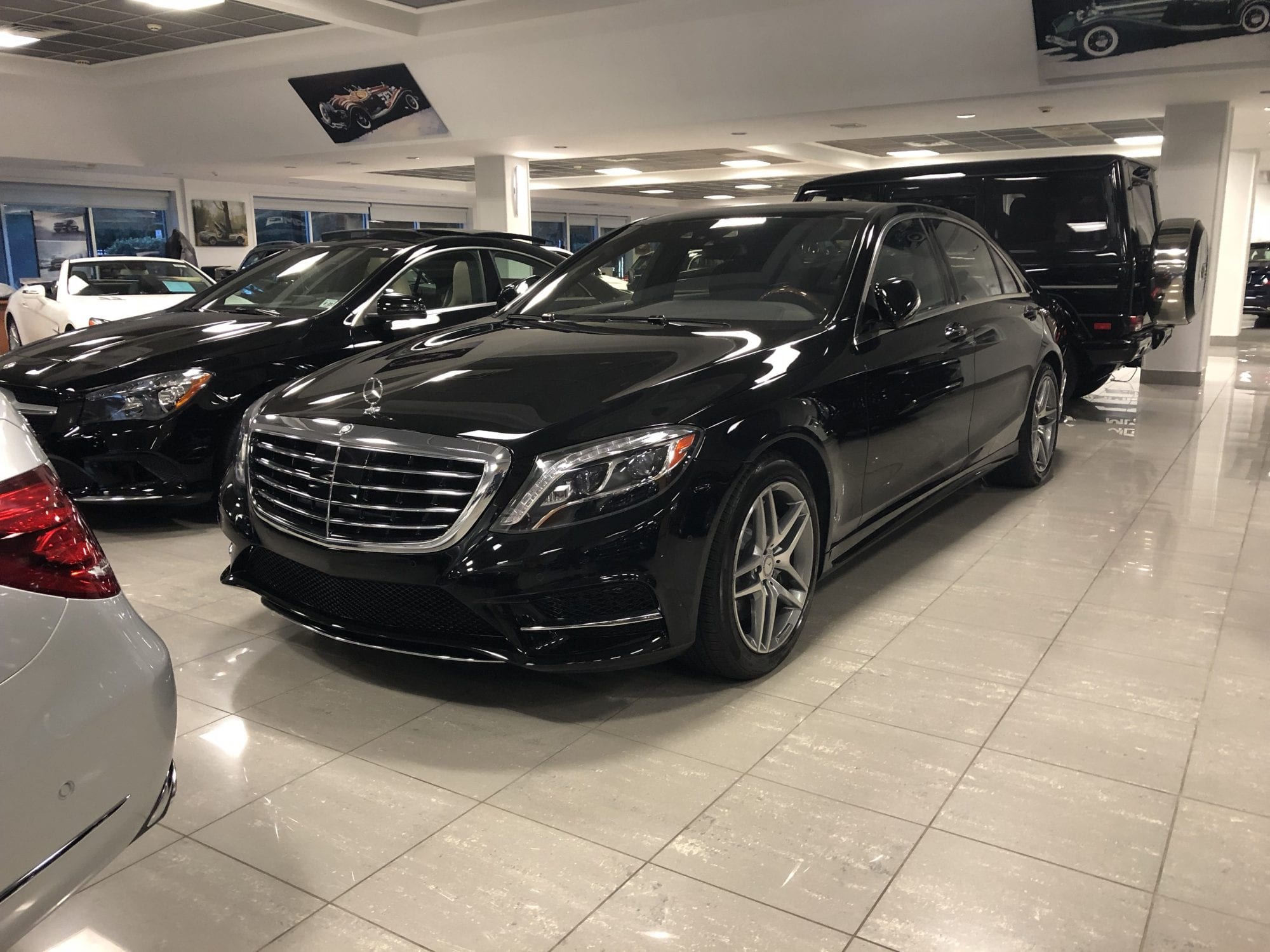 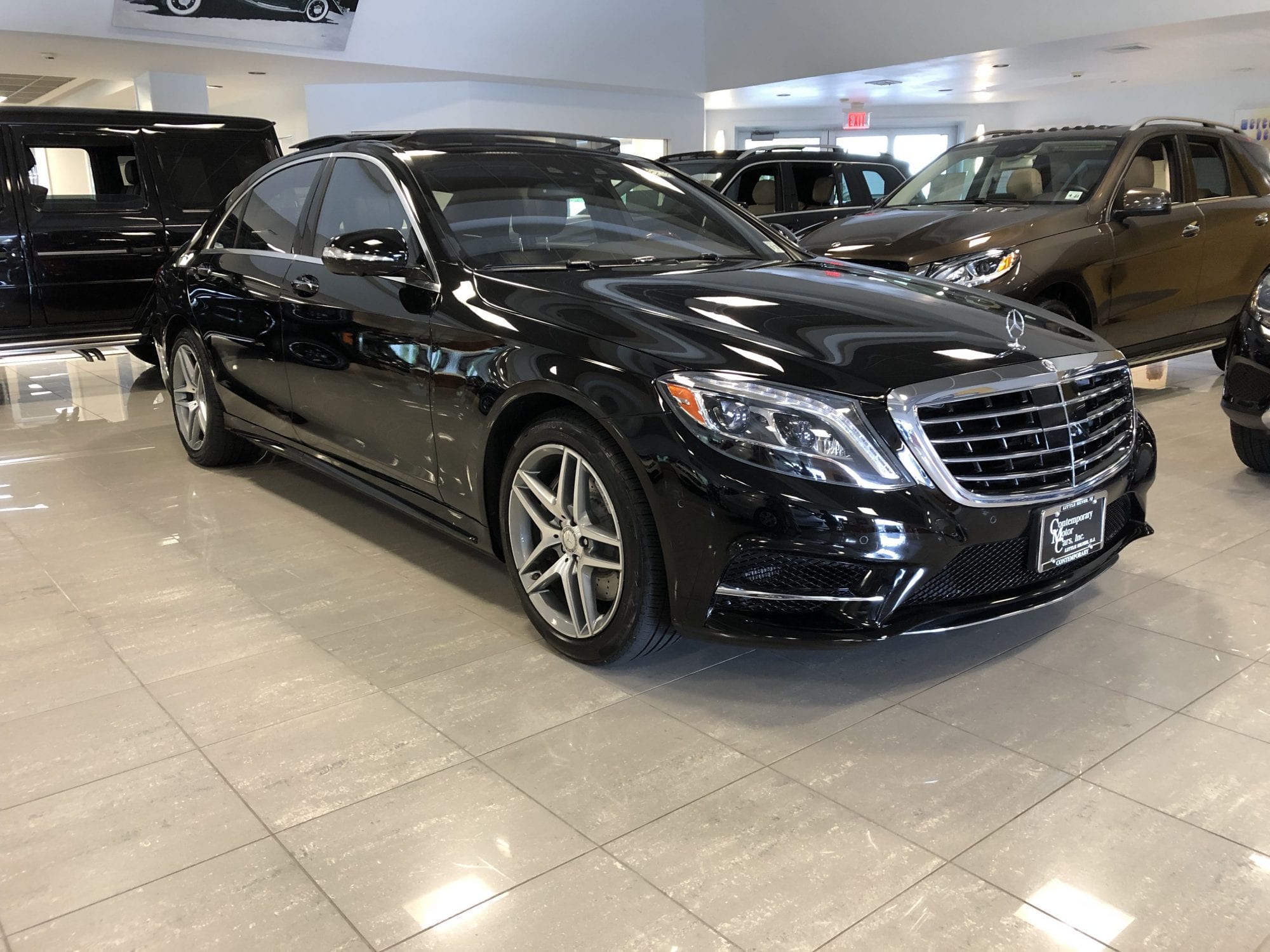 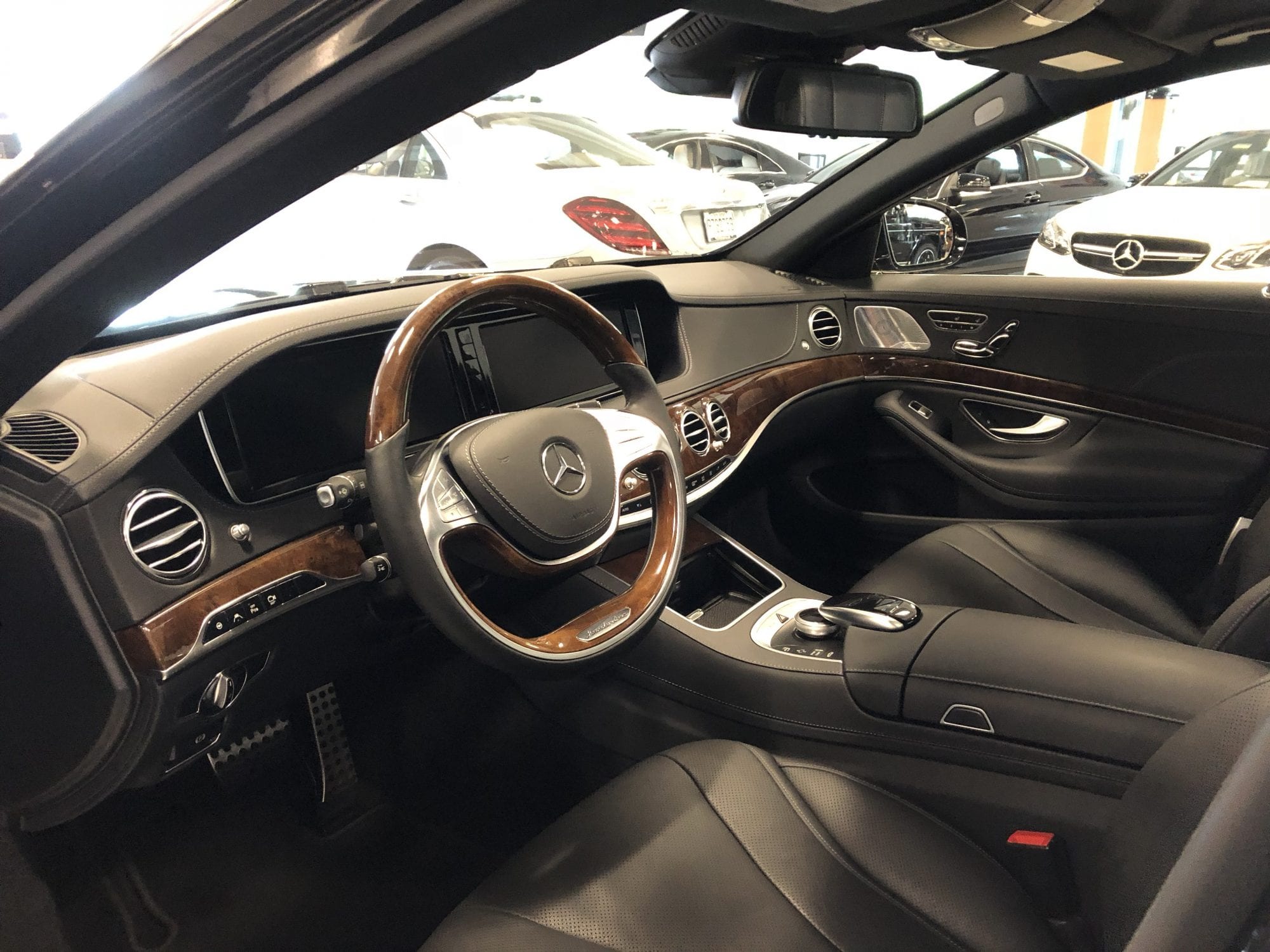 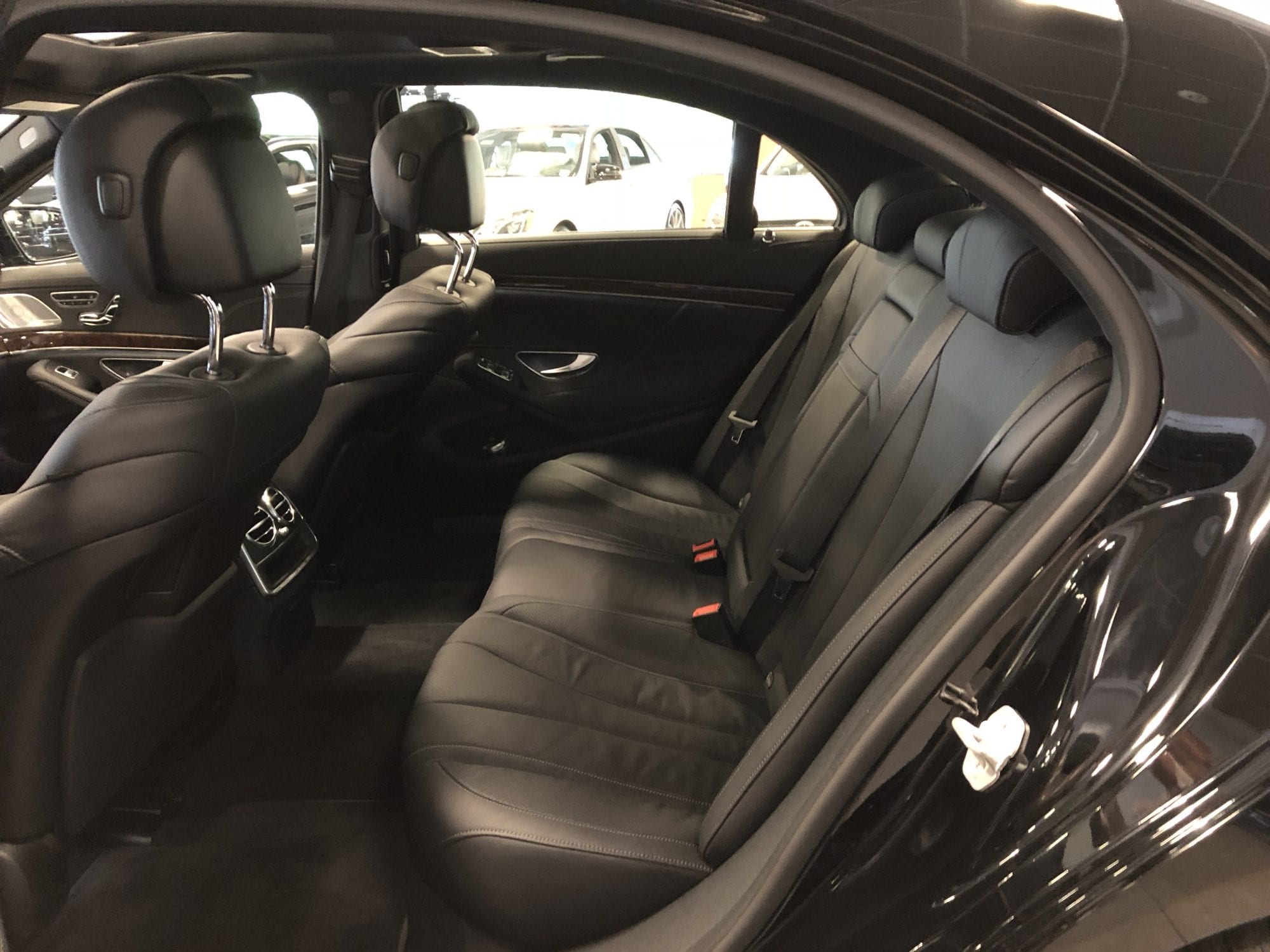 Luxury but without the optional rear seat package.

Philip Richter is President and co-founder of New-York-City-based Hollow Brook Wealth Management, LLC. The Turtle Garage Blog, he says, is dedicated to his "love of excessive personal transportation."
View all posts by Philip Richter →
1984 Renault R5 Turbo 2: A Steal!
The Origin of Ferrari’s Prancing Horse

5 Responses to The Mercedes S-Class: An Off Lease Bargain