By Philip Richter on May 8, 2016 in Cars, Restorations 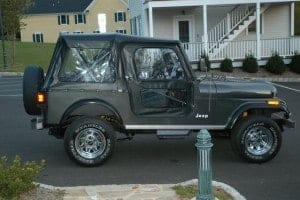 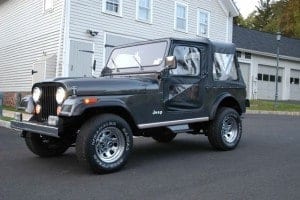 1986 was the end of the line for the venerable Jeep CJ. Its roots stretch all the way back to World War II. In 1987 it was replaced by the “YJ” Wrangler. To the casual eye, the YJ looked just like a CJ except for the square headlights. But the new Jeep had a more finished car-like interior and was lower and wider than the outgoing CJ. The Jeep makeover was an effort to fend off growing concern that the CJ was prone to dangerous rollovers. The AMC/Jeep engineers also added a more complete roll cage that added two pillars above the driver and passenger that attached to the windshield from the rear roll bar. This made it much harder (but not impossible) to lower the hinged windshield. These various upgrades did not do much to change the overall core attributes of the Jeep. However, history has not been kind to the “upgraded” YJ. The fact is that if you want a “real” Jeep you’ll want and need a CJ. As a result of time (and the propensity of owners to abuse them off road) good original CJ’s are getting harder to find. This overall trend is accelerating in the collector car market. Even vehicles that were mass-produced can and are becoming scarce. How many low-mile original CJ’s with documented histories are really left in this world? My guess is not many.

Back in 1983 my brother’s first car was a canary yellow 1979 Jeep CJ-7.  When I finally got my drivers license in 1986 (the same year as production ceased for the legendary CJ) I naturally wanted a similar cool Jeep.  Mine was a white ’86. It was a really nice Jeep and I did some minor modifications. I added a small lift and larger Goodyear Wrangler tires. It had American Racing aluminum wheels and nerf bars. I put in a removable Denon radio (anti-theft removable radios were a big deal in the 80’s) with big Bose speakers. It was a nice Jeep but there was one major flaw with my CJ. It had the anemic 2.5 liter four-cylinder engine with a four speed transmission. This engine and transmission configuration proved to be a disaster. Because the CJ is about as aerodynamic as a parachute, the feeble 2.5 liter four-cylinder struggled to get up hills or fight a mild headwind. The engine was too small and the four-speed transmission was geared incorrectly for the motor.

Back in 1986 there was a student in my high school who had a gorgeous charcoal gray CJ. It was fully optioned with the chrome package, six cylinder engine, five speed transmission, large gas tank, and a hard top. It was a super sharp Jeep and it was way nicer and better than mine. For some reason that CJ looked stunning in charcoal metallic gray with a black top. Back in 2001, a perfect 25,000 mile Texas CJ came up for sale at Collins Brothers Jeep in Wylie Texas. Collins Brothers is famous for everything related to Jeeps and is known for procuring and restoring the best CJ’s on the planet. This Jeep was identical to the gray Jeep I longed for in high school. It was in perfect original condition and had only one careful owner. It was never taken off road and the undercarriage was squeaky clean. It had no rust. I bought the Jeep in 2001 and have owned it ever since. In the summers I took it on vacations to Block Island. But around 2005 my business began to grow and then the the financial crisis hit. I ultimately became consumed with work and my car hobby moved to the back burner. In 2009 I shipped the Jeep to Florida and used it in Wellington for a few seasons. For the last five years my CJ has sat unused in the back of my garage in New York. The odometer now reads 38,000 miles.

About a year ago, I began to contemplate doing a full restoration of this low-mileage original and stock CJ-7. I spoke to Dean at Laumbach Restorations about his willingness to tackle a non-German project. This Jeep was not built in Stuttgart by fanatical Germans. Instead, it came off the line in Toledo Ohio and was crafted by unskilled and inexpensive union labor. To make matters worse, my Jeep was born during an existential crisis at Jeep’s parent company American Motors. Despite all this, Dean agreed to take on this unusual non-Mercedes project.

About two years ago I had local mechanic and Dodge Viper expert Chuck Tator do about $5,000 of mechanical work to the Jeep. He replaced the radiator and performed a lot of other maintenance that had been deferred or neglected. It now runs perfect, drives straight, and is mechanically 100%. From an aesthetic perspective, the Jeep is an excellent original survivor. The prior owner kept it pristine and the Jeep has always been garaged. It has no rust and the undercarriage is very clean overall. However, its been 32 years since it left the factory in Ohio. The factory clear coat is shot. The soft top has a patina. It simply needs a refresh and some Dean Laumbach TLC.

Last week I shipped the CJ down to Dean. He immediately got to work and as usual put 110% into the project. The more we got into the project the more possibility we saw. Dean recommended that we totally strip the CJ and do a full repaint and perform a proper factory correct restoration.

I have all the documentation on this vehicle, including the original window sticker. I have the prior owner registration documents and all the books and records. The Jeep has never been wrecked or painted and has been kept 100% factory stock. Today there are not many late series CJ-7’s that are truly factory correct and original. Jeep CJ’s, YJ’s and modern day Wrangler’s lend themselves very well to heavy modifications. Indeed, Jeeps are generally one of the most heavily modified models of any car on the market. Kids and adults alike just can’t help but add suspension modifications, sound systems, chrome packages, fender flares, and extra lights. In contrast, my CJ has always been a factory correct and original survivor.  To me its worth preserving this Jeep properly because in ten or twenty years there will be very few out there. I have a deep emotional attachment to my CJ and I feel passionate about keeping vehicles factory correct. Dean’s plan for a full no-nonsense restoration resonated well with me. “Project CJ” has commenced!

The Jeep is currently at Lee’s Garage getting painted. Lee’s is a high-end body shop that is a certified Mercedes-Benz body repair facility. They predominately work on German cars, however, the owner likes Jeeps and has agreed to take on “Project CJ.”  The Jeep will get a superior paint job at Lee’s. The quality of the paintwork will be a far cry from the original factory paint it received in 1984.

I hope to have this project wrapped up by July so we can enjoy the Jeep this summer.

Here are photos of the Jeep in the process of being prepared for paint: 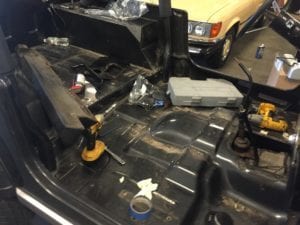 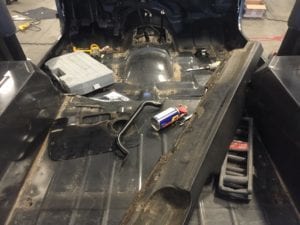 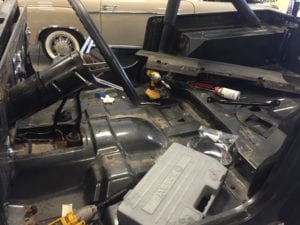 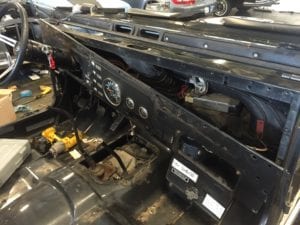 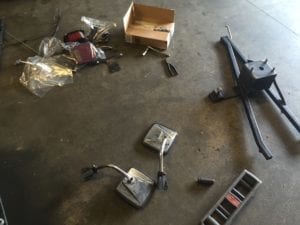 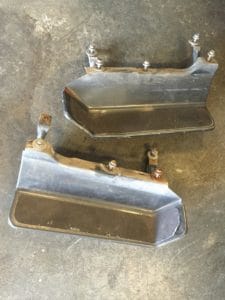 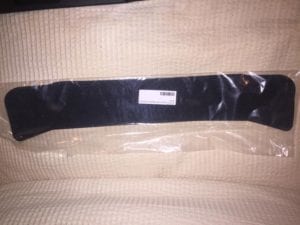 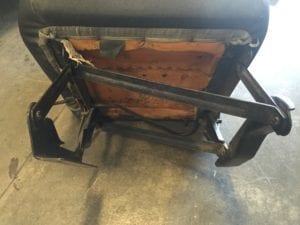 Dean is going to bead blast and repaint the seat rails. 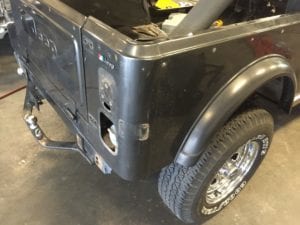 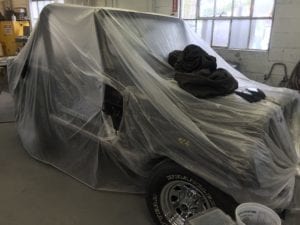 CJ getting prepared for new paint 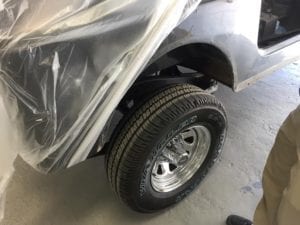 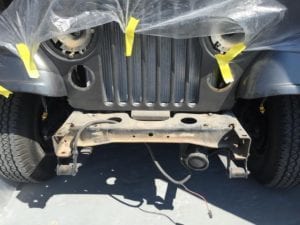 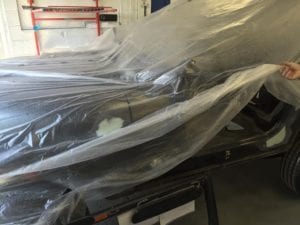 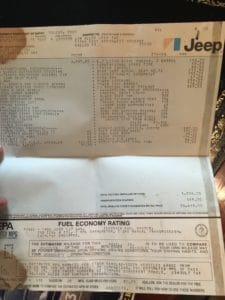 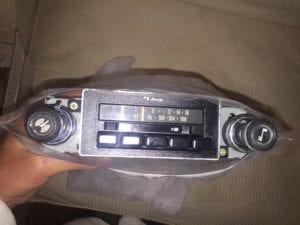 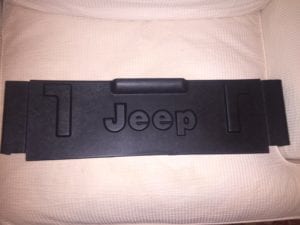 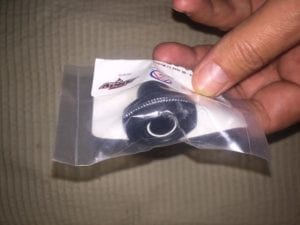 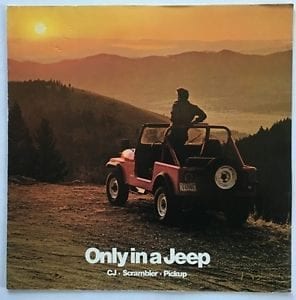 Philip Richter is President and co-founder of New-York-City-based Hollow Brook Wealth Management, LLC. The Turtle Garage Blog, he says, is dedicated to his "love of excessive personal transportation."
View all posts by Philip Richter →
Cadillac of Dreams
Behind the Wheel with Gotham Dream Cars