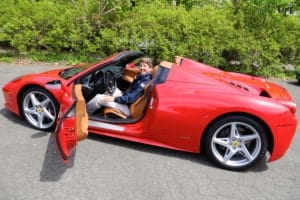 The Ferrari 458 Spyder: If you have the means I highly recommend picking one up!

On Tuesday I spent the better part of the day test driving six exotic dream cars. I was invited by my business partner’s friend Eric Kahn of Bryan Cave LLP. Scheduled on my office calendar as a “business networking opportunity,” this was the boondoggle of a lifetime! I was instructed to report to Gotham Dream Cars in Englewood Cliffs at 8am.  The best part of the day? Having time behind the wheel of six overpowered exotic cars and meeting an awesome group of like-minded enthusiasts (all with their own diverse set of interesting business experience and connections). It was a boondolggle for sure, but it was also a great opportunity to meet an outstanding group of people whom I look forward to seeing again. My day with Gotham Dream Cars further proved the “Turtle Theory of Motoring Relativity.”  The theory asserts that the greatest aspect of the car and motorcycle hobby is meeting like-minded enthusiasts who are also interesting people in their own right.

The Route: The pre-planned route took us north up the Garden State Parkway to Bear Mountain. Once we exited the Garden State Parkway the backroads became a paradise of intermittant switchbacks and lively twists and turns. We took a group photo at the top of Bear Mountain and then headed back to Englewood Cliffs. It was a perfect loop for putting these exotic cars through their paces. Every forty minutes or so we switched cars. This enabled us all to got a nice amount of time behind the wheel of each vehicle.

Here is the Turtle Garage quick take on all the cars: 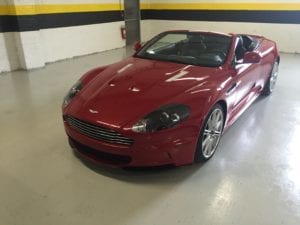 Aston Martin DBS: This 510 horsepower Brit sounds and looks great, but that is about where it all ends. Everything the motoring press has written about Aston Martin’s ergonomics and interior controls proved true in my driving experience. The dashboard and HVAC/radio controls are, to put it mildly, terrible. The poor design negatively impacts the overall driving experience. Don’t bother trying to adjust anything in this car while it’s in motion. With the top down in sunlight all of the LCD displays are unreadable. Simply changing the radio station was an ordeal. The quality and feel of the buttons and switches is something you might expect in a Russian Lada. The engine is full of power and the transmission was ok, but I would not buy this car. Given the above, I can’t imagine the electrical problems or the bills once it’s out of warranty. 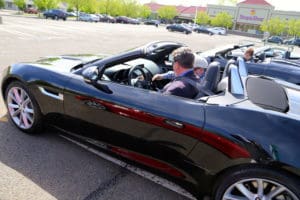 Jaguar F Type: With 380 horsepower, the Jag had the least amount of power of the group. This is an all-new car and overall it was ok. I described it to the group as being “an unoffensive car but not a lot of fun either.” The F Type is powerful, taught, and tight as a Jaguar should be. The Jag does everything fairly well and its a competent car, but its no superstar. One of the things about this car I found shocking: The sound the door makes when you close it resembles a 1974 Ford Pinto. Upon closure the glass rattles and the door emits a “tink-dink” noise. Its the sound you expect from a kitten not a Jaguar. The door experience its the first thing you notice when you step into the cockpit. You never get a second chance for a first impression and this set a negative and underwhelming tone to my overall experience. 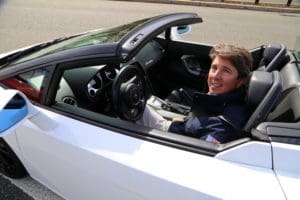 Lamborghini LP 550: This Lambo was fitted with the single most uncomfortable car seats I’ve ever experienced. The folding nosebleed seats in the 85th row at Lincoln Center are better and more supportive than the thrones installed in this car. Inspired by the electric chair in Texas, it would be cruel and unusual punishment to make somebody drive this car for more than one hour. The interior controls are pulled directly from an Audi A4 which should give this car an advantage over its ergonomically-challenged competition. However, the Audi MMI navigation and radio interface appears to have come from a British car as all the control buttons are way to the right of the nav screen. This makes a long reach required to adjust the radio. Overall, its very awkward and almost strenuous as you have to reach way over to get to the main input dial on the system. The 550 horsepower Lambo is powered by a similar V-10 that is installed in the Audi R-8 and the Bentley Continental GT. The motor has plenty of power and emits an awesome growl. However, after driving this car I realized that Lamborghini’s historical ties to manufacturing tractors is alive and well. My old John Deere 2155’s transmission is smoother than the clunky and awkward gearbox that is attached to the LP 550. Last but not least, the car lacks the overall fit and finish and attention to detail of its German competition. 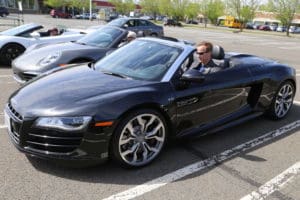 Audi R8 V-10: The 525 horsepower Audi R8 is a well mannered and refined supercar. The addition of Quattro all-wheel-drive and a more luxurious interior make it a much more grown up version of the Lamborghini 550. The folding soft top is a work of German industrial art. The R8 is powerful and very much an Audi. It’s the gentleman’s supercar of the group. 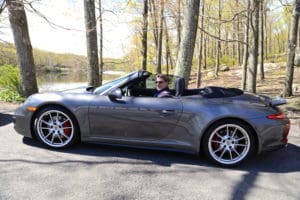 Porsche 911 Carrera 4: Despite having “only” 400 horsepower, the 911 was the winner in the “fun to drive” category. It is sophisticated, accurate, and so enjoyable that it makes you feel alive. Beautiful to look at and comfortable to sit in, the 911 makes you feel like you are physically one with it. The power is sharp and crisp and the transmission effortlessly rips through the gears. My second favorite car of the day. 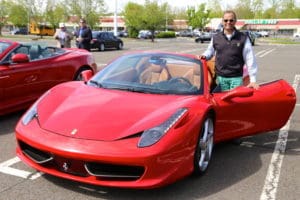 Ferrari 458 Spyder: Hands down the best car in the group by a very very wide margin. The 458 is proof that decades of racing experience have paid off. The car is just on an entirely different level than anything else we drove. Somehow I think Enzo himself would be repulsed by the amount of electronics and non-mechanical technology that is on board the 458. However, he would be stunned and awed by the transmission. The 458’s gearbox is to die for and I’ve never experienced anything like it. In manual or automatic mode, it instantly and accurately upshifts without losing any power. The car connects to your brain and is always one step ahead of it. The steering, power, and drivability of this car is remarkable. THIS IS TRULY AN AMAZING AUTOMOBILE AND LEFT AN INDELIBLE MARK ON ME.

We dropped the cars off at Gotham and headed for a fabulous group lunch. We exchanged business cards and took a poll. The Ferrari unanimously won by a landslide. The 911 was second. After that it was a toss up between the R8, Aston, and Lamborghini. The Jaguar was on nobody’s list.

The Ferrari brought to mind that wonderful quote from Ferris Bueller’s Day Off: “It is so choice. If you have the means, I highly recommend picking one up.” I’m not a Ferrari guy and never thought I’d ever want to own one. Well, Bob Dylan was right: The times they are a changin.

Thanks again to Eric for hosting all of us on the ultimate boondoggle! It was an experience we will all never forget. Besides being a bonafide networking event, it also checked one off the “bucket list.” It was a wonderful day and many new friendships were born. Several of us are already making plans to get together again. Yes, our day behind the wheel certainly qualified as a boondoggle. However, it also was a serious day of friendship building, networking, camaraderie, and fun. 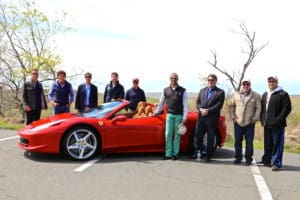 Our group at Bear Mountain

2 Responses to Behind the Wheel with Gotham Dream Cars