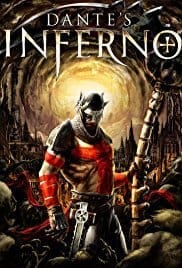 “Our own model does not incorporate a capital raise, but our lowered estimates newly show the company with less than $1 billion at the end of the third quarter, which the company has previously defined as its minimum comfort level, suggesting to us an increased—not decreased—likelihood of a capital raise,” —Ryan Brinkmann, JP Morgan analyst

With reference to Dante’s Inferno, Elon Musk commented that he is living in “production hell.” Reports are circulating that he is sleeping at the factory. Key managers have been fired in the wake of the ongoing delays of the Model 3. In the month of March, Wall Street gave Tesla stock (TSLA) a beating. As of last week, TSLA was down roughly 30% this year vs. the broader market index at about -2%. At the core of this steep drawdown is Tesla’s delay in ramping up production of the mass-market Model 3. Last quarter, management said that total Tesla deliveries reached 29,980 vehicles which breaks down as follows: 10,070 Model X SUVs, 8,180 Model 3 sedans, 11,730 Model S luxury sedans. The market had expected 38,000 vehicles to be delivered in the fourth quarter—a miss of greater than 25%. The slow ramp-up of the Model 3 is raising the specter that Tesla may need to tap the equity or debt markets to fund ongoing operations.

Last summer the company made optimistic forecasts for 2018: 500,000 cars would be produced for the year, and 20,000 Model 3’s would be manufactured per month. These lofty forecasts are now being questioned given the anemic production of 30,000 cars and roughly 8,000 Model 3 cars. In a recent statement, Tesla was targeting 2,500 Model 3’s per week by the end of the first quarter of 2018. The company looks likely to fall significantly short of that goal in the first quarter. The market is starting to lose confidence.

Tesla has put emphasis on sorting out production issues of the Model 3. These manufacturing challenges may have also negatively impacted the deliveries of the Model S and Model X (deliveries of these existing models declined by 23 percent quarter over quarter). The company indicated these delivery issues are linked to a shortage of batteries from their new production facility in Utah. Given the recent volatility of the stock, the market appears to be questioning if the numbers might be signaling investors that the appeal of Tesla could be fading.

Tesla’s current troubles go beyond the Model 3 production snafus. A Tesla Model X was recently involved in a fatal accident. A high-profile NTSB investigation found that the car in question was on autopilot. Further analysis indicated that the driver’s hands were not on the steering wheel when the car hit a concrete divider. Finally, CEO Elon Musk has often made comments of how important the China market is for Tesla’s growth. Recently, Musk Tweeted, “I am against import duties in general, but the current rules make things very difficult. It’s like competing in an Olympic race wearing lead shoes.” Musk’s stance is relevant to Tesla’s long-term sales plans because it raises the question about his support of Trump’s new proposed tariffs. Musk’s open support for penalizing China this could ultimately impact Tesla’s sales in the PRC.

Tesla is also suffering from the increased debt load of its acquisition of SolarCity in which the company paid $2B and assumed $2.9B of debt. The two combined entities now have roughly $10B of debt. A meaningful portion of SolarCity’s debt is coming due soon and its impacting the credit worthiness of Tesla. The timing could not be worse—Moody’s just lowered Tesla’s debt rating to B3 which increases their borrowing costs. Disgruntled shareholders who did not vote for the SolarCity/Tesla merger just received the green light from a Delaware court to sue under the grounds of conflict of interest (Musk’s relatives run SolarCity and he is deeply involved).

The next eighteen months will tell us much about the future of Tesla. Production problems must be addressed and resolved. The company needs to somehow lower its cash burn rate of $6500 a minute while continuing to develop new products. Right now, (even after the 30% correction in the stock in March and early April), Tesla is still worth more than Ford. In 2017, Ford sold almost 250,000 vehicles per month in the U.S while Tesla only delivered 100,000 cars in total in all of 2017. Despite the lack of profitability and low production numbers, Wall Street values Tesla at $46 billion.

Only time will tell….

Here is a recent chart of the stock: 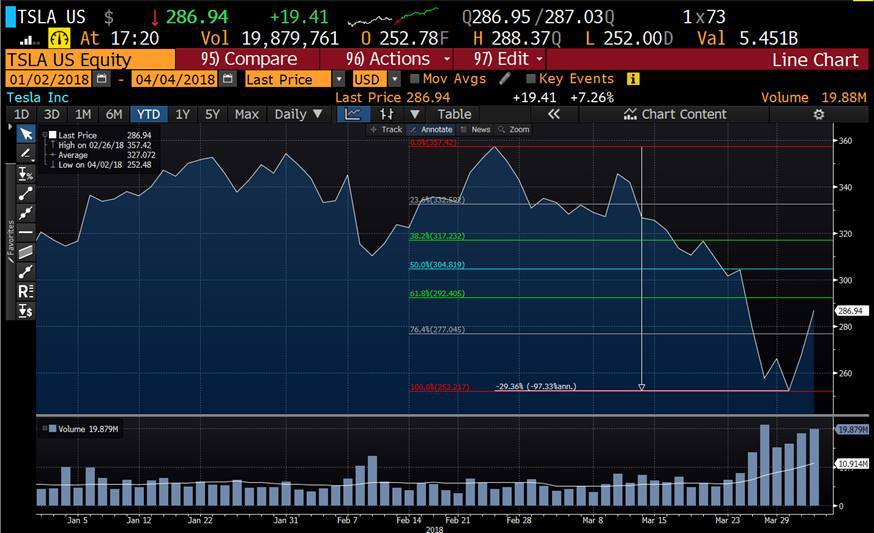 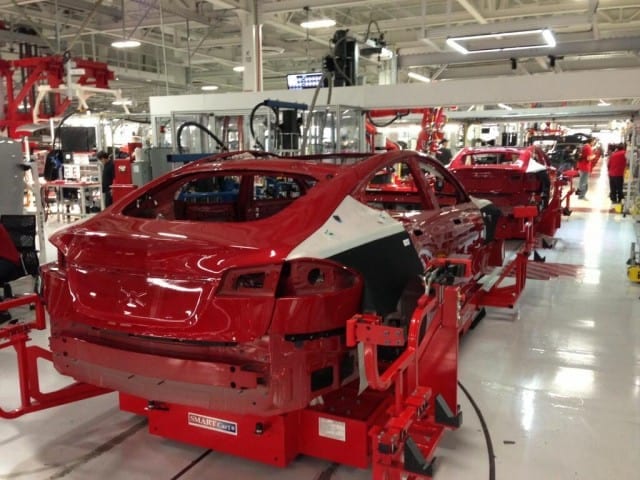 Philip Richter is President and co-founder of New-York-City-based Hollow Brook Wealth Management, LLC. The Turtle Garage Blog, he says, is dedicated to his "love of excessive personal transportation."
View all posts by Philip Richter →
The Extraordinary Dallara Stradale: A Race Car for the Road
Barrett-Jackson Palm Beach: Demographics are Impacting the Collector Car Hobby

4 Responses to Production Hell: Is Tesla Entering the Breakdown Lane?