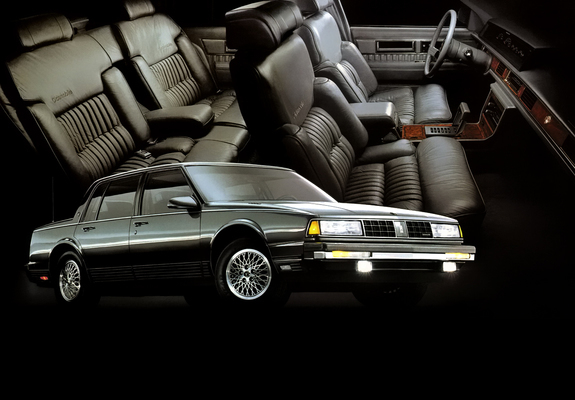 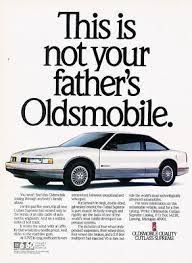 Today my father, Max, would have been 88 years old. Max loved Oldsmobiles. I never really thought about this fact until I was on Block Island last week and happened to see three Oldsmobiles thriving in captivity. These three cars, a late model Eighty-Eight, a first-generation Bravada SUV, and an Alero were either parked in town or wandering slowly down Corn Neck Road. When was the last time you saw an Oldsmobile driving on a public road or parked on the street? The brand has been defunct since 2004. The sight of these automotive archaeological artifacts jarred my memory and got me thinking about the Oldsmobiles that my father owned. It also spurred me to do some research on this now forgotten but once iconic and storied brand. We all think about Tesla as an innovative automobile company today, but it turns out, Oldsmobile was an equally (if not more) innovative manufacturer back in its heyday. Over 35 million Oldsmobiles were sold between 1897 and 2004.

Through the 1980s and into the 1990s, Max always drove Oldsmobiles. In 1988, the marketing geniuses at GM came up with a campaign to rejuvenate Oldsmobile’s fading brand. They chose, “This is not your father’s Oldsmobile.” I remember being 18 years old, driving dad’s car and telling my friends, “this is my father’s Oldsmobile.”

Then came the 1987 Touring Sedan. This car was built atop the same sub-par C-Body platform as the 1985 Ninety-Eight but appeared to have had a major intervention and makeover by the Germans. It had stiff suspension (called FE3), firm seats with bolsters, real wood trim, lots of gauges, and a center-shifter with a console. It was indeed a great car. Well made, it drove tight like a BMW of that era. Oldsmobile subcontracted part of the production of this car to Michigan-based coach builder ASC. The Touring Sedan was not a cheap car back in 1987 with a list price that came in at about $52,000 in today’s dollars. A pedestrian run-of-the-mill Ninety-Eight was priced at 30% less than a Touring Sedan. Max opted for another Touring Sedan in 1989. It was virtually the same car as the 1987, but with some marginal improvements and aesthetic changes.

Then, in 1995, the Aurora arrived. This all-new model was a daring “love it or hate it” design conceived of by GM’s talented designer Maurice “Bud” Chandler. In hindsight, the Aurora was Oldsmobile’s final shot at squarely targeting European imports. The nimble Aurora drove tight and was similar to the Touring Sedan but much more modern. Under the hood it had a version of Cadillac’s smooth, reliable, and powerful Northstar V8. Despite being a capable car that was well made, the Aurora never won over the hearts of fleeing Oldsmobile buyers. Max’s last three Oldsmobiles were almost competitive with their foreign competition. But these cars were on the highest end of the Oldsmobile lineup—the average Oldsmobile customer driving a much cheaper Cutlass was not sharing the same driving experience as Max.

The Aurora was a really good car, but it was too little too late. Oldsmobile sales were strong until the mid-1980s (1985 was an all-time record year of sales for Oldsmobile—they reached 1,066,122 units). But in the late 1980’s, European brands turned up the heat and the Japanese entered the luxury auto segment. Oldsmobile sales ultimately declined during the 1990s. What went wrong? The Oldsmobile Diesel may have been the first nail in the coffin, followed by their ill-fated “This is not your father’s Oldsmobile” advertising campaign. In the auto industry, it’s hard to recover from missteps when the competition is escalating. Low-quality cars with indistinguishable designs from other GM brands contributed to Oldsmobile becoming an irrelevant brand. However, this sad state of affairs was not always the case. Back in the early age of the automobile and well into the 1960s, Oldsmobile was a very innovative brand that led the industry with many firsts.

Ransom E. Olds founded the Olds Motor Works in 1897. The company’s first production car was the $650 Curved Dash. Olds left the company in 1904 after a falling out with the largest shareholder’s son. The Olds Motor Works was bought by GM in 1908 and renamed Oldsmobile. Ransom Olds also started REO Motor Car Company (the manufacturer of the fabled REO Speed Wagon) and successfully dabbled in real estate and other businesses. Notably, Ransom Olds was the first person in the automobile industry to use a stationary assembly line—although Henry Ford is widely credited with the first moving assembly line.

Under GM, Oldsmobile became an industry leader in technology and innovation. Long before electric drive and overnight software updates, there was Oldsmobile. During the 107 years of Oldsmobile’s existence, the brand was responsible for many new technologies and industry firsts. Oldsmobile’s biggest innovations include fully automatic transmissions, overhead valve motors, turbocharging, front-wheel-drive, airbags, and satellite navigation. The following timeline is a list of Oldsmobile’s major industry accomplishments:

The next time you see an Oldsmobile going down the road you might look at it little differently now—even though the chances of seeing one on the road are slim—and getting slimmer every day. The next time you are listening to 80s satellite radio, and an REO Speedwagon hit song like Take It On the Run, Keep on Loving You, or Can’t Fight This Feeling envelop your ears; you will know where that band got its odd name. 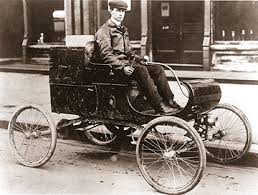 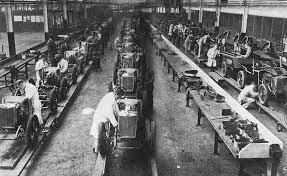 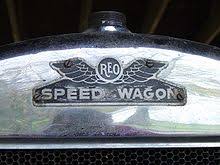 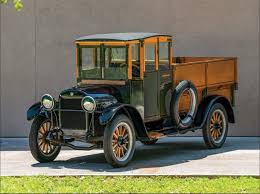 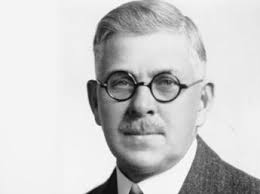 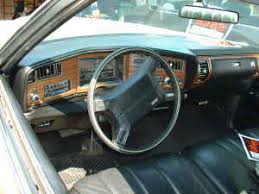 1974 GM car with an optional airbag 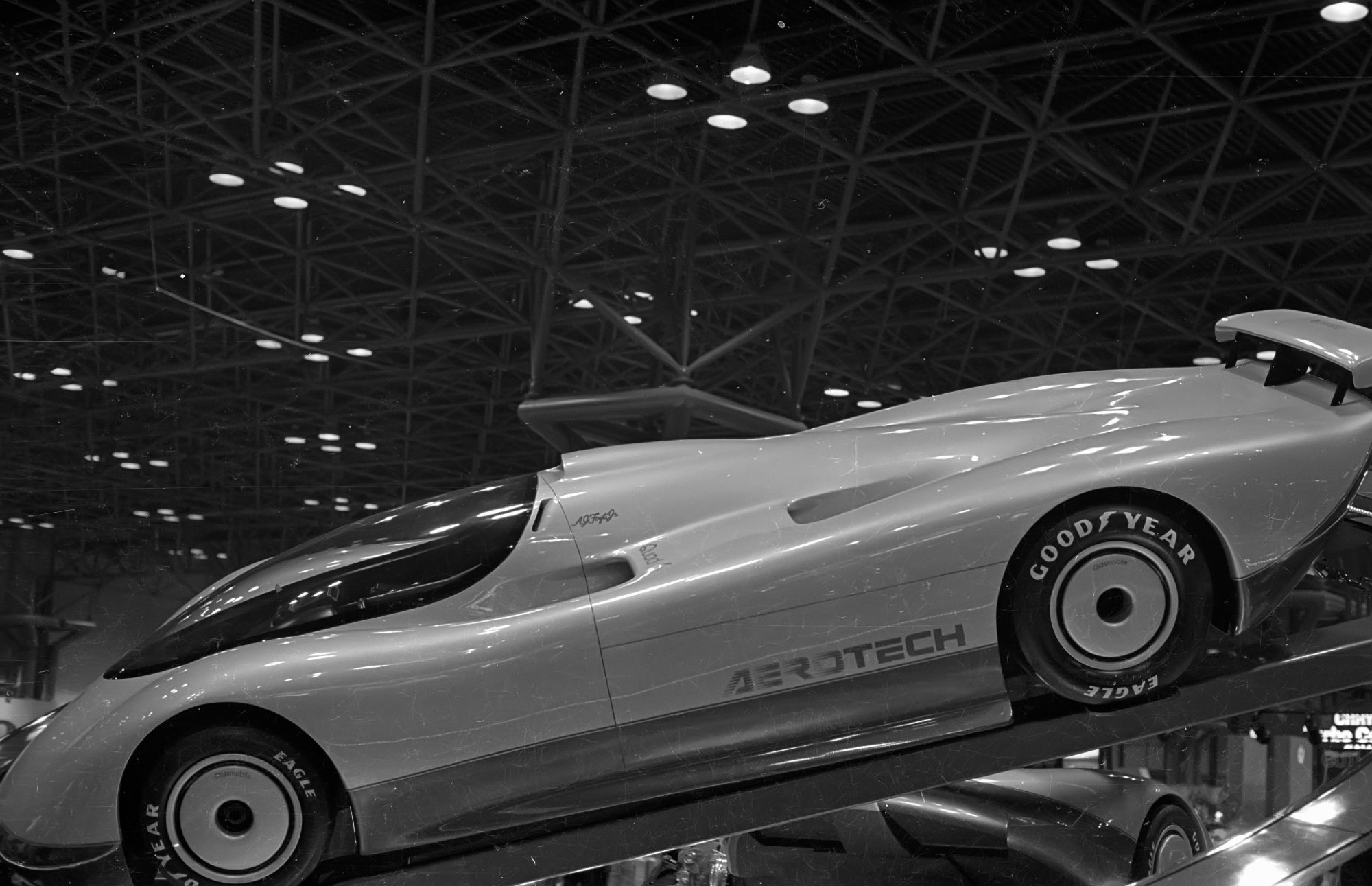 The 1988 Oldsmobile Aerotech with a Quad 4 engine. I saw this car at the 1988 New York Auto Show and took this photograph 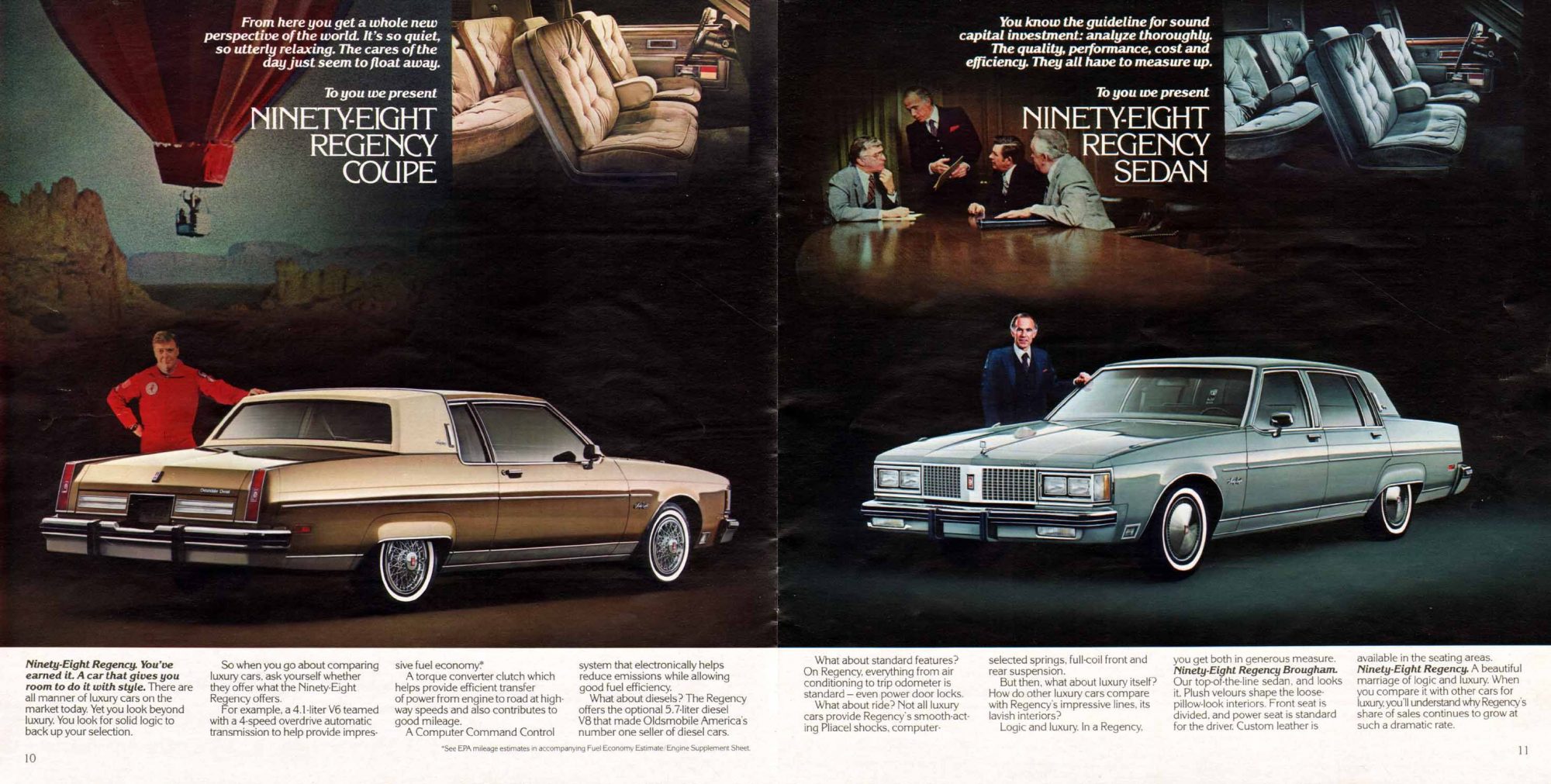 The 1983 Ninety-Eight—both coupe and sedan were available 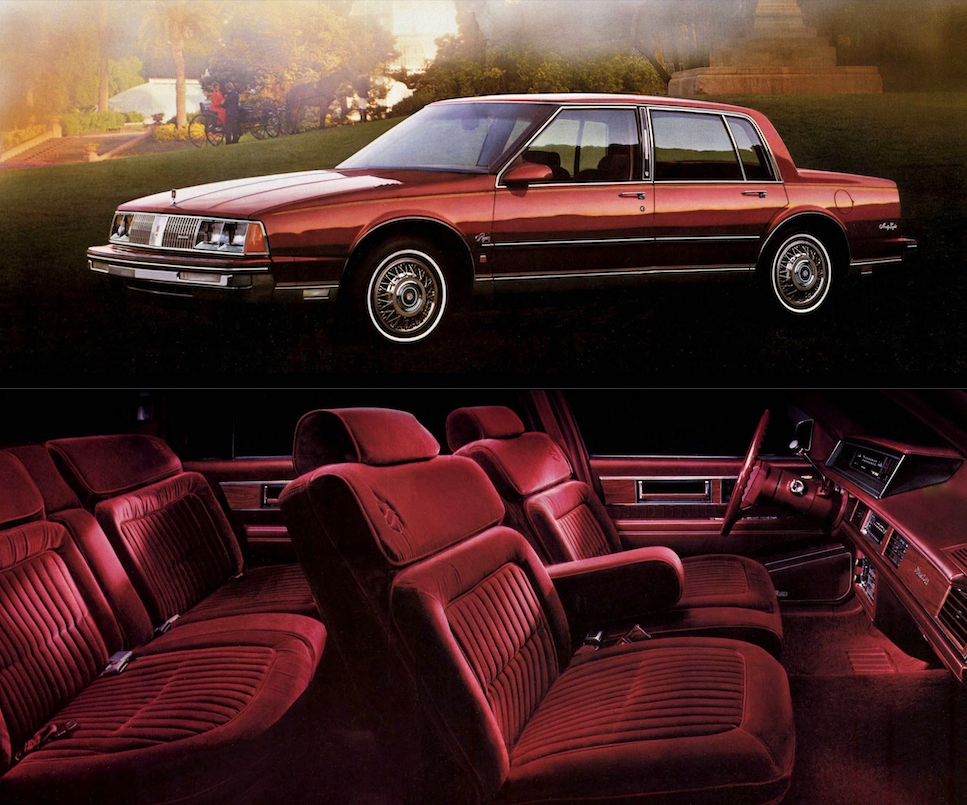 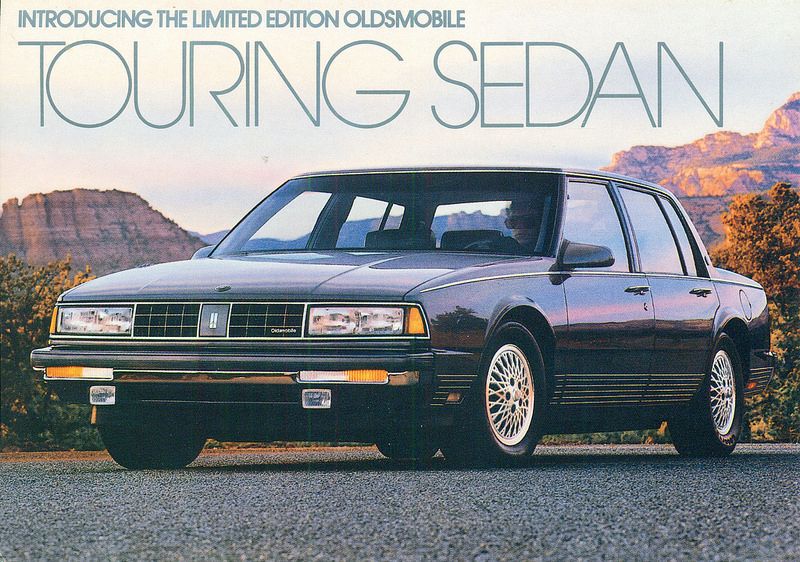 The 1989 Touring Sedan had subtle updates, including new rims and an onboard computer 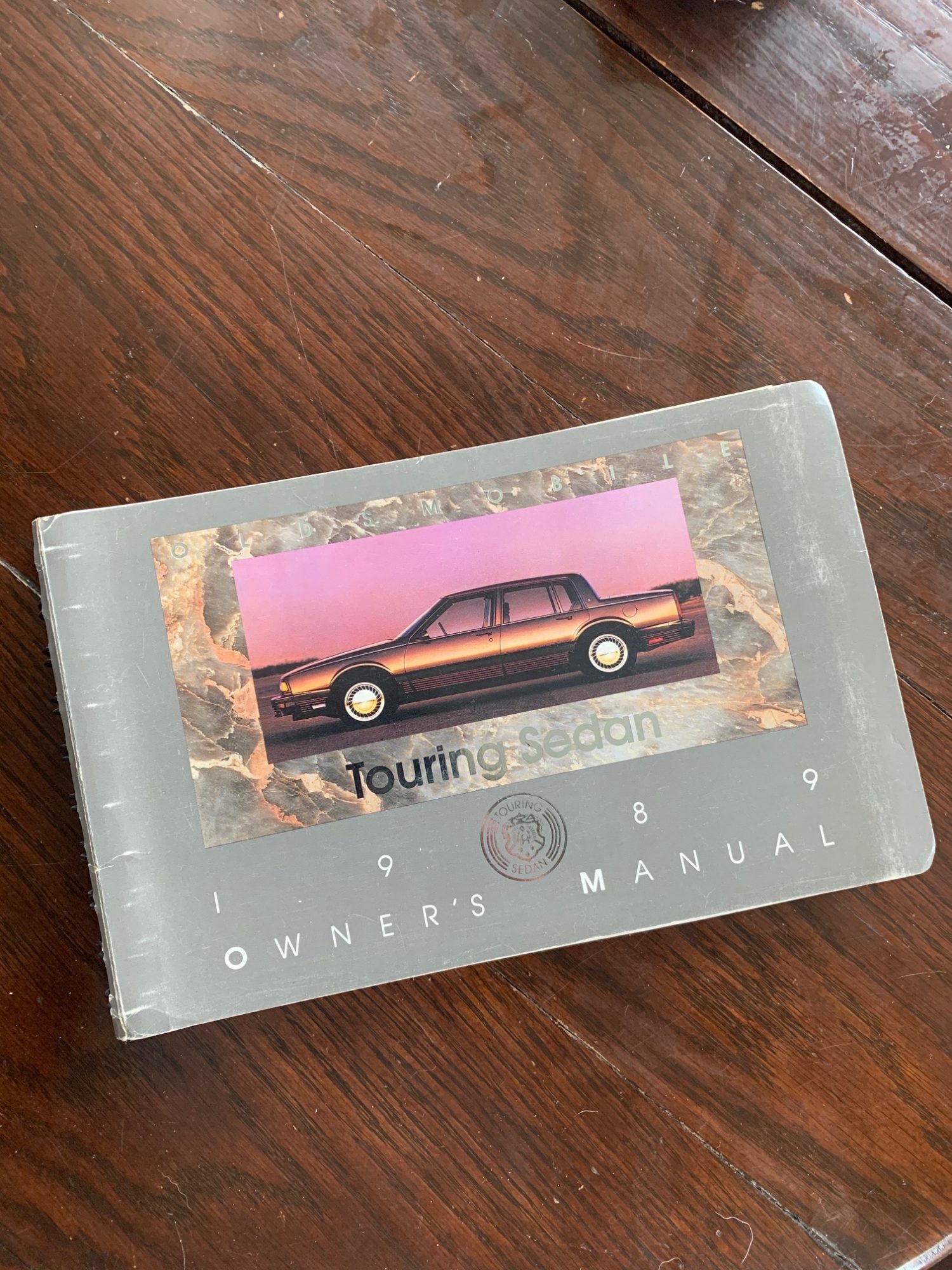 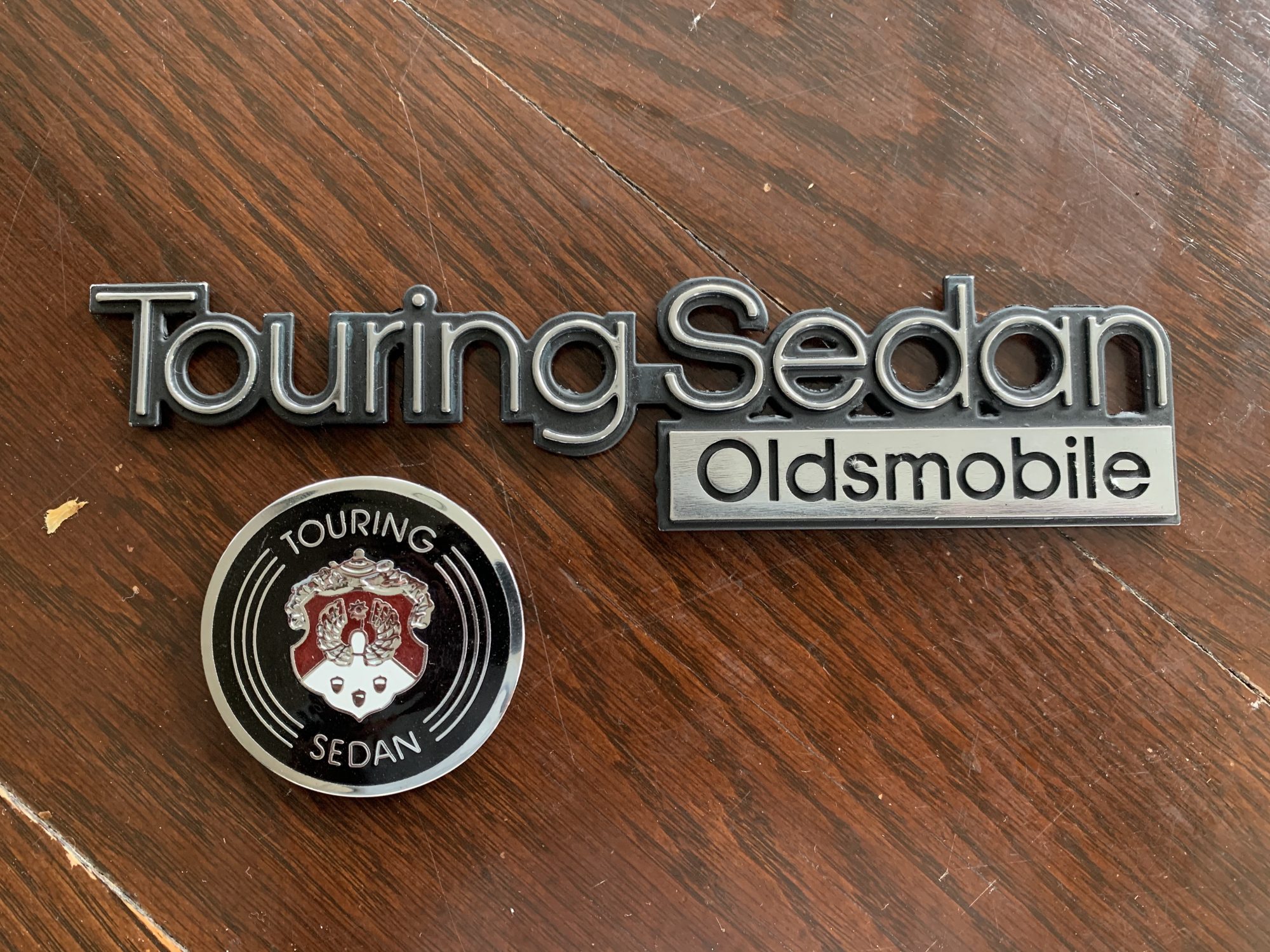 The badges off the 1987 Touring Sedan 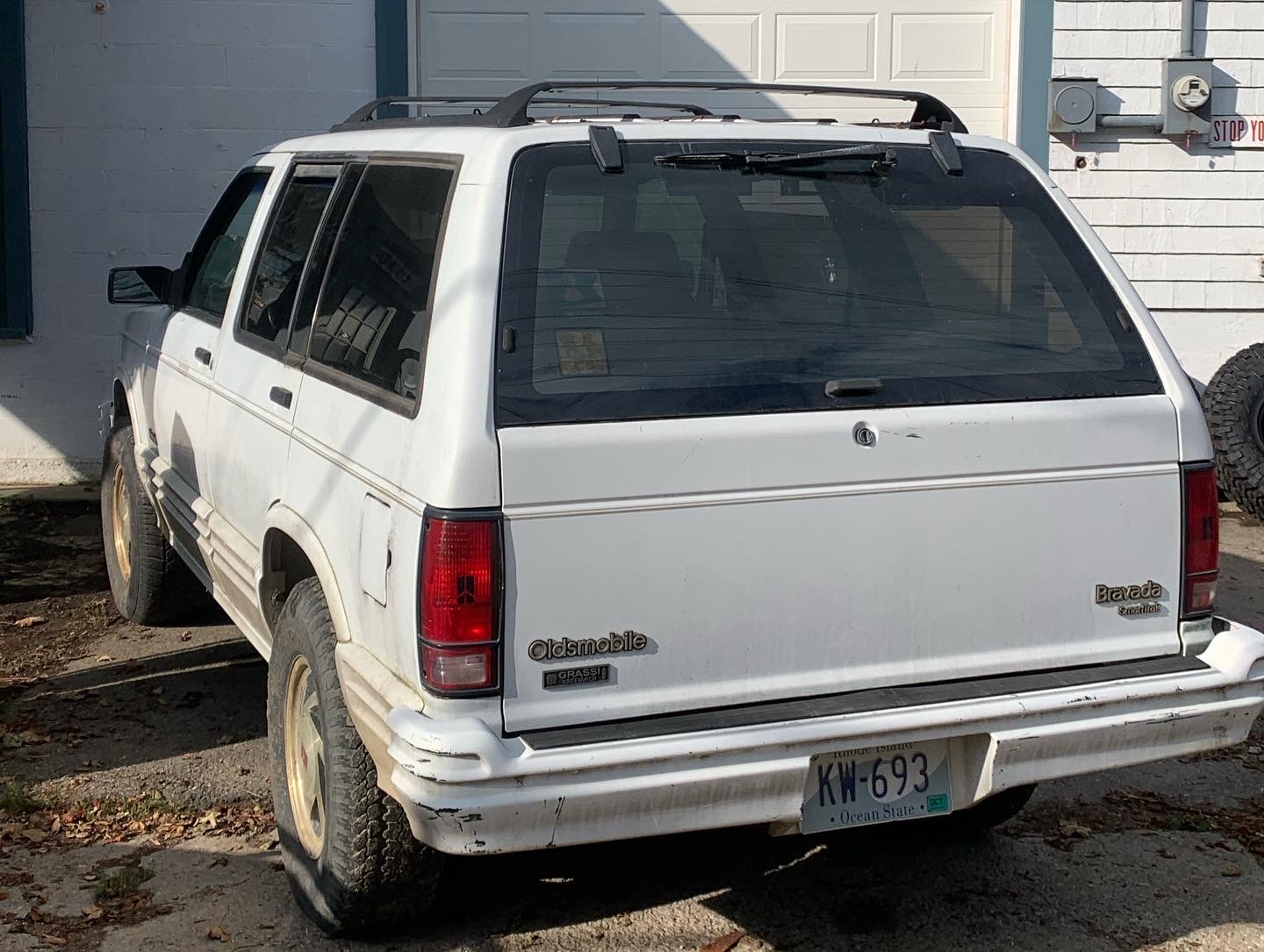 The Oldsmobile Bravada spotted on Block Island (Note this car was sold new at Grassi Oldsmobile in Greenwich CT, you can see the dealer tag below the Oldsmobile badging) 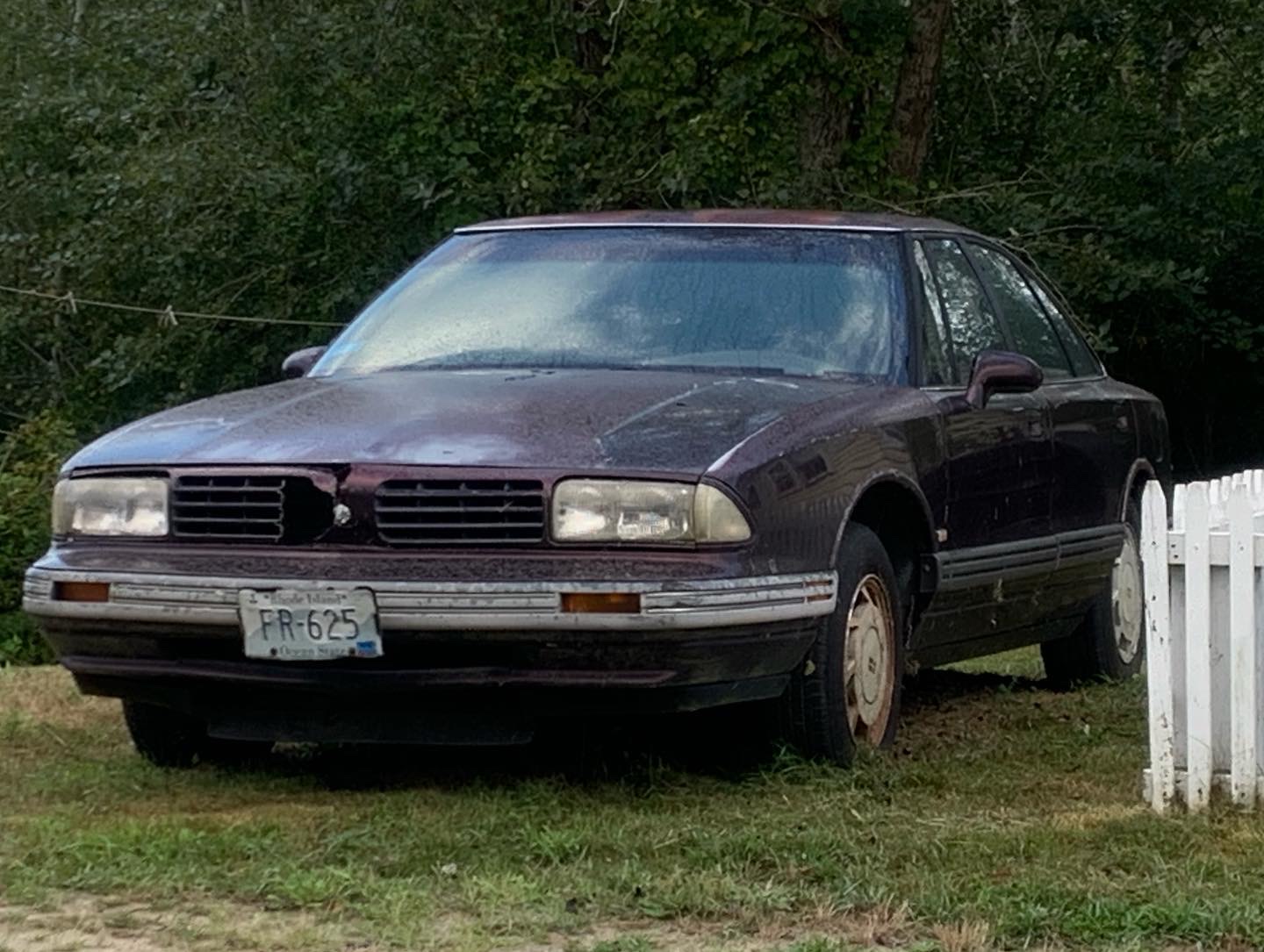 This is the final iteration of the Oldsmobile Eighty Eight, spotted on Block Island and in need of a paint job 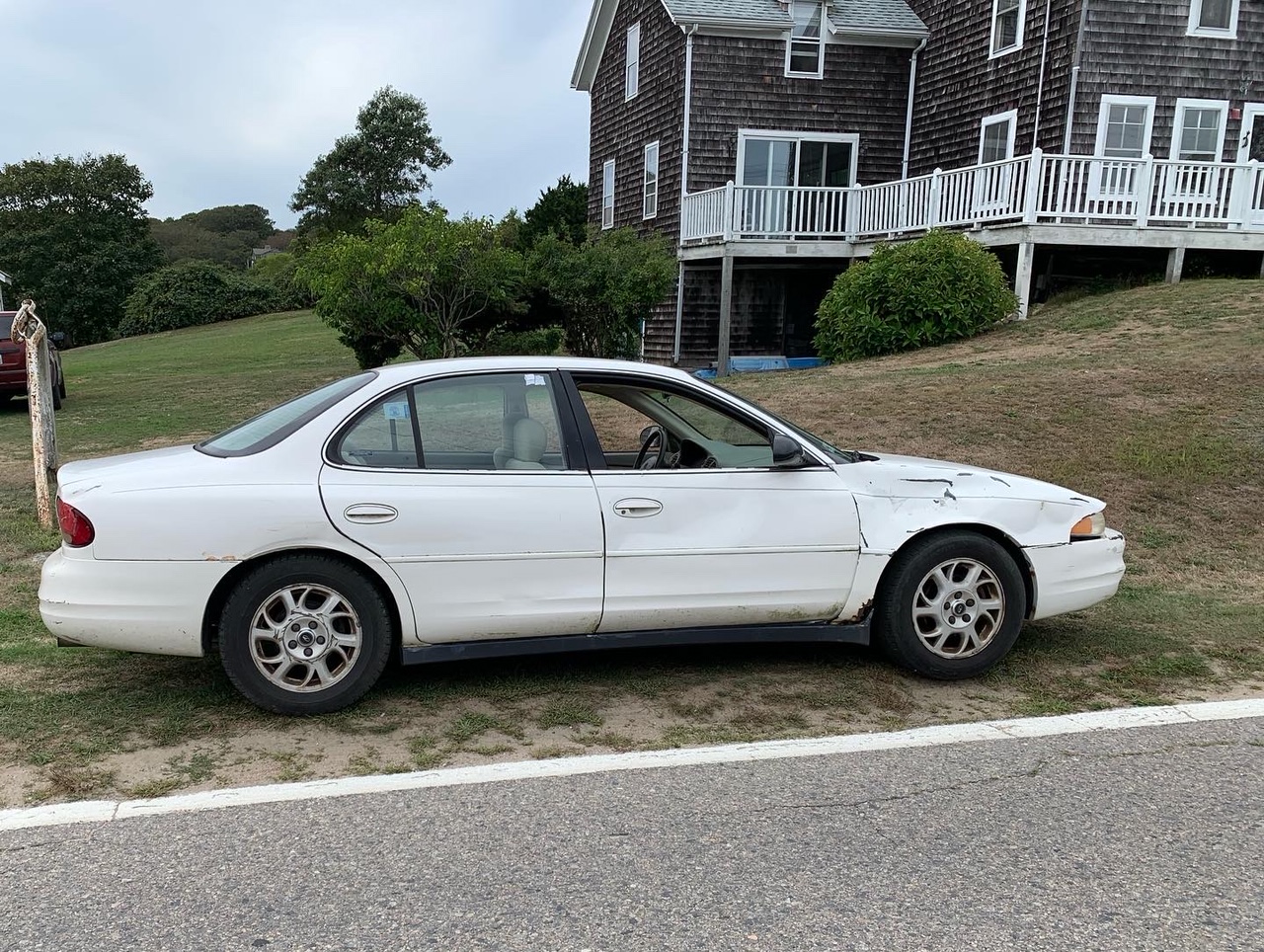 This dented up Oldsmobile is still running around Block Island 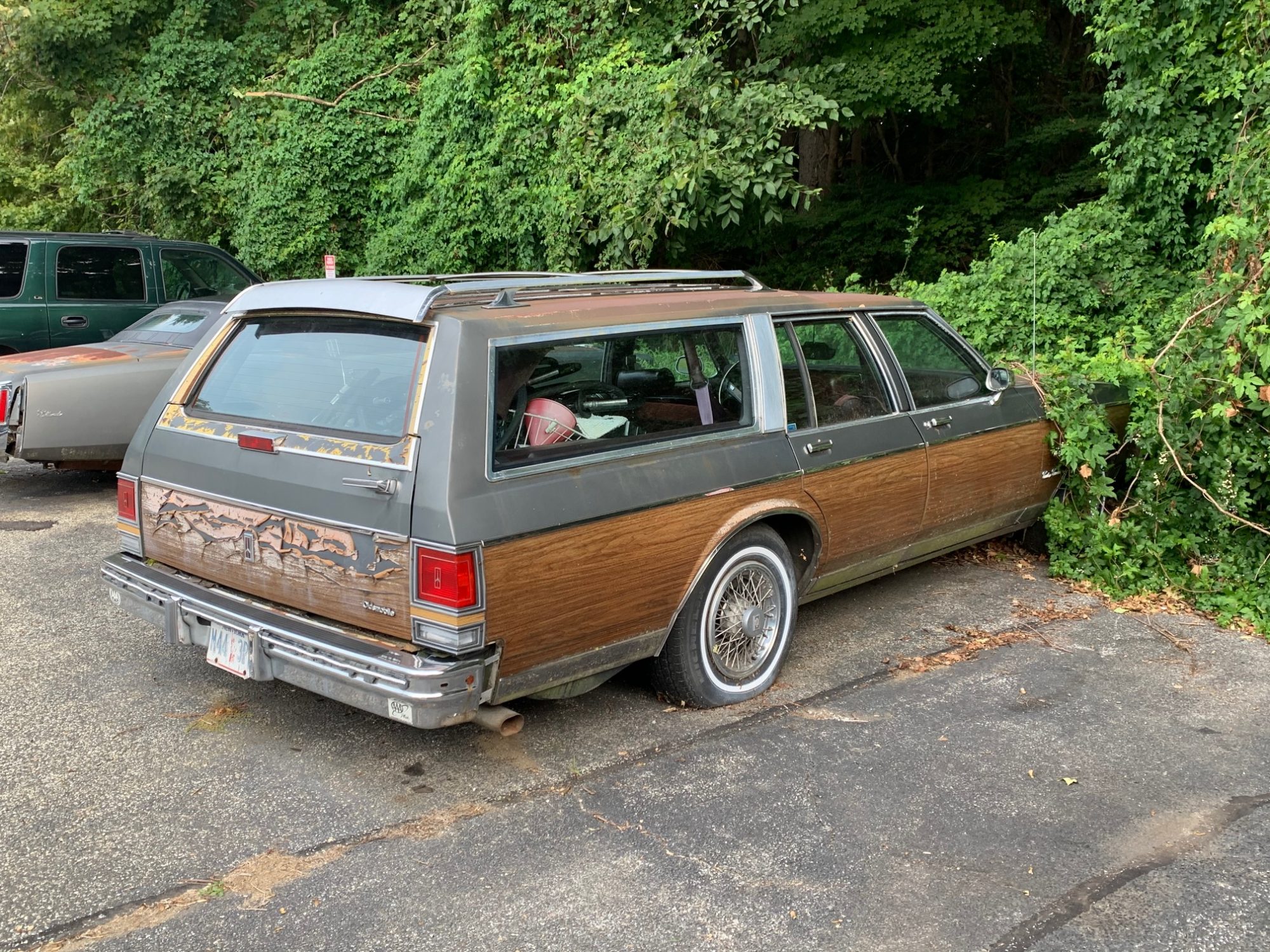 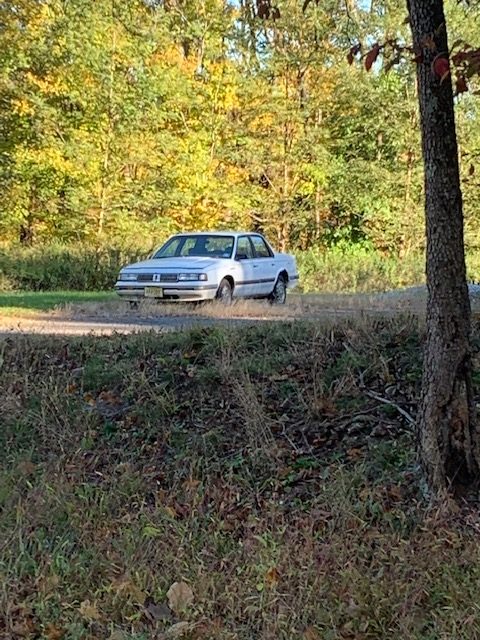 Philip Richter is President and co-founder of New-York-City-based Hollow Brook Wealth Management, LLC. The Turtle Garage Blog, he says, is dedicated to his "love of excessive personal transportation."
View all posts by Philip Richter →
California Dreamin’
State of the Market: Safe, Steady, or Slipping?

10 Responses to My Father’s Oldsmobiles