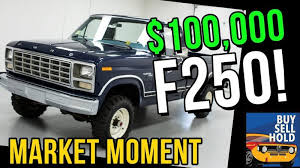 The great thing about the collector vehicle market is that there is never a dull moment. It is ever changing and evolving. The recent truck mania is no exception. It all started in about 2016 when early Ford Broncos started selling at ludicrous valuations. Today we are regularly seeing truck auctions defying gravity. Nowadays, it will take two or more Bitcoins to buy a delivery-mile 1980 Ford pick up or a new 1975 Chevy C/K series Blazer.

The current truck market is bifurcated. There are “new only once” pick ups regularly hitting the market and often selling for six figures. Where these trucks have been over the last 40 years nobody knows—but digital auctions are bringing them out of the woodwork. Examples of such outcomes include a virtually new 1980 Ford F250 4×4 that sold for almost $100,000 on Bring a Trailer. There have been others as well, including a 57-mile 1975 Chevrolet Blazer that made $112,000. But there are also trucks with miles, rust, modifications, and patina that are gaining momentum in the market.  What is behind this unfolding trend? Demographics and nostalgia are an easy and obviously answer. Sure, factors like age, income, and fond memories play a role—but that only explains a small part of the equation. Trucks are fun, useful and practical. Both delivery mile “in the wrapper” trucks as well as imperfect used trucks are squarely trending north. Driving a pick up evokes a practical image—they make a very different statement than a 1984 Porsche 944 or a MG. There is a fun factor that trucks give you that you can’t get with an entry level sports car.

In general, trucks have a much cheaper entry price than ordinary collector cars. Knock off parts are available everywhere—and they are cheap. While many will swoon over a 58-mile 1975 K5 Blazer, an equal amount of people will probably also appreciate a 1978 Jeep J10 Honcho with some patina! Trucks also have an advantage because there is a huge menu of options out there. You can buy an early pick up from the late 1940s or early 1950s. You can get into a Dodge Power Wagon. International made some interesting oddball trucks and as late as the early 1980s they were still building the venerable Scout. Japanese trucks like the early 4Runner and Nissan Hardbody are also cool. Even the Golf-based VW pick up is something that you won’t ever see in your local grocery parking lot.

In the following video, we talk about the recent astounding outcome of a Ford F250 on Bring a Trailer. Watch as we discuss with fellow SCM experts this outstanding auction result: