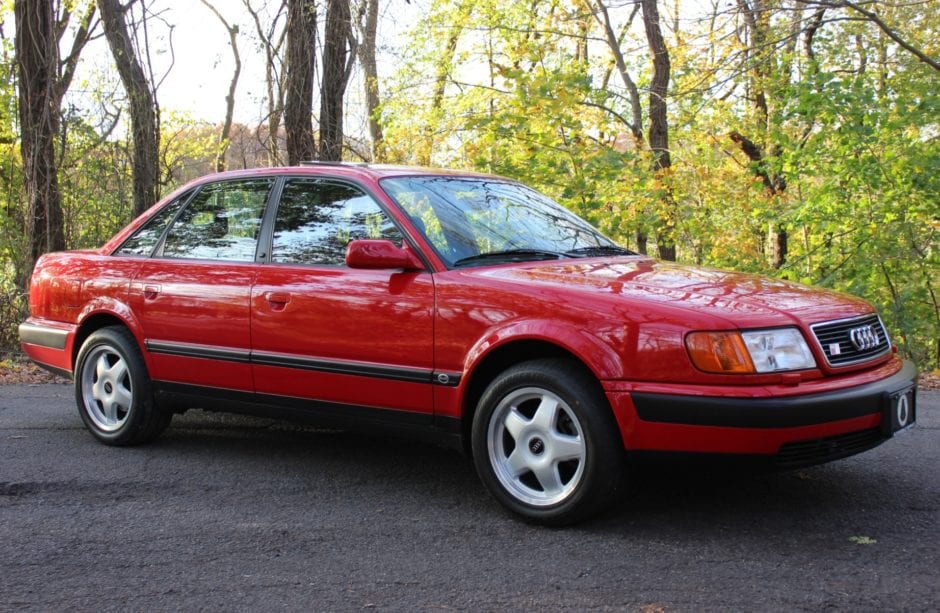 By Philip Richter on December 9, 2018 in Auction Spotlight

This 1993 Audi S4 is finished in red over black leather and shows just 11,805 miles. Few car enthusiasts know how special and rare this Audi S4 is—The model is not a S4 as we think of today as being a high-performance A4. Back in 1993, Audi had a confusing naming convention for its models. During this era, Audi had the 90 series, the 100 series, and the V8. The 100 series was ultimately re-badged as the A6 in 1995.  The original 100 was a very handsome design. The S version had flared fenders, a big turbocharged 5-cylinder engine, and super supportive seats. I recall my friend had one and it sported heated rear seats and carbon fiber door inlays—perhaps a first for any German sports sedan.

The high performance edition of the Audi 100 cars were later re-badged the S6 but only for a few short years. The S4 was only imported to the United States in 1993 and 1994, and it had a staggering price tag—thus there were not many takers. This particular car had a documented ownership chain and was sold new at Stoddard Imports outside Cleveland Ohio—a well known early Porsche and Audi dealer that is respected by many car enthusiasts.

The BAT listing provided several close up photos of the undercarriage which further corroborates its Ohio history. Quite a lot of surface rust can be seen in the pictures, however, the original mileage appears correct, and the carfax is clean. The overall body looks good and rust free. This is a very rare car and a fantastic machine to drive. Had I seen this car on BAT I might have bid myself! At $33,000 it is pretty fully priced, however, it is rare and one of the least known of Audi’s greatest cars. It also has incredibly low mileage. I think this car was well bought and with a thorough detailing and undercarriage cleaning by Dean Laumbach, it might really come back to life as an investment grade example. Well bought.

Philip Richter is President and co-founder of New-York-City-based Hollow Brook Wealth Management, LLC. The Turtle Garage Blog, he says, is dedicated to his "love of excessive personal transportation."
View all posts by Philip Richter →
Join Us For The 2019 Turtle Invitational!
BMW 850 CSi: A Legitimate Modern Classic