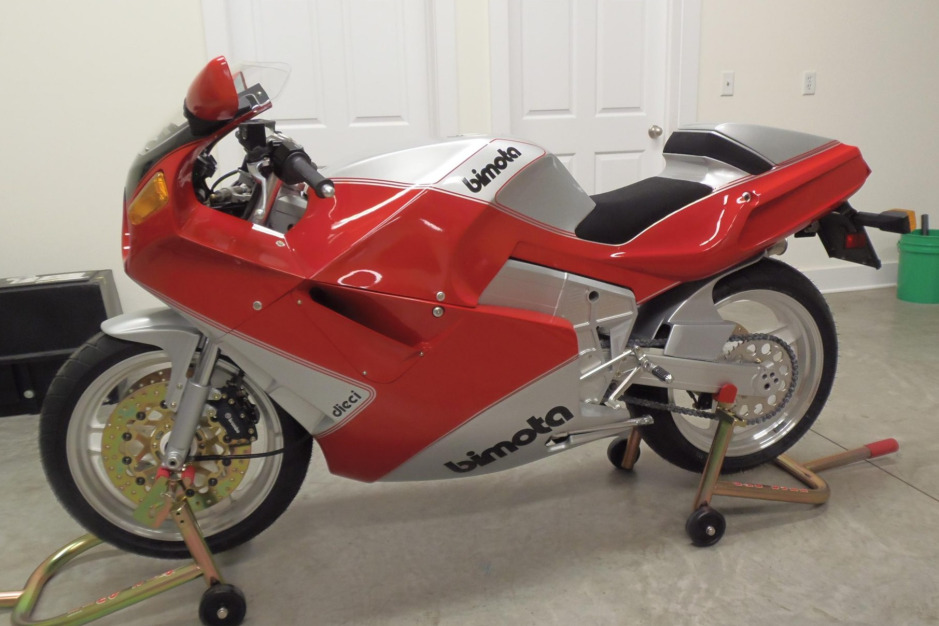 By Philip Richter on March 30, 2021 in Auction Spotlight

Bimota was once an obscure Italian brand but it has recently moved into the lexicon of collectors. According to Wikipedia, Bimota is a small Italian manufacturer of custom and production motorcycles. It was founded in 1973 in Rimini, Italy by Valerio Bianchi, Giuseppe Morri, and Massimo Tamburini. The company name is a portmanteau derived from the first two letters of each of the three founders’ surnames, Bianchi Morri Tamburini. There are many historic and special Bimota models. The highly coveted Tesi 1D just sold on Bring a Trailer for almost $80,000! Here at Turtle Garage we have a Tesi 1D and a 20 mile example of our subject motorcycle, the YB10.

From Bat: This 1991 Bimota YB10 Dieci was acquired by the seller in 2010, reportedly still in its factory shipping crate following 20 years of storage at the original dealer’s warehouse, and was placed on front and rear stands without fluids in a garage in 2013. Equipment consists of a liquid-cooled 1,002cc inline-four mated to a five-speed transmission, red and silver bodywork, an aluminum frame with a double-sided swingarm, triple Brembo disc brakes, a steering damper, a Marzocchi inverted fork and rear monoshock, clip-ons and rearsets, and street equipment. This YB10 is offered with a tool kit, keys, manufacturer’s literature, and a clean Virginia title in the seller’s name.

Just over 200 YB10’s were produced. This is a good outcome for the buyer and probably represents a slow grind higher from a valuation standpoint. Moreover, the YB10 is an engineering masterpiece and a joy to look at. Given that it is a zero mile bike, its unlikely that it will see any pavement anytime soon. Very well bought!