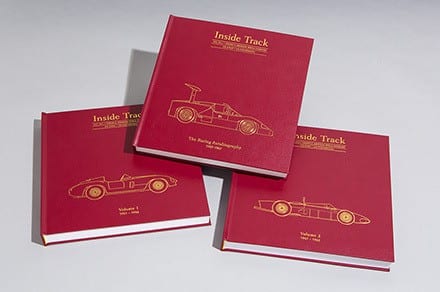 By Philip Richter on May 20, 2018 in Auto Racing, Books, History, People, Reviews

At Christmastime, my wife and I engage in a veritable “arms race” of holiday gift giving. It is not about the cost or size of the present, but rather we vie for the most personalized, creative, innovative, and thoughtful gift. Sometimes they are homemade. Sometimes they are silly. Most of the time they make us both laugh. Our gift exchange is a ridiculous oneupmanship on “out of the box” present ideas. This past Christmas Sarah dropped a 50 megaton bomb—it came in the form of an enormous multi-volume biography of the legendary race car driver Phil Hill. Score: Sarah 1, Philip 0. About a year ago I shared a website that announced the new 3-part series on Phil Hill. I did this to share my enthusiasm and educate her on this legendary race driver. Sarah is very supportive of my car passion and my love of F1 racing, and she figured (correctly) that this book was right up my alley. Several months went by and when Christmas arrived this treasure was under the tree.

Beautifully published, Inside Track is available in a variety of editions:

Sarah went deep and got me the Connoisseur’s Edition. This massive set of books comes in two giant leather and felt lined cases. The books include rare photographs taken by Phil Hill—as well as a comprehensive biography. This winter I took a long weekend and went through the large tome from cover to cover. The book is beyond extraordinary and is the perfect unique gift for the car enthusiast in your life. Never before has such a beautiful book been published—the series is a fitting tribute to America’s greatest racing legend. Inside Track can be purchased here.

Phil Hill (1927-2008) was Ferrari’s 1961 Formula 1 World Champion Driver—and the first, and to date only, American-born sportsman to win world-class motor racing’s premier road racing title. He was also three-time winner of both the Le Mans 24-Hour and the Sebring 12-Hour races, twice-winner of the Buenos Aires and Nürburgring 1000Kms classics, and twice-winner of the Formula 1 Italian Grand Prix.

A deeply thoughtful, cultured, decent man, Phil was also a fine and accomplished engineer, a highly successful car restorer, a man of taste and discrimination across a wide range of interests from classical music to British nonsense songs, and his wonderfully insightful contributions to ‘Road & Track’ magazine—carefully composed with his long-time friend and collaborator John Lamm—set him upon an entirely different plane from almost all of his one-time peers and rivals.

Phil Hill drove not only for Ferrari. He also raced at top international level in Cobra, Ford GT, Chaparral, Porsche, Cooper and Aston Martin cars amongst others. He was a global player, an internationalist who saw his first Formula 1 car at the British Goodwood race circuit as early as 1950. Looking back upon that day, this modest high-achiever recalled: “At that time, the limit of my ambition was one day to be a mechanic to a great driver …”

Twelve years later he would himself be Ferrari’s reigning Formula 1 World Champion Driver. Through all his racing up to 1962—when he saw his friend and protégé Dan Gurney win the French Grand Prix at Rouen-les-Essarts—Phil Hill used his favoured Leica cameras “… to show the folks back home” the motor racing scene he so loved in fantastic quality color.

Built around this very personal and long-private photo collection of mainly Kodachrome motor racing photography—intimate, candid, often exquisitely composed, a superb-quality colour record of a bygone age absolutely brim-full of nostalgia, personality, spectacle and drama—the Collector’s Edition and Racing Autobiography of ‘Inside Track’ were published in late 2017 to huge acclaim, a true publishing sensation, ‘setting the standard by which all future World Champion Drivers’ books will be measured’. 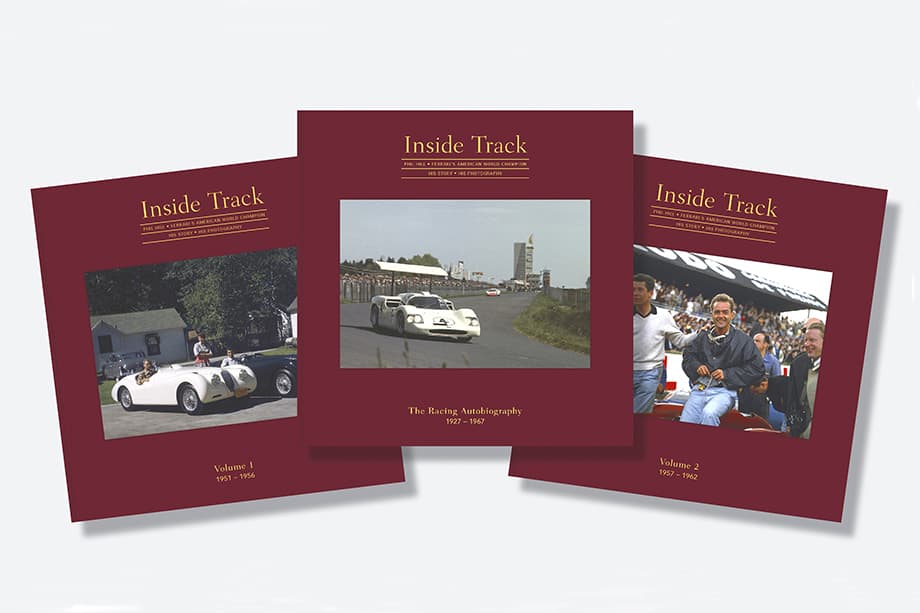 Philip Richter is President and co-founder of New-York-City-based Hollow Brook Wealth Management, LLC. The Turtle Garage Blog, he says, is dedicated to his "love of excessive personal transportation."
View all posts by Philip Richter →
Henry Ford: The People’s Tycoon
Where Does Cadillac Go From Here?