By Philip Richter on June 1, 2015 in Motorcycles 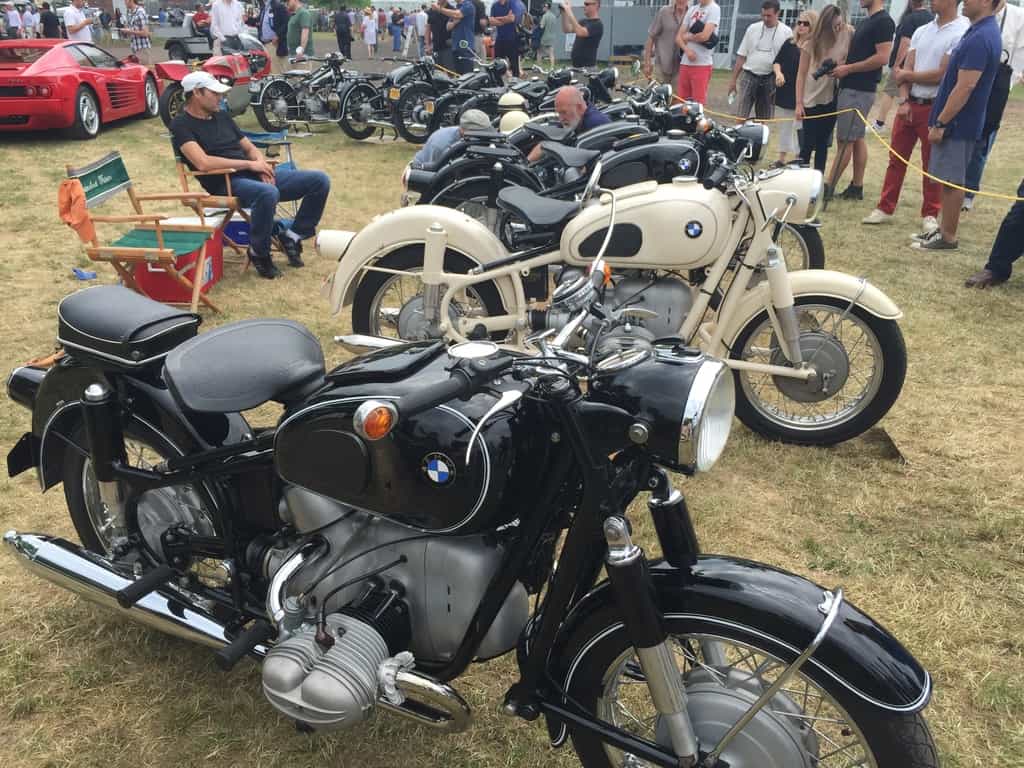 The Greenwich Concours D’Elegance is now in its 20th year. The show was founded by Bruce Wennerstrom and in its early formative years was heavily supported by legendary Greenwich Porsche/Audi/Volkswagen dealer Malcolm S. Pray Jr. Today the show is a must attend on the top Concours circuit.  Over the last decade it has earned the esteemed status of being mentioned in the same breath with gold standard shows like Amelia Island and Pebble Beach. This year I was invited to exhibit my collection of vintage BMW motorcycles. Each of these machines has undergone an extensive and accurate restoration so that they are as close to factory correct as possible. However, simply looking good is not enough. Each bike must be a running, rideable and fully functional example.

Early Sunday morning “Team Turtle” assembled at my garage. The Turtle Bayou Garage is my man cave in Bedford, New York. It takes a lot of people to get six motorcycles on the show field. Our team was comprised of Steve Landau (shipping and handling), Michael Rolls (logistical and technical support), and Clio Capuchino (who helps my wife and I with our horses and was in dire need of a day off the farm). Clio was instrumental in helping us get the cooler, center stand plates, umbrellas, and directors chairs to and from the show field. At about 7:30 am we finished loading up the 1936 R12, 1937 R5, 1937 R6, 1938 R71, 1961 R69S and the Dover White 1969 R60/2 and headed over to Greenwich. 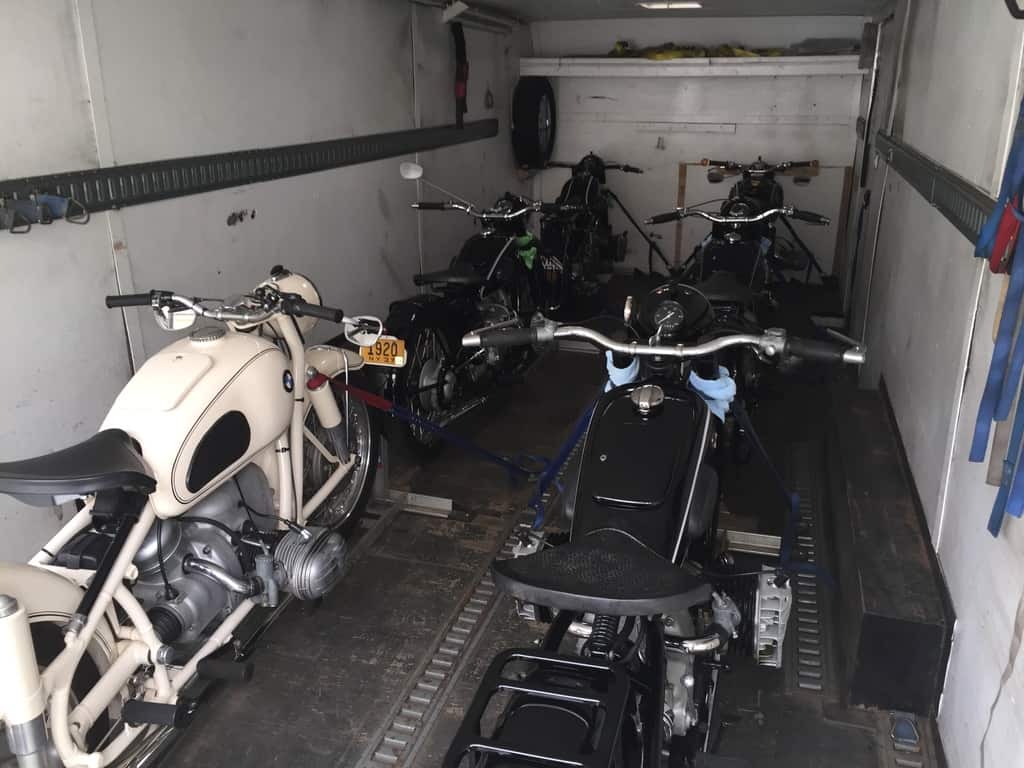 All six BMW’s were loaded up under the careful management of Steve Landau. 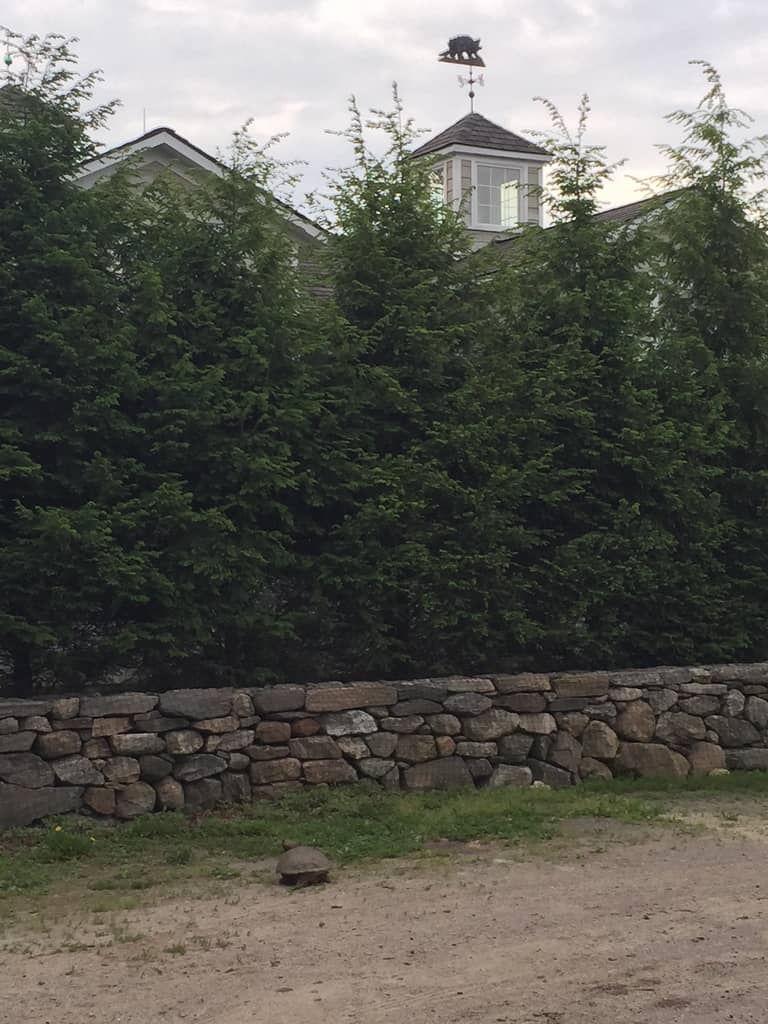 The Turtle and the turtle. We considered it a good omen that there was a huge snapping turtle in front of the Turtle when we departed for the show. Notice the turtle weathervane and the live turtle near the stone wall.

Upon arriving to the show we unloaded the bikes and took them all for a spin around the Greenwich train station parking lot. Every bike checked out great and ran in top form. Master mechanic Phil Cheney had spent many hours to get each bike running in top form.  The looks and sounds of these machines turned a lot of heads in the parking lot and when we actually rode each motorcycle onto the show field. 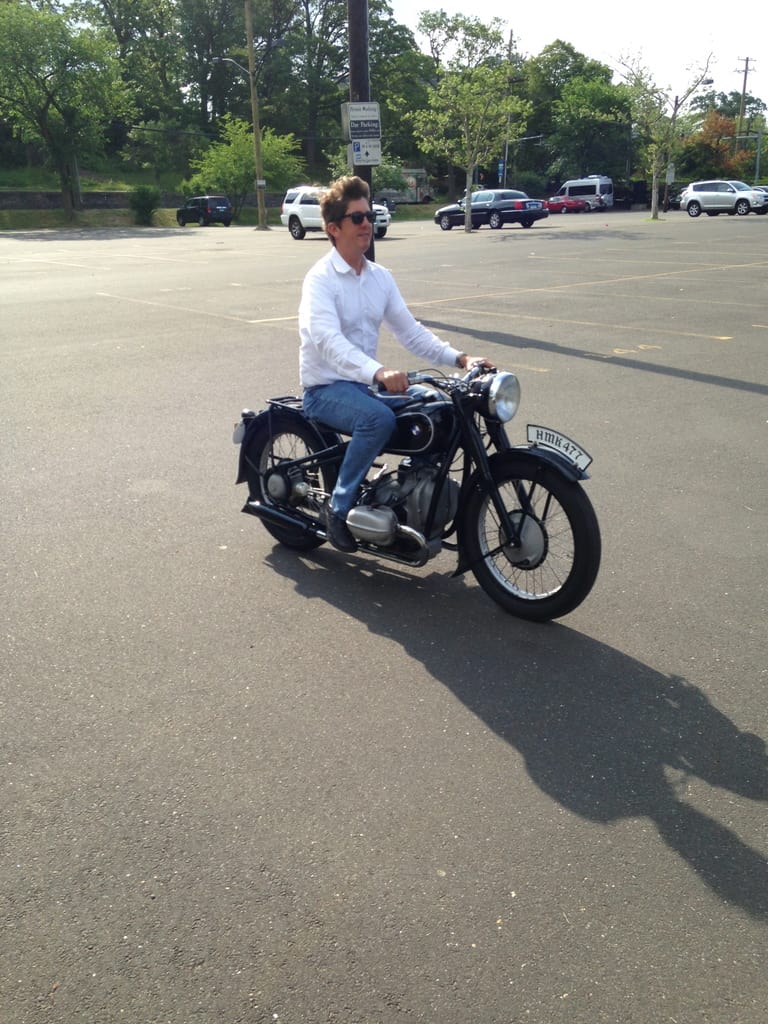 I found this old photograph of the 1937 BMW R5 being ridden by its former owner Henry Martini somewhere on a beach in England. Both of these photographs illustrate a timeless happiness that these pre-war machines give to their riders. 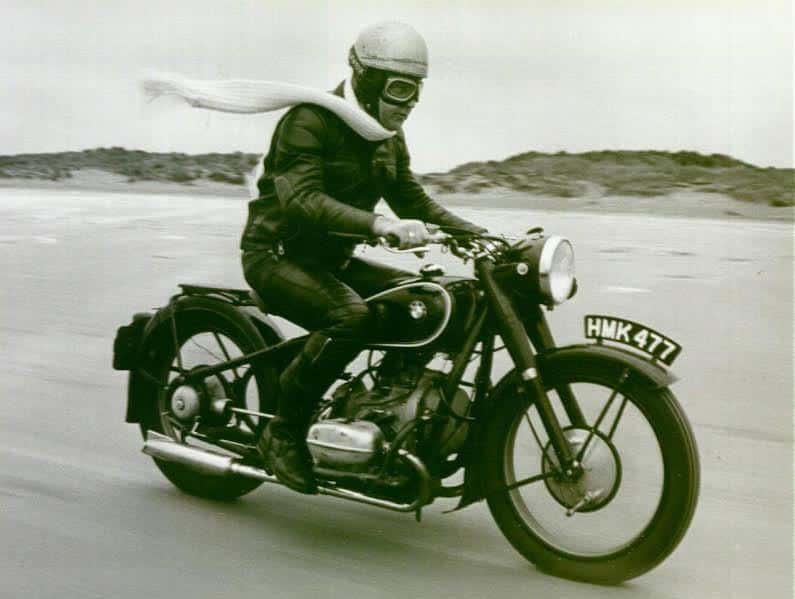 On the show field we had a strong showing of support for the BMW marque with several very high quality two-wheeled machines in attendance. Ted Main Smith brought his fabulous and flawless 1928 BMW R62 and Steve Bauer brought his pristine 1964 BMW R69S. Together we all had a great time. The beauty of this hobby is that you meet the most kind and interesting people. Something about old BMW’s attracts good people with a lot of passion. Just prior to the awards ceremony we all opened a bottle of Veuve Clicquot that I brought along and we celebrated our collective future victory.  We decided that somebody among all these wonderful motorcycles should win something and we had run out of will power. Corks went flying long before any awards were handed out!  Complete with plastic champagne flutes we polished off the bottle of fine bubbly from inside our roped off circle of machines.

Like a fan of playing cards on a blackjack table in Vegas, we had a slew of historically significant top quality BMW’s. 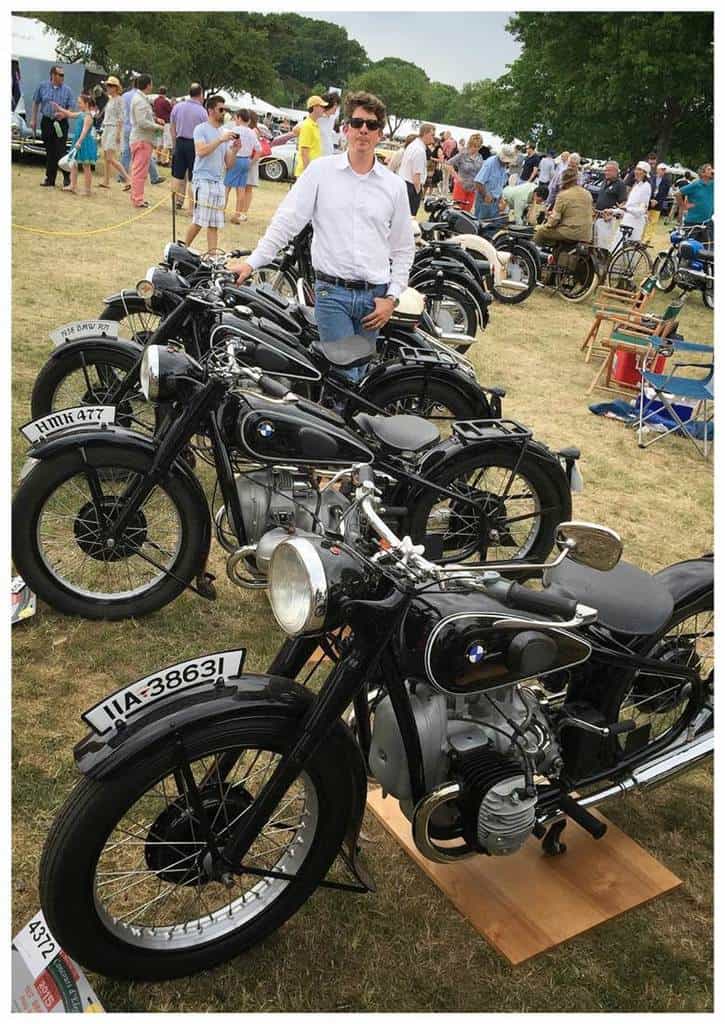 The collection.  Photo by Louise Wales. 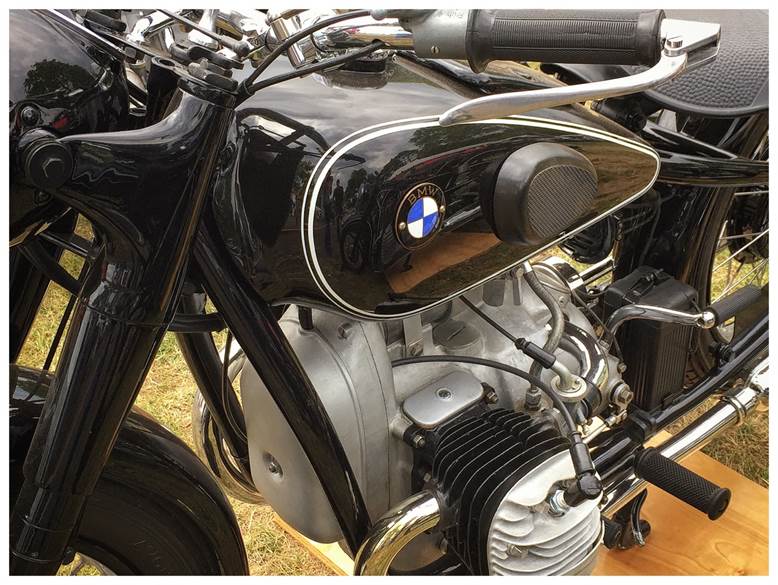 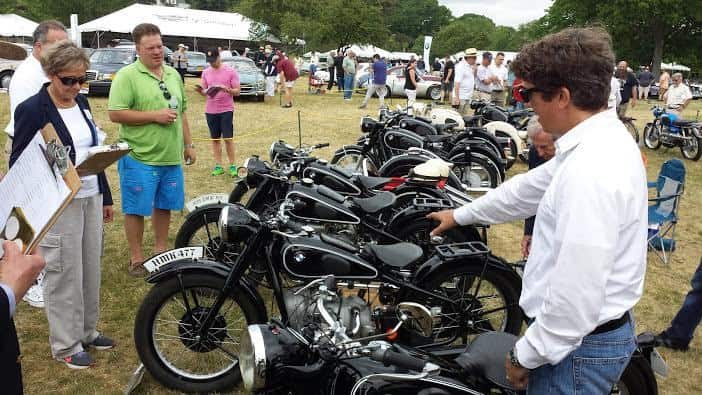 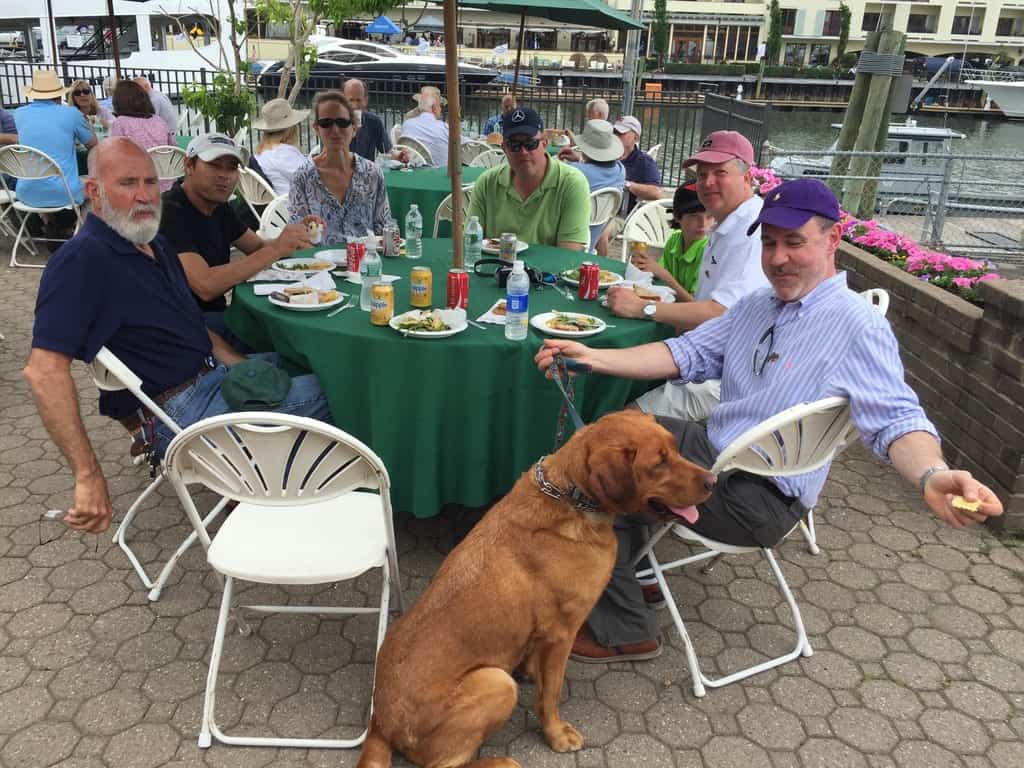 A wonderful harbor side lunch at the Greenwich Concours. John Pavone brought Reilly to join us.

Besides our BMW’s, there were also other great motorcycles on the field.  There was a rare MV Augusta, a beautiful Bultaco, and a 1917 Triumph (complete with a fully costumed owner who would regularly start up the bike like Old Faithful once a large enough crowd of people had formed). There were also a plethora of fantastic cars to drool over.  Some of the highlights were caught by my friend Dean Laumbach.  Special thanks to Dean for the following photographs. 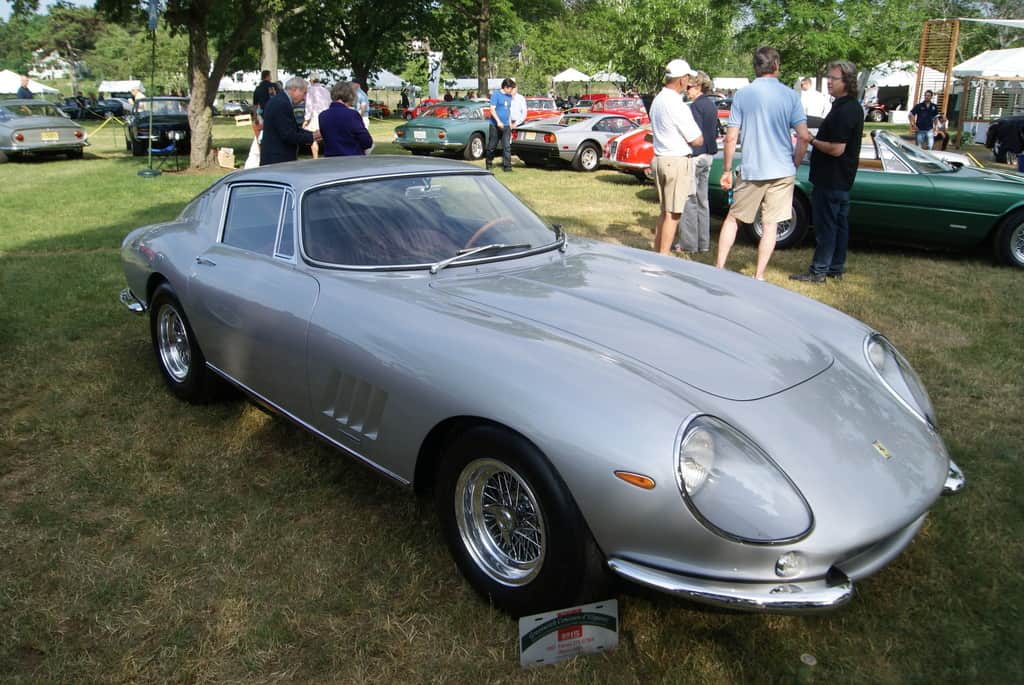 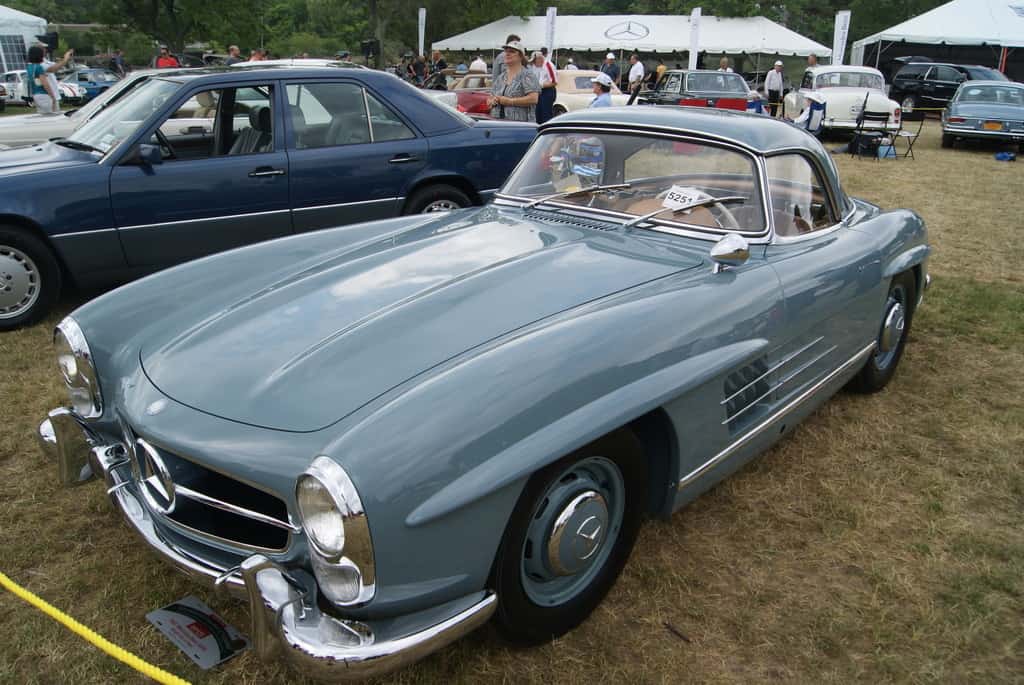 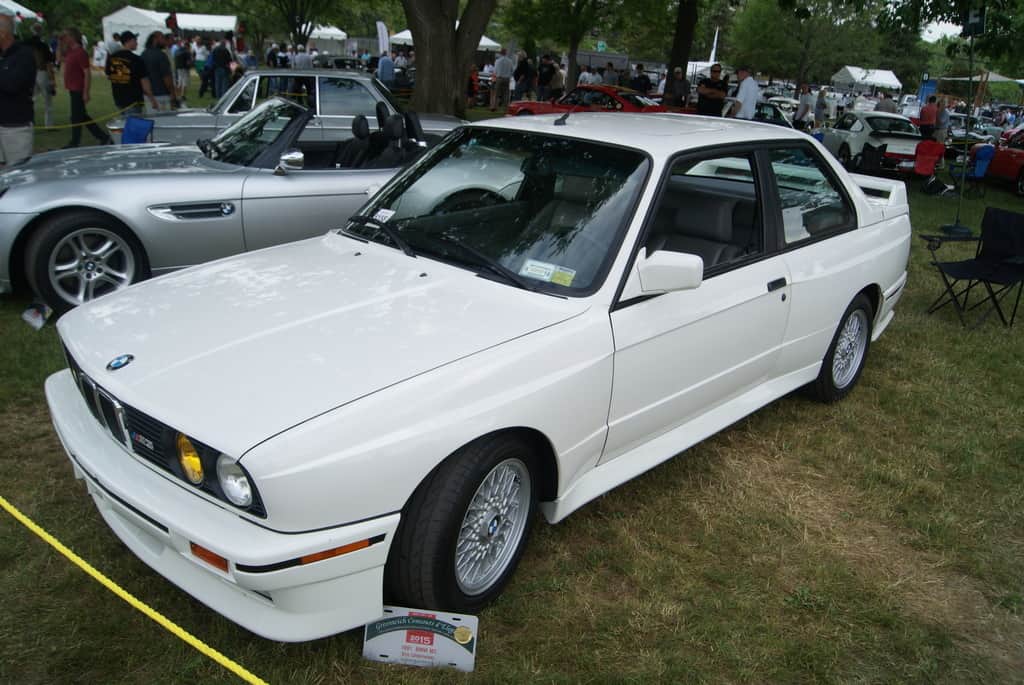 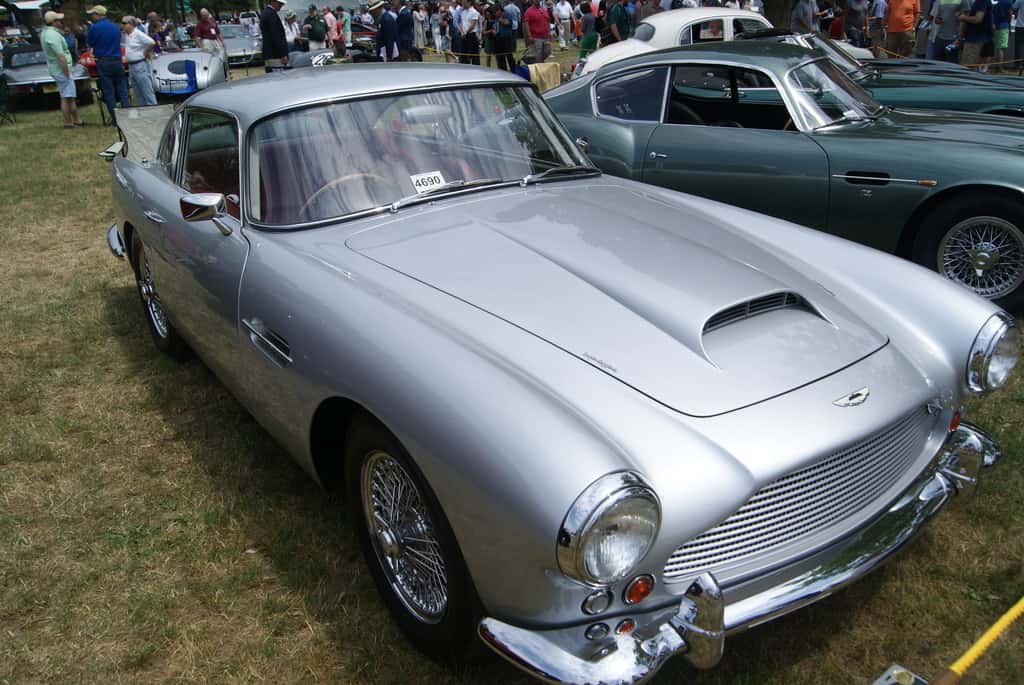 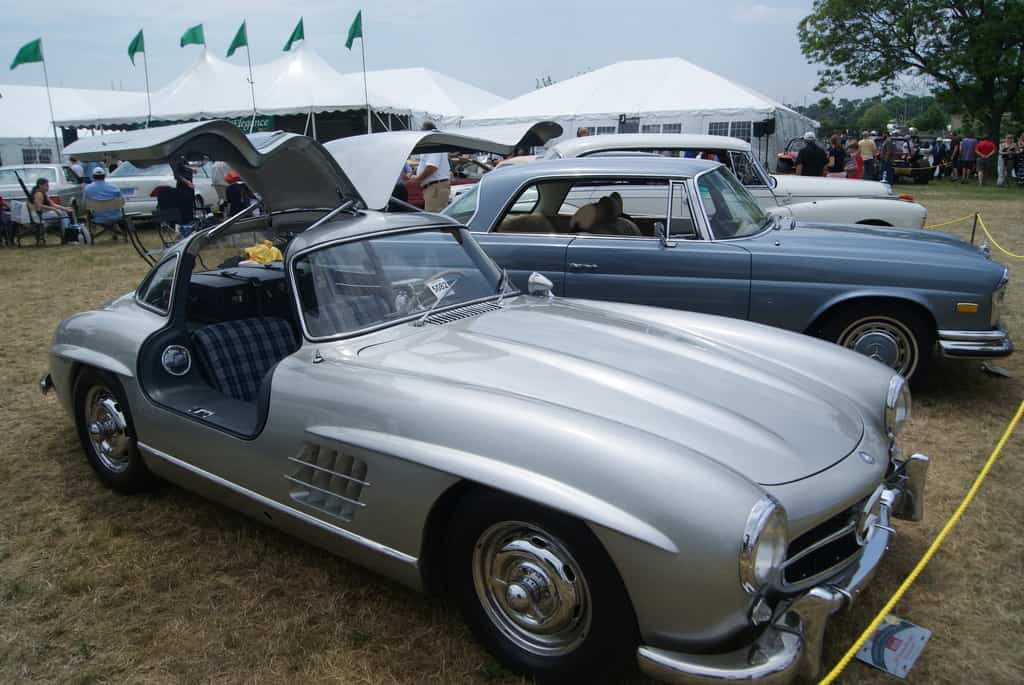 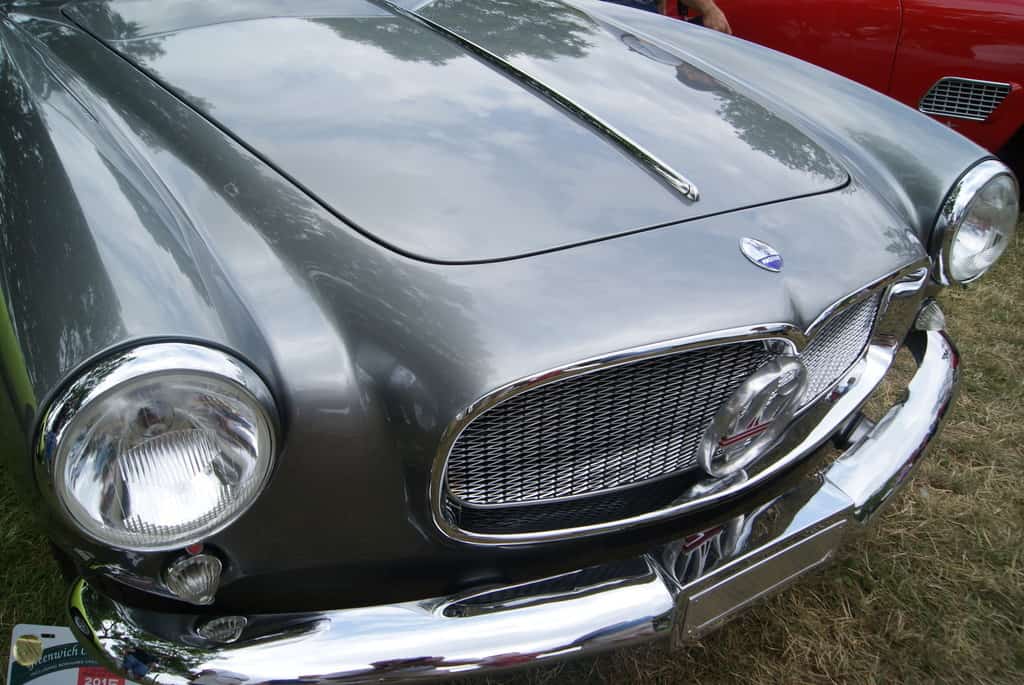 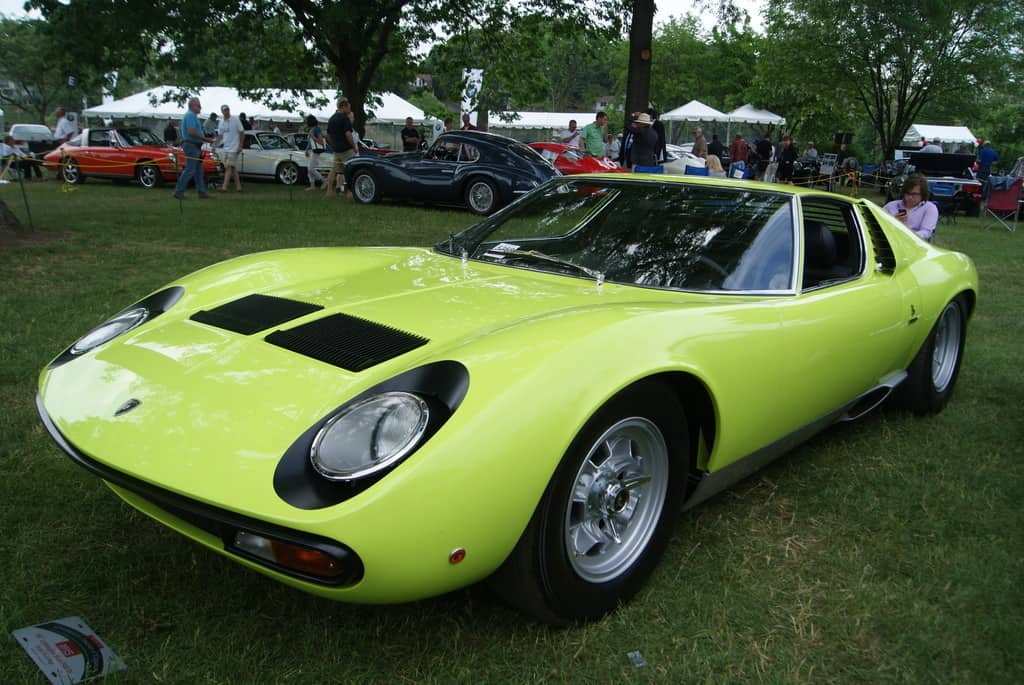 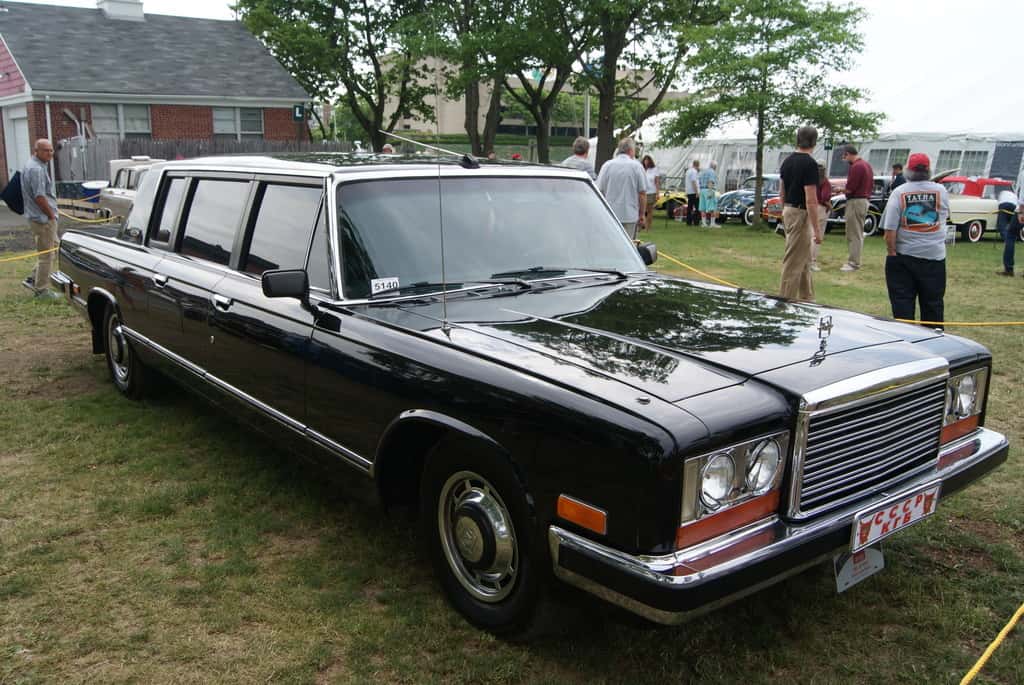 As the day drew to a close a rolling series of late afternoon boomer thunderstorms began to appear.  We finished our champagne, received our awards, and Steve helped us load up the bikes. My 1937 BMW R6 received the first prize award for the best motorcycle 1930 to 1945. John Pavone spent over 1200 hours restoring this landmark motorcycle and his skill and attention to detail really shows. Luckily we were able to leave just ahead of a massive electrical storm. The Greenwich Concours will not allow you to show the same vehicle until three years have passed so it could be years before we all get to share this wonderful show field camaraderie again. Either we all have to wait a few years or simply acquire more vintage motorcycles! All in all, it was a fabulous day spent with old friends and new friends and a lot of friendly strangers with many questions about the various motorcycles and their unique histories. These beautiful and timeless machines brought us all together. It was a magical day that none of us will soon (if ever) forget. 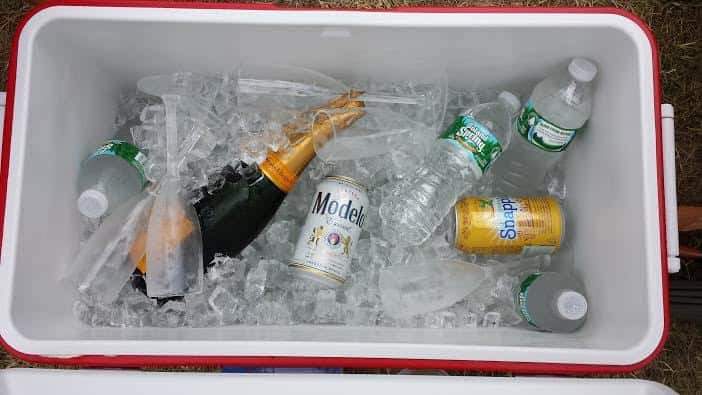 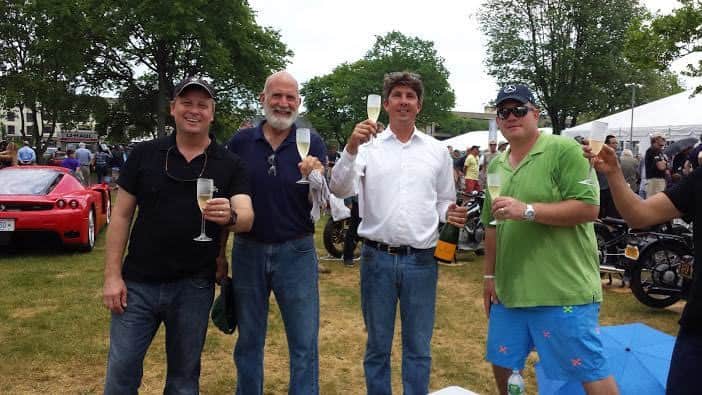