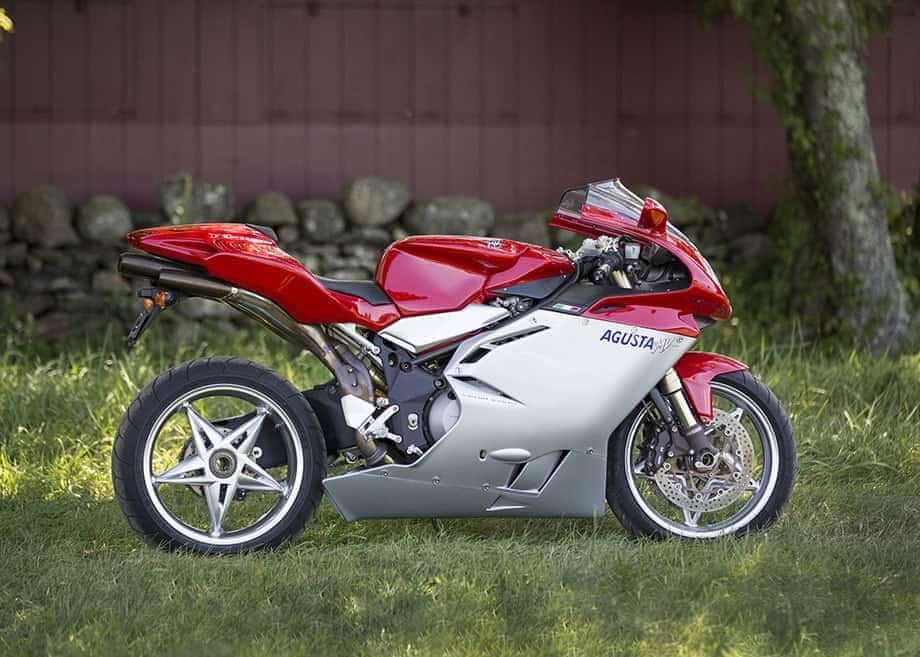 By Philip Richter on June 24, 2017 in History, Motorcycles

“The F4 has high-performance motorcycling history in its blood. It is the epitome of emotion, performance, speed and incomparable design.” -MV Augusta

The MV Agusta brand has roots that date back to the turn of the century. Giovanni Agusta founded Agusta Aircraft and became a dominant producer of airplane engines during World War I. He died in 1927 and the company subsequently faced a downturn in the aeronautics industry. In the 1930’s, demand in Europe increased for personal transportation and Giovanni’s descendants entered the burgeoning motorcycle market. The Company survived World War II and became a successful producer of motorcycles. As racing returned to Europe after the war, MV focused on innovation and technology and the Company ultimately became a racetrack legend during the 1950’s. In the 1960’s, car ownership surged and motorcycle sales trended downward. The Japanese invaded the market in the 1970’s and the last MV was produced in 1980. The brand was ultimately purchased and revived by the Castiglioni family’s Cagiva Corporation in the early 1990’s. The first model launched was the groundbreaking first-generation F4 in 1999.

A prototype of the magnesium and carbon fiber F4 750 Serie Oro was featured in the Guggenheim lobby during the famous 1998 “Art of the Motorcycle” exhibit. The Massimo Tamburini-designed F4 caused a sensation back then and still turns heads today. It’s futuristic, minimalist lines are truly motorcycle art. Priced at $24,000 when new (about $35,000 in today’s dollars), the sleek F4 had a steep price of entry. Today, the price of entry for an investment-grade sub-3,000-mile example of an MV Augusta F4 superbike is lower than you might think.

The F4 750 was eventually replaced by the next-generation higher displacement F4 1000S in 2005. Over the years, MV released several high-cost lightweight versions of the F4, including the Tamburini, Senna, and Veltro models. On the surface, these special edition bikes look like a run of the mill F4. However, dig a little deeper and you will find lightweight metals, carbon fiber, increased horsepower, and bespoke paint themes. List prices for rare edition F4’s were stratospheric. Today the secondary market for a Senna edition F4 is very narrow and sellers may need a lot of patience to realize an acceptable sale. While the special edition F4’s are rare, fast, and beautiful, the plain original red and silver model is my top pick. The standard model is pure, elegant, and wears the classic MV racing livery. Besides being the purest expression of Tamburini’s landmark design, the plain-Jane F4 is perhaps the greatest motorcycle value on the market today.

The F4 1000 4-cylinder radial valve engine shares bloodlines with a Ferrari F1 motor. This machine is a timeless classic with enough performance to put your eyeballs in the back of your skull—try 0-60 mph in 2.7 seconds and a top speed of 190 mph. (Warning: you will have to hunt for the right technician to work on it.) The F4 is equipped with a specially designed 50 mm Marzocchi front upside down fork and Sachs rear suspension and comes equipped with massive Nissin disc brakes. The organ pipe exhaust system exits high up beneath the rear cowling of the fender and gives the F4 a striking appearance that looks fast at a standstill.

Turtle Garage has recently been asked to provide content and commentary to the eBay Motors blog site. The commentary below relates to a 2006 MV Agusta F4 that is currently for sale on eBay. You can read our recently published eBay post here.

The 2006 MV Agusta F4 1000 listed here is a low-mile investment-grade example. With 2,600 miles, this adult-owned bike represents a unique and interesting find. The seller has disclosed a mild rock chip which can be easily corrected by any competent body shop. It comes with the correct and original rear wheel stand and factory cover. The bike is currently configured with an aftermarket exhaust but the original pipes are included in the sale. This machine appears to check all the boxes. Purists and collectors would probably return the exhaust to stock and correct any paint blemishes, however, as a driver it appears to be ready to ride. Be sure to budget accordingly for a comprehensive service as low-mileage machines can often need sorting because of time. MV Agusta is a storied brand with DNA that includes a long and successful racing history. The F4 1000 is a comparatively rare machine that represents an excellent value in the current market. Let the bidding begin and put a rare Italian superbike in your garage!

The F4 does not look like any other motorcycle. 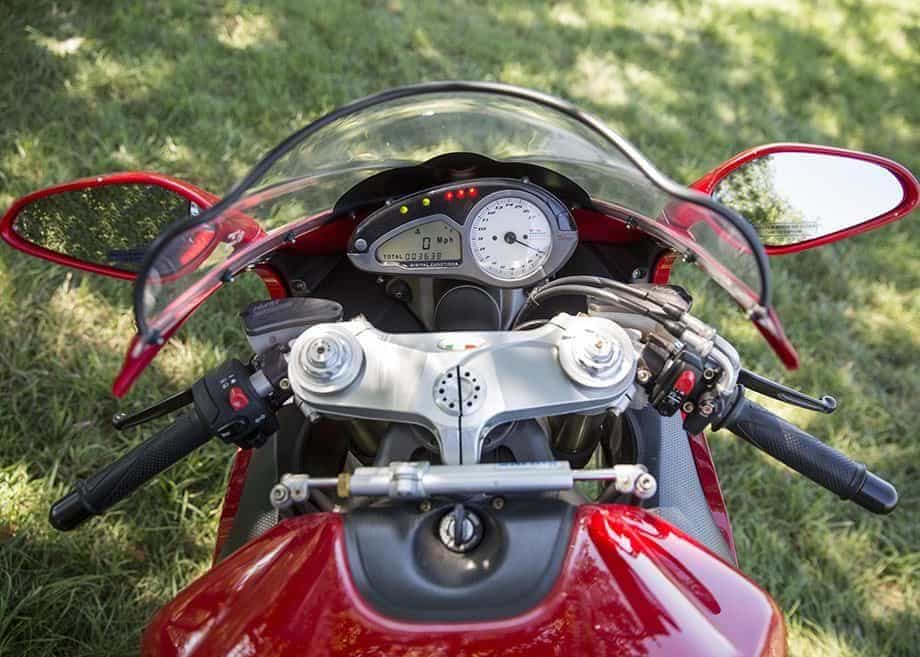 The instrumentation is modern for a machine that is over twelve years old. 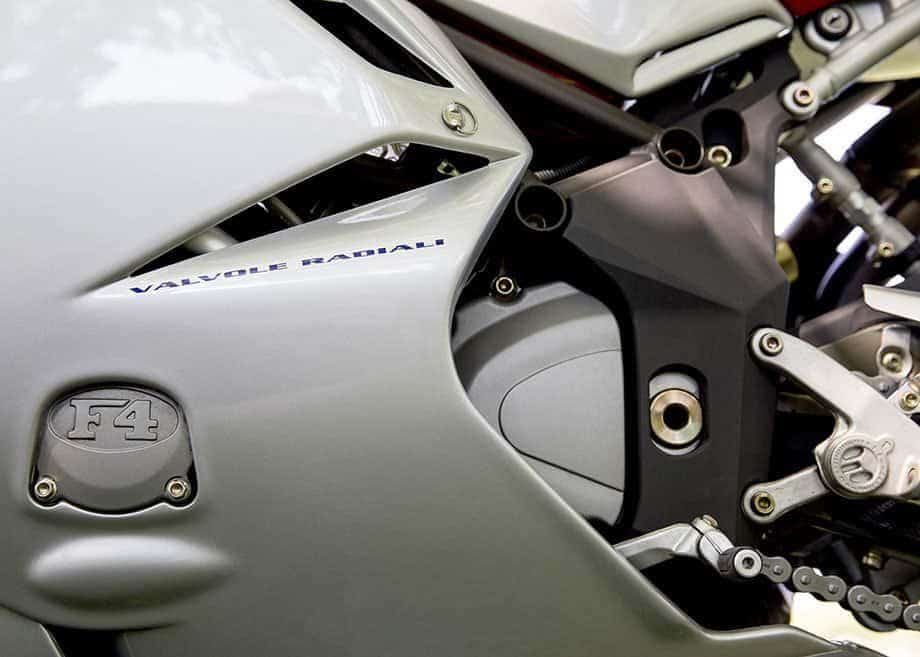 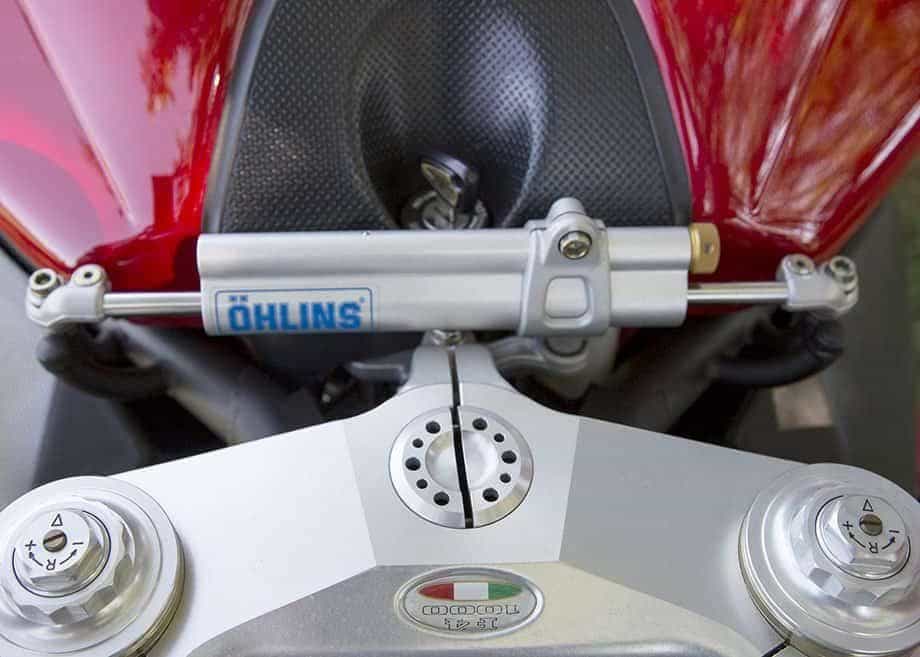 High-quality components are a hallmark of MV Agusta. 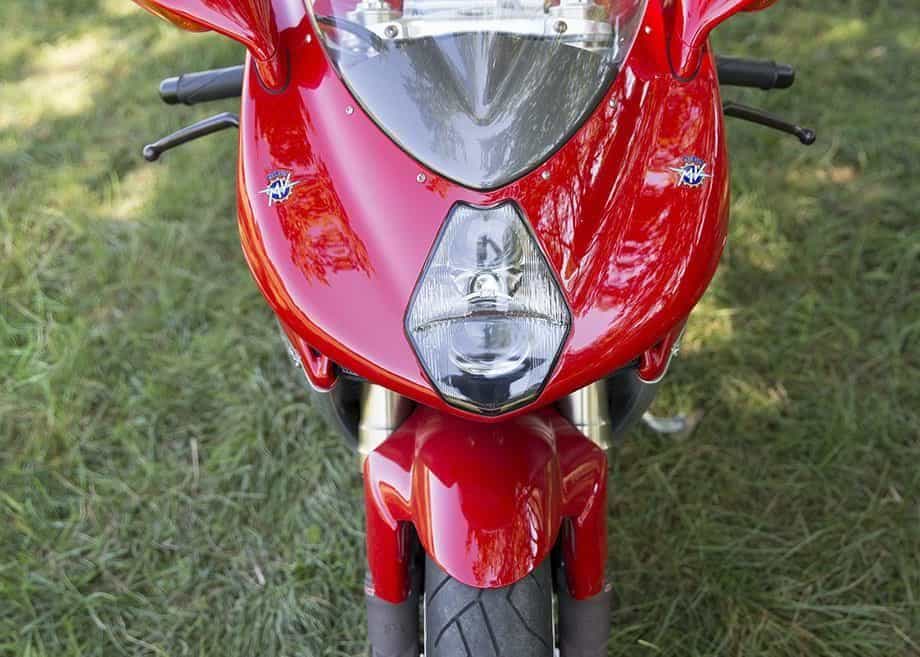 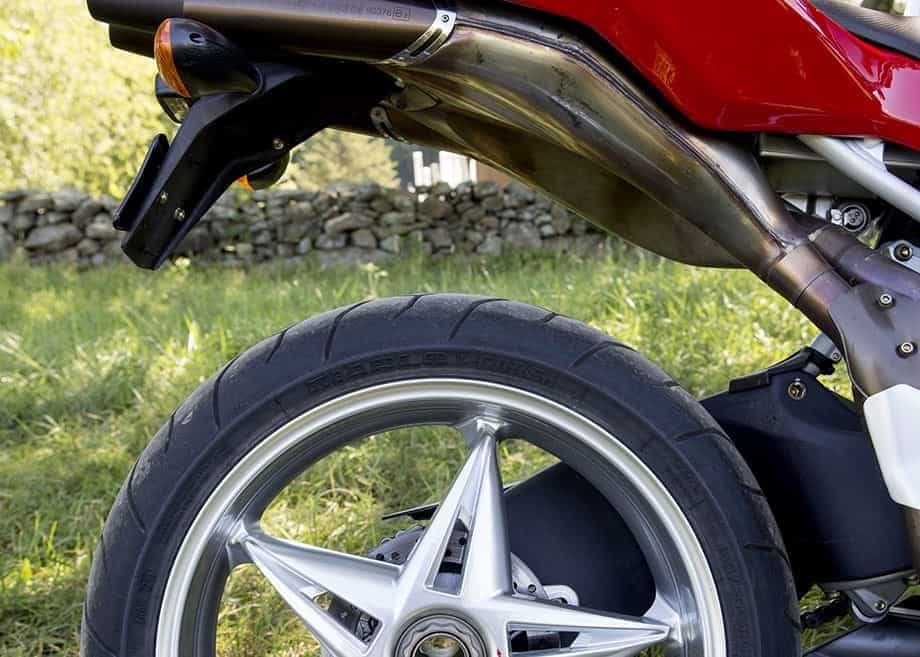 The organ pipe exhaust is really a unique design element. 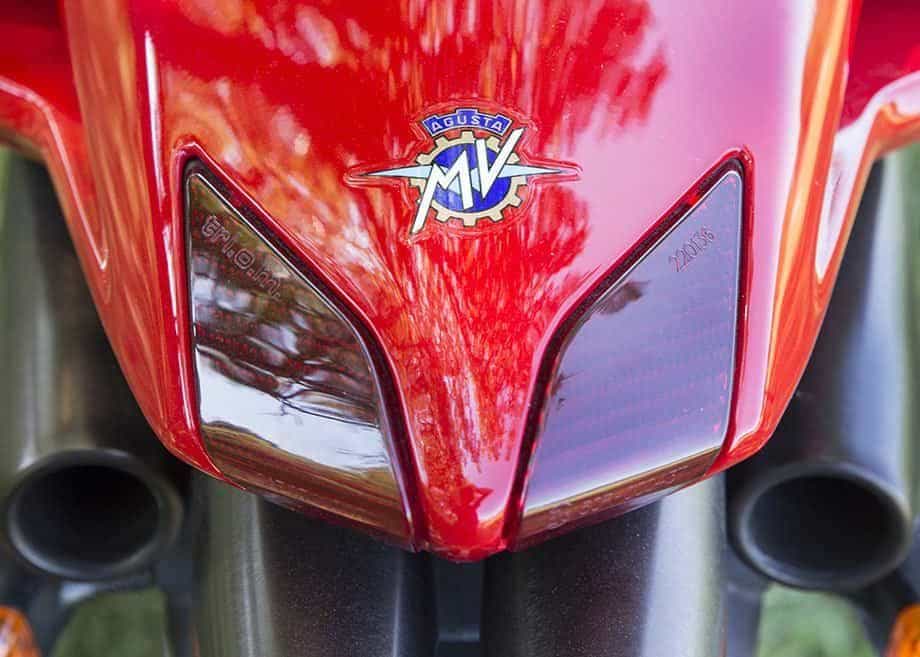 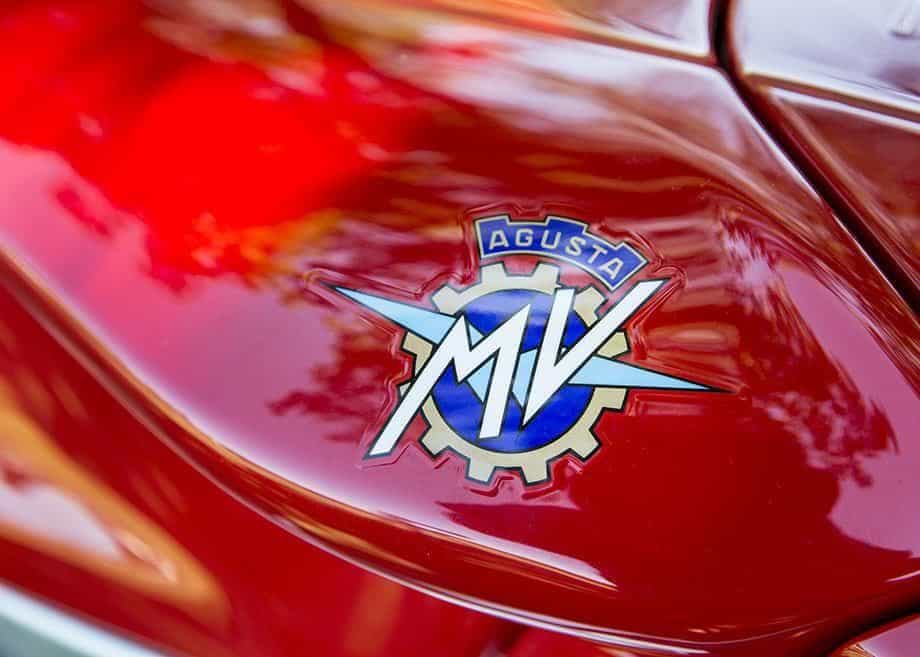 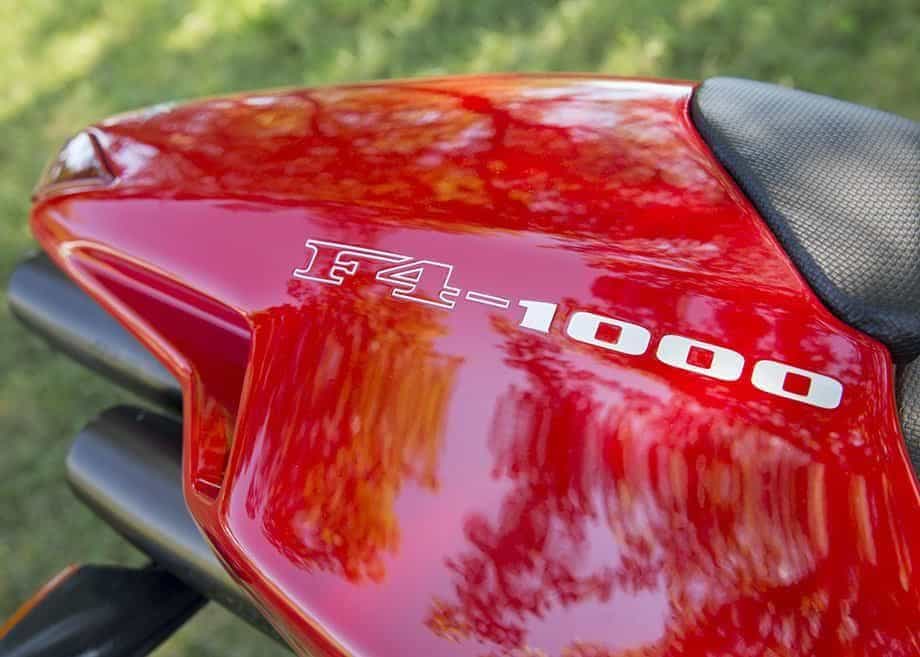 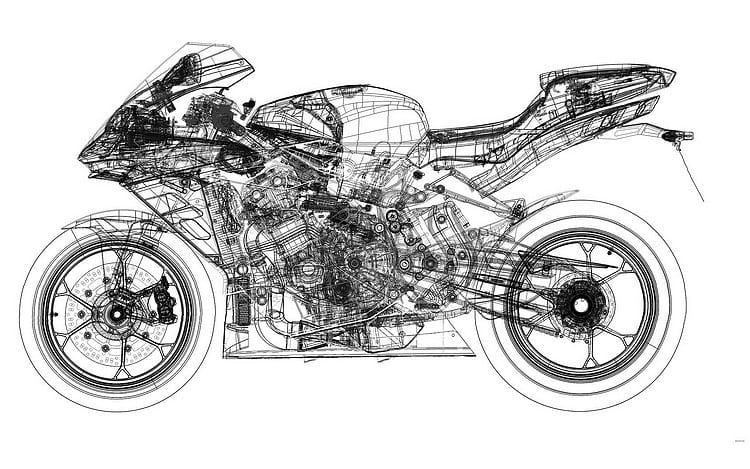 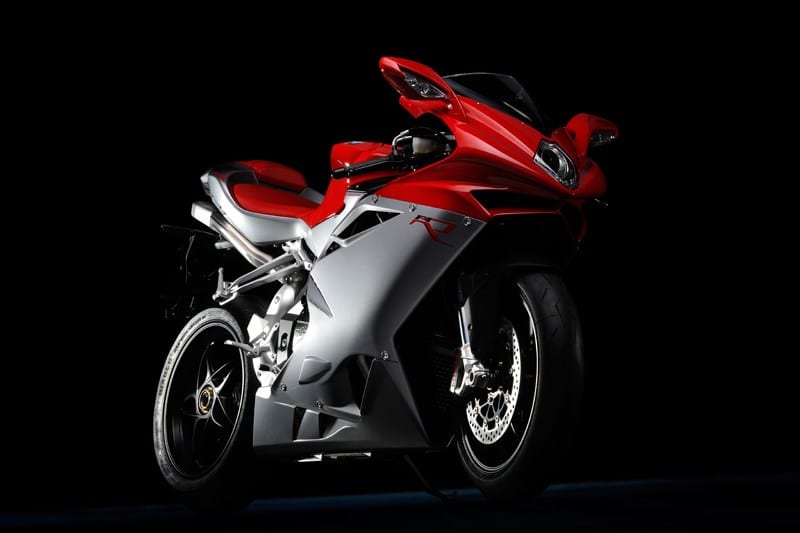 Philip Richter is President and co-founder of New-York-City-based Hollow Brook Wealth Management, LLC. The Turtle Garage Blog, he says, is dedicated to his "love of excessive personal transportation."
View all posts by Philip Richter →
The Dark Side of a Great Company: BMW’s Ties to the Third Reich
Turtle Garage Now on Instagram @turtlegarageblog