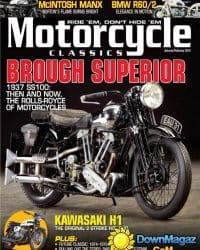 The Apple computer I’m using as I write this story and its subject matter, a BMW R60/2, have something in common. In the early 1980s, long before Apple and its iProducts were household names, Steve Jobs, the enigmatic mind behind the company, rode around San Francisco on a 1966 BMW R60/2.

When Jobs wasn’t riding it, the BMW was parked in Apple’s atrium lobby. Walter Isaacson, author of the 2011 biography/autobiography Steve Jobs, wrote, “Over time, the atrium attracted even more toys, most notably a Bösendorfer piano and a BMW motorcycle that Jobs felt would inspire an obsession with lapidary craftsmanship.” The word “lapidary” has a couple of definitions, one of them being “careful, elegant and dignified in style.”

It’s clear that Jobs felt classic BMW motorcycles offered refined elegance and dignified grace, especially in the case of machines built in the 1960s. In this era, BMW offered multiple models, including the R50/2, R60/2 and the R69S. All of these machines shared the same chassis, but were powered by either 494cc or 594cc engines in different states of tune.

Between 1955 and 1969, BMW built the low compression 500cc R50, the high compression R50S, the low compression 600cc R60, and, as introduced for 1956, a high compression R69. Technically, only machines constructed from 1960 to 1969 carried the Slash 2 or /2 designation. 1967-1969 telescopic fork versions of the R50, R60 and R69 all carried the US designation instead of Slash 2 as they were for the U.S. market only. Now, however, many enthusiasts refer to the entire series as Slash 2s. Thanks to their stout and rigid double-loop steel frames with sidecar mounting points, these BMWs were commonly hitched to chairs.

Best of the bunch

According to Philip Richter, a New York-based BMW aficionado and owner of the 1962 BMW R60/2 gracing these pages, the R60/2 is the best of the bunch. “My opinion is subjective, of course,” Philip says, acknowledging his owner bias, “but the R60/2 has a Zen-like balance. It’s true the R69S motor delivers more horsepower, but it’s heavier. The power-to-weight ratio of the R60 is superior to either the R69S or the R50. I own all three versions, and the R60 is the best of that ilk.”

Philip comes by his fascination with German motorcycles quite honestly. His dad, Max Richter, grew up in postwar Germany and rode a small Zundapp motorcycle. It made quite an impression as he spoke of it often, and with great affection. When Philip was 7 he was given a 1977 Honda Z50, which he used to blast around the Bedford, New York, horse farm where he grew up. He and his brother Hans eventually built a motocross track, and moved up to larger machines.

Philip never thought about a street-going motorcycle until 1992. That’s when he was enrolled at Boston College in Chestnut Hill, Massachusetts. “In your junior year they make you live off-campus, plus there’s just no parking anywhere to be had,” Philip recalls. “So, I decided to buy a motorcycle to make the 3-mile commute, because there was no reliable public transit where I lived. I used to ride straight up to the O’Neill Library and leave my bike there and head off to class.” His machine of choice was a brand-new 3-cylinder 1992 BMW K75S. “At the time, my brother had an R90/6. I loved the look of that air-cooled bike, but at 22 years old I wanted something sportier.”

The K75S served Philip well, and he treated it with respect. Phil Cheney at the now-defunct BMW Lindner Cycle Shop in New Canaan, Connecticut, took care of routine maintenance and repairs on Philip’s bike. “Whether it’s a model built in 1923 or 2015, he’s a genius and simply loves BMWs, but he particularly appreciates vintage BMWs,” Philip says of Phil’s expertise.

Through Phil’s influence, Philip’s interest in vintage BMWs began to blossom, and in 2000 he bought his first — this 1962 R60/2. It was completely restored by its previous owner, Bill Dauphinais, with Phil’s help. Bill took the BMW apart in his basement, and had Phil take care of the more intricate pieces such as the engine, transmission and rear drive. Bill looked after all other aspects of the rebuild, with the exception of spraying the Dover white paint. That paint, Philip says, is “buttery thick with a high gloss; it’s just exquisite.”

Although it seems like most Slash 2 BMWs were painted black with white pinstripes, that wasn’t always the case. According to BMW enthusiast Jeff Dean, who runs BMWDean.com, the Dover white color came about thanks to U.S. BMW importer Butler & Smith’s Michael Bondy. Apparently, he sent a can of the white paint that was used on his vintage Packard to BMW, who were able to reproduce the color. With that, Bondy ordered 50 BMWs in Dover white.

Another feature of the Slash 2s that made them a popular sidecar hauler is the Earles front fork. A leading-link design developed by Ernest Earles and patented in 1953, the Earles fork doesn’t dive under braking (actually, the bike tends to lift from the forward weight transfer induced under braking) and is stronger than a conventional telescopic design. It has dual oil-filled shock absorbers with springs, and the swingarm features two pivot positions for either solo or sidecar riding. A noted feature of the Earles fork is its extreme rigidity.

All Slash 2s featured BMW’s air-cooled boxer engine — so called because its horizontally opposed pistons move apart and together at the same time. Legend has it that Adolph Hitler coined the phrase while visiting a BMW engine factory because the moving pistons looked to him like a boxer slapping his gloves together. The boxer engine design has long been appreciated for smooth running thanks to its almost perfect primary engine balance.

According to Jeff Dean’s information, BMW produced just 700 R60/2s in 1962, its first year of manufacture, with a total of 16,870 built over its 1962-1969 lifespan. The R60/2’s engine has a bore of 72mm and stroke of 73mm, giving almost square dimensions and a total of 594cc. Compression is 7.5:1 and the engine makes 30 horsepower at 5,800rpm. A Bosch magneto provides sparks and is independent of the rest of the electrical system, although it resides under the front engine cover along with the 6-volt Bosch generator. The timing gears and oil pump are also at the front of the one-piece engine case, which features a car-like oil pan at the bottom.

The cylinders are cast iron, topped with aluminum cylinder heads featuring a single intake and exhaust valve each. (As a note of interest, the valve covers on both the R50/2 and R60/2 have six horizontal fins — the higher-horsepower S models have two cooling fins per cover.) Exposed pushrod tubes run above the cylinders, with rubber seals at the crankcase side and press fit at the top of each cylinder; an oil return passage on the underside of each cylinder lets oil drain back into the crankcase. Carburetors on the R60/2 are a pair of 24mm Bing “Spezials” with integrally cast float chambers. The carbs are flange mounted and set at a 15-degree angle toward the engine.

A single dry-disc clutch connects the engine and 4-speed transmission, while a driveshaft, a BMW hallmark since the R32 of 1923, delivers power to the rear wheel. The enclosed driveshaft runs in oil in the right side of the swingarm. Properly maintained, the engine and drive system are very oil-tight.

The rear shocks are oil-filled and spring loaded and are virtually the same as the front shocks suspending the Earles fork, with the exception of spiral adjusters built into the lower shock housings to alter preload for solo or two-up riding. Up front, brakes are full-width twin-leading-shoe and the rear is a full-width single-leading-shoe. The 2.15 x 18-inch 40-spoke wheels spin on tapered roller bearings, and are interchangeable front to rear.

“Bill finished the restoration of the R60/2 in 1995, and kept it for five years,” Philip says. “He had retired and was moving to Arizona, and I managed to swing a deal for close to $6,500 for the bike.” When Bill restored the BMW he opted to fit deeply flanged alloy rims and the lower Euro-spec handlebar. Slash 2s destined for the U.S. came with a taller, braced handlebar.

For several years after buying the R60/2, Philip rode the bike as much as possible, and would go just about anywhere on it. The odometer currently reads 62,500 miles, but it wasn’t reset during the restoration and Philip’s unsure how many of those miles he’s actually accumulated.

Philip has made a few changes since acquiring the BMW. He added the period accessory Albert mirrors that attach to either side of the headlight, and when the original exhaust system rotted out he upgraded the pipes and mufflers to stainless steel. Philip laments the fact the exhaust is not authentic, but he’s happy he doesn’t have to worry about the system rusting out. Also, Phil Cheney thought the Pagusa rubber solo saddle should be changed to a Denfeld, so Philip made the switch.

In the interest of safety, Philip updates his tires every three years. “I’m in the wealth management business,” he says, “so for me, motorcycling is all about managing risk. When it comes to tires, I don’t cut corners.” He keeps the valves adjusted and the oil changed. “Other than that, the bike just runs. I think I could get on it and ride to San Francisco without it missing a beat.”

So, having said that, what’s it like to ride? After opening the single petcock on the left side of the gas tank (BMW offered the R60/2 stock with a 4.5-gallon tank, or an optional 6.5-gallon vessel — Philip’s has the larger of the two) and tickling each carb for about three seconds to allow gasoline to raise the floats, Philip says it takes just one very light kick on the left side starter for it to fire up.

“On the road, this bike generates a lot of acceleration and power, and it doesn’t mind being pushed into the higher rev-range,” he says. “I can keep up with all of the modern bikes, but the biggest issue with the older machine is stopping — it just doesn’t stop that quickly. The transmission is silky smooth shifting, and when you’re cruising the whole affair is an effortless flutter amid a symphony of beautiful sounds.” Looking back, perhaps that’s why Steve Jobs included the grand piano beside his Slash 2 in Apple’s lobby. MC 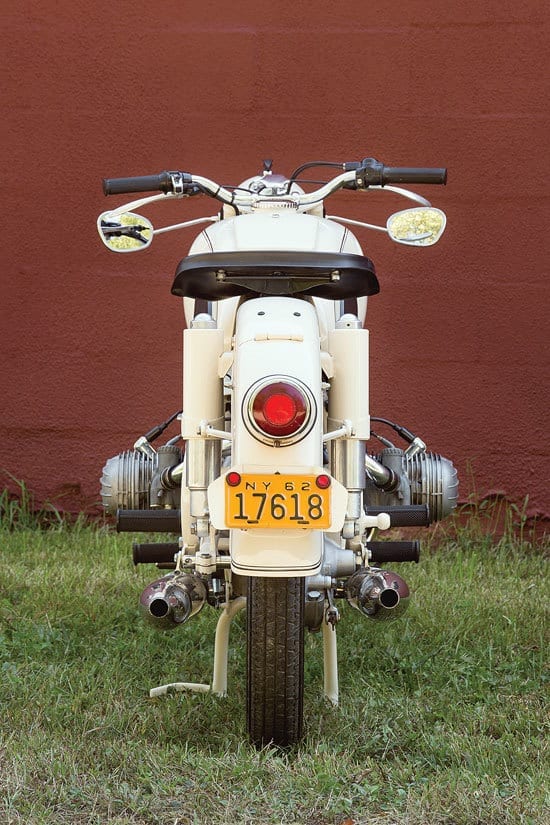 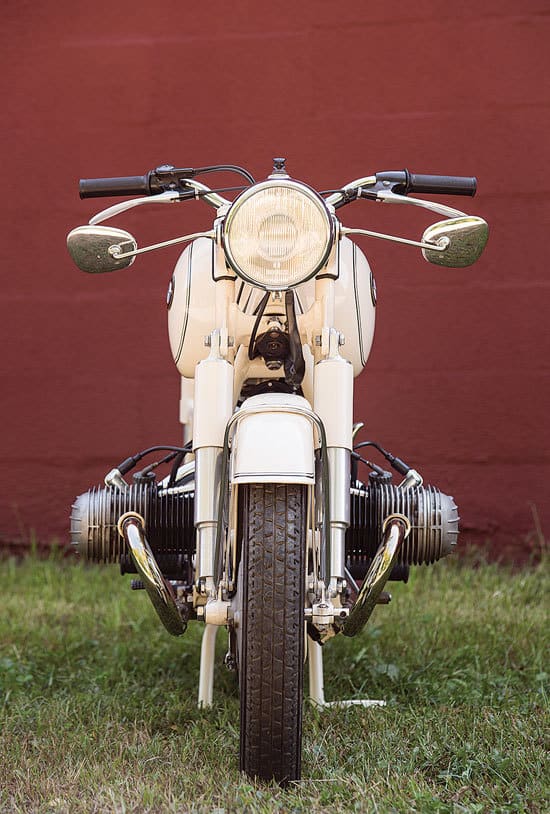 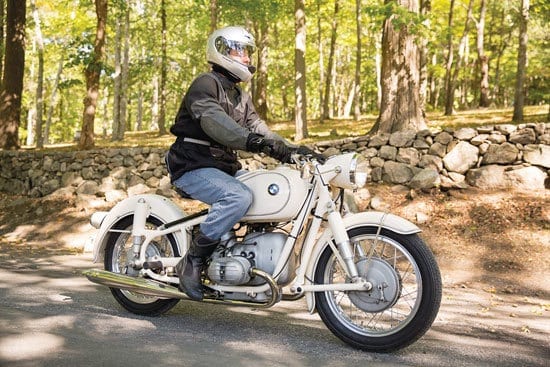 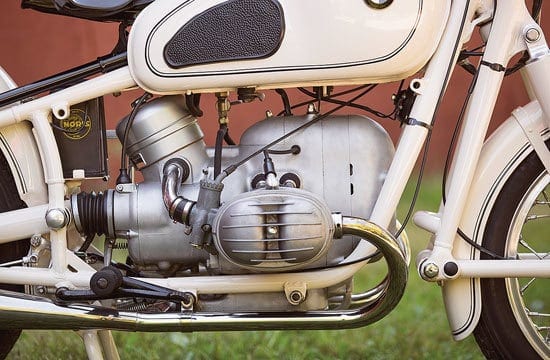 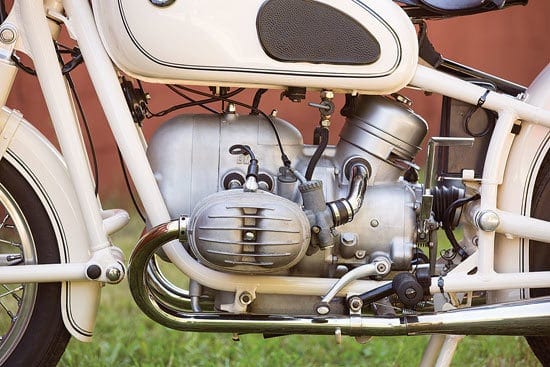 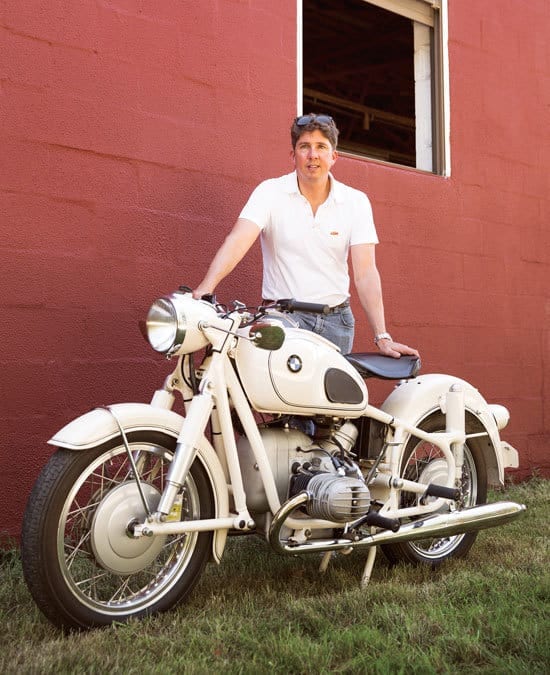 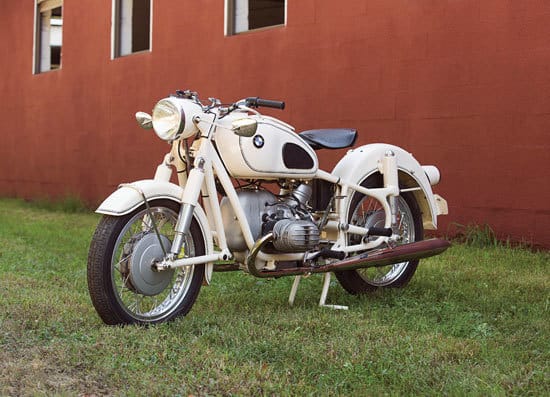 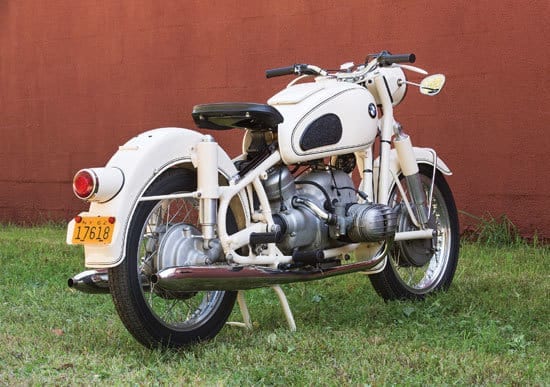 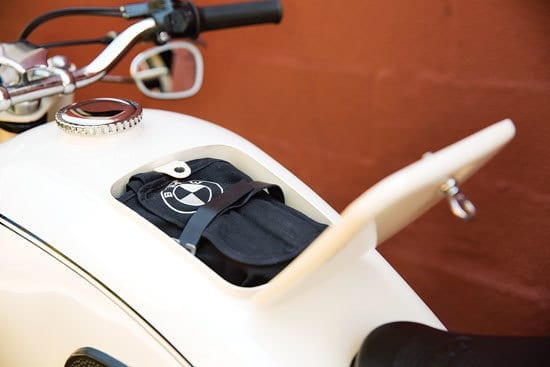