“The Bimota YB10 is a marriage of performance, utility, and singular Italian engineering. With only 224 total examples created, the Dieci (“ten”) remains a hallmark in Bimota’s progression and is an undervalued classic.”

Before the Coronavirus lockdown, I found myself flipping through the Las Vegas Mecum motorcycle auction catalog. Several motorcycles caught my eye. I have always lusted after the iconic Honda RC30 and the two-stroke Honda NS500—as luck would have it there were two excellent ultra-low mileage examples in the catalog. As I flipped through the pages, I also came across a rare Bimota YB10. Bimota is an obscure brand revered by true motorcycle fanatics for their over-the-top engineering. Back in the ’70s and ’80s, the company crafted advanced hand-built frames and installed motors from Ducati, Yamaha, Honda, and other manufacturers. Their goal was to create custom production motorcycles that out-handled and outperformed high-volume production versions made by the likes of Honda and Yamaha. Each Bimota was a hand-made obsessively engineered piece of art. I recall seeing one at a dealership in the late 1980s and being astounded at its astronomical price.

The Bimota YB10 for sale at Mecum had delivery miles and was one of only 224 examples produced. I started doing some digging. It turned out these were extraordinary motorcycles. This particular model was the tenth Bimota made with a Yamaha engine. The power behind the YB10 is a four-cylinder 5-valve 1,100 cc engine mated to a five-speed transmission. The fairing and fit and finish are what you would expect from a bike that cost $27,000 back in 1992. In person, the bike is stunning eye candy.

My good friend Mike from Vintage German Motorcycles attended the auction. I asked him to bid on the YB10, and we put in a very low ball bid. When the bike rolled across the block, few bidders raised their paddles—crickets in the stands, on the phone, and the internet. The worst enemy of a no-reserve auction is an empty room. The auctioneer kept calling out, “do I have any other bids?” There were no other bids. The auctioneer then reminded the audience, “this is a rare and desirable Bimota YB10 with only DELIVERY MILES!” Mike aggressively moved to push Mecum to end the auction, and finally, the bike rolled off the podium with an embarrassingly low hammer price. Watching the sale on the live stream, I thought to myself this is either a terrible example or a model nobody wants to own. Well, quite the contrary. The YB10 is an impressive machine, and its a legitimate Bimota. This particular example is 100 points and in perfect condition—with 20 delivery miles.

Even a blind squirrel gets an acorn from time to time!

I dug around on the web and found several interesting articles about Bimota and specifically the YB10. There is a significant amount of history on the Wikipedia page located here. Ironically, several years ago, Sports Car Market did a comprehensive review of a YB10 sold at auction. Enjoy the other article and learn more about this storied and now-defunct brand. Bimota was an industry first, and there will never be anything like it again. 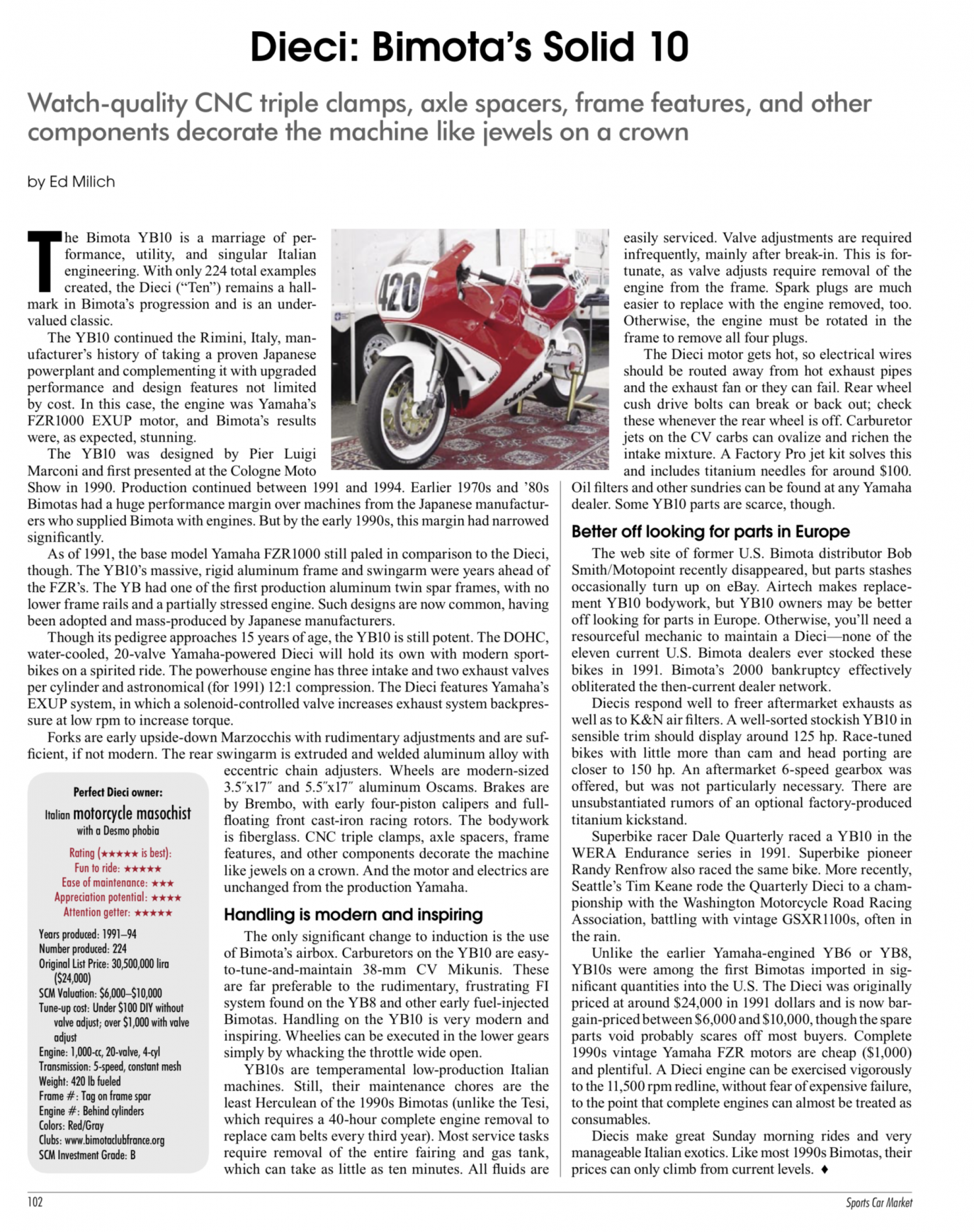 The year was 1991, George Michael and Elton John didn’t want the sun to go down on them, it all kicked off in the Gulf and I watched too much Paris-Dakar, purchased a Super Tenere and quite promptly fell off it. The Bimota brand was way above my station, a fantasy never to be fulfilled and just admiring a YB8 at Box Hill one Sunday morning would put a dampener on my bacon butty. The spec went someway to explaining why this Italian was twice the price of the best Jap crotch rocket but without sampling, bum on seat, for me it just didn’t add up. Back then a road test was unlikely, who would trust your average bike chucker with £15K worth of thoroughbred, that was five Lada Riva’s in car money. My Bimota moment did finally arrive and even though it’s 26 years on I didn’t have to be asked twice. Ok, so I am carrying an extra stone or two, I can still twist the grip whilst my YB10 Dieci companion hasn’t aged a bit, unmarked after travelling just 4k miles but before we make noise together a history lesson might be appropriate.

The small coastal resort of Rimini was the birthplace of a motorcycle ‘dream factory’ and the inspiration behind it came from one-time central heating engineer Massimo Tamburini. His aim was to produce his own chassis with weight saving qualities whilst retaining rigidity, into this frame he installed the most suitable manufacturer engine, complimented by the best of the best running gear. With two business partners Bianchi and Morri, the first two letters of the three entrepreneurs were combined to form the name Bimota; this was 1973. After some racing success via the World 350cc Championship and World Endurance the first road bike came to market using the power plant from Suzuki’s GS750, the SB2 in 1977.

Space frame chassis and mono-shock development owe much to the Bimota engineering advancements and Kawasaki joined the fold with a tuned 903 or 1015cc from the Z range. Both Yamaha and Ducati received the Bimota treatment during the 1980s although the company was often skimming across the lake of bankruptcy. Tamburini left to go GP racing with Roberto Gallina before taking a design job with Cagiva; this eventually resulted in the marvel of Ducati’s 916. In 1985 Bimota went under controlled administration but two years later won the Formula One Championship with Virginio Ferrari on the YB4 using Yamaha’s FZ750 motor.

By 1990 Pierluigi Marconi was head of design and the Tesi prototype was completed, initially with a Honda V4 and later Ducati’s 904cc V twin; the real news was the bikes hub-centre steering. The words ‘forefront’ and ‘cutting edge’ sit well with the designs flowing from Rimini but they complimented their ingenuity with the finest parts available. In 1991 the first of 224 (total production) YB10 Dieci machines arrived featuring many of the best bits from previous models. Named Dieci (ten) in recognition of the 10th collaboration between Bimota with Yamaha it featured Rimini’s bespoke beam frame combined with Yamaha’s 1002cc 5 valve motor. The Japanese engine was trusted by the Italians having been installed in the YB8 but with the Dieci a reversal of fueling system allowed for 38mm Mikuni carbs to replace Yamaha’s injection system.

Chief engineer Pierluigi Marconi confirmed that the company wanted to make the riding experience of the Dieci less harsh, without losing the full sports appeal previous models possessed. Bars slightly higher along with a wider seat, lifted to give the rider a bit more space to work with compared with previous Bimota’s; road testers in period praised the less aggressive position and reveled in the road holding courtesy of Marzocchi. Their upside down forks and rear shock combination offered riders a firm ride without unseating their dentures. Weighing in at 407lbs (65lbs down on the stock Yamaha FZR) with 145BHP on tap, great brakes were a must.  A pair of 320mm front discs plus a single rear 230, combined with Brembo calipers achieved this requirement. So, everything said about the Dieci ‘in period’ concurred with my fantasy but will it still inspire a quarter of a century later?

Whilst this Dieci is 25 years old it doesn’t appear dated, the bodywork is less rounded than current trends but the ‘stealth’ look still works well, especially with its silver over red combination. With such limited production most enthusiasts will have never viewed the Dieci naked and whilst I wasn’t happy to perform a full strip, this Bimota goes ‘topless’ with ease. Tank cover, seat and rear section are one item, just two bolts and half a dozen fasteners releases one expensive piece of bodywork. The detailing of the frame is accentuated by the variety of shapes and lines featured within the panels, fresh dimensions seem to appear as its viewed from different angles. The paint ‘pops’ as the Dieci is clothed in sunlight, starter button pressed we ‘take five’ allowing the Yamaha motor to gather some heat; I can’t believe it, I am going to have a Bimota moment.

At six foot three and 15 stone I am no ‘tinkerbelle’ and settling aboard I am prepared for the aching hip to arrive but it doesn’t! The bikes ready to make progress although my fears of stalling ensure there is no quick pull away to impress onlookers, I need not have worried the Dieci doesn’t bite; she’s a dream. Is it comparable with another machine from my past? No, being of a certain vintage, that began with an SS50 Honda,  polluted the ozone with a selection of two strokes, then scared myself senseless with the ‘R’ brigade, I have tried a few. The commonly used phrase ‘as happy going to Tesco’s as it is on the racetrack’ is rather apt for the Dieci. Although the supermarket car park is probably best avoided, its striking appearance will always draw a crowd and questions that follow ensure that your rucksack stowed four-pack won’t be very chilled on your return to base.

This bike feels minus any bulk, light to manoeuver at low speeds and easy to guide on the move with ample power under 5000rpm. After that everything begins to happen a bit fast for me and the road that seemed straight earlier becomes a series of bends; the brakes maybe from a different era but work superbly, minus any electronic additions. The Bimota brand was and is unique, offering superior performance with very individual appearance plus a bespoke price tag. For me, the rev counter rarely topped 6k, the edges of the tires remain untouched and Sussex Police Camera’s won’t be sending any letters, even so, my ‘things to do before I die’ list now has one less fantasy to fulfill. After one score and five years, with just a couple of hours together it all adds up and I finally get it! Although I still can’t afford it.

This particularly Bimota Dieci was first registered in Italy on 18.5.92 and was the private bike of the owner of Ducati Pistoia who kept it up until 2009, when it was sold to a German collector – Hr Hartwig Meinem. Due to a back injury Hr Meinem was forced to downsize his motorcycle collection. In 2014 the Bimota was sold to an English collector who imported it to the UK and it is currently for sale with West Sussex Specialist Cars near Goodwood.

Written and provided by Grant Ford.