By Philip Richter on July 5, 2016 in Collections, History, Motorcycles, Restorations 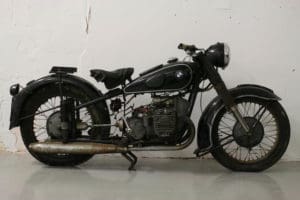 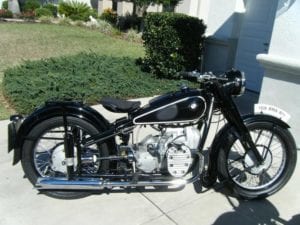 In July 2014 I acquired a fantastic 1938 BMW R71. This was yet an other AFN find and Robert Freeman was able to pull together the entire history on this two-owner machine. I bought it from noted vintage BMW collector and restorer Paul Meredith of Ocala Florida. Paul purchased the bike at Bonham’s in 2011 and performed a thorough cosmetic and mechanical restoration. The actual auction listing is still available here and there are several great photographs of the bike in its original and pre-restored state.

This basic frame/fork layout, naturally improved over the years, continued in a recognisable form up until 1954, when it was replaced by the ‘iconic’ Earles Fork design. That reigned until 1969, when BMW went to a more traditional design, as seen in today’s machines.

The engine was a low revolution, high torque design, intended really for use with sidecars. Most manufacturers, certainly in Great Britain offered side car specific motorcycles. V twins from BSA and Matchless, parallel twins from Triumph, the Speed Twin, and Square Four engines from Ariel. The side car was the family man’s transport means. Cars were few, and for the working man, it offered an easy way to take the family out. Certainly in Britain they continued in popularity up until the early 1960’s. No special license was needed to ‘drive one’. Hitch it to the motorcycle and away! On a personal note, I owned a BMW / Watsionian sidecar outfit for 7 years; it was great fun to drive, not ‘ride’.

In its production run between 1938 and 1941 a little over 2700 models of the R71 were produced. Of these we are sure that 10 came to AFN Ltd. All the Frames start with 506 and all engines with 700. When this machine came up for auction in England in 2011 it had the original engine and frame.

Of the ten that came to England, the AFN Ltd records show one has seized with 2 miles on the clock, and another reported gear box failure. It turned out to be the splines had been stripped on the clutch plate. Was this the manufacturers fault, or the owner ‘heavy handed’? I feel a combination of both. A number of the BMW’s twins  that came to Great Britain in the period 1935 -39 had similar problems. At that time, most British bikes had multi plate clutches. These can be slowly let it to engage smoothly. By contrast, the BMW car type single plate clutch is to the inexperienced, either in or out. Drop the clutch fast, and bang.

It might be appropriate now to give little history on the Company. The initials, AFN stood for Archibald Frazer Nash. He founded the Frazer Nash Cars. They were unique in have a chain drive to the rear wheels. Successful in motor sport, in the 1930’s Frazer Nash approached BMW for license to use their new 6 cylinder sports engine, and build Frazer Nash BMW cars. The factory started to supply r/h drive body’s, and engines, assembled on Isleworth, but, part of the deal was also to promote and sell BMW Motorcycles. This came into being in 1935. The earliest record is an R17 sold in October 1935. By September 1939, when all imports and sales ceased, some 217 machines had been imported and sold, from the humble R20 to the R71. However, this cannot be said to be 100% accurate, as in the last few years 2 BMW’s including this one, have come to my attention. I was invited to an Open Day for Frazer Nash Cars, and given access to search, and record with photos the whole archive. Frazer Nash has now appointed me Registrar for BMW’s sold by AFN UK Ltd, Both pre and post war, to 1960.

This location is only 27 miles from the AFN business, Falcon Works, London Rd. Isleworth. Mr Grahams decision may have been influenced by a full page advertisement in The Motor Cycle, 23rd June 1938 by AFN Ltd, listing 14 distributors of BMW’s across England, London to Liverpool (See below). Some of these Companies were still in business in the 1970’s. Featured in the advertisement was the R71 at the cost of £123. The caption ran, “See and try a Spring Frame at our Official Distributors “. It seems Mr Graham did, and why was it registered upon a Saturday? In all probability Mr Graham worked all the week and Saturday was his day off. The weather had been unusually mild and warm for the first three weeks of November, so perhaps he had a ‘dry’ ride home upon collection.

Hextable is a nice suburb in Kent, and 9 College Rd is a late 1920’, early 30’s semidetached bow fronted property. I have no knowledge as the Mr Grahams occupation, and there are not any entries in the AFN Archive relating to the machine, after the initial sale. What I have been able to establish, Mr Graham did not keep the R71 very long, it seems about a year or maybe eighteen months. That puts in in November 1939 – May 1940 and Britain is at War. Perhaps he enlisted, was called up, ‘drafted’ in the USA, or just felt it was not the thing to do, ride a German motorcycle at that time. I know, from my own Family, how things were. My father had a new BMW R5, which he rode throughout the War. He told tales of being stopped by the Home Guard at checkpoints, on suspicion of being a third columnist. Petrol was also rationed, so journeys had to be planned according to priority.

The R71 now fades into obscurity until April 1957. The BMW Club or The BMW Society of Great Britain as it was called when founded in the summer of 1951 with Newsletter No.1 printed in the September. It was headed Non-Political. 9 names were recorded, but the next month another 24 were added, plus one in France. Many of the founder members were riding the pre-war BMW’s, as the new models were just coming onto the market. A November 1951 advertisement in The Motor Cycle for the forthcoming show at Earls Court, London, lists stand No.22 with New Models for Immediate Delivery. A 250 ccs single, the R25, 500 ccs and 600 ccs twins, all have shaft drive and spring frames. The R51/3 is featured.  Of the total membership in the very first months, about 10 possessed post-war bikes, R25, R51/2, R51/3 and R67.

What is fortunate, the founding of a specific club for BMW’s in Britain, brought together those with the older bikes, which over the years saw these pre-war ‘gems’ passed around amongst likeminded individuals. This ‘saved’ JML 649, because an entry is recorded in April 1957 as follows:

It was Mr Gilles who eventually sold the machine at auction in September 2011. His name regularly came up in the Journals over the years, attending functions, assisting at club event and so on. However what has really pin points my research was a paragraph in the October 1968 Club Journal.

“ Nice to see Les Gilles again at the A.G.M. Les, one of the original members of the Club and now living only a stone’s throw from Stan Dukes, turned up on his well-kept R71 outfit which he has been driving for 28 years. The old 750 side-valver looked a picture and it certainly goes to show how well a BMW will last”

So, given a little journalist license 28 years’ points to 1940. That ties up very well with the previous ownership by Mr.E.G.E.Graham in Hextable. There are a couple of club members who recall Mr Gilles. One told me this rather amusing anecdote. It is not known what Mr. Gilles occupation was, but, and I quote; “He did seem to have an engineering back round, and as well as motorcycles a passion for Austin 7 cars. At one time he had seven of these lined up in the road, and parked outside his house. One would be OK, but that number attracted the attention of the local Police. It turned out, none of them had road tax or insurance, and that in turn resulted in a visit to the local magistrate. A hefty financial ‘slap’ on the wrist or in this case wallet resulted”.

Mr Gillies also owned an R50 in the early 1960’s. Perhaps more suited to everyday riding in London. After the 1968 entry above, there is little else I can find. It is only when the R71 turns up for Auction on 24th April 2011 at the Stafford Showground. Lot No. 252. The Stafford auction is twice a year and always brings large entries, for the humblest everyday motorcycle to very rare such as Brough Superiors that go for 6 figures.

But even in its change of ownership, the auctioneers, Bonham’s, well respected in the motorcycle world, made a classic mistake, that worked to the advantage of the purchaser. They listed a casting number on the cylinder 720130 as the Engine number, and as such this reflected the very low price it realised. No R71, or come to that, any pre-war BMW engine started with 720. Those ‘in the know’ obviously did not ‘let on’. The R71 engines start with 700 up to 702200, then the later models 703 – 703511.It was not until much later the new owner, found, to his advantage, the mistake.

In conclusion, what is apparent it the relationship that developed over many years between the owners of the pre-war machines, hanging on to them for decades. No just Mr Gillies. Many people, not just BMW Club members, for instance, Mr. Stanley Garland who owned the R51, HPD 329, from the early 1950’s till February 2016, must have formed an ‘bond’ with the bike. The reason why is easy to see, the class, style, and functional simplicity offered by these 1930’s BMW’s. Will today’s owners of the latest R1200GS etc. still be at one with it in 2046? I think not, it is all about the latest bike with whatever the designers can persuade people to buy. I personally kept my last new BMW from 1963 to 2012. Why? 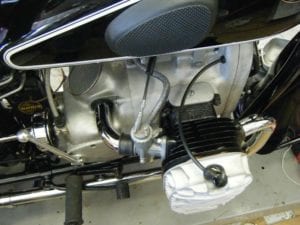 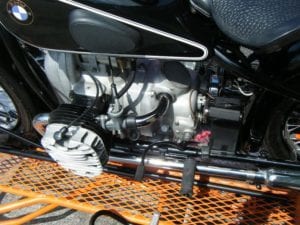 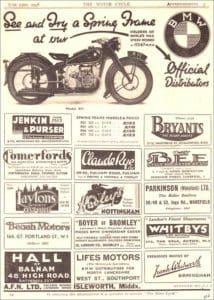