“Requiring 350 feet to stop from 80 mph, the Volaré was one of the worst stopping vehicles we have tested in years. The poor control under braking matched the distances, with the back end swinging around rather quickly.”

“Do you know the difference between an optimist and a pessimist? A pessimist says ‘Oh dear, things can’t possibly get any worse.’ And an optimist says, ‘Don’t be so sad. Things can always get worse.”

― Steven Galloway, The Cellist of Sarajevo

We hope you and your family are safe. The pain, uncertainty, and suffering in the world right now is as high as its ever been in the post-war era. First and foremost, we hope that you and your family are safe and healthy. Additionally, we are incredibly grateful for the many heroic efforts on the part of front-line workers. We want to thank all of the brave and selfless people who are fighting on the front lines of COVID-19—the medical workers, doctors, researchers, and grocers who are in the trenches helping us all go forward with our daily lives the best we can.

Despite all the negative news, we must remain optimistic that treatments will evolve soon and that a vaccine will be available in early 2021. The world is resilient, and hopefully, we will all somehow come out of this stronger. Until then, we are all living very different lives than anything we have ever known. For many of us, the workload and stress have been heavier and more complex than ever. Working from home offices and homeschooling children is proving to be quite a challenge for many families. However, one thing does remain the same—weekends are a sacred time to rest, to be with family, and find enjoyment. Here at Turtle Garage, much of the weekend is taken up with writing and uploading informative, worthwhile, and fun content for thousands of our readers. Blogging has turned out to be a great way to spend “shelter in place” weekends.

We hope you enjoy this particular Turtle Garage post.

We recently hopped into the Turtle Garage Time Machine and drove back to 1976—the year of the birth of the Plymouth Volaré—an obscure car that has (so far) been spared attacks by the 1970s “crap car” vigilantes. To set the table, we first reviewed some of the more important events of that fateful and surprisingly productive year. Then we did a virtual test drive of the then all-new Plymouth Volaré. At age seven, I was lucky enough to have several first-hand experiences with this pathetic and homely car. To this day, I remember the smell, the feel, and even the laboring sound of its feeble V8 engine. Even at the tender age of seven, I somehow knew that this car was a severe disappointment. We also dug deep into the Turtle Garage archives and pulled the May 1976 issue of Road & Track, which featured a detailed road test of the all-new Volaré. What follows is a summary of events in 1976, some first-hand impressions of the 1976 Plymouth Volaré by the author, and an actual Road & Track road test (which is well worth a read given the authentic flavor it reveals of the era).

1976: Some key events during the year of the launch of Plymouth Volaré

In 1976 Jimmy Carter won the U.S. Presidential election. The Concorde made its first commercial flight. The Viking 1 landed on Mars. NASA unveiled the first Space Shuttle. The Bionic Woman and Laverne & Shirley debuted on ABC. Sylvester Stallone’s Rocky was released. Agatha Christie, Jean Paul Getty, Mao Tse-tung, Howard Hughes, and Max Ernst died. Genentech was founded with backing from Kleiner Perkins. Apple Computer was founded. The first commercially developed supercomputer was released by Cray Research. The CN Tower in Toronto was completed. John Lennon was granted a green card for permanent residence in the United States. Liz Taylor got divorced for the 6th time. The New Jersey Meadowlands complex opened to the public. The B-52’s were formed in Athens Georgia, U2 was founded in Ireland, and The Eagles recorded “Hotel California.” Bruce Jenner won a gold medal at the Summer Olympics in Montreal. Ironically, in July 1976, Legionnaire’s disease infected over 180 people in Philadelphia—the symptoms (which sound all too familiar today) were high fever, dry cough, lung congestion and subsequent pneumonia. In 1976, the average cost of a house was $43,400 and a gallon of gasoline cost $.59. The Dow Jones Industrial Average closed at 1004 on December 31st 1976.

In many ways, the 1970’s was a tragic decade—particularly in fashion but maybe more so in the U.S. auto industry. This historic decade brought us some of the worst domestic cars of all time. The genesis of these low budget and low-quality economy cars was Detroit’s inability to deal with stiff pollution and safety legislation flowing out of Washington, D.C. during the early 1970s. In 1975, Congress approved the CAFE rules whose purpose was to reduce energy consumption by increasing the fuel economy of cars and light trucks. The following is a partial list of just a handful of the spectacular failures that came out of Detroit during this dismal era: 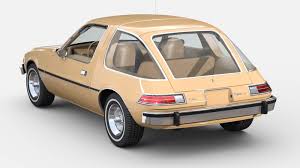 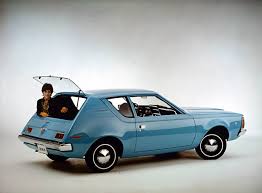 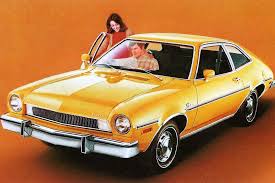 The Ford Pinto, image by DailyJstor.com 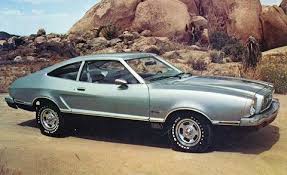 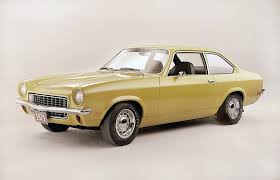 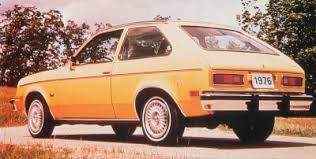 These cars we all tragedies, and the Internet is littered with both horrific and hilarious stories about them. These were not the cars of 1970s teenage dreams. As John Stewart said about the AMC Gremlin, the first car he owned, “This was used for many years in New Jersey as contraception.” However, the Volaré is a car that quietly stands out among its peers and has not yet been the subject of thousands of pages of analysis, critique, and commentary. The Volaré was very different from its brethren of the era—it was a four-door wagon complete with faux wood on the sides. It had thin vinyl seats. It had fake Porsche-like Fuchs wheels. It had V8 power. It had an exotic name (Volaré with an accent on the e) and Plymouth made it.

I have rich and vivid memories of this hideous car. Our family friends (the Theurkaufs) owned a brand-new cream white ’76 Plymouth Volaré wagon. The car was the epitome of everything gone wrong in Detroit during the 1970’s. Otto and Tina Theurkauf’s car was a “Premier” edition which was fully optioned with the fake-wood siding, sticky vinyl and sandpaper-like cloth upholstery, and the bigger V8 motor that Road & Track described as “emaciated.” Not only was the Theurkauf’s Volaré slow and ugly, it was also a gas hog: 12 MPG, zero to sixty in 14.6 seconds. And things only got worse if you tried the brakes. From 80 mph, it took 350 feet to stop, its back end swinging. Road & Track called the Volaré “one of the worst-stopping vehicles we have tested in years.”

The Volaré was the antithesis of the aggressive safety and efficiency regulations that the government and the industry were trying to achieve. I remember the winter of 1977 (I was seven years old) when the Theurkauf family came up to our farm in Woodstock Vermont for a ski trip. Maybe it wasn’t just driver error the day Otto Theurkauf (with four passengers, including me, age seven) lost control of the ship and spun it into a snowbank, rear-end first. We all pushed and pushed, and finally, the Volaré emerged from the snowbank without a scratch. I also have memories of going to hot summer horse shows while trapped in the back where the lukewarm air conditioning could not reach me. Finally, I remember being on Block Island with fishing rods strapped to the flimsy roof rack—we could not discern if the rattling above us was the rods chattering in the wind or simply normal noises emanating form the Volaré itself. A testament to its build quality, I only recall the Volaré being in the Theurkauf’s garage for a short while—less than three years at best.

So go ahead, pour yourself a nice glass of wine and recline and travel back in time. The following is a reprint of the Road & Track Volaré review from May 1976. Be sure to get some rest before reading as the headline alone is sure to put you to sleep, “Not an exciting car, perhaps, but a reasonable one.” The tone of the article reads as if the author had given up on life. It reveals some interesting facts about the Volaré. It was wind tunnel tested. Non-a/c equipped versions had no dashboard air vents. Short sun visors were ineffective and less optioned cars had no internal hood release. Like a Model T Ford, the rear suspension was a solid axle mounted on a pair of leaf springs. The story cites “other reasons for our optimism” but its not entirely clear if those reasons ever really existed. Sure, things can get worse, but hopefully things will not get so bad that Detroit brings us another car like the Volaré. 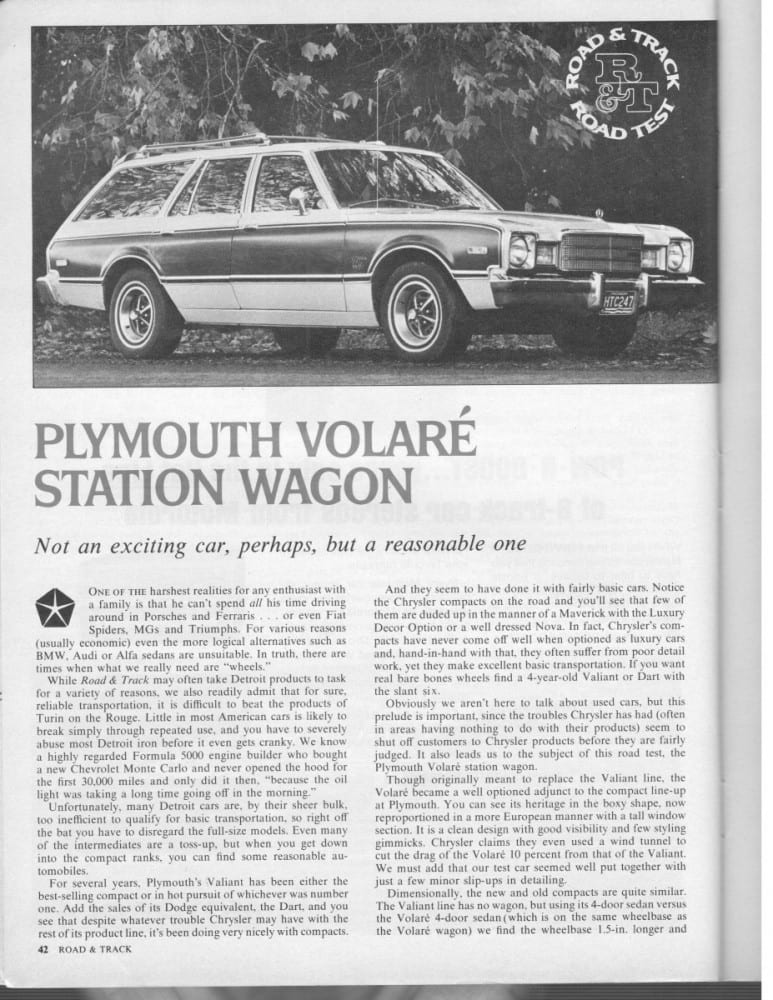 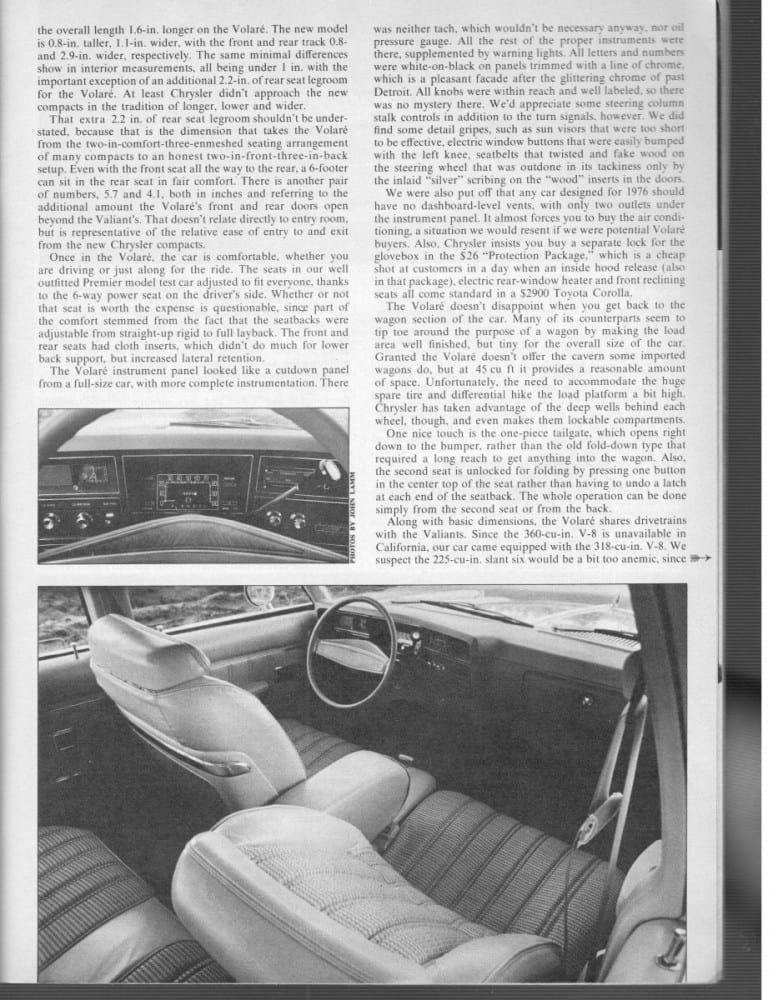 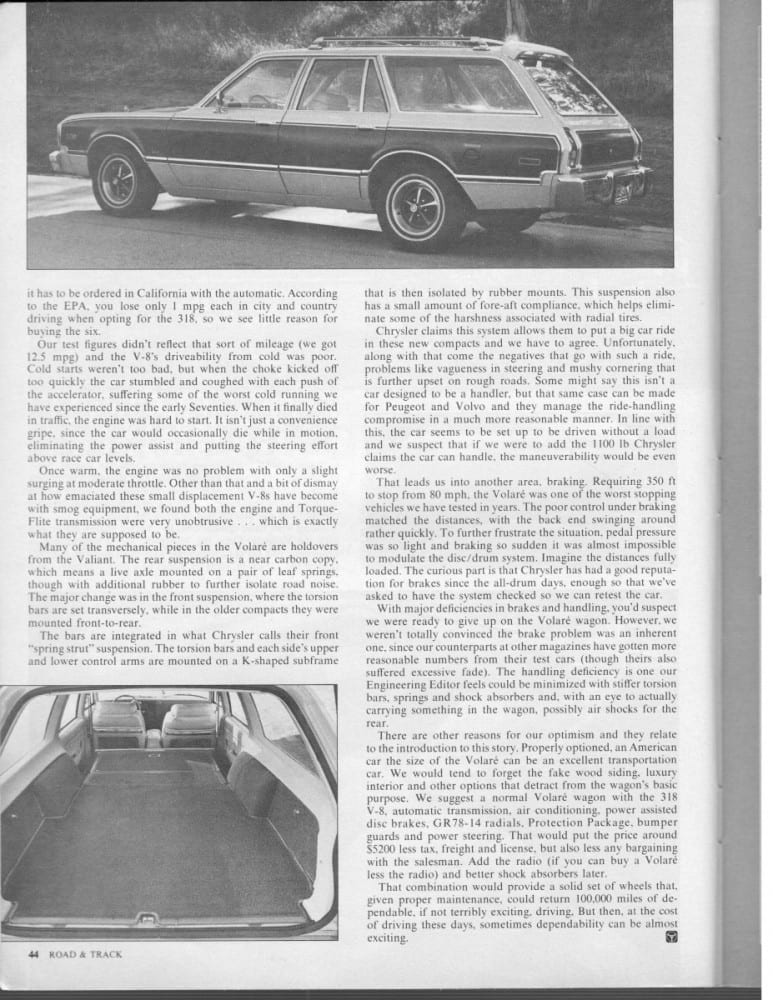 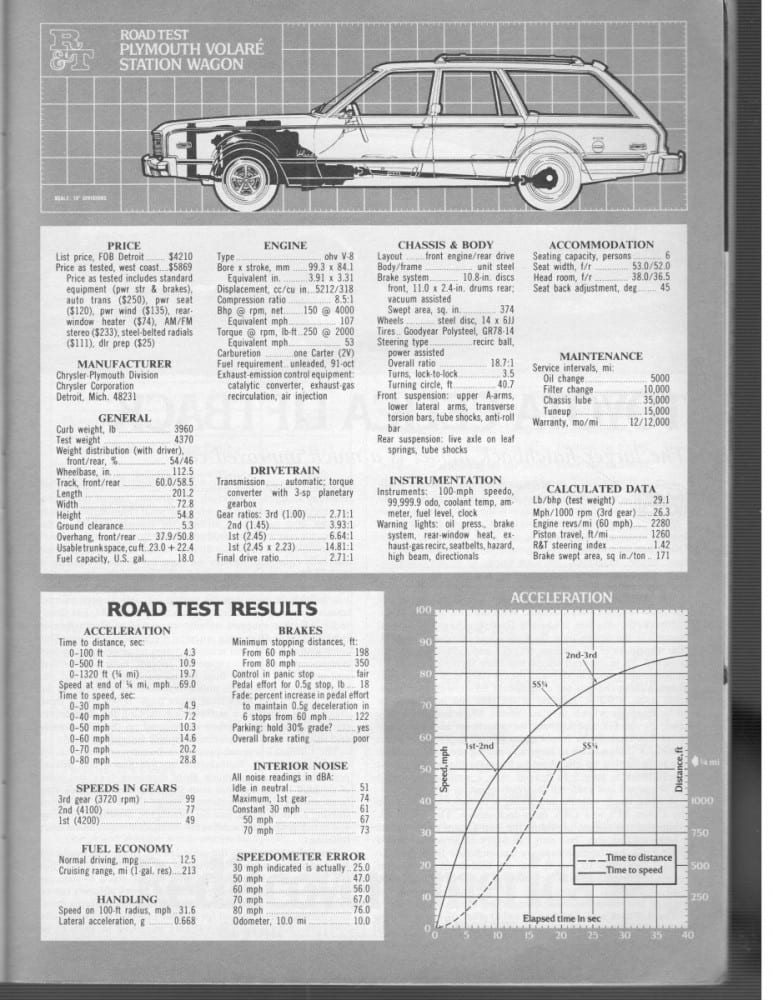 18 Responses to Things Could Always Be Worse: The 1976 Plymouth Volaré Wagon