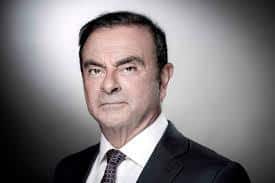 This summer the auto industry was shocked to learn of the sudden and premature death of legendary and charismatic Fiat CEO Sergio Marchionne. This week, the auto world is being rocked once again by more high profile upheaval. Newswires are abuzz over the arrest in Japan of auto titan Carlos Ghosn. The Nissan/Renault/Mitsubishi Chairman is facing allegations of serious fraud. As of this writing, the facts have not been substantiated and the details remain unclear. A major investigation by Nissan claims that Ghosh committed “serious acts of misconduct.”  CNN has reported that “More details are expected to emerge in the coming days and weeks about Ghosn’s alleged wrongdoing. Nissan said it includes significantly under-reporting his compensation and misusing company assets. Ghosn is yet to respond to the allegations.”

Below are two recent articles from Bloomberg on the emerging Carlos Ghosh situation:

By Geared Reidy and Ania Nussbau

Renault’s board convened for a crisis meeting in Paris to discuss the future of the automaker’s alliance with Nissan Motor Co. after Chairman Carlos Ghosn’s arrest in Japan for alleged financial improprieties drove a potential wedge into the relationship.

Board members are expected to appoint interim leadership at the French automaker, which Ghosn had been pushing to merge with Nissan to solidify their two-decade-old alliance, as Bloomberg reported in March. Earlier, Nissan informed Renault that it was investigating potential financial wrongdoing at the Dutch-domiciled Renault-Nissan venture, people familiar with the matter said.

Back in Japan, where Ghosn has remained in custody since his arrest Monday, more details of his alleged transgressions began trickling out in local media. Combined, they painted a picture of an executive who dipped into company funds to bankroll a lavish lifestyle, from luxury residences dotted around the globe to money funneled into investment funds and family vacations. Ghosn hasn’t been seen in public and hasn’t responded to the allegations.

The revelations, which followed a months-long internal probe, put key stakeholders in a bind because there’s no obvious successor. While all sides rushed to assure that the alliance was solid, Ghosn was the linchpin holding the partnership together, even as the leadership at Nissan publicly balked at the idea of an outright merger. The French government, which owns 15 percent of Renault, signaled it will protect the automaker, which has benefited hugely from its participation in the French-Japanese pact.

Finance Minister Bruno Le Maire said he will meet with management of Renault and state representatives on the board of the company to put in place interim governance. While the French government isn’t demanding Ghosn’s formal dismissal, he is no longer in a position to run the automaker, Le Maire told French radio.

President Emmanuel Macron has already said he would remain “extremely vigilant” regarding the stability of the Renault-Nissan alliance. One immediate step will be to fill the post of Renault CEO, which might fall to Chief Operating Officer Thierry Bollore, whom Ghosn himself had previously called a “good candidate” to eventually replace him at the French carmaker.
Bollore will be proposed at the meeting tonight as Renault’s interim leader, together with Philippe Lagayette, an independent board member, as non-executive chairman, according to people familiar with the plan, who asked not be identified ahead of the meeting.

Le Maire said the government will seek evidence from Japanese authorities, after the French side was all but blindsided by the probe and subsequent arrest Monday. The board of Renault and the Macron government were both caught unaware by the allegations, according to people familiar with the matter. A Renault spokeswoman declined to comment on the minister’s plans.

The alleged wrongdoing may have have been more widespread. According to Nikkei, Ghosn may have received unreported funds from the Dutch Renault-Nissan venture amounting to about 100 million yen ($880,000).

In a memo to employees sent on Monday, Bollore expressed “full support for our chairman and CEO,” calling the alliance an “industrial gem that must be protected and nurtured.” Renault confirmed the content of the letter, which was cited in full by the Financial Times.

While there’s little doubt that Ghosn’s ride atop the global car industry has come to a rapid halt, there’s less clarity on the nature of his transgressions. Japanese broadcaster NHK said Tuesday that Nissan paid “huge sums” toward Ghosn’s residences sprinkled across the globe. The real estate in Rio de Janeiro, Beirut, Paris and Amsterdam, had “no legitimate business reason” and Ghosn wasn’t paying at least some of the rent, the report said.

At a late-night press conference in Tokyo Monday, Nissan Chief Executive Officer Hiroto Saikawa declined to give details on the charges, only saying that had both understated his income and misused company funds, including expenses and investment funds.

All told, Ghosn failed to declare some 5 billion yen in his income on Nissan’s official securities reports submitted over five years starting from 2011, prosecutors in Tokyo said Monday. According to Japanese law, Ghosn can be held in custody for up to 23 days without being charged.

The sudden downfall of the larger-than-life executive has spooked investors. Nissan dropped as much as 6.5 percent in Tokyo Tuesday, while Renault continued its slide, falling as much as 4.8 percent in Paris. On Monday, the French stock fell to the lowest since January 2015.

Nissan’s credit rating is also at risk as a result. Standard & Poor’s put its long-term A rating on watch for a possible downgrade, saying profitability might weaken substantially in coming years if the alleged misconduct damages the brand image enough to seriously depress unit sales or hurt the alliance. Moody’s Investor Service separately called the probe “credit negative” for Nissan, though Renault’s outlook is unaffected, it said.

Over the course of almost two decades, Nissan has grown into the larger of the two main partners by deliveries and sales — but it has less say. Renault owns just over 43 percent of Nissan, compared with the Japanese company’s 15 percent stake in the French partner. It also boasts full voting rights in the alliance, while Nissan has none. That lopsided structure was always a point of contention between the French and the Japanese side, and Ghosn was in no small part responsible for preserving the peace between both sides.

“The issue is who’s going to control the alliance, and Saikawa has clearly put his cards on the table,” said Kenneth Courtis, chairman of Starfort Investment Holdings, an investment, private equity and commodity group.

Nissan Board Divided Over Plan to Dismiss Carlos Ghosn

With less than 24 hours to go before Nissan Motor Co.’s vote on whether to dismiss Carlos Ghosn as chairman, board members are divided, saying they have been given too little detail on his alleged financial crimes, according to people familiar with the matter.

The nine-member board is due to vote Thursday afternoon Japan time on the motion to dismiss Ghosn, who was arrested on Monday after stepping off a jet at a Tokyo airport. Renault SA, Nissan’s biggest shareholder and partner in the world’s biggest auto alliance, has said it’s awaiting more details of the allegations and has installed an interim chief executive officer in place of Ghosn.

The debate at the top of Nissan adds another layer of complexity to a saga that’s rippling through the powerful alliance. Japanese authorities shocked the world when they arrested Ghosn on Monday, catching Renault and the French government flat footed, and fueling speculation about whether Ghosn was ousted in a palace coup.

Nissan CEO Hiroto Saikawa said Monday that a months-long probe found Ghosn had under-reported income and misused Nissan company funds. In a heated press conference, Saikawa said the actions meant Nissan would move to dismiss Ghosn, the brains behind the carmaker’s alliance with Renault and Mitsubishi Motors Corp. A Nissan director, American Greg Kelly, has also been accused of wrongdoing in relation to Ghosn’s pay.

But one of Nissan’s directors told Bloomberg News that not enough information had been provided about the investigation for them to be able to decide how to vote on Thursday. Securing a unanimous decision to oust Ghosn as chair will likely be difficult because Nissan directors that used to work at Renault may not back the dismissal until the allegations against Ghosn are made clear, according to people familiar with board members’ deliberations.

The director and other people Bloomberg News spoke to asked not to be named, citing company policy. The board’s decision Thursday will do little to clear the allegations against Ghosn and Kelly that are still being pursued by the Tokyo prosecutor’s office. The men will be detained for a further 10 days, Japanese broadcaster NHK said on Wednesday.

A Nissan spokesman didn’t comment specifically on the board deliberations. “The directors are meeting tomorrow and a proposal will be made to the board to remove the directorships of Mr Ghosn and Mr Kelly,” the spokesman said.

Nissan’s board currently includes Ghosn, Saikawa and Kelly as three representative members. It also has two external board members. The directors present in the meeting will vote anonymously on a one-person-one-vote basis, and the outcome will be determined by a simple majority, according to two people briefed on the matter. That means there needs to be at least four votes in favor for the motion to be carried. The board won’t name any new members to replace Ghosn and Kelly, according to the people.

While Nissan under Saikawa has taken a hard line on Ghosn’s arrest, Renault’s board stopped short of firing him as CEO at an emergency meeting in Paris Tuesday night. They’ve asked Nissan to hand over details of Ghosn’s alleged misdeeds.

Ghosn and Kelly were taken away by prosecutors when they arrived in Tokyo Monday on a corporate jet, according to the Asahi Shimbun newspaper.The exact whereabouts of Ghosn and Kelly aren’t known and they or their representatives couldn’t be reached for comment.

Philip Richter is President and co-founder of New-York-City-based Hollow Brook Wealth Management, LLC. The Turtle Garage Blog, he says, is dedicated to his "love of excessive personal transportation."
View all posts by Philip Richter →
2003 Audi RS6: Well Bought
The White House vs. GM: The Theater of the Absurd

3 Responses to The Mysterious Fall of Carlos Ghosn