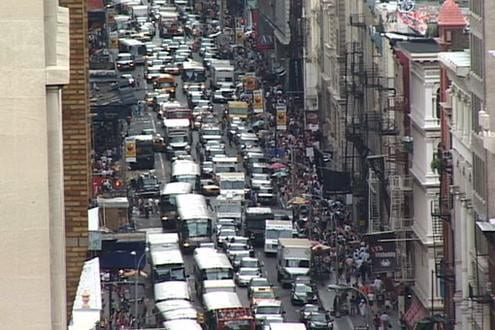 “New Yorkers have for too long been mired in traffic congestion and subway breakdowns. Now, thanks to the leadership of Governor Cuomo and the State Legislature, riders and drivers will both see relief: congestion pricing will raise billions of dollars for Fast Forward, the MTA’s comprehensive plan to fix our subways and buses, and will reduce gridlock on our roads, At long last, we’ll start to get our city moving again and make both crippling traffic congestion and constant subway breakdowns a thing of the past.” —Nick Sifuentes, executive director of Tri-State Transportation Campaign (Featured image by The Village Voice)

“I believe the time has finally arrived to explore congestion relief pricing in major cities. Here in Los Angeles, our congestion challenges are just as bad, if not worse, than Manhattan’s.” —Phil Washington, chief executive of the Los Angeles County Metropolitan Transportation Authority.

After over a decade in the Big Apple, my firm recently moved our offices out of New York City. There were many factors behind the decision but one material one was the tremendous increase in the volume of NYC traffic. Just crossing town is now an hour-long affair. Many employee commutes have become unbearable. NYC congestion has been exacerbated by an increase in population, growing commerce, and, of course, more drivers. However, ride-hailing applications such as Uber and Lyft have probably also contributed to the problem.

The new toll will be enforced for all vehicles that travel into the central business district (CBD) which is defined as the area below 60th Street. Several years ago London implemented a similar tax which has helped lower the congestion in that city by up to 15%. It is anticipated that this tax will raise up to $15 billion per year in revenues which will be used to improve public transportation. The toll amount is unknown but is expected to take effect by 2020. It is anticipated that cities like Boston, Los Angeles, and Seattle will eventually implement similar tolls.

Here are some of the specifics from the bill according to a recent article by Amy Pitt in the Curbed NY Website (read her and extensive full story here):

You can also read a detailed review of the new NYC toll in the New York Times—click here.

2 Responses to The Big Apple To Adopt Congestion Tolls