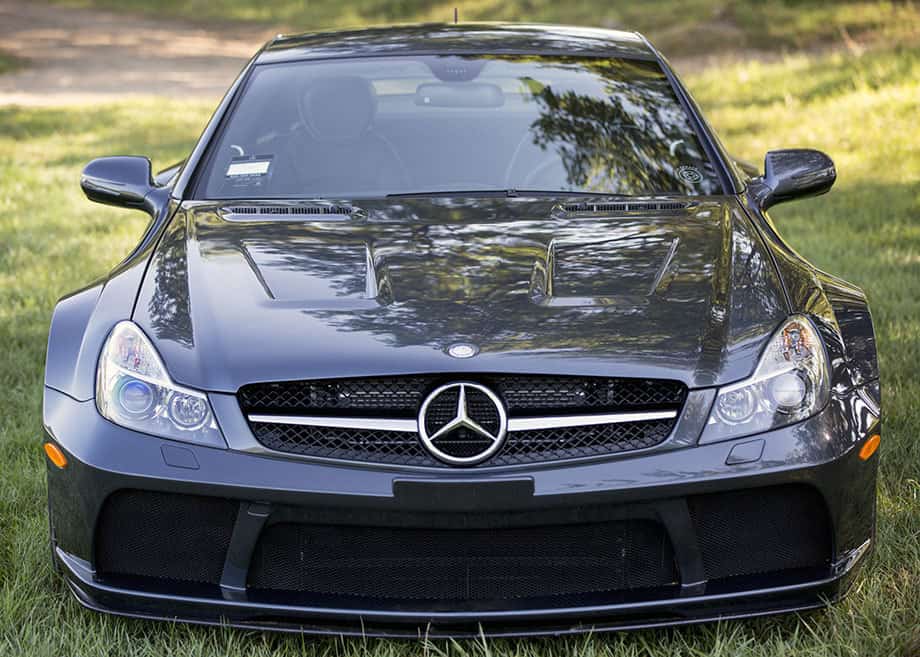 All photos courtesy of Ken Richardson

The 2009 SL 65 Black Series is one of the rarest and most powerful cars ever produced by Mercedes-Benz. The first saw time I saw the car in person was in October of 2009. It was in the showroom of the Mercedes-Benz Park Avenue store and had a big SOLD sign on the windshield. For me personally it was one of those “ah-ha” car moments. From that day forward I dreamed of that car. The 65 Black Series seemed like a modern day Mercedes-Benz version of the legendary Porsche 959. I waited for the car to reach maximum depreciation and then in 2015 I made my move and bought the best one I could find. I found a one owner car with 1600 original miles. You can read about the Turtle Garage example here. 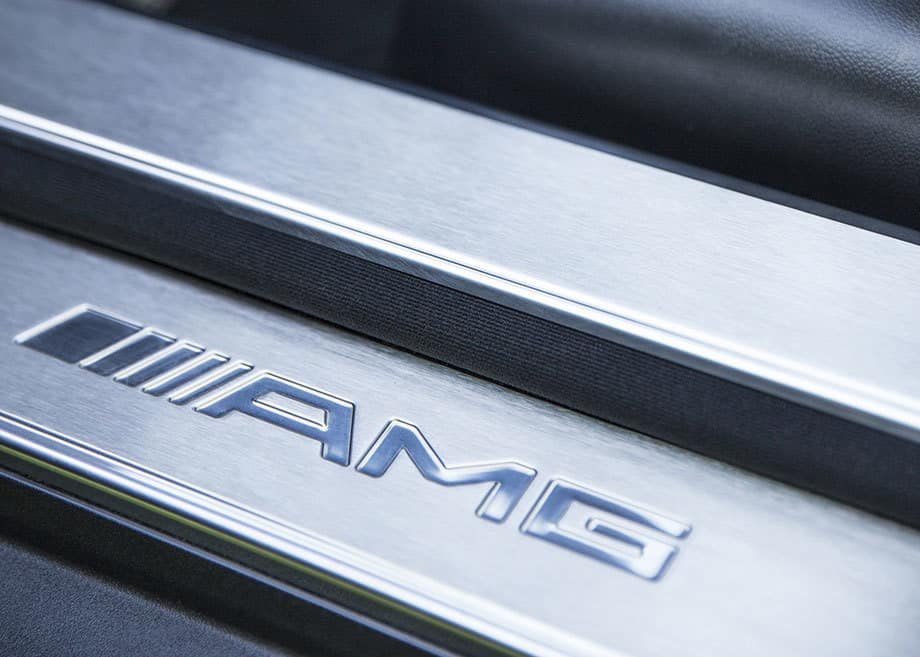 Only 350 SL 65 Black Series cars were produced. Each example was hand built by AMG in Affalterbach. Back in 2009 the car carried a list price of $304,000 and there were no options. By mid 2104 low-mile used examples had lost almost half their value and were trading in the $185,000 range. However, two recent high profile auction results have brought attention to this legendary supercar. On March 20th at the Bonhams’ Goodwood Members Meeting Auction in Chichester U.K. a right-hand drive SL 65 Black Series sold for $294,235. Last month at RM’s London auction another European spec Black Series sold for $314,000. These two sales put the rare and desirable SL 65 Black Series solidly in the black and back over list price. 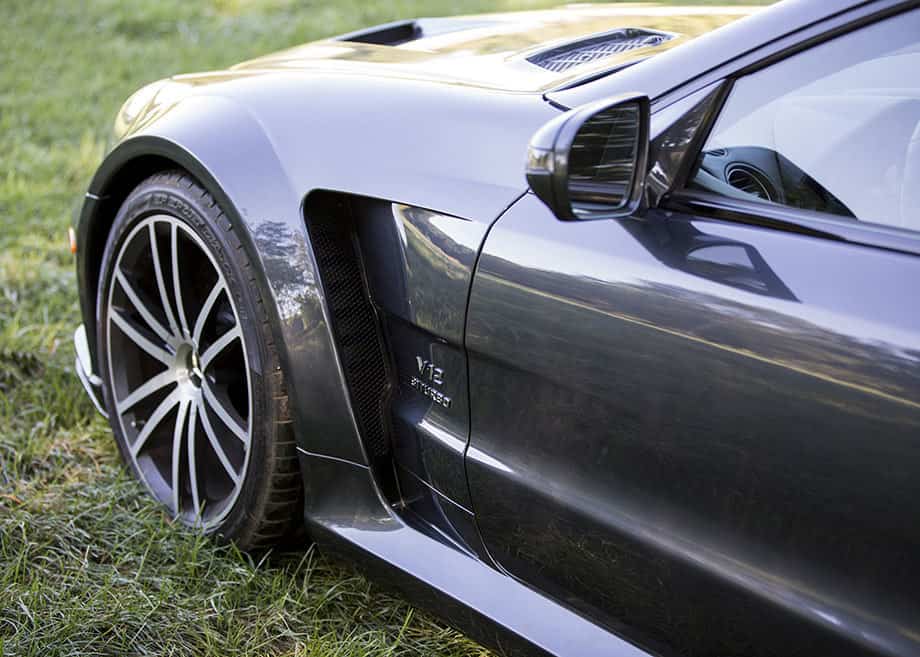 I expect these cars to continue to appreciate. Given their rarity and the unique AMG manufacturing process behind them, these cars should become highly collectible in the coming decade. The SL 65 Black Series has everything going for it and it checks all the boxes: it rare; its stylish; its exciting; its got a massive V12; and its beautiful.

Since its early days of collaborating with Mercedes-Benz, AMG’s products have developed a reputation for being exceptionally powerful and ideal for rocketing down the Autobahn at exceptionally high speeds. For the petrolhead executive looking for rapid transit in style, there could be no better option than an AMG-powered Mercedes-Benz. At the top of the AMG range was the SL 65 AMG. With a hand-built, twin-turbo V-12 engine and a cabin awash in leather and just about every automotive luxury one could imagine, it was the perfect balance of horsepower and comfort. However, AMG’s engineers had more tricks up their sleeves for those looking for even more power.

If the “standard” SL 65 AMG was Dr Jekyll, the Black Series edition would be Mr Hyde. Mercedes-Benz and AMG stripped the car of its usual luxury necessities and ratcheted up the intensity of the car as much as possible. The only parts it shared with the SL65 AMG were the doors and the side mirrors. The hardtop was replaced with a fixed roof, and a massive rear wing was fitted to the back of the car. All body panels were replaced with new carbon-fibre–reinforced plastic panels. These huge fenders made the Black Series an incredible 4.5 inches wider at the front and 4.1 inches wider at the rear, offering a much more menacing stance. In European specification, the SL 65 Black Series shed 340 pounds over the SL 65 AMG through the prolific use of carbon fibre, removing the side airbags and the standard electronic braking system, and fitting lightweight racing seats.

Lurking under the Black Series’ bonnet is a 6.0-litre twin-turbocharged V-12 that produces an incredible 661 brake horsepower and a massive 738 foot-pounds of torque, making it the most powerful Mercedes-Benz ever produced at the time, 57 brake horsepower over the standard SL 65 AMG, also thanks to slightly larger turbochargers. Mercedes-Benz estimated the car’s 0–62 mph time to be 3.8 seconds, and while the top speed is electronically limited to 199 mph, it could undoubtedly go much faster than that if unrestricted.

Offered from single ownership, this SL 65 AMG Black Series was delivered new to Italy, where it was purchased by its current owner, an avid collector of the finest Mercedes-Benz and AMG products. Finished in Paladium Silver with a Black Nappa interior in leather and Alcantara, it has remained in his collection ever since, accumulating just 2,360 kilometres from new. Following a recent service, it remains ready for the open road or for track-day outings.

With only 350 examples built worldwide, these cars are seldom seen and have already proven to be highly desirable to collectors not only for their rarity, but also for their phenomenal performance. Presented here as a virtually as-new example, this Black Series would be an exciting addition to the stable of even the most crazed horsepower junkies.

The SL 65 AMG  Black Series was featured on the cover of the August issue of Sports Car Market: 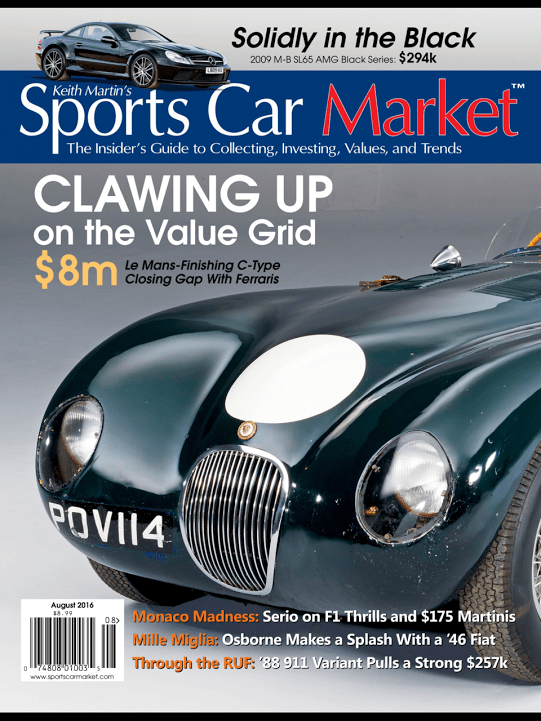 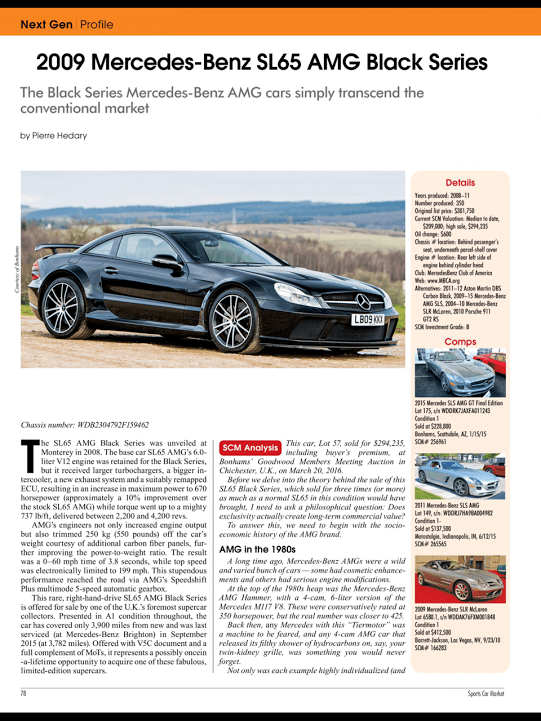 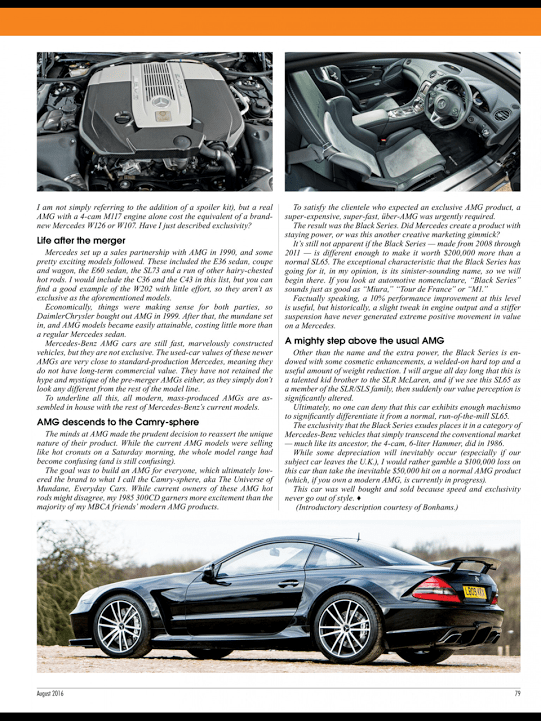