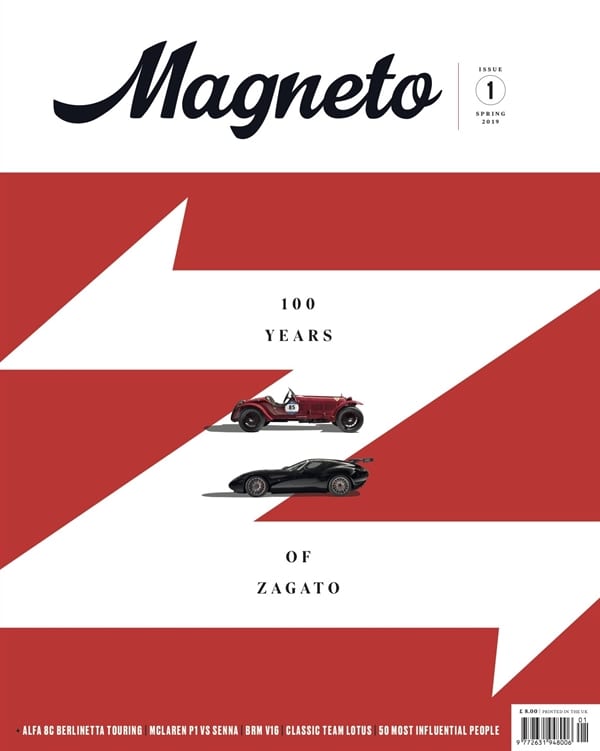 By Philip Richter on August 7, 2019 in Cars, Publications 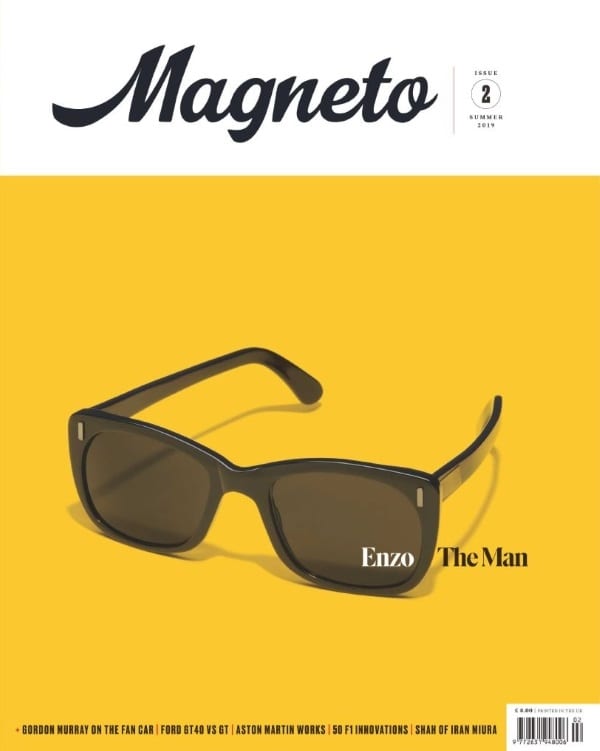 “And to those who have professed to enjoy Magneto but who have raised an eyebrow or drawn a sharp breath at the bravery/stupidity of launching into the “dying” print market, some reassurance—this is a business model that’s simple, not reliant on the vagaries of retail newsstand, and nor is it a vanity project. Forgive me if I share too much information, but it’s gone straight into profit and financial stability. Magneto is here to stay.”

Who says that magazines are dead? We only need to look at the ongoing success of publications like Sports Car Market to debunk this myth. Niche magazines still seem to have a place in the hearts and minds of readers. There is something about a well-produced high-quality paper magazine that cannot be recreated through a dull and distant digital experience.

This spring an unknown package landed on my doorstep. It came from Sandra Button, Chairman of the Pebble Beach Concours. It arrived via an express envelope—I had no idea of the mystery contents. Inside was a copy of Magneto Magazine—I had never heard of it nor had I subscribed. Through the Pebble Beach Concours database, Magento found me and generously gifted a free subscription—now I am hooked and obsessed. Magneto is a classic car lifestyle magazine that is beautify produced and masterfully written. For example, in the inaugural issue of Magneto, legendary auto historian Doug Nye wrote a fantastic must-read peice on Enzo Ferrari. Magneto is a perfect compliment to Sports Car Market—which is more focused on auction results, valuations, and overall market trends. Add to your monthly reading list The Economist and you’ll have a trio of publications that provide “all the news that’s fit to print.” Here is a tip for TG readers: Subscribe to Magneto ASAP. Be sure to purchase the first two issues as well—the content is timeless. You can learn more at www.magnetomagazine.com.

Magneto is produced by the very best, most knowledgeable writers and most creative photographers, printed beautifully on high-quality paper. It features the most important and interesting cars, events and people, serving up unmissable content at a quality never before seen in the collector car world. If only the best cars will do, then only Magneto will do as your magazine of choice. Magneto is not generally available on the newsstand. If you would like a copy, then you can order a single issue (whilst stocks are available) or order a subscription to ensure you never miss out.

The people behind Magneto:

Geoff was first introduced into the automotive world as a sponsored undergraduate for the Rover Group in the 1980s but escaped to join BBC Magazines and EMAP. In early 2000, he joined the Automotive division of EMAP as publishing director before launching Octane as MD in 2003. The subsequent success and sale of Octane to Dennis Publishing led Geoff to become a director at Dennis, where he was responsible for the digital transformation of Evo, as well as leading a number of acquisitions and the launch of the International Historic Motoring Awards and Vantage magazine. A move to The Motorsport Network saw Geoff as president of their European Automotive Division and MD of Autosport Media, and subsequently CEO of AutoClassics.com. Now he’s heading up Hothouse Media, the publishing company behind Magneto.

David started in motoring media in 1992, the perfect outlet for his knowledge and enthusiasm for collector cars old and new. After time on Practical Classics, Classic Cars, Bike and a period as a freelance writer and consultant, in 2003 he co-founded Octane magazine. David stayed with Octane to its height in summer 2017, by which time he had become editorial director, overseeing not just Octane but also new launches Vantage (Aston Martin) and Enzo (Ferrari). In 2017 he became launch editor of AutoClassics.com which, in a few short months, became a global marketplace for classic cars and a trusted authority for the latest news and features. Now David is concentrating his efforts on Magneto, realizing his ambition to produce the highest-quality magazine in the collector car market.

Rob and Sue have experience in magazines that began when they met at Haymarket Publishing in 1987. Haymarket’s automotive titles at the time included Autocar, Autosport, CAT, Classic & Sports Car, The British Motor Show Guide, The Scottish Motor Show Guide, MotorSport, Motoring News, Your Classic and What Car? Rob went on to run events, while Sue embarked on a marathon 11-year stint working with Geoff Love and David Lillywhite on Octane magazine. During this period, Rob and Sue also worked with Geoff and David to help launch Vantage magazine. With their vast knowledge of the magazine market, Rob and Sue bring a unique set of skills, spanning magazine launches, advertising, sponsorship and event management.

Sophie has developed advertising sales campaigns for premium publishing brands for over 20 years, working in various mediums including magazines, newspapers and digital. She helped to establish Octane’s groundbreaking Chrono watch supplement, as well as introducing luxury clients to Evo, Vantage and The Week. During her career she has established and built an exceptional portfolio and network of clients and business contacts, and has become one of the best known and best-loved advertising figures in the watch and luxury goods world.

Philip Richter is President and co-founder of New-York-City-based Hollow Brook Wealth Management, LLC. The Turtle Garage Blog, he says, is dedicated to his "love of excessive personal transportation."
View all posts by Philip Richter →
The Wheel, The Cart, The Carriage, The Car, The Driverless Automobile
Pebble Beach: The Ultimate Guide

4 Responses to Magneto: The New Quarterly Magazine for the World’s Greatest Cars