Sarah and I recently took a trip to southern California. We got to spend some long overdue time with my brother and his family in San Diego. It was especially fun for me to see his growing daughters and observe the Southern California “SoCal” car culture that is so vibrant and full of life. Barely off the plane we accidently stumbled upon a car show. Walking into Rancho Santa Fe for breakfast we came across an impromptu “cruise in” on Main Street. Many of the cars were daily drivers, but we also saw old woody wagons, old 911’s, and an vintage Lotus Elan. There were several new Mustang’s and one yellow Corvette. Sarah, Hans and I walked around and admired the eclectic casual get together. 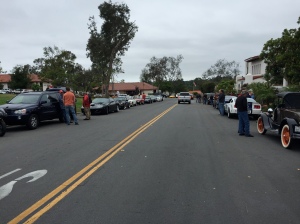 Hans and Sarah checking out a Lotus.

Getting a burrito at a local restaurant in downtown Leucadia we ran into Hans’s fellow co-worker Nick VanSant. Being in SoCal it came as no surprise that Nick was a car guy. He invited us to come visit his house around the corner. After lunch we took a stroll up the street and found Nick and his uncle leaning over the hood of a 1996 Corvette. They were changing the water pump and performing a routine service.

Nick’s uncle working on the 1996 Corvette.

NIck’s uncle was a real character and one hell of a mechanic. You could tell right away that this guy knew exactly what he was talking about. We chatted for awhile and it quickly became apparent that Nick’s uncle was a Corvette savant. Parked next to Nick’s Corvette was an old Volvo 760 Turbo wagon. From the outside it looked like any other old late 80’s Volvo. Our attention turned to the Volvo when Nick’s uncle popped open the hood. This was no ordinary Volvo wagon. Nick’s uncle equipped it with a LT-1 Corvette V8 complete with a six-speed gearbox! Only in SoCal could something like this exist! Nick’s uncle said, “The Corvette V8 fit perfectly in place of the Swedish four cylinder….I barely had to adjust the motor mounts!” This car certainly brings new meaning to the term “sleeper”! Seeing this Swedish-American invention provided one of those rare moments of total astonishment. For me personally, the Corvette powered Volvo generated far more car envy than any Ferrari. Porsche, or Lamborghini could ever hope to attain. 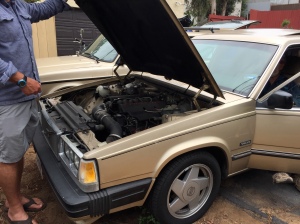 A deeper look under the hood reveals a 1996 Corvette LT1 motor.

I could not help but notice many other unique cars on our visit to SoCal. Many of the cars that have long left the roads of the east coast can be found in abundance parked along city streets or just cruising down the road. I saw everything from a 1970 Toyota to an old Porsche 914..

An old 914 6 parked on the streets of Leucadia.

We even saw a true SoCal classic; a VW camper bus complete with a nearby guitar player singing Nights in White Satin by the Moody Blues. 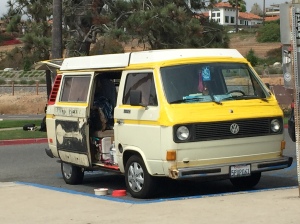 Banjo Benny’s VW bus parked outside the Swami Headquarters near the beach.

Hans took us to see his friend Gene who owns EZ Cars 101. Gene Ventura’s car dealer can sell you anything from a Pontiac to a Porsche. Gene’s son goes to school at the Pacific Ridge School where Hans teaches English and is the head of the middle school. We spent about fifteen minutes looking around the lot and my eye came upon a classic late 80’s Ford Mustang. This was not just any old Mustang. It was a triple-white hot rod Saleen version and it was once owned by Merv Griffin! Clearly the “rare” car had celebrity SoCal status. The phones at EZ Cars 101 were probably ringing off the hooks with inquiries! 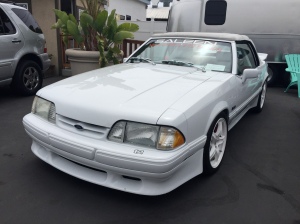 I could not help notice that there were two 911’s in a garage a few doors down from Hans’s house. Hans and I rode our bicycles over to say hi to his neighbor and inquire about his pair of Porsches. In what turned out to be the ultimate coincidence, it turns out this neighbor used to live in South Salem, New York (where my brother and his wife lived for three years). He has a mid 1970’s 911 race car and a 1988 911 Turbo. He was very knowledgable and performs most of his race car tuning himself.

Hans checking out the “fuel cell” in the 911 race car.

Back at our hotel in Rancho Santa Fe I could not help notice the brand new Mercedes S65 AMG coupe that was parked next to our feeble Toyota Corolla. Talk about a tale of two cities! Having these cars parked next to each other reminded me of a fit Thoroughbred racehorse standing next to a sick hamster.

A brand new Mercedes S65 Coupe parked next to our Corolla.

Some other notable cars that we saw in and around southern California: 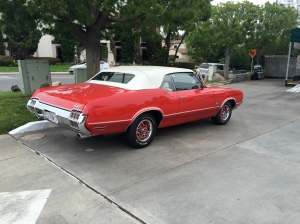 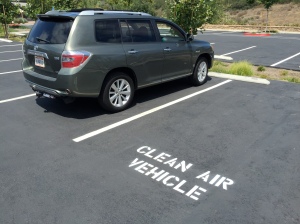 Walking the streets in town you can see and feel the subliminal car culture that permeates everything in SoCal:

Even the tree grids along the sidewalks in downtown Lucaidia are a reminder of the legendary 101.

Finally a word about our rental car. Its a 2014 Toyota Corolla with 25,000 miles on it. Hertz really stiffed us this time! The car has a certain bespoke aluminum Coke can feel. Its somehow a far cry from older Corolla’s that I recall driving in the past. The engine produces a cacophony of sounds yet produces no power. It is so underpowered you have to be careful pulling into traffic or changing lanes.The brakes are spongy and ineffective at best. The suspension is like a wet spounge. The doors close with a “tink” sound that reminds me of a flimsy kitchen cupboard door. The radio has barely enough power to pull in an AM station and the keys lack an automatic door lock feature. In short I was actually stunned by the low quality and poor fit and finish of the car. Isn’t Toyota better than this? True, the car had quite a few miles on it for a rental. However, the bigger problem above general wear and tear was its ergonomics, design, build quality, and fit and finish. The Turtle Garage gives the Corolla a C minus. 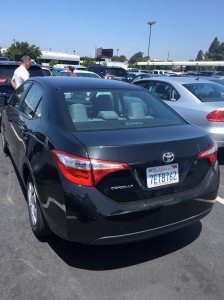 Our tin can 2014 Toyota Corolla. One of the worst cars I’ve driven in years. A true disappointment.

Philip Richter is President and co-founder of New-York-City-based Hollow Brook Wealth Management, LLC. The Turtle Garage Blog, he says, is dedicated to his "love of excessive personal transportation."
View all posts by Philip Richter →
Wrecked Exotics: The Stupid and the Sensational
Saturday Morning at Alice’s

2 Responses to California Dreamin: The Car Culture of SoCal