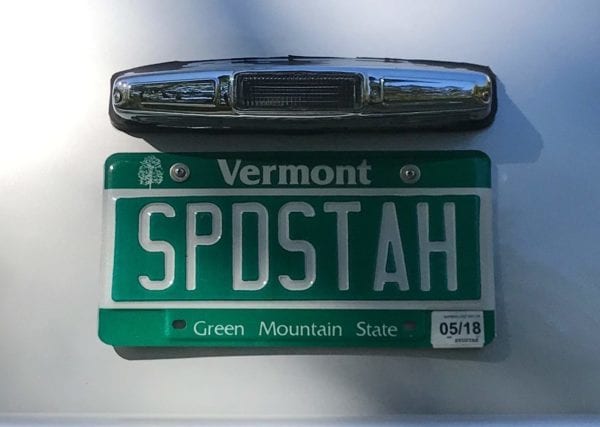 By Philip Richter on October 7, 2017 in Cars, Travel, Videos

“At slower speeds, the modern performance car is boring. Indeed, much of modern performance is purely ‘notional,’ good only for bragging rights. We’ve all experienced the truth of the adage, ‘It’s more fun to drive a slow car fast than a fast car slowly.'”

Dateline: Woodstock Vermont. I recently spent an unforgettable fall afternoon in Vermont behind the wheel of a Beck Speedster with my good friend David Beilman. The whole experience reminded me why I have such a burning passion for automobiles. Cars and motorcycles have brought great people and friends into my life and David Beilman is a prime example. David is a highly talented and successful architect who lives in Pomfret Vermont—a scant two miles from my family farm in East Barnard. I first met David “Doctor” Beilman well over a decade ago on a motorcycle trip with the American Flyers. After that epic trip, it was obvious that we would be friends for life. Together, his sense of humor and intellect form a rare and attractive personality. David has a passion for all things German and/or air-cooled. His BMW motorcycle collection includes an impressive array of vintage airheads and GS bikes. His car collection is equally appealing. His low-mileage pristine BMW 535is was a gift from his father to his mother when it was new back in 1988. David is now the custodian of this family heirloom German Q-ship. Recently he sent it to Ron Perry in San Diego and had the automatic transmission swapped out for a factory 5-speed. Can you say metamorphosis? This tasty enhancement has transformed the car into a world-class 1980’s super sedan. The real surprise in David’s garage does not have a BMW roundel—its an obscure small car called a Beck Speedster.

The Beck Speedster is a fiberglass shell mated to an advanced tubular frame. To the casual eye, the Beck replica Speedster shares almost identical proportions with the now stratospherically valuable 1957 Speedster. The Beck Speedster is produced in Bremen (Indiana!) by Special Edition, Inc. Beck manufactures modern reproductions of Speedsters, Spyders, and the legendary GTS. Based on my experience, I would not define the Beck Speedster as a fake, kit car, or a replica. Rather, I’d classify it as a fun and usable analog time machine. It’s a car that you can hammer down the dirt roads of Vermont—maintaining control without worrying about stone chips. With only 90 horsepower, it’s a car to use and enjoy on fair weather weekends.  It’s got a modern tubular frame design with advanced suspension and large disc brakes—so unlike a 1957 Porsche, it actually handles, accelerates, and stops. Sure a real Speedster is the purest expression of a vintage sports car, but you wouldn’t take the drive we did with a $400,000 rare antique car. We drove the wheels off the Beck and enjoyed every mile!

Our trip began in Pomfret along Webster Hill Road. The Beck Speedster immediately demands that both occupants relax and live in the moment. The Beck has a Zen-like effect that instantly drained away all my New York City stress. The buffeting of the low windshield filled my forehead with a tingle of delight. Once on the road, the Africa-like hot sun was offset by the occasional cold October shade. The light and responsive steering of the Beck puts the road right in your hands. You feel every imperfection in the pavement through the steering column—it’s not a nagging sensation but rather a welcome feel. All of the weight of the Beck Speedster is behind the driver and beneath the car. The twisty Vermont roads were made for this car! The small air-cooled motor pushes the car along and if you row through the gearbox right it feels like you are going fast. The gauges are in kilometers so when you glance down and the needle indicates 100 kilometers it feels thrilling—even though you are only going 60 mph. The radio-free silence obligates you to listen to the symphony of the 90 horsepower air-cooled motor—complete with fluttering valves and Aretha Franklin-like exhaust notes. We made a short stop for lunch at Sandy’s Books & Bakery in Rochester Vermont off Route 100. Within an hour we were driving by the Pitcher Inn in Warren Vermont. Faded and patinaed red barns flew by as David and I laughed, smiled, and, with each passing mile, solved the world’s problems. 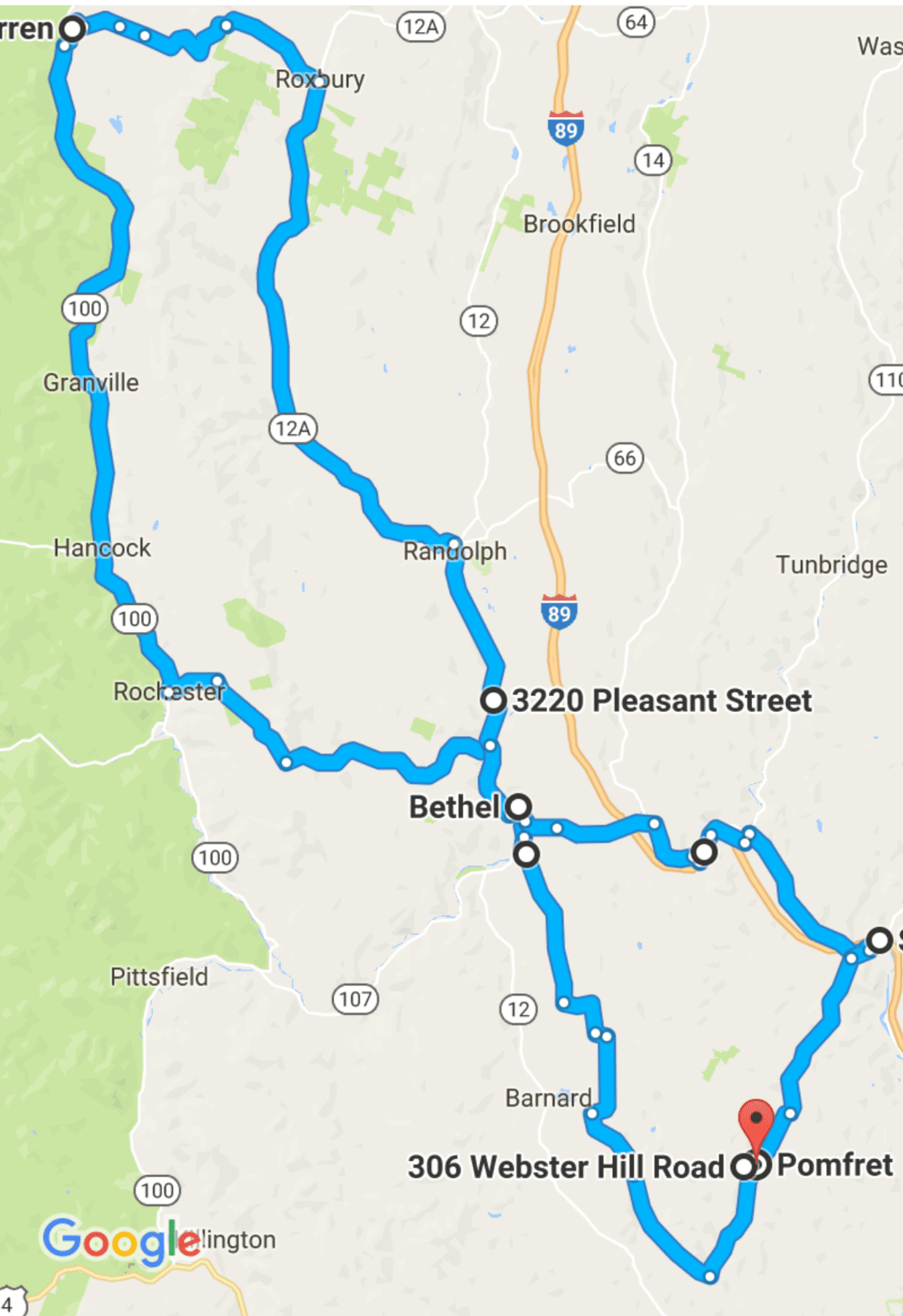 At the end of our drive, we pulled into a gas station and a small crowd formed. Open the front hood and the gas cap is inside and located at the center. The tank was almost empty but it only needed seven gallons to fill it. The little 90 horsepower motor just sips gasoline. The majority of the American public can’t distinguish a Beck from the real deal—but being a poser or pulling the wool over unsuspecting eyes is not a reason to own this car. Like a well-done replica of a Cobra 427, the Beck Speedster is impressive in its own right. Technologically its light years ahead of a real 356 Speedster. While its clearly pretending to be something it’s not, the Beck is far more competent than the original Porsche Speedster. It’s oxymoronic, but this Speedster knockoff is somehow an authentic original that is all its own and very comfortable in its own skin.

My advice: Try a Beck Speedster on for size but do it in central Vermont on a sunny October day and be sure to bring David Beilman along! The Beck Speedster is no speed demon but it further proves the adage, ‘It’s more fun to drive a slow car fast than a fast car slowly.” 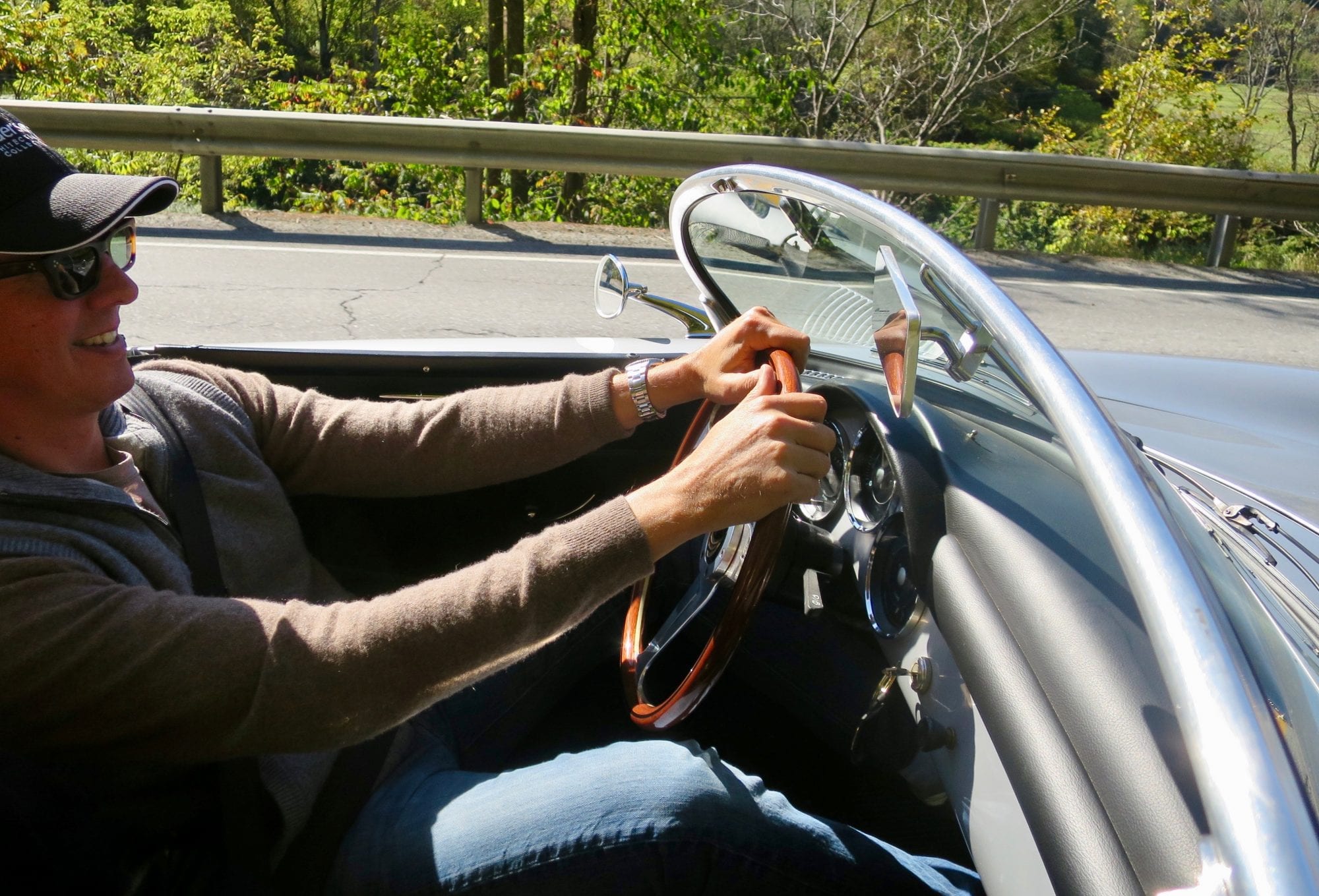 The Beck focuses you 100% on the road—all other worries fade away! 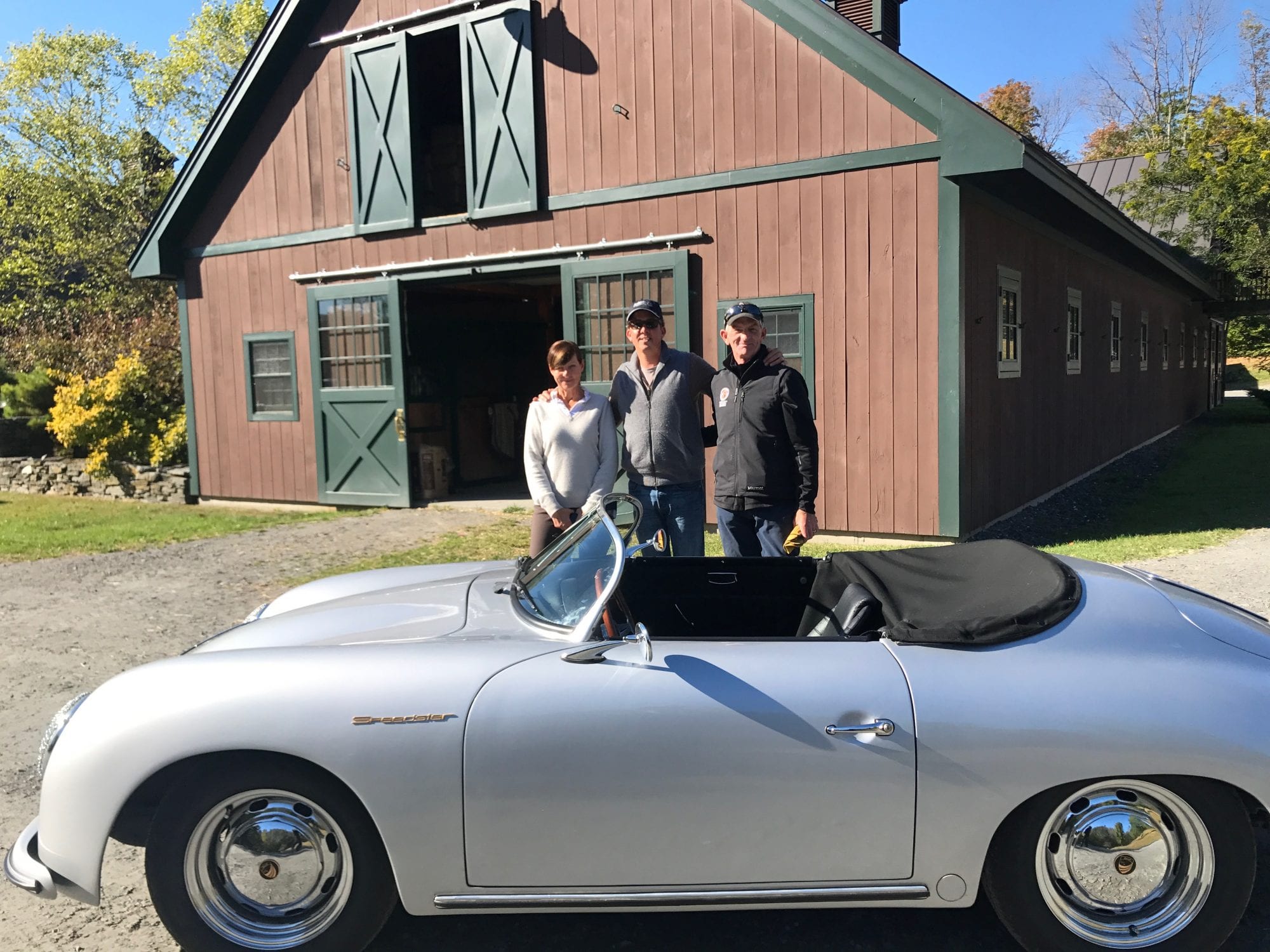 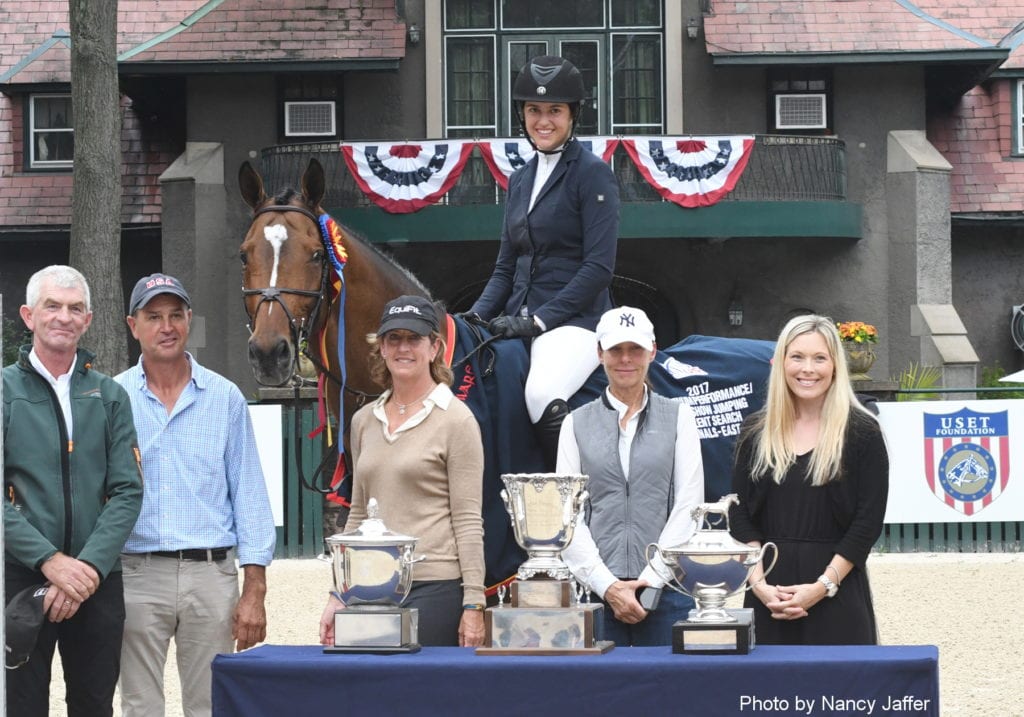 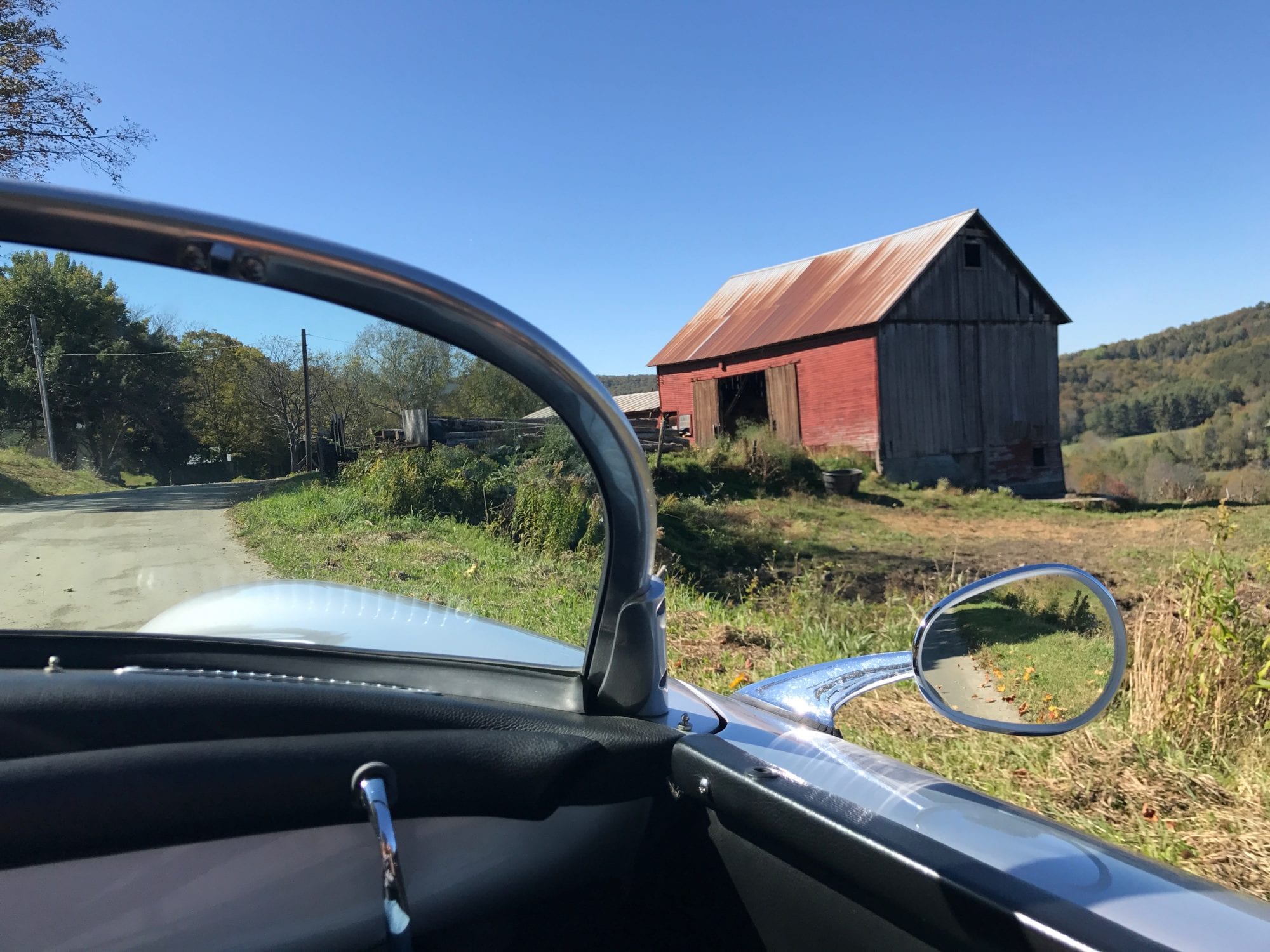 One of the dozens of red Vermont barns that we blasted past…. 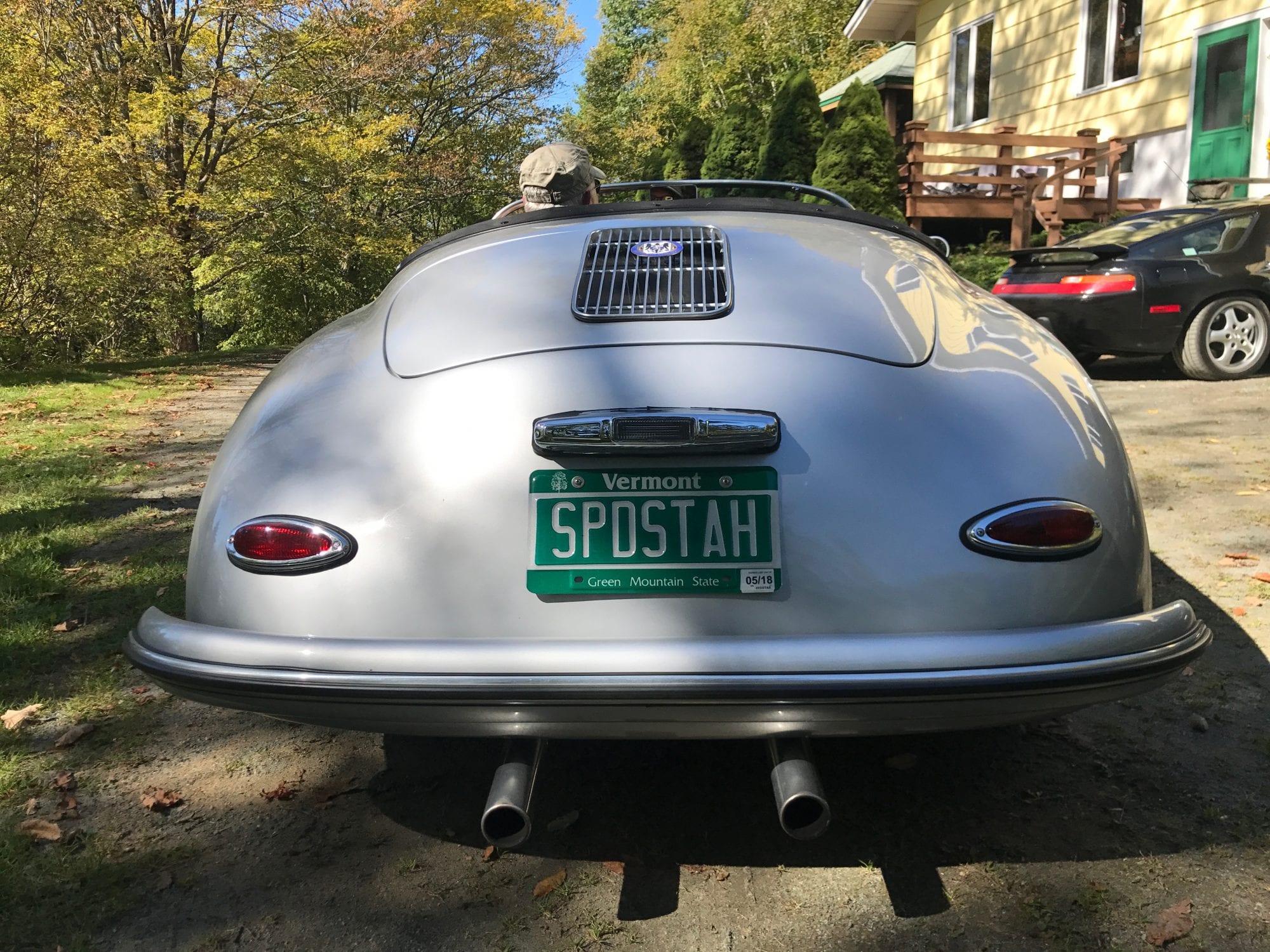 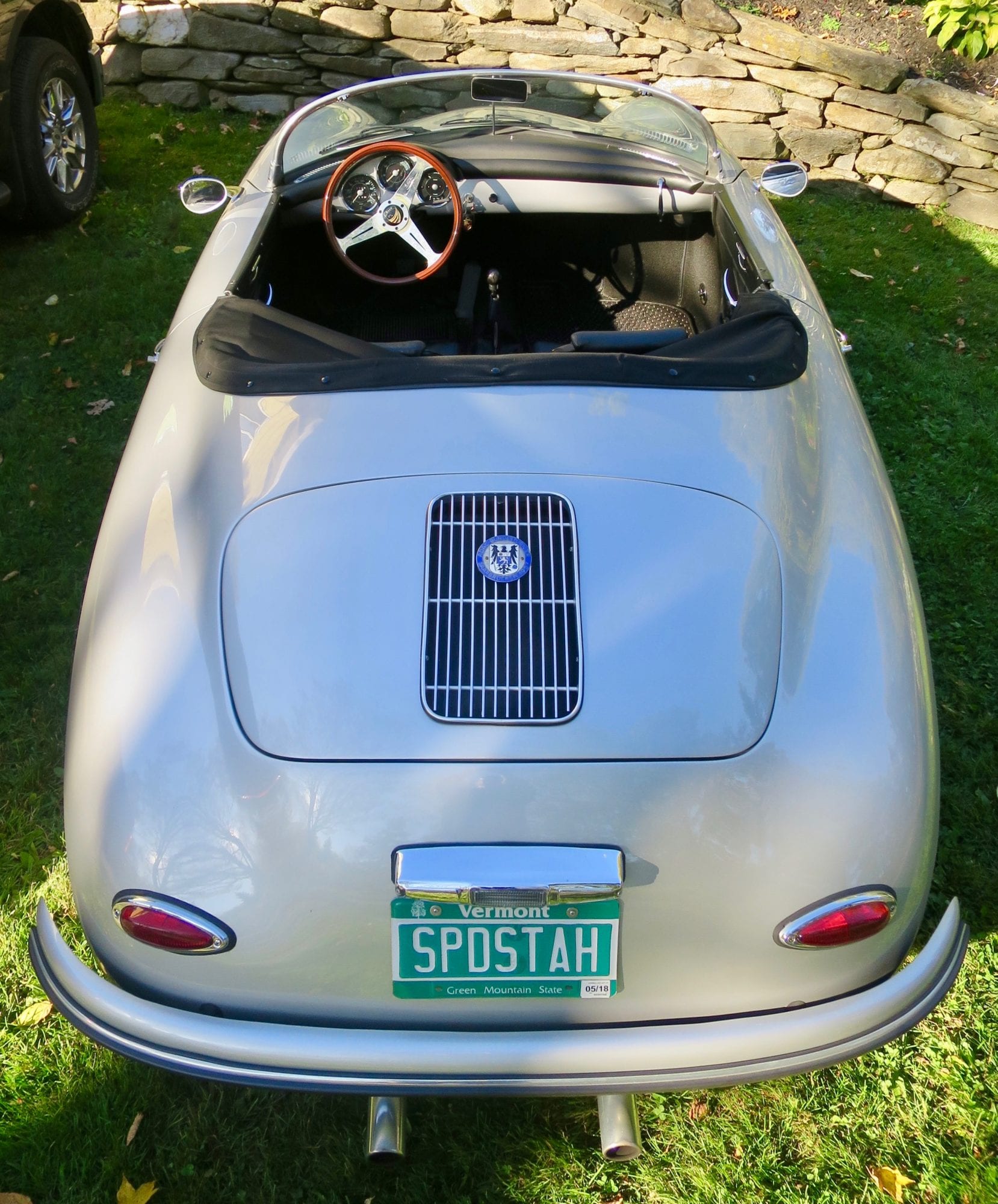 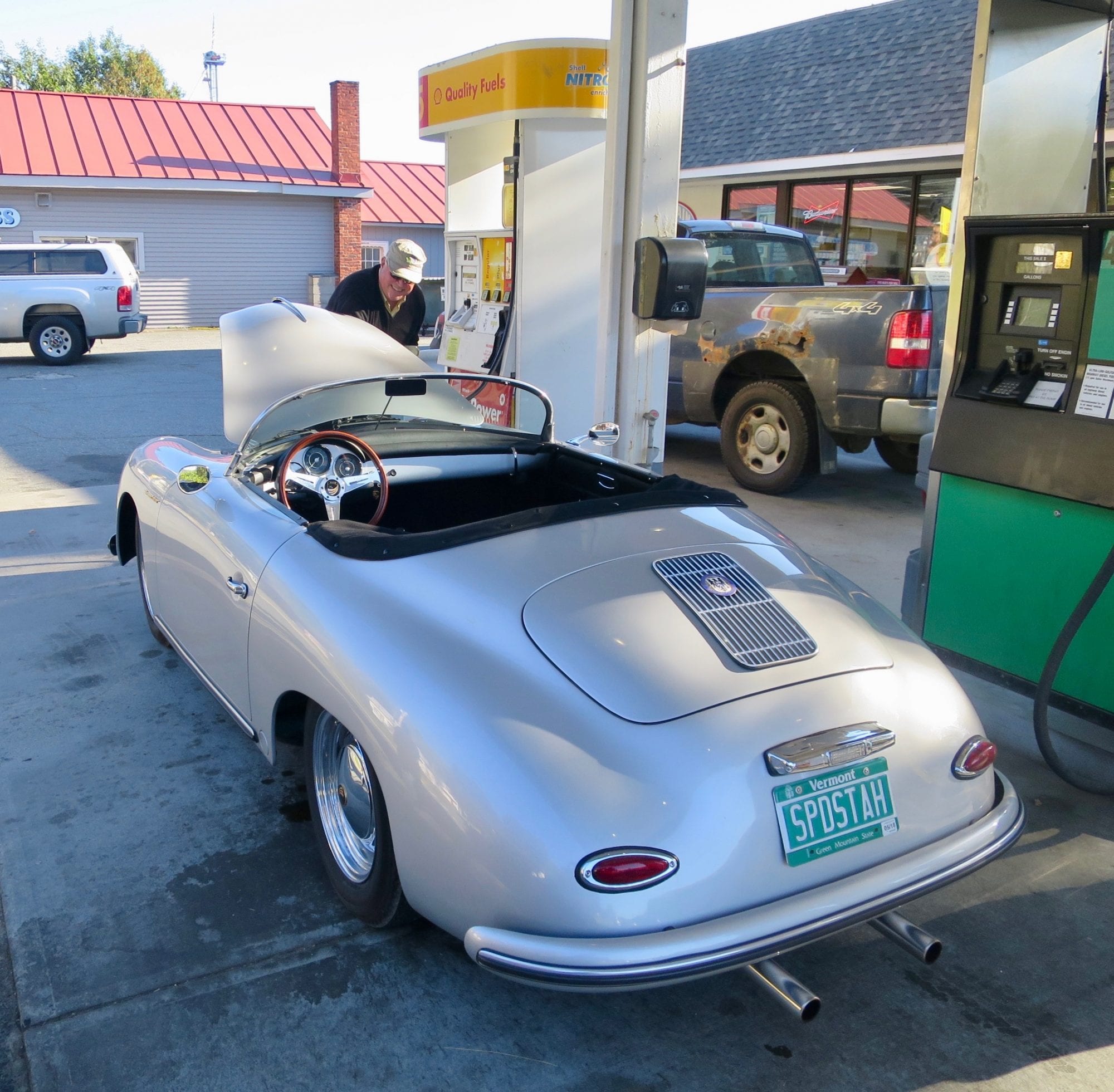 Filling up in Royalton Vermont