We have done so much, with so little, for so long, we are now qualified to do anything, with nothing.”   —Mother Teresa 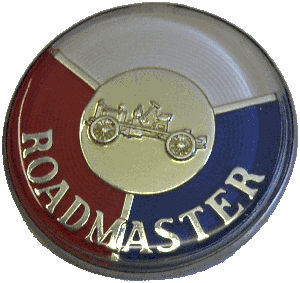 This quote from Mother Teresa personifies the ingenuity of Cubans who have a passion for cars and motorcycles. Except for some Russian Lada’s and Korean microcars, very few “new” post-1959 vehicles have made their way to Cuba. As a result, every big American 50’s car in Cuba has a story of survival. Most of these big thirsty V8’s were “cold stacked” during the so-called oSpecial Period—a time in the early 1990’s when the collapse of the Soviet Union had dire effects on Cuba’s economy. Oil, food, and political support dried up overnight. The tale that follows is a peculiar one. An American made 1953 Buick found a new life as a consequence of the fall of the Berlin Wall in 1989. In the rubble of the Soviet Union rose a Phoenix from the ashes.

Luis Gonzalez Saez Enrriqu’s 1953 Buick Roadmaster is an extraordinary automobile. It commands attention and respect everywhere it goes. Last April Luis was our tour guide while I was in Cuba with the American Flyers. Before departing for our cross-Cuba ride, Luis gave us a tour of his impressive workshop. Luis is an artist—and a mechanical genius. He is also the leader of the Cuban Harlistas, the Harley-Davidson Club of Cuba. It was here at his shop that I learned about the world of Cuban innovation and improvisation. Over the decades the Cuban people have had to go to great lengths to keep their vehicles running. With the U.S. embargo still in place, it is tedious to source parts and tires for the many ancient vehicles that still travel the roads of Cuba. Luis has taken the Cuban “can do” mindset and pushed this innovative “Cuban Solutions” culture to the limits. You can read some of the unbelievable stories Luis told to us while touring his shop last April here.

When we departed the garage in Havana for our cross-Cuba ride, I noticed his 1953 Buick parked in the corner. Upon our return to Havana after our trip, I spent time studying the car. What my eyes were trying to tell my brain did not compute. What I saw was not a Buick. It was not even a car! It was a masterpiece of engineering and ingenuity! On our last morning before leaving for Miami, I interviewed Luis to learn more about his 1953 Buick Roadmaster.

Get ready; this is a car with a story!

TG: Luis, tell me about the car!

LG: It was sold new in Cuba in 1953. It is the bigger model Roadmaster from the early 1950’s. It came standard with an automatic transmission and big V8. The cylinders have a four-inch cylinder bore!

TG: How did the Buick mutate into what it is today?

LG: In the crisis of the early 1990’s many of us were forced to change our engines. Gasoline was expensive and hard to find. Diesel was more available and more economical. I installed a British made Perkins diesel motor. Now it has serious power! I adapted a heavy-duty Hyundai transmission from a truck. I had to machine parts myself. I cut metal and had to size every detail for all the distances and tolerances to be exact. The clutch distance must be precise and be mathmatically calculated, or it will all not work. I made my shims. If you do the math wrong, your bearings won’t work, and you will get dangerous friction. The differential came from a 1960’s Chevy. The gearbox was heavily modified and customized to have twin overdrive mechanisms. This configuration allows for very high gearing which gives the Roadmaster great mileage. The car can go 70 kilometers on a liter of diesel!! The highly modified gearbox also has a very low first and second gear which gives it superior hill power. The Roadmaster can pull anything I put behind it. I often pull a trailer with four Harley-Davidsons inside.

TG: Does your Buick have a name?

LG: The Buick has many names. Some of my friends call her the Galleon. A Galleon was a Spanish sailing ship in use from the 15th through 17th centuries. They were originally used as warships and later used for trade. Galleons were mainly square-rigged and usually had three or more decks and masts. The Roadmaster looks like a Galleon going down the highway! Some of my friends also call it Frankenstein. Others call it a Buick Sandwich.

TG: Tell us about the parts in your Buick and how do you source them?

LG: The steering wheel comes from a Russian Lada. The steering gear and power hardware are from a Kia Sportage. The brake disc assembly is from a Mercedes Sprinter. There is a network here in Cuba. I talk to friends, and I get parts from wrecked American cars. For example, my radiator is from an old Kia. The pressure pump is from Toyota. The generator and power brakes also come from a wrecked Toyota. If a part fails I try to upgrade and find a better new one. I do not look for any original Buick parts. Instead, I go for something that I can make or retrofit. I have converted the Roadmaster to four wheel drive with the many parts I have sourced from abroad. I used a Mercedes Sprinter bearing with a Chevy differential to put a sophisticated and reliable four wheel drive system together. I adapted it all from a used Chevy differential. All these parts together form a symphony. You can travel at high speed with no vibration. The Buick can also go off road in deep mud and rough terrain. The combination of the Kia-Mercedes-Chevy-Toyota transmission and differential concoction is that the Buick can pull anything. It is like an ant that can carry many times its weight! I try to find the best parts to put in my car and I often upgrade perfectly good parts to make the car stronger and stronger. If something breaks I replace the original part with a better part from another vehicle.

TG: When did you start building the Buick?

LG: I started creating Frankenstein about eleven years ago. We were planning to have a baby, and we needed a car. I couldn’t take my wife and baby on a motorcycle! I also needed a good all around work car for business. It has taken over a decade to build the Buick. It has evolved, and I still get new ideas every day. It is like a work of art in the sense that it is never finished. For example, I recently needed more cargo space, so I cut the trunk up and re-designed the space, and it can fit two Suzuki motorcycles as well as several pieces of luggage. The car can also sleep four comfortably because the rear seat now converts into a large king bed. I can sleep in the car with my wife and kids and its perfect for hunting and camping.

TG: So the Buick is not just a car anymore?

LG: The Buick is a lot of things. It’s a camper. It’s a tow vehicle. It’s a road cruiser. It’s an off-road vehicle and also a hunting car. The most important thing is that I can use it every day for everything! It’s the ultimate 1953 Roadmaster four-wheel-drive diesel SUV. I can carry 17 sacks of sand for construction and it hauls concrete. But I can also cruise down the highway. It makes a lot of noise, and it’s very high up. When you drive the Buick, it is like riding in a tank! You sit up really high above everyone else! 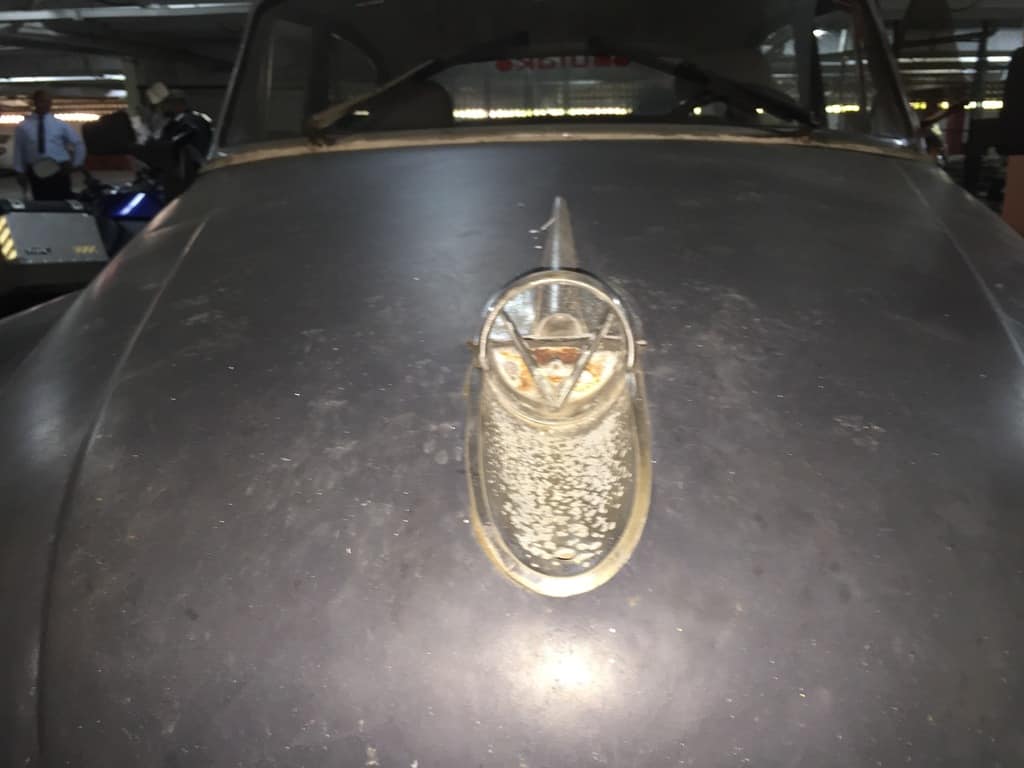 The original Buick ornament is still in place! 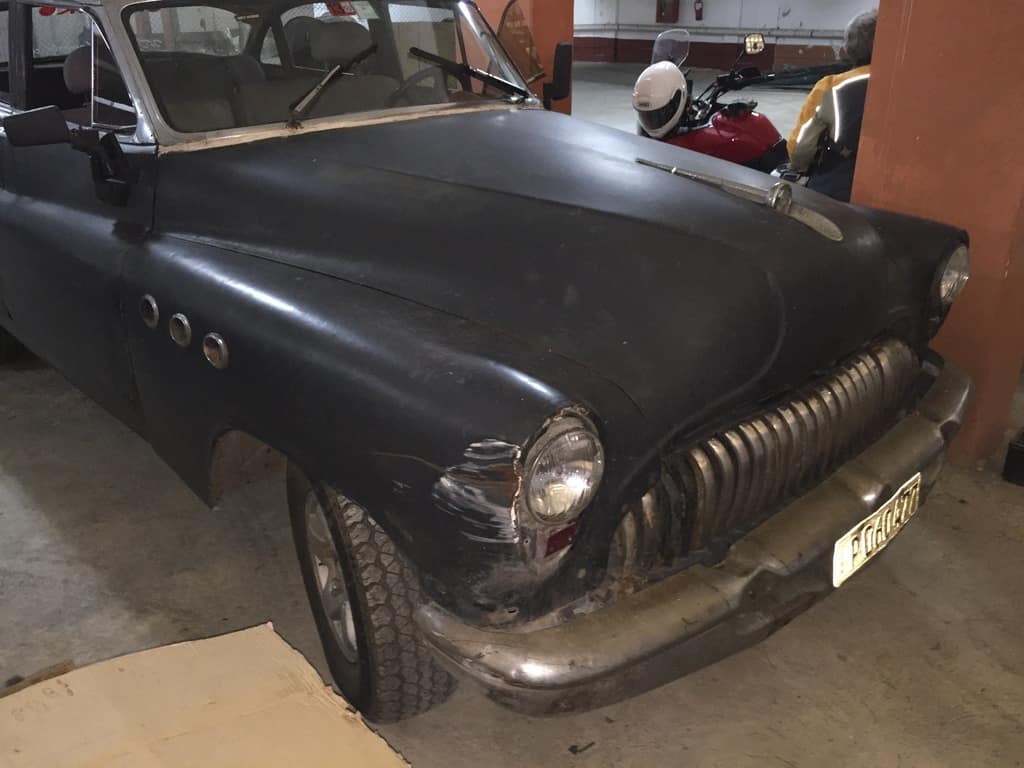 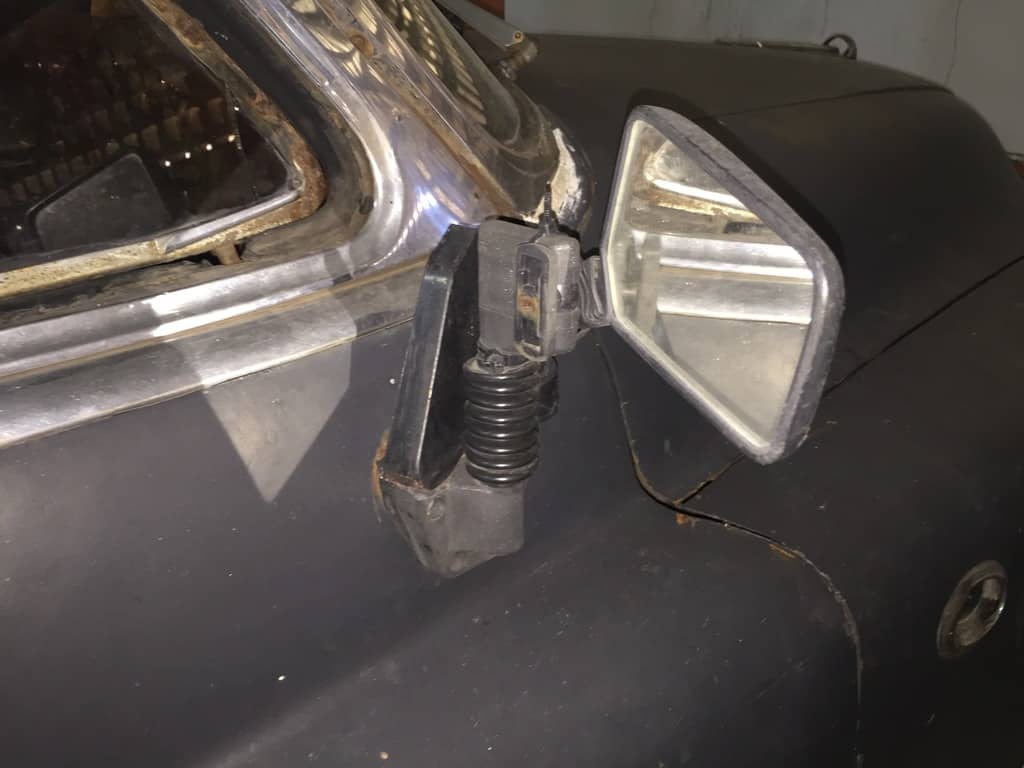 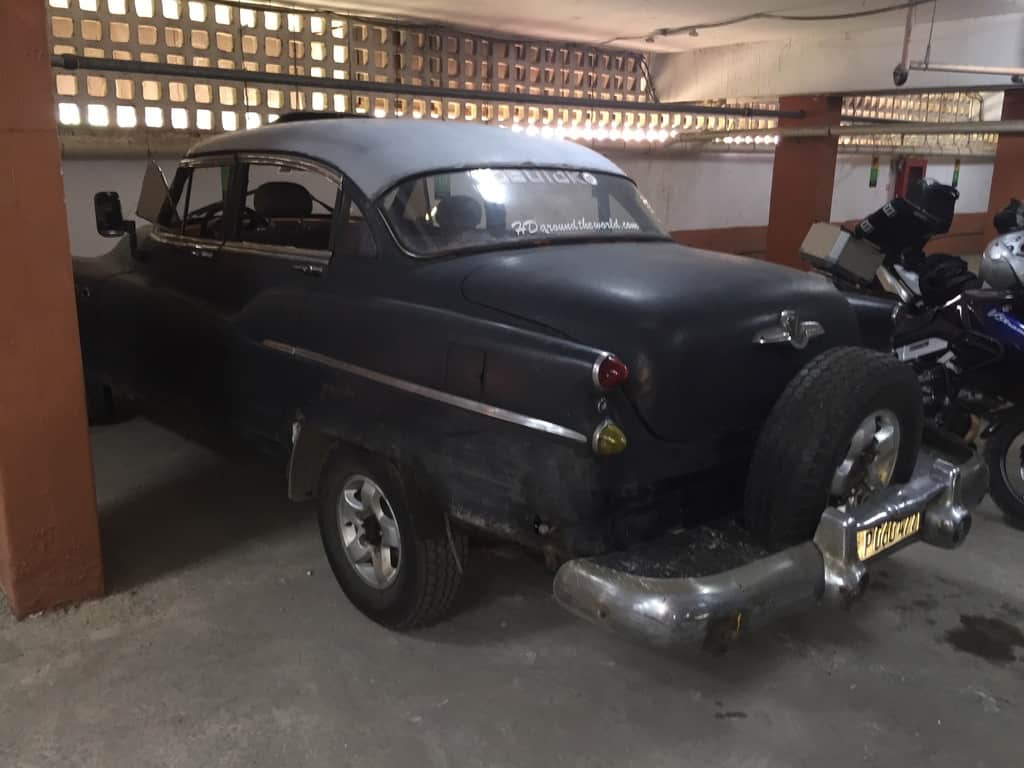 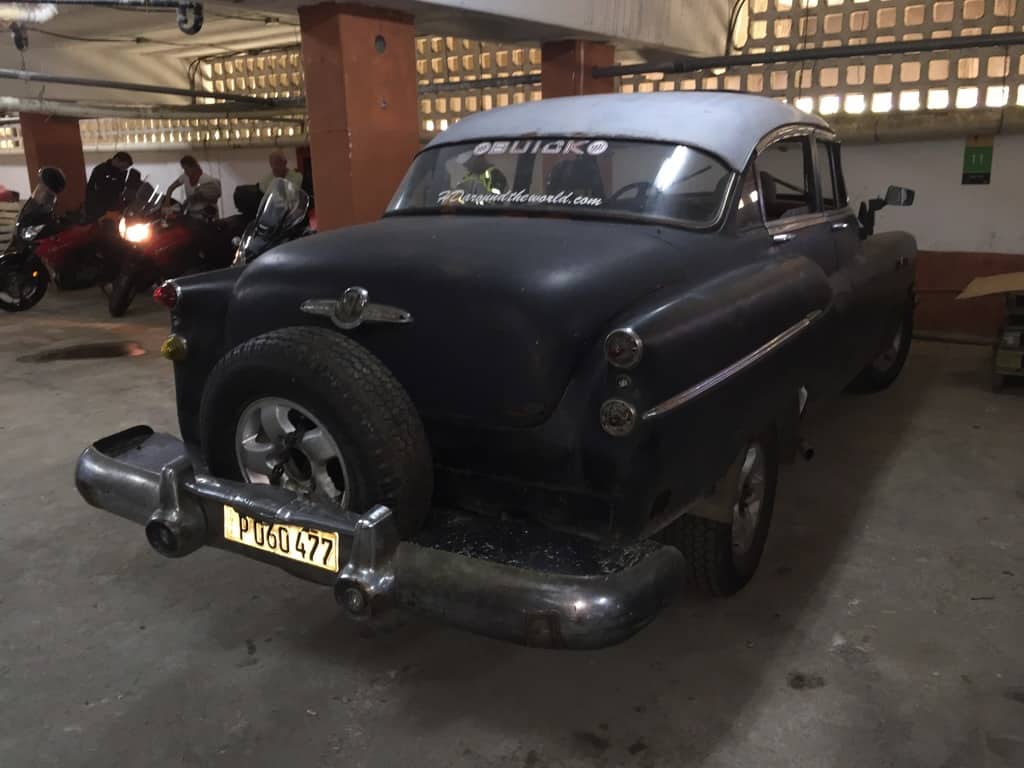 From this angle you see how lifted the Buick really is! 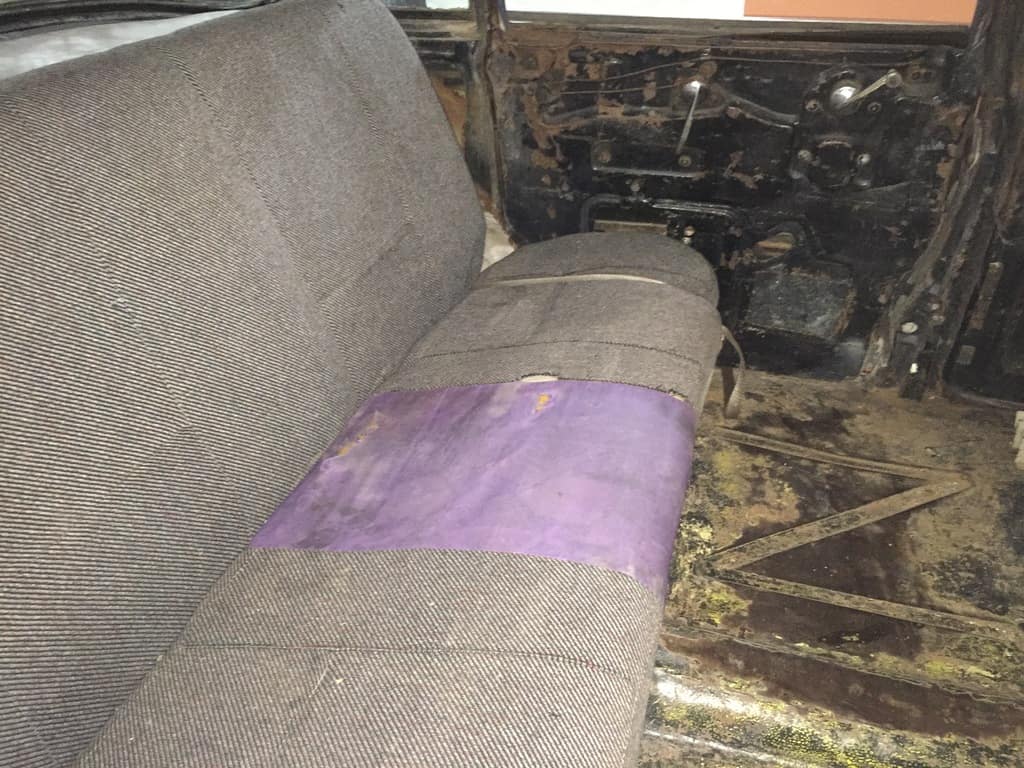 The bench seats are as long as a football field…. 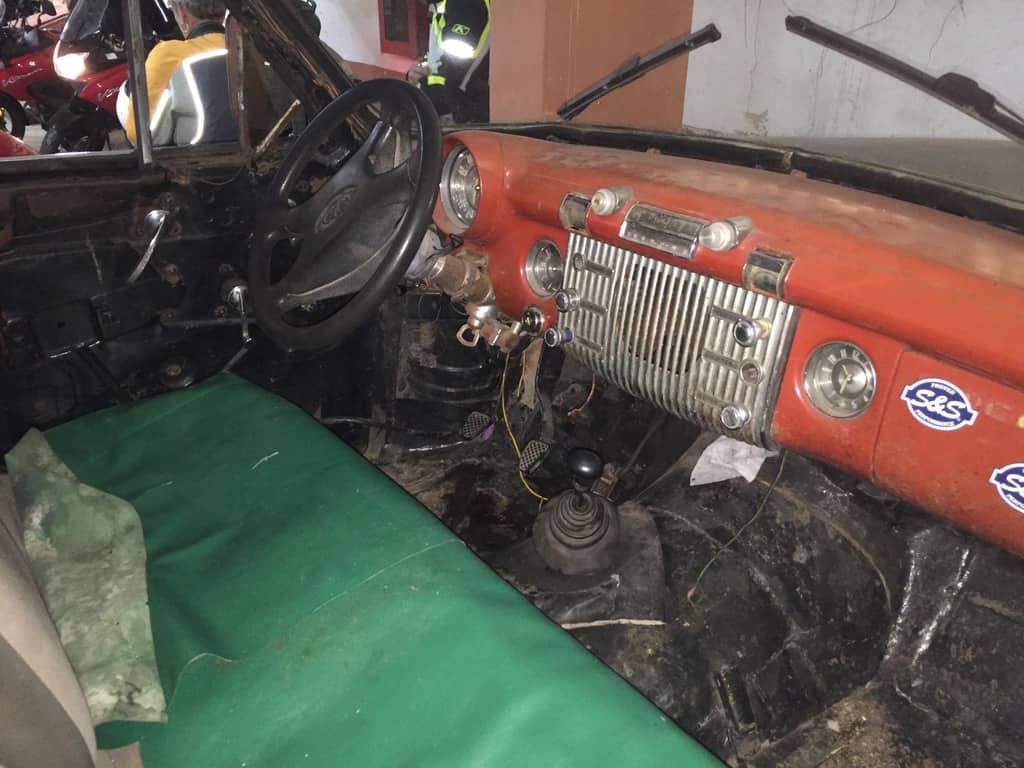 The interior is a mix of Russian, Japanese and American style! 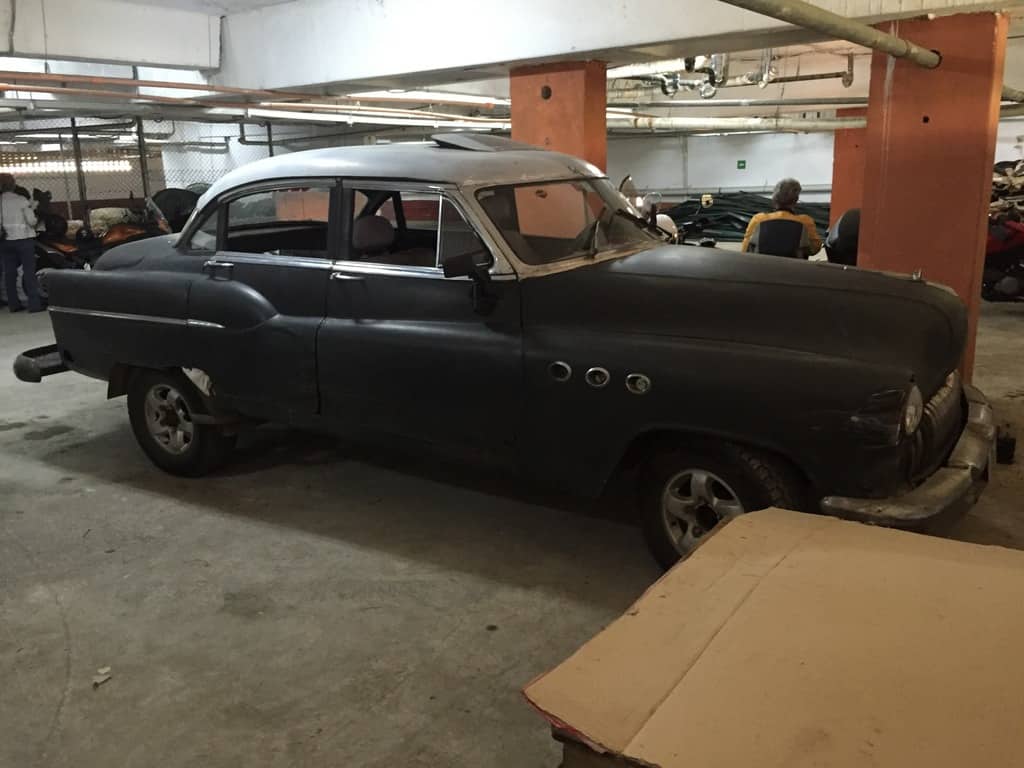 What follows are photos of Luis’s shop in Havana where he makes the impossible possible! I have also included a video where Luis explains his how is own self-made welding tool works. 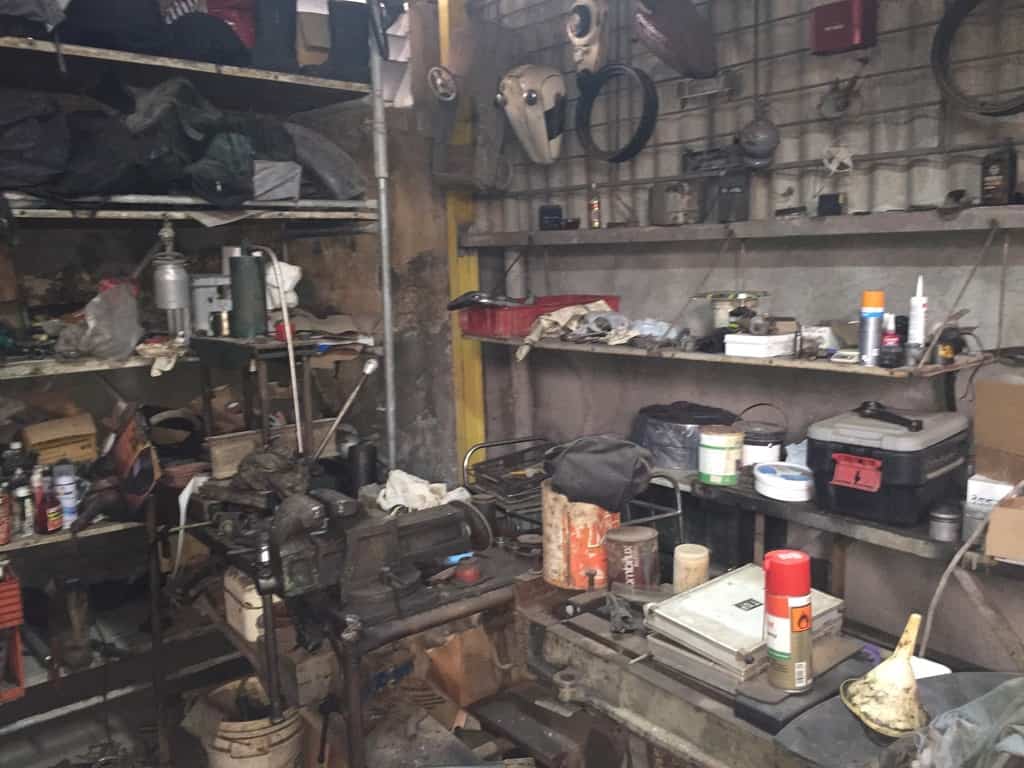 His workshop includes an inventory of collected parts and related repair equipment. This is where magic happens! 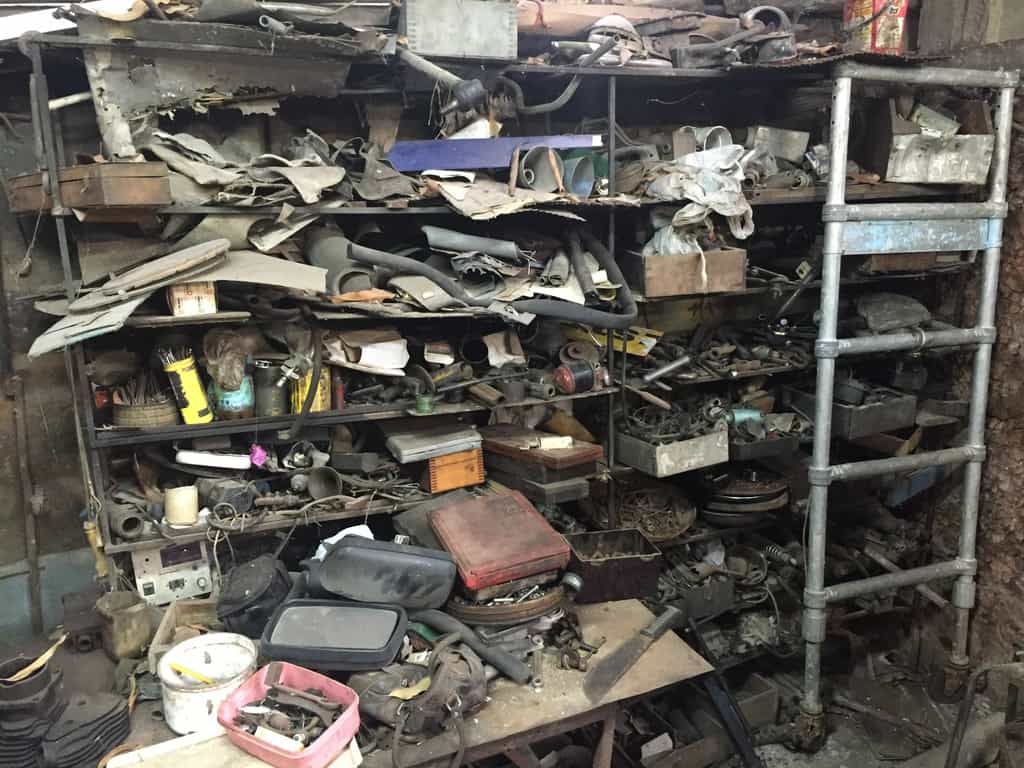 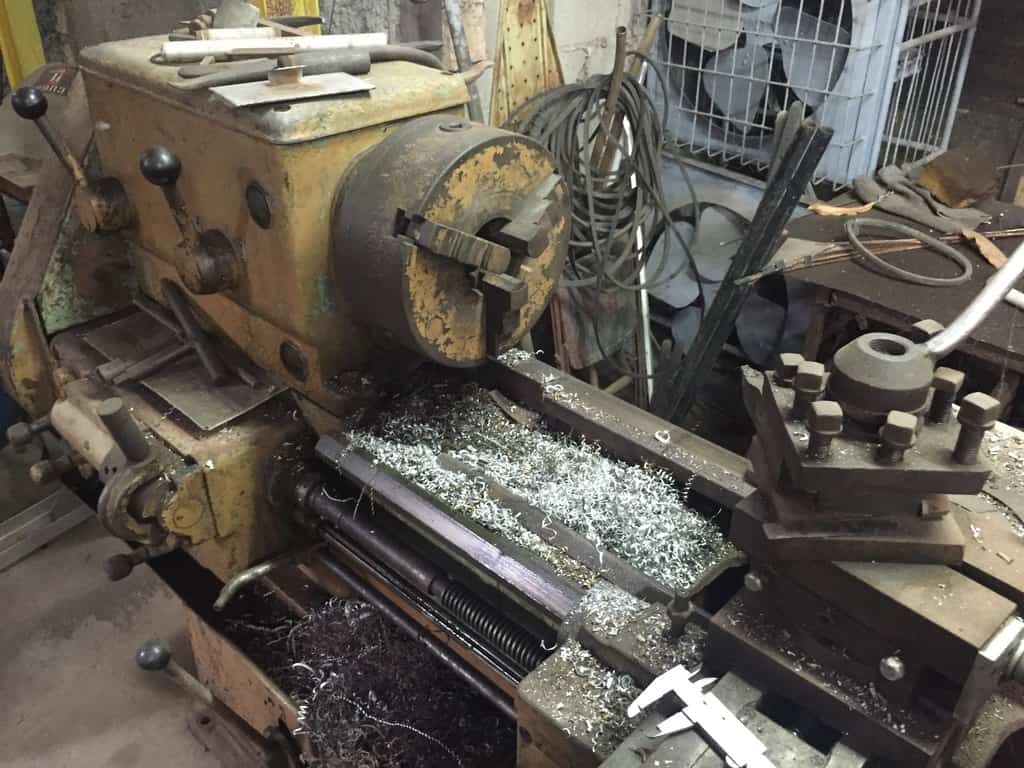 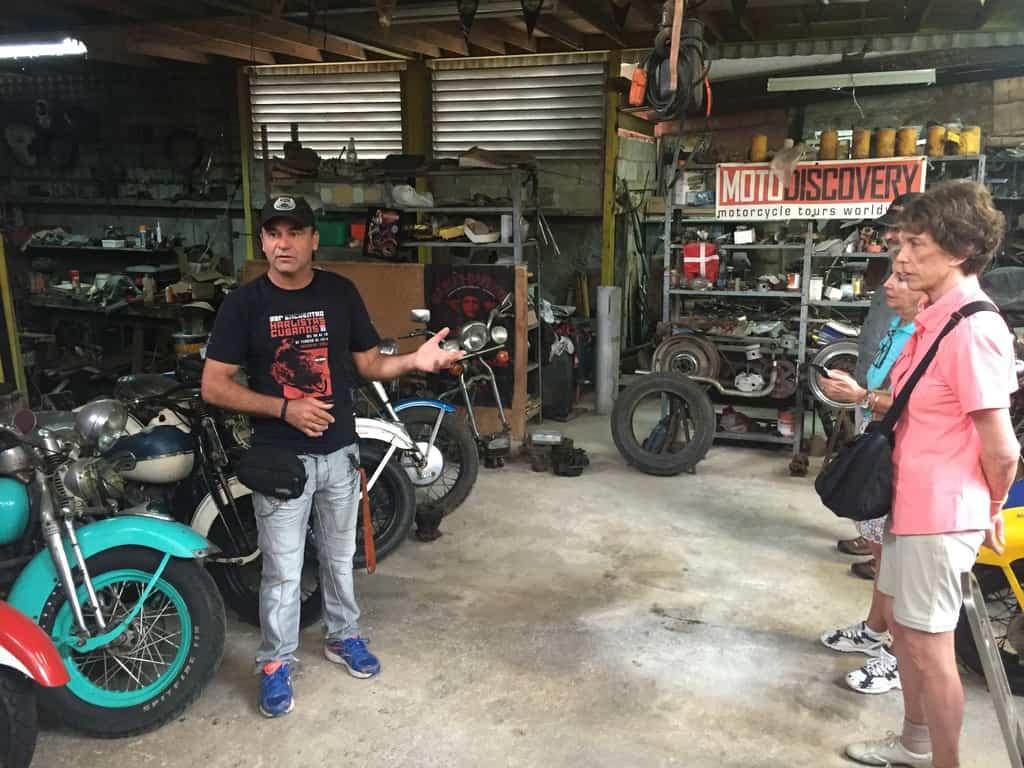 Luis in his shop in suburban Havana 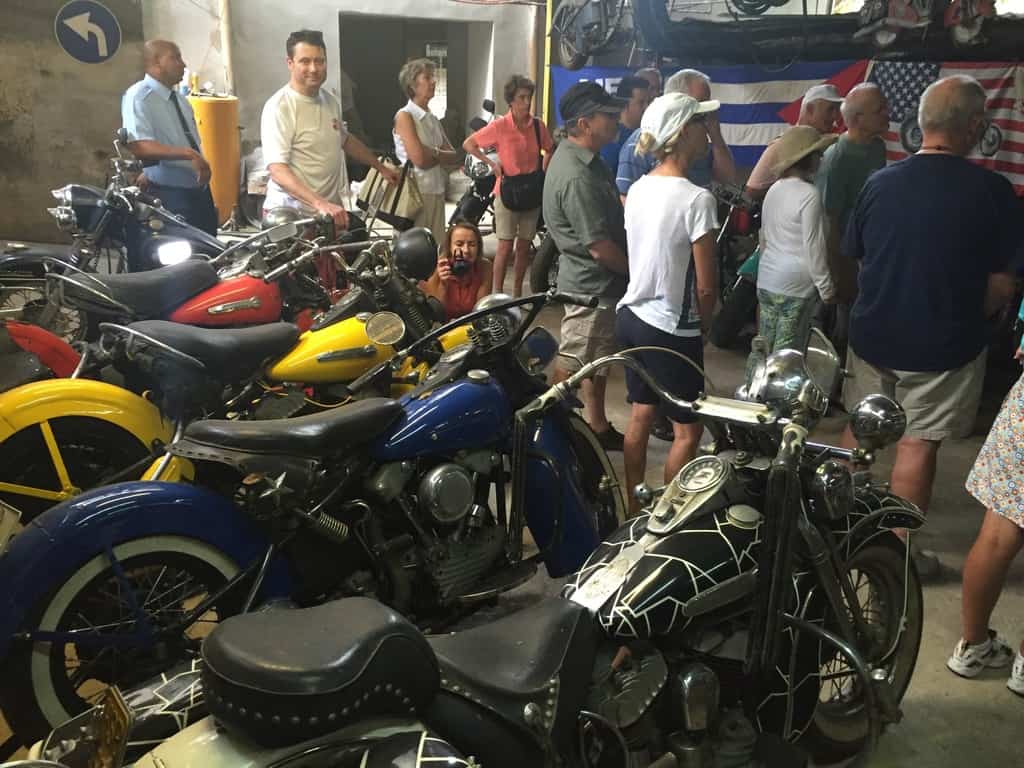 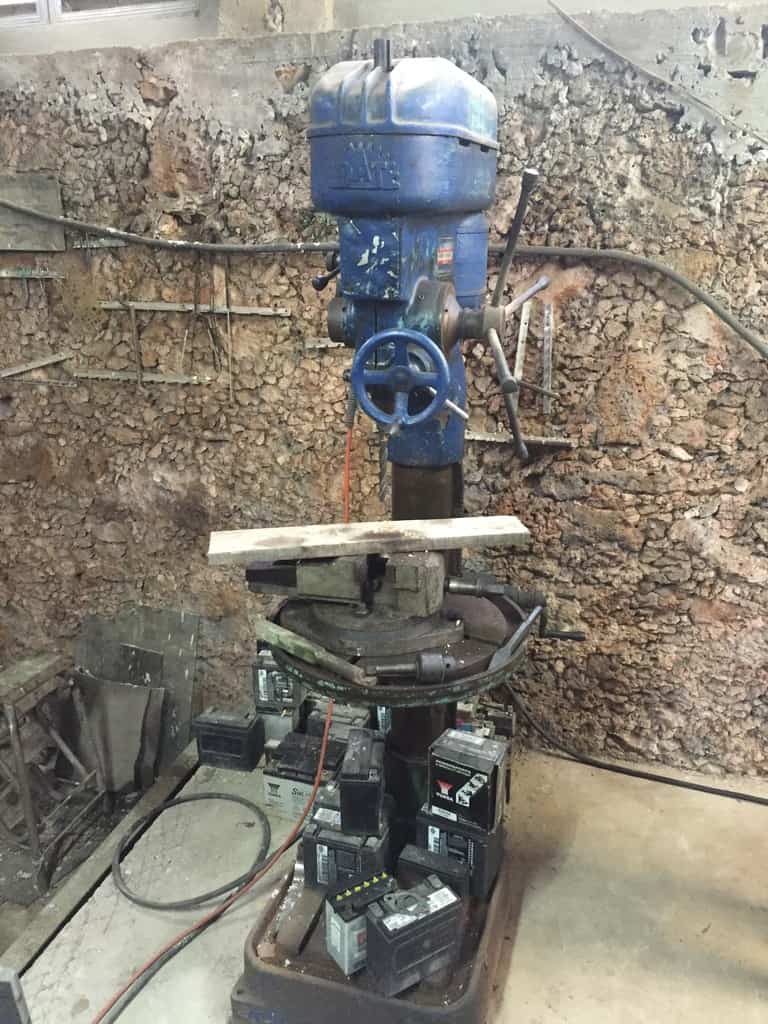 Drill press that has made many parts! 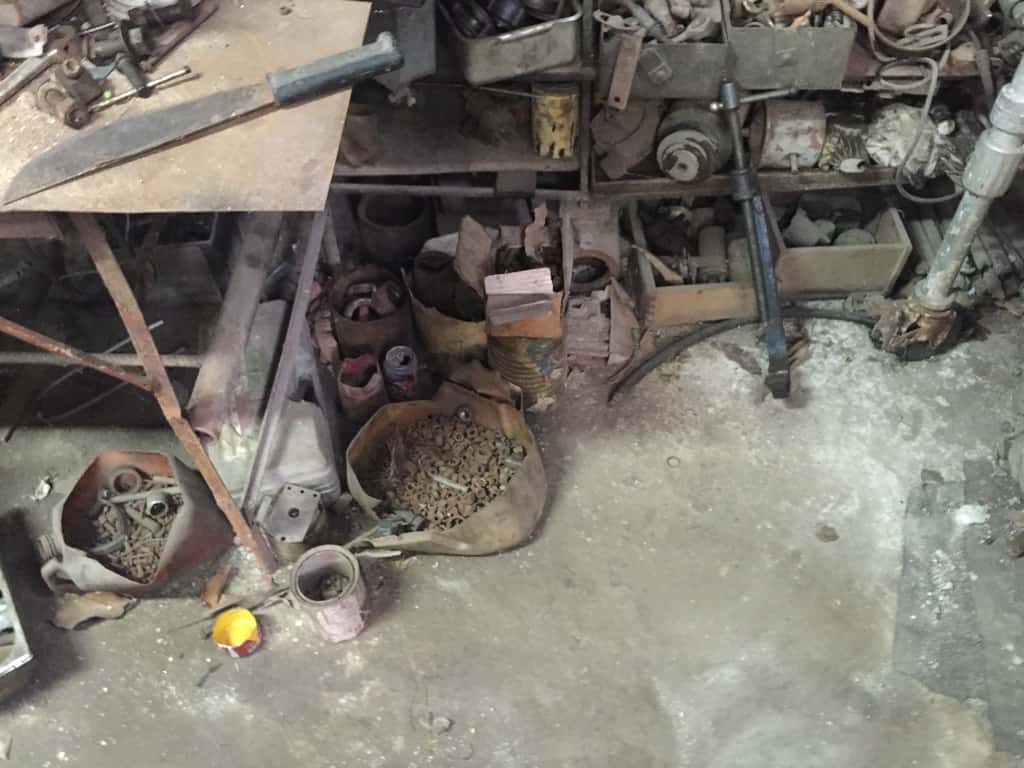 Sometimes when machines don’t get the required results you have to resort to a huge knife! 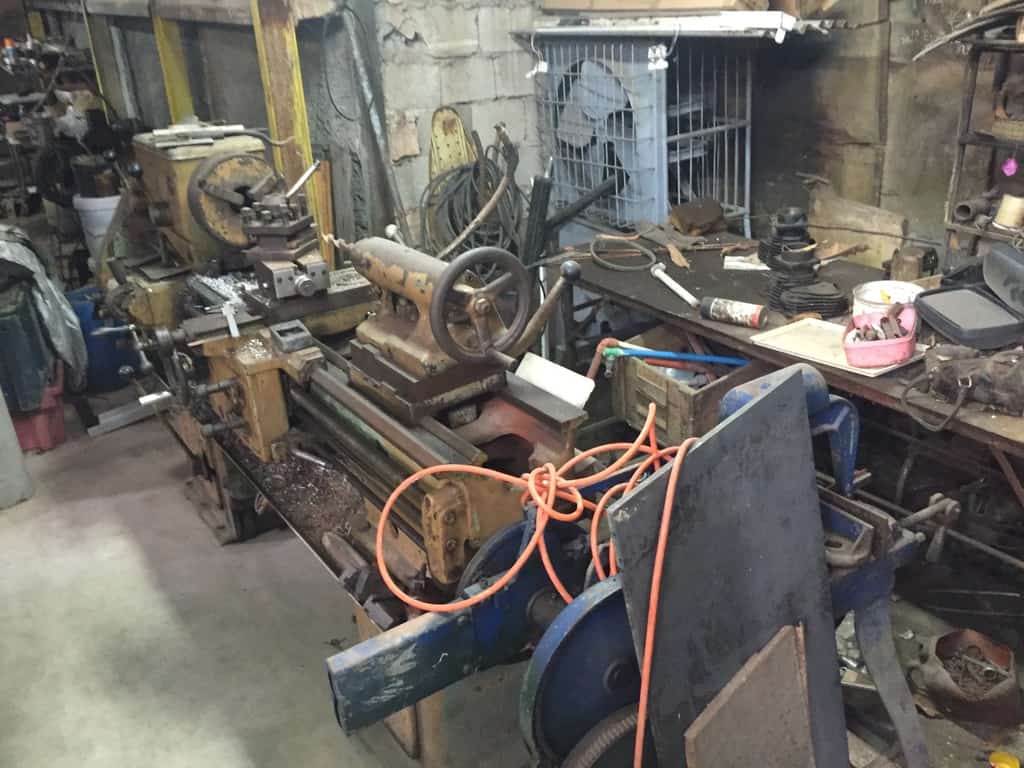 Philip Richter is President and co-founder of New-York-City-based Hollow Brook Wealth Management, LLC. The Turtle Garage Blog, he says, is dedicated to his "love of excessive personal transportation."
View all posts by Philip Richter →
1936 Berlin Auto Show: A Retrospective
Building the Perfect Beast: The Construction of Turtle Garage