“The success of Miami’s inaugural Grand Prix this month was a sign of what new Formula 1 events may look like, such as providing weekend-long entertainment with concerts.“ —Luke Smith, The New York Times

In early May, Turtle Garage attended the inaugural F1 race in Miami. The event was a spectacle and sure to gain more momentum as F1 breaks further into the crowded American sports calendar. The Austin GP and Las Vegas GP (coming in 2023) are two more American races now on the global F1 schedule. Without a doubt, F1 is taking off in America. Most experts agree that the recent surge in F1’s popularity is closely related to the Netflix documentary series Drive to Survive. But the sport also has all the ingredients that attract spectators and sponsors—politics, drama, intrigue, money, competition, and, of course, the battle between man and machine.

The Miami F1 race was a 72-hour dinner/dance party and concert with an F1 race in the background. This new race represents the future of F1—it’s not merely a car race; it’s an entertainment-filled three-day social event. The atmosphere was terrific on track and off, and the side events were spectacular if not decadent. There was a private concert at the DAER nightclub at the Hard Rock hotel. People sailed on Italian yachts to exclusive dinner parties. Gourmet food and champagne flooded luxury boxes on the finish line. Miami 2022 felt like the new Roaring 20s.

This inaugural race was a sporting event and social scene akin to a merger between the Kentucky Derby and Miami Art Basel. So many attendees were there to be seen, and they knew little about Lewis Hamilton or Max Verstappen or the myriad of complexities behind F1 racing.

The weekend was not without flaws. There were start-up pains and logistical challenges at the event (the food service at the Paddock Club had supply problems on Friday, prompting Mercedes-AMG to find another venue to entertain their guests). But overall, Miami F1 was a smashing success, and it will be bigger and better next year.

Below are some photos from our weekend. Many thanks to our hosts Gainbridge and Dan and Cassidy Towriss and Bill Shelton. 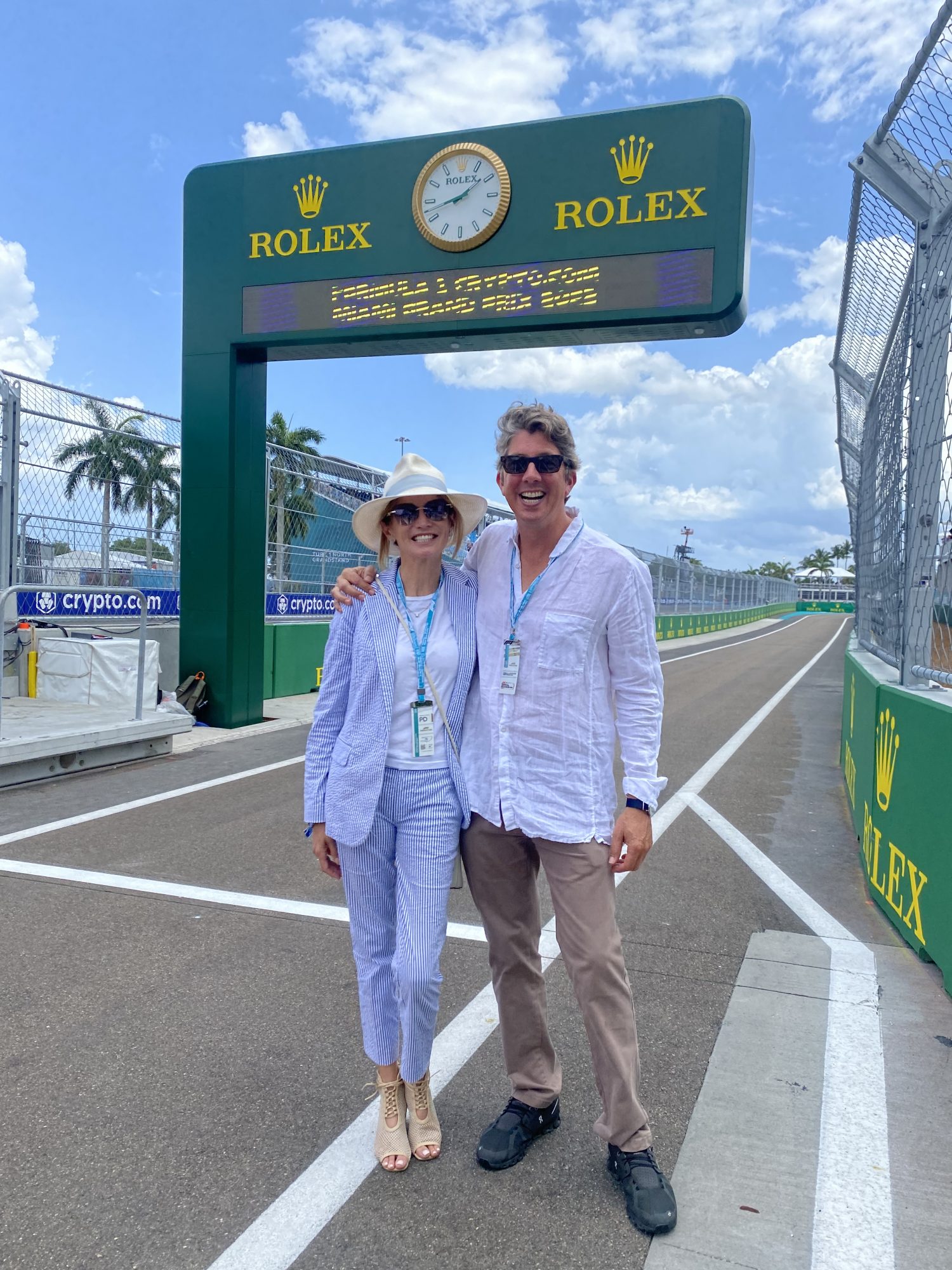 At the pit lane Miami F1 with Blythe Masters 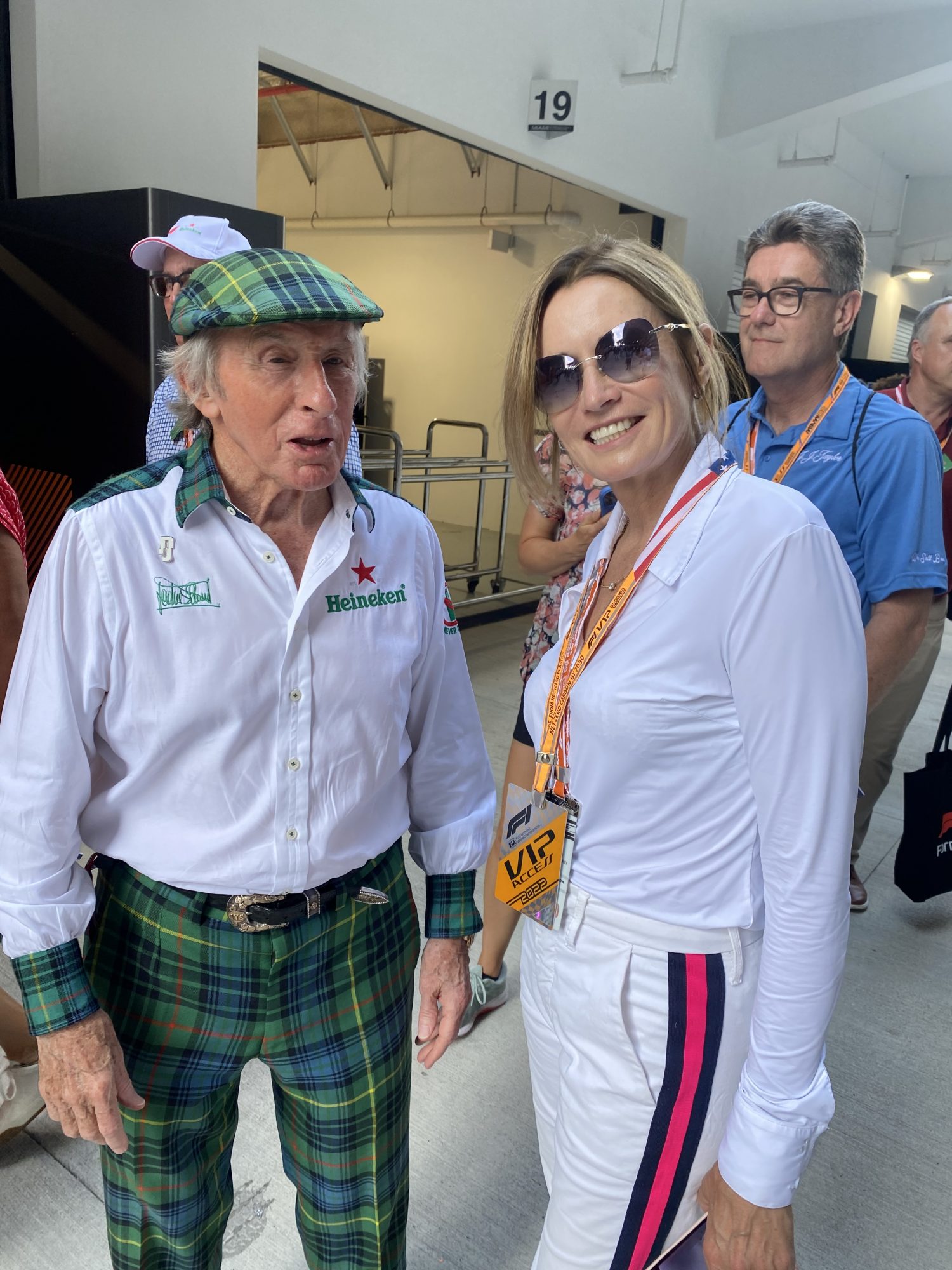 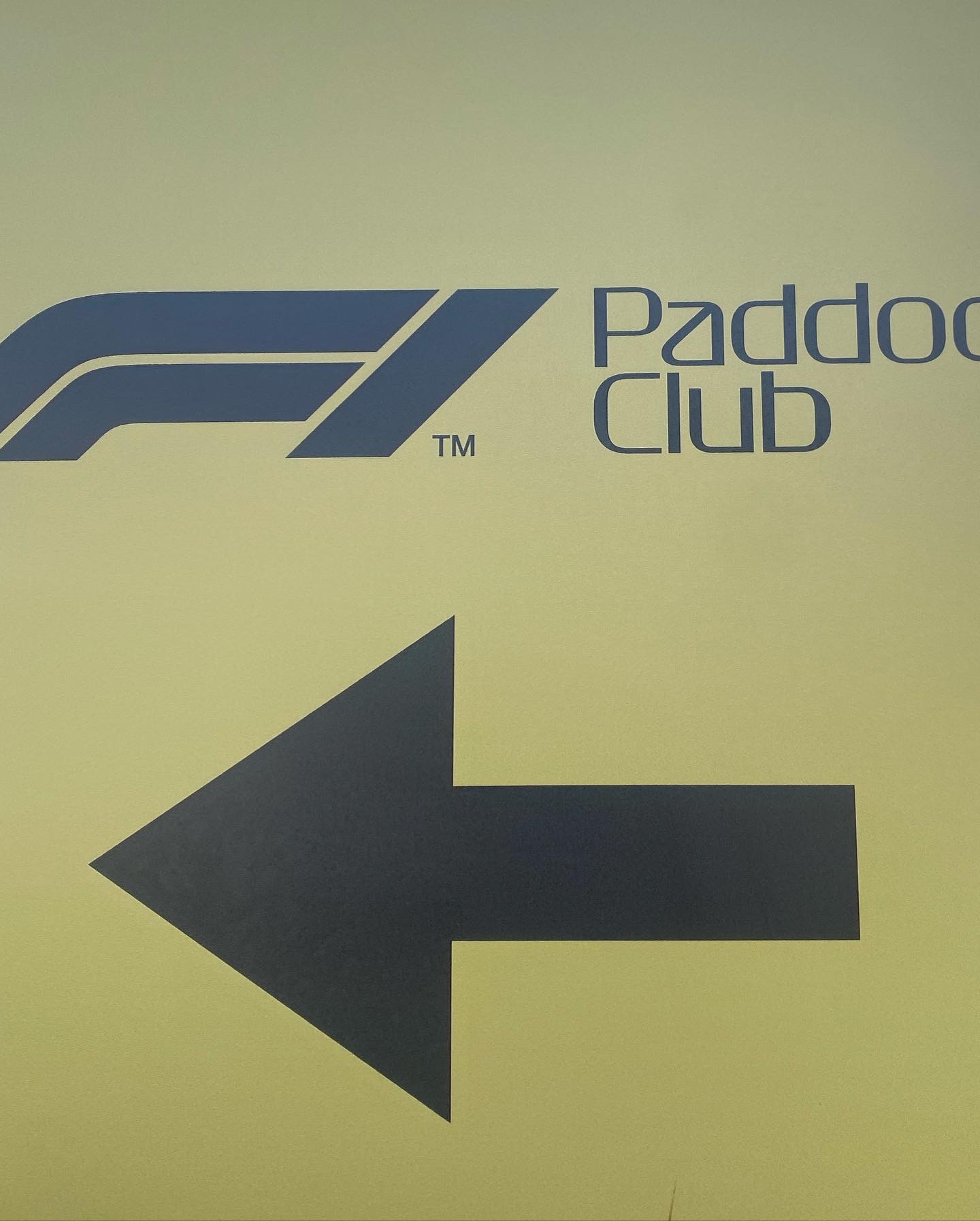 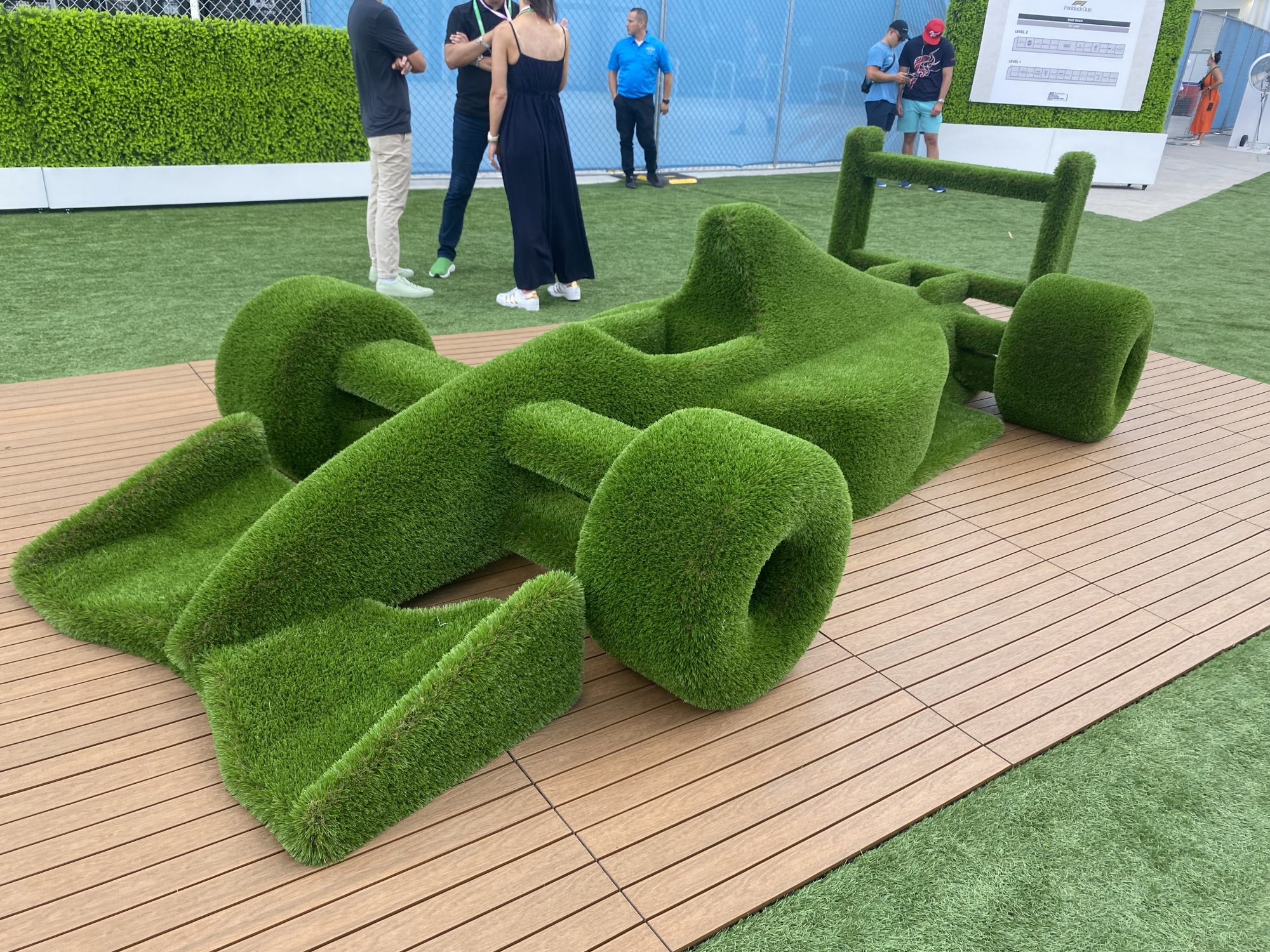 There was plenty of interesting things to see at Miami F1–a green F1 car! 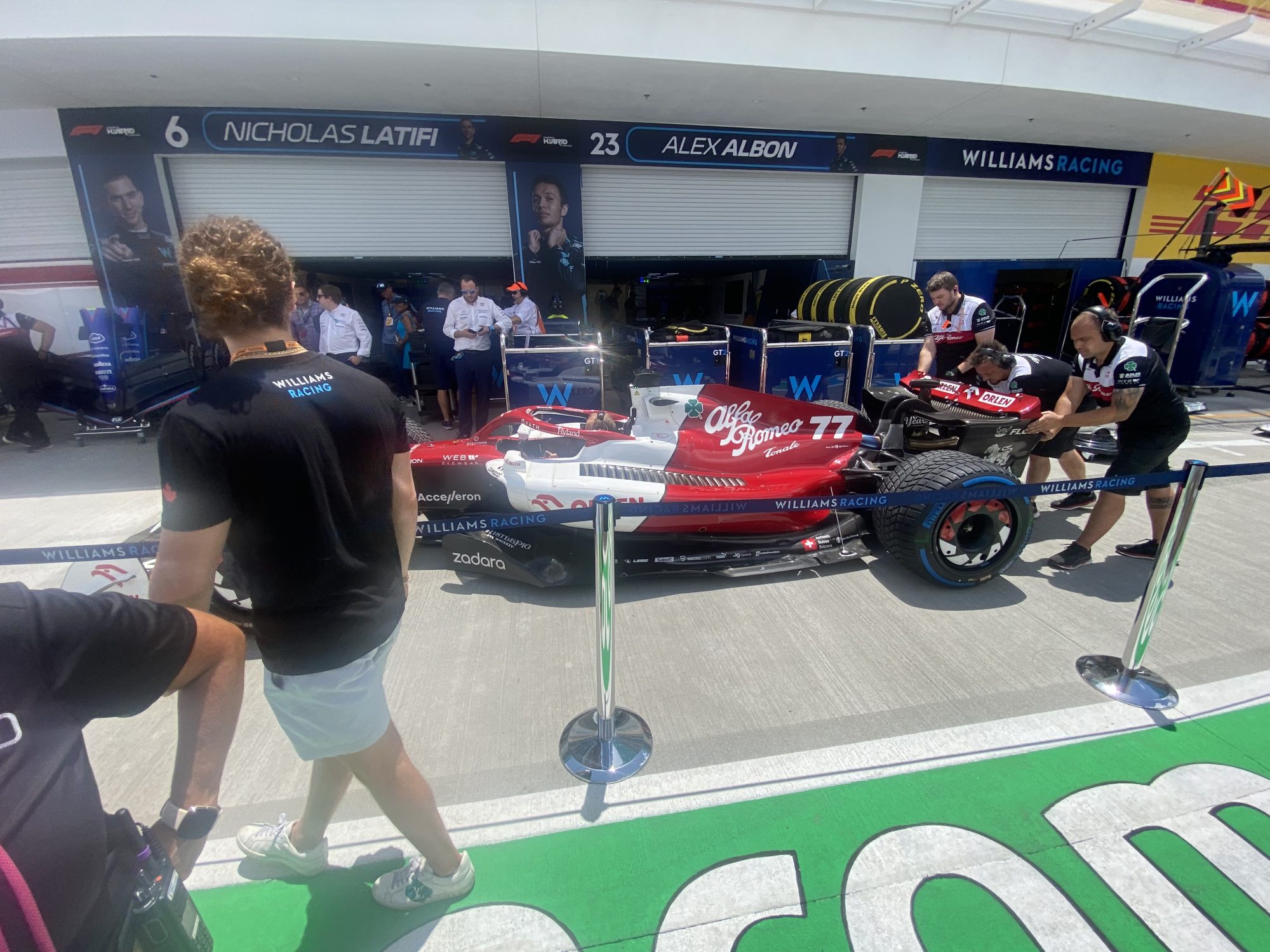 In the pits at Miami with Alfa Romeo 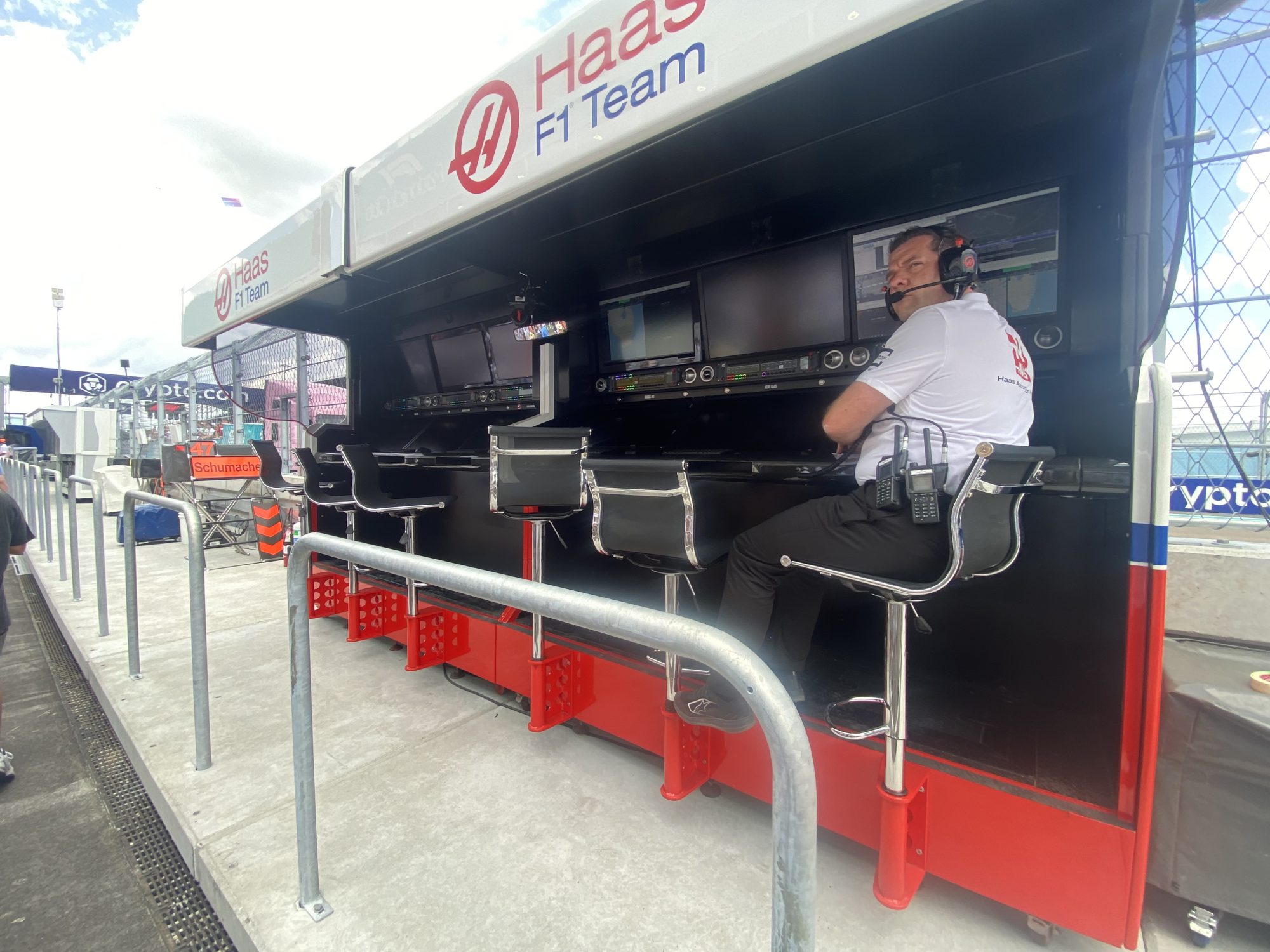 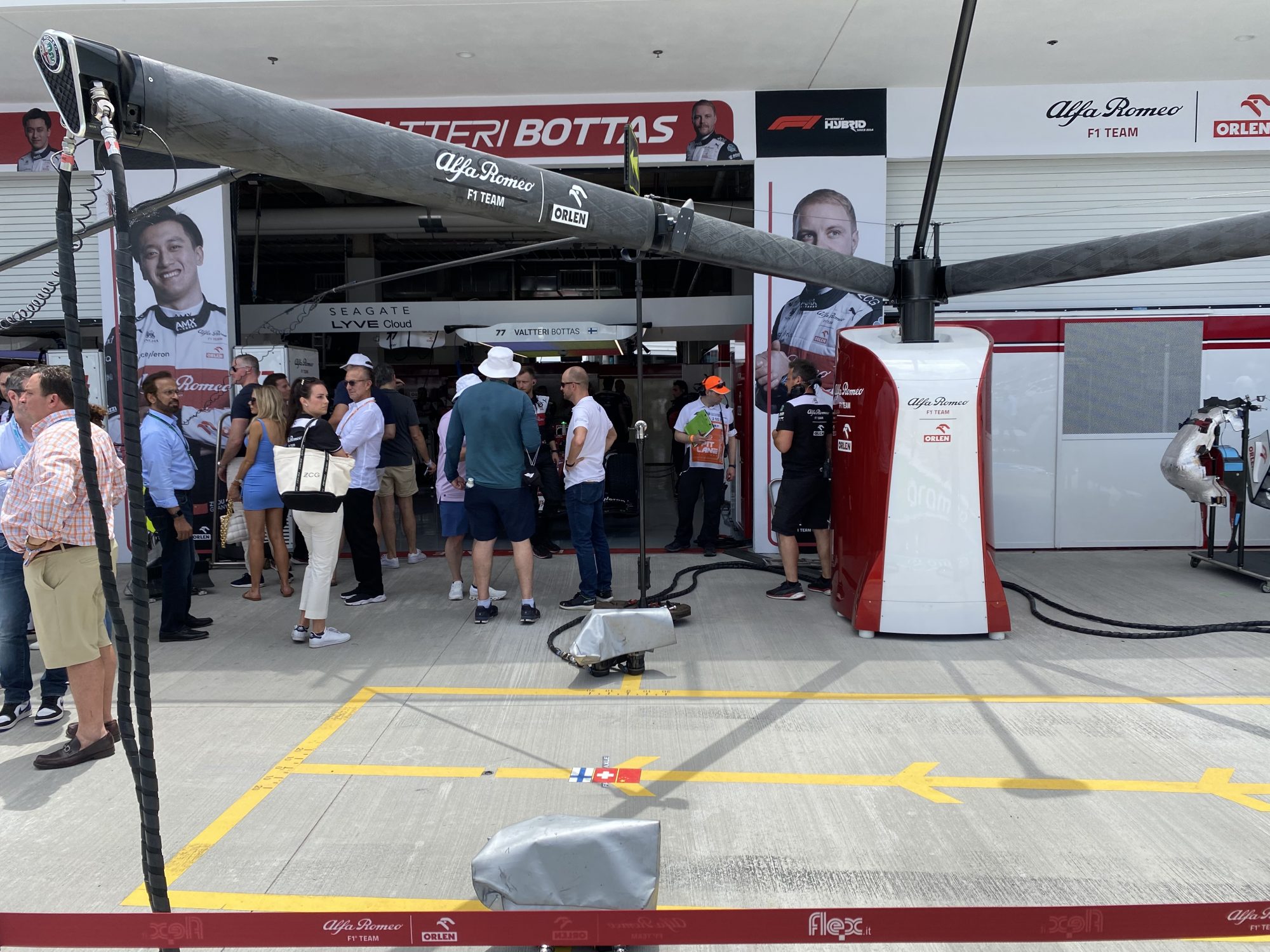 The F1 pit of Alfa Romeo 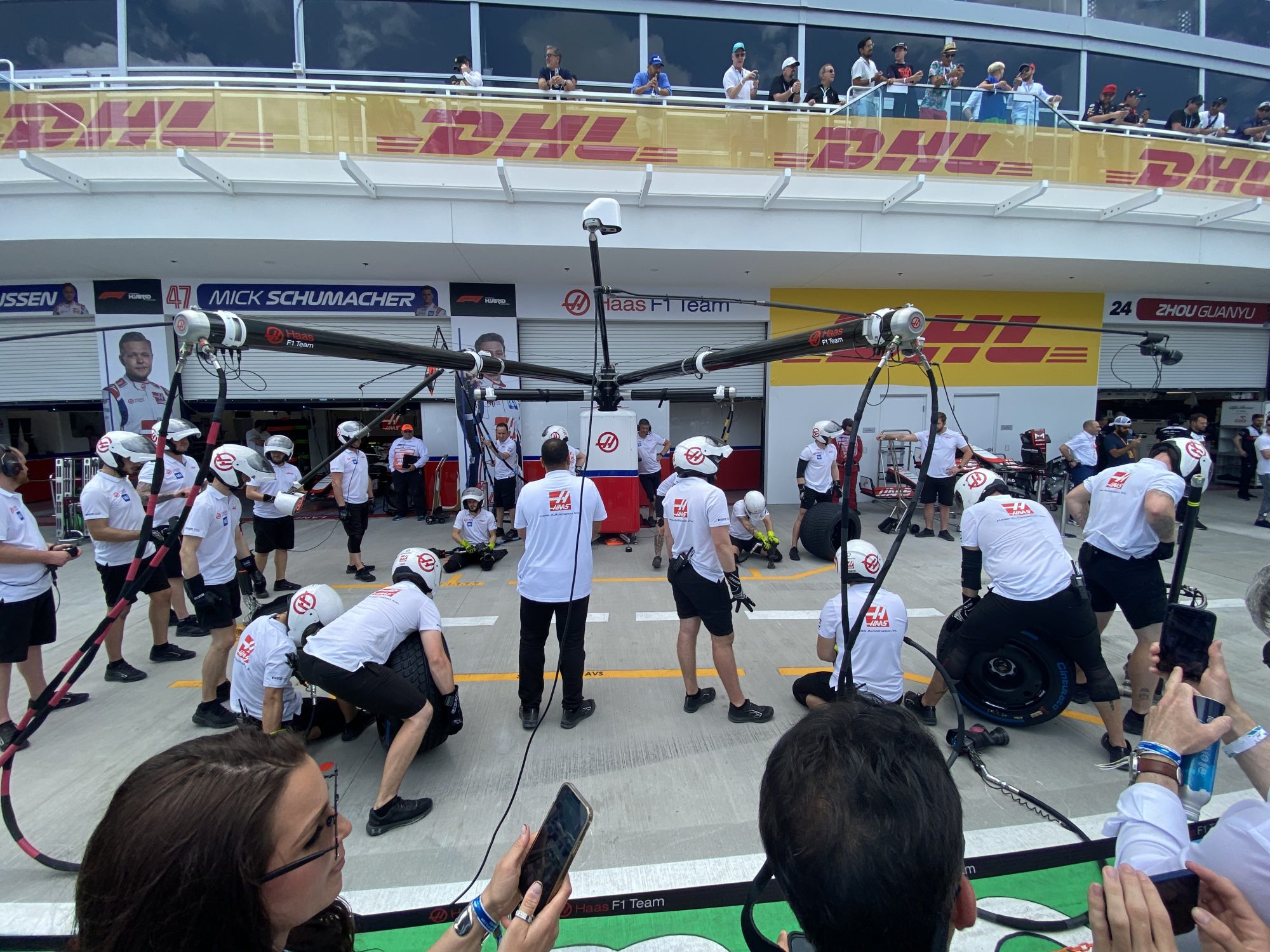 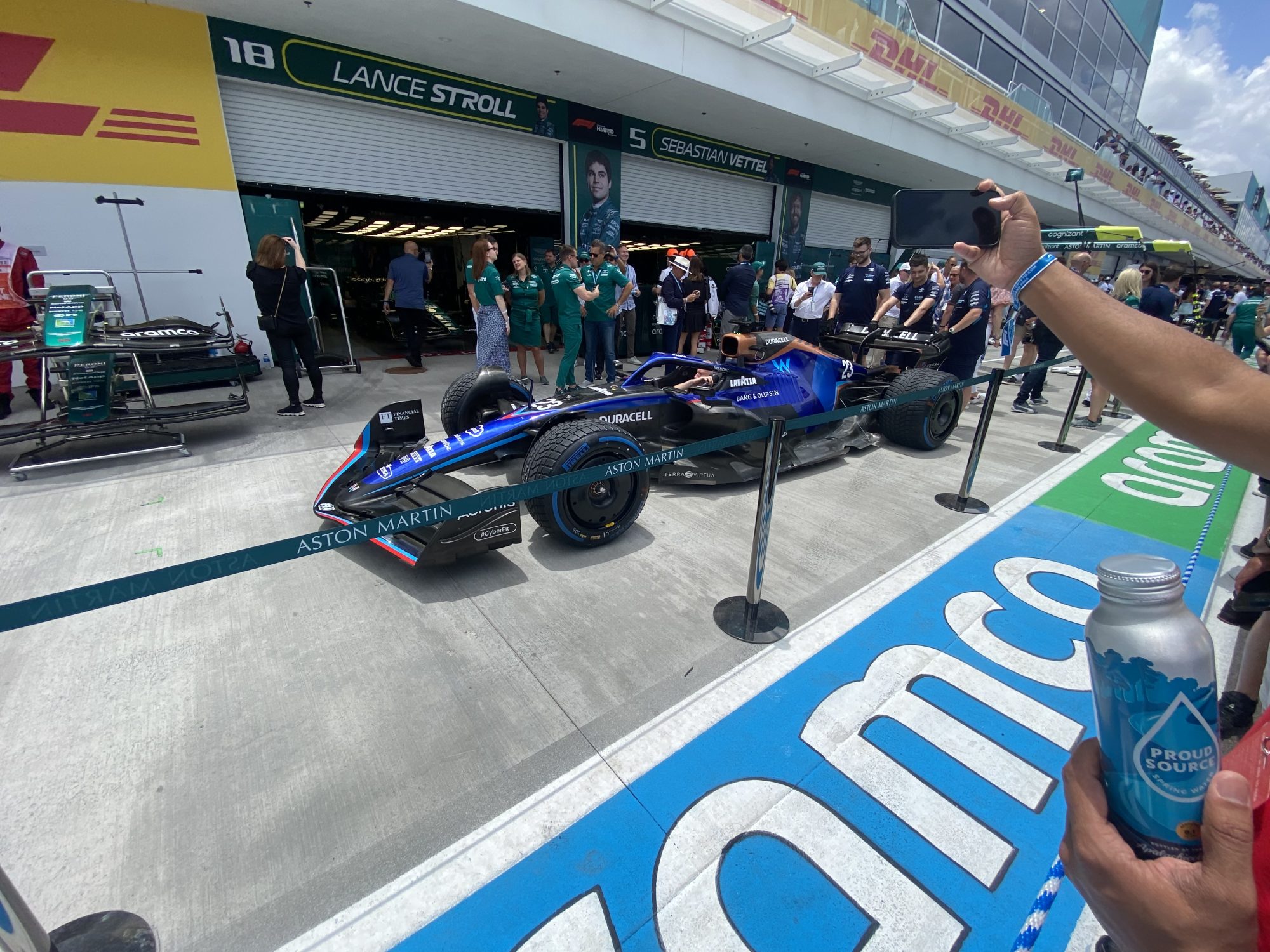 In light of the recent success of the Miami F1, the following New York Times well outlines the future of the Monaco Grand Prix given its rich history and looming contract expiry with Formula 1.

Since the start of the Formula 1 world championship in 1950, the Monaco Grand Prix has stood as one of its most glamorous and famous races.

With roots dating from 1929 and the early days of Grand Prix racing, the streets of the principality have long been Formula 1’s ultimate driving challenge. Off-track, the yachts and parties have made Monaco the place to be seen.

But as Formula 1’s calendar expands to new markets, welcoming dazzling additions such as Miami and, in 2023, Las Vegas, Monaco’s future is suddenly not assured as its contract expires at the end of the year. Formula 1 is also contractually limited to 24 races per season, meaning some events would need to make way for new ones.

“Monaco is definitely a crown jewel, it’s been around for a super long time,” said Zak Brown, the chief executive of McLaren Racing. “They’ve always had a very favorable commercial deal.

Traditionally, Monaco has paid Formula 1 a minimal hosting fee, reportedly about $15 million, largely because of its history and status. These fees can be $60 million per year, which is what Saudi Arabia pays.

Hosting fees provide Formula 1 with revenue that is then paid to teams in prize money, helping fund their racing operations.

Formula 1 and the promoters of the race are still negotiating its contract. Michel Boeri, president of the Automobile Club de Monaco, denied last month that the hosting fees being sought by Formula 1’s owner, Liberty Media Corporation, were too much for Monaco to keep the Grand Prix.

“That’s untrue,” Boeri said. “We are still in talks with them and must now agree on a contract. I can guarantee you that the Grand Prix will keep taking place beyond 2022.”

The consensus from teams is that history alone is not enough of an argument for the hosting fee to be so small, especially when new races and markets, such as South Africa or Asia, are showing interest in joining the Formula 1 calendar and can offer sizable sums.

Christian Horner, the Red Bull team principal, said a new circuit offering the same money as Monaco would “never be accepted onto the calendar.”

The success of Miami’s inaugural Grand Prix this month was a sign of what new Formula 1 events may look like, such as providing weekend-long entertainment with concerts.

It’s not only new tracks that are focusing on the wider event. Despite being a traditional racing circuit built in 1948, Zandvoort in the Netherlands returned to the calendar last year to huge acclaim because of its off-track festivities and electric atmosphere.

Frédéric Vasseur, the team principal of Alfa Romeo, thought Zandvoort marked a “big change” for Formula 1. “All events are going in this direction, and everybody will have to follow the move,” he said. “It’s not just the show, but everything else around the Grand Prix. And I think Monaco will have to do the same.”

The racing in Monaco has also faced scrutiny. The track has been largely unchanged over the past 50 years, yet Formula 1 cars have evolved considerably in that time. The current generation of cars is wider and heavier than ever, making it hard for them to pass one another around the narrow streets. It often leads to boring races.

“I can’t deny that the race is definitely not as exciting as some others,” said the AlphaTauri driver Pierre Gasly of France. “Moving from 1.8-meter-wide [about six feet] cars to two meters, it clearly didn’t help, because you’re increasing like 40 centimeters when you’re side by side.”

Formula 1 said last year that it would evaluate what, if any, changes could be made to the Monaco track to improve the racing. But with the existing buildings and infrastructure, making changes would be difficult, if not impossible. “I’m not too sure they want to move buildings back and things like that,” Gasly said.

Yet the track has its challenges because there is no room for drivers to make mistakes. Last year Charles Leclerc of Ferrari found that out when he crashed at the end of qualifying and damaged his car so badly that he could not take part in the race.

“Monaco is the ultimate challenge to have a street circuit where we are going so fast,” Leclerc said. “There is no time to think because there are no straights, basically. Sure, for overtaking it might not be the most exciting track of the season. But I think as a driver point of view, it’s extremely important to keep it on the calendar.”

The Mercedes driver Lewis Hamilton of England said that although “the racing itself is not that spectacular,” Monaco still has “that icon status” to appeal to fans and drivers. “Everyone that goes enjoys it,” he said. “The history that it has that is so appealing to drivers, but also I think to those that are watching.”

Leclerc said the race was “part of the myth of Formula 1,” but acknowledged his bias. He grew up in Monaco.

“I’m driving on the roads I was taking by bus to go to school when I was a kid,” he said. “So there’s an emotional attachment to it, too. It would be great to stay there.”

Philip Richter is President and co-founder of New-York-City-based Hollow Brook Wealth Management, LLC. The Turtle Garage Blog, he says, is dedicated to his "love of excessive personal transportation."
View all posts by Philip Richter →
The Miles Collier Interview for Sports Car Market
Greenwich Concours, Manero’s, and the Love of the Automobile