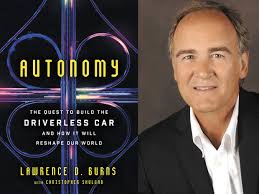 “With his access to so many players including Google founders Larry Page and Sergei Brin, Burns does a masterful job weaving the various strands of his story together.  And a juicy story it is, filled with an insider’s first hand experiences and observations.” —Doron Levin, Forbes

Regular readers of Turtle Garage know that we have been closely following the controversial development of autonomous vehicles. The ramifications of a driverless car put a dagger in the heart of the true automotive enthusiast. The last thing that the owner of the “ultimate driving machine” wants is for a computer to do the driving. What motoring enthusiast would trade a thirsty and rumbling V12 for a whisper-silent electric motor? Who wants to ride-hail a public shared autonomous vehicle when you can have the valet deliver your S-class after dinner at Jean-Georges?

The social, political, and economic implications of the driverless-electric-ride-hailed car are profound. Just the idea of a self-driving car eats at the very soul of the true motoring enthusiast. Let’s face it—many of us just love to drive! However, the reality is that the driverless car is coming, and it is coming faster than many think. Fully autonomous cars won’t happen tomorrow, or even in the next five years. It will evolve. We are seeing it today with products like Tesla’s Autopilot and Mercedes-Benz’s Distronic Plus. However, over the next thirty years, we will experience a transformation that will rival the era when horses got displaced by the Model T.

I currently serve on the advisory board of a leading early-stage venture capital firm based in Palo Alto. OVO Fund successfully backs entrepreneurs in and around Stanford University. OVO’s board is comprised of an interesting group of individuals who all share a passion for emerging technologies. The collective knowledge and experience of the OVO board is broad and deep. Being involved with OVO at this intimate level has opened my eyes to the myriad of technologies that are poised to radically change our lives in the years ahead. Indeed, radical things are happening around Stanford University! At our most recent meeting in New York City, a fellow board member casually recommended a book called Autonomy by Lawrence Burns. So I would not forget the title, I downloaded Autonomy during the post-meeting dinner.

Last weekend I finally hunkered down and listened to Autonomy on Audible. The book is masterfully written and well researched and furthered my conviction that the automobile industry is facing a tsunami of change. Autonomy is a great read for anyone seeking to better understand the background, issues, and complex future of the coming mobility disruption.

The timing for a consumer-ready fully autonomous vehicle remains a topic of lively debate. Thirty years might seem like a reasonable timeline for broad adoption of fully autonomous cars given the long-term social, legal, technological, and economic issues. Ironically, it may not be technology that slows the adoption of the autonomous car. Rather, delays will likely be the result of regulatory red tape and cautious consumer adoption.

As an avid motoring enthusiast it may be heresy to say that by 2050 cars will likely be a thing of the past. Surely the journey to this autonomous future will be a multi-decade transition because ultimate adoption will be fraught with uncertainty and unpredictable bumps in the road. For example, who is liable for an accident with two autonomous cars? Will American citizens give up the freedom (or right?) to drive? One thing is certain—the emergence of the autonomous car will require major changes in how people think about mobility and transportation. Entire industries will have to re-think their business models. Our lives will be forever changed by the coming mobility disruption.

Autonomy is as much a biography of Burns’ fascinating life in the auto industry as it is a primer on the major issues and opportunities that autonomous vehicles present. The two key takeaways of the book relate to cost and safety. Autonomous vehicles have the potential to be far cheaper to operate on a cost-per-mile basis. They also hold the promise of dramatically limiting human error thus saving thousands of lives per year. If the development of autonomous vehicles enables costs to fall and safety to increase, government support and consumer adoption will not be far behind.

From the back cover of Autonomy:

We stand on the brink of a technological revolution. In the near future, most of us will not own automobiles, but will travel instead in driverless electric vehicles summoned at the touch of an app. We will be liberated from driving, so that the time we spend in cars can be put to more productive use. We will prevent more than 90 percent of car crashes, provide freedom of mobility to the elderly and disabled and decrease our dependence on fossil fuels.

Autonomy tells the story of the maverick engineers and computer experts who triggered the revolution. Lawrence D. Burns—longtime adviser to the Google self-driving car project (now Waymo) and former corporate vice president of research, development and planning at General Motors—provides the perfectly timed history of how we arrived at this point, in a character-driven and vivid account of the unlikely thinkers who accomplished what billion-dollar automakers never dared.

Beginning at a 2004 off-road robot race across the Mojave Desert with a million-dollar purse and continuing up to the current stampede to develop driverless technology, Autonomy is a page-turning chronicle of the past, a diagnosis of the present, and a prediction of the future—the ultimate guide to understanding the driverless car and to navigating the revolution it has sparked.

You can also read an interview by Forbes with Lawrence Burns by clicking here.