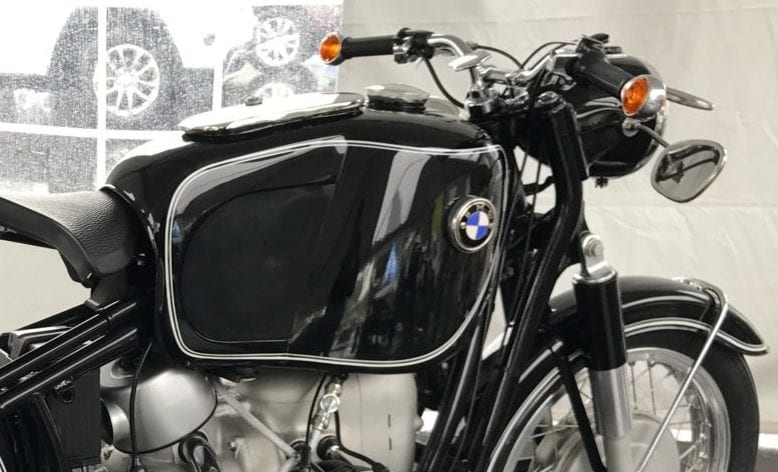 By Philip Richter on September 9, 2017 in History, Motorcycles 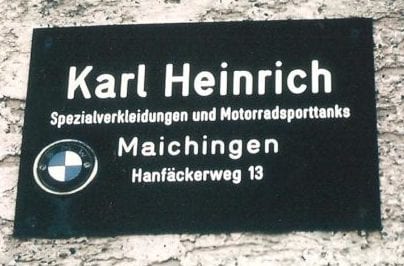 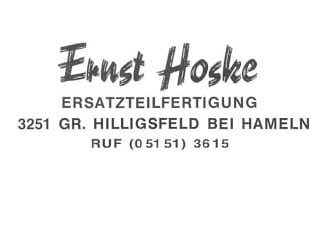 Ernst Hoske and Karl Heinrich are best known for their oversized 8-10 gallon aftermarket fuel tanks that adorned BMW’s in the 1960’s and 1970’s. Very little has been written or documented about the life of these two German artisans. I saw my first Heinrich-equipped BMW when I was about twelve years old. The machine was a black sidecar rig and it was outfitted with an enormous gas tank that looked like a cancerous growth. An oversized Hoske or Heinrich tank is an acquired taste because, at first sight, they seem to distort the elegant lines of a BMW R50, R60/2, or an R69S. But these hand-made works of art have a way of growing on you—They add a really special look to any vintage BMW. They also have a functional side because they provide an extended range between fuel stops.

Fuel tanks that were hand-fabricated by Ernst Hoske and Karl Heinrich are rare and collectible items today. Over the last several years, I have made it a point to acquire any authentic Hoske or Heinrich tank that comes up on eBay or through my vintage BMW motorcycle network. Right now, Turtle Garage has four Hoske tanks of various sizes and styles. For me personally, the angular Hoske tanks are more attractive than the bulbous Heinrich design.

Ernst Hoske was born in Germany in 1921. He was a successful BMW motorcycle racer and rode in the 500cc classes. Later, he opened up a small private shop and started fabricating aftermarket gas tanks, seats, exhaust systems, and miscellaneous racing equipment for BMW motorcycles. Hoske’s workshop was ultimately taken over by Kurt Straubel in 1969. Later, Hoske’s son-in-law inherited the business. Ernst died in 1976. Today the workshop is located in Hameln-Hottenbergsfelda and is a BMW dealer called Fuchs. Reproductions of his famous “Hoske Bags” exhaust pipes are still being produced today. 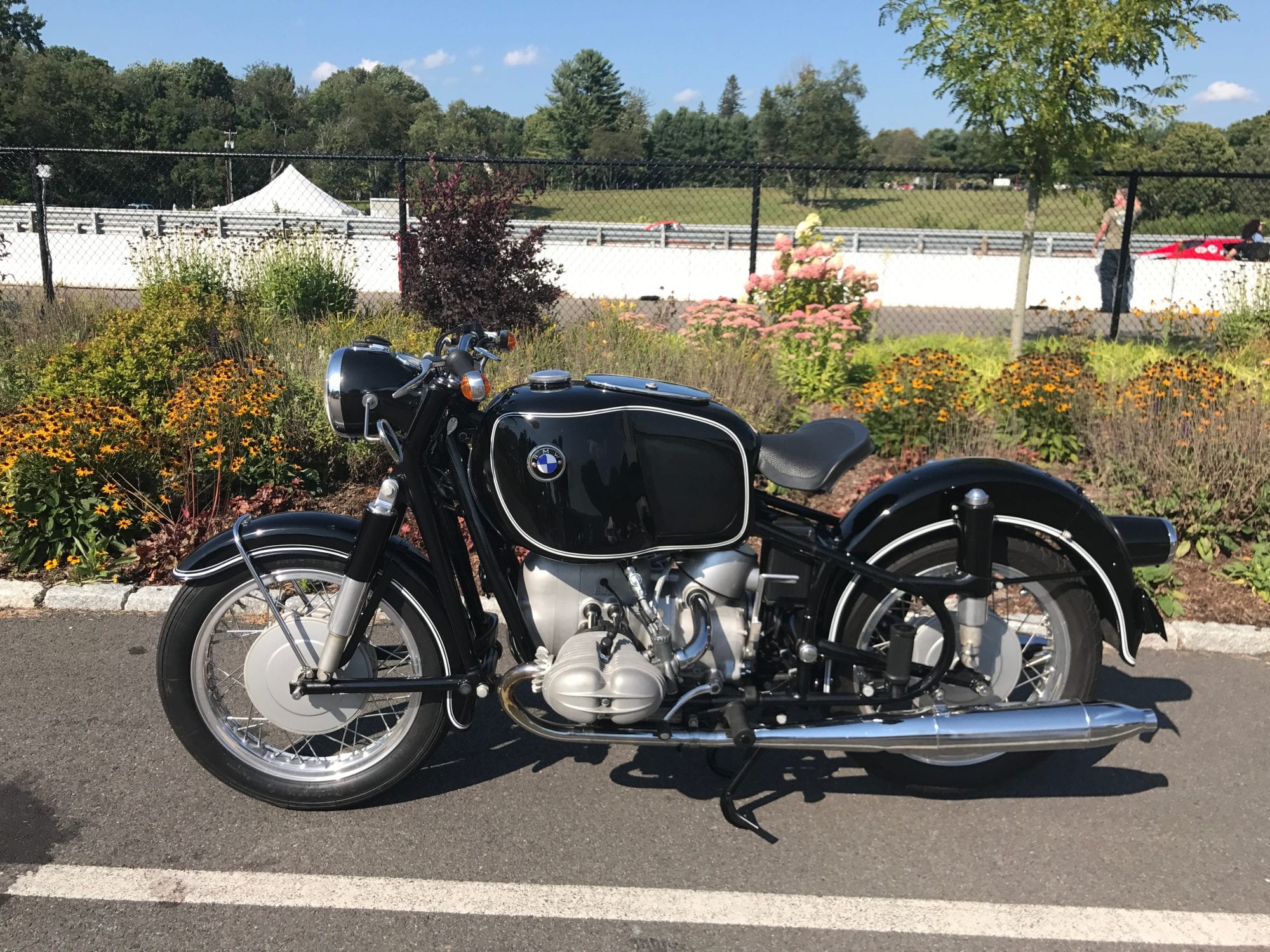 Karl Heinrich also designed oversized BMW fuel tanks and he produced them from the 1960’s through the 1980’s. He created a myriad of different tanks in various sizes. Each tank shares a stylistic resemblance in that they are shaped in a bubble-like fashion. Heinrich tanks usually have a sidecar cut out on the lower right front. 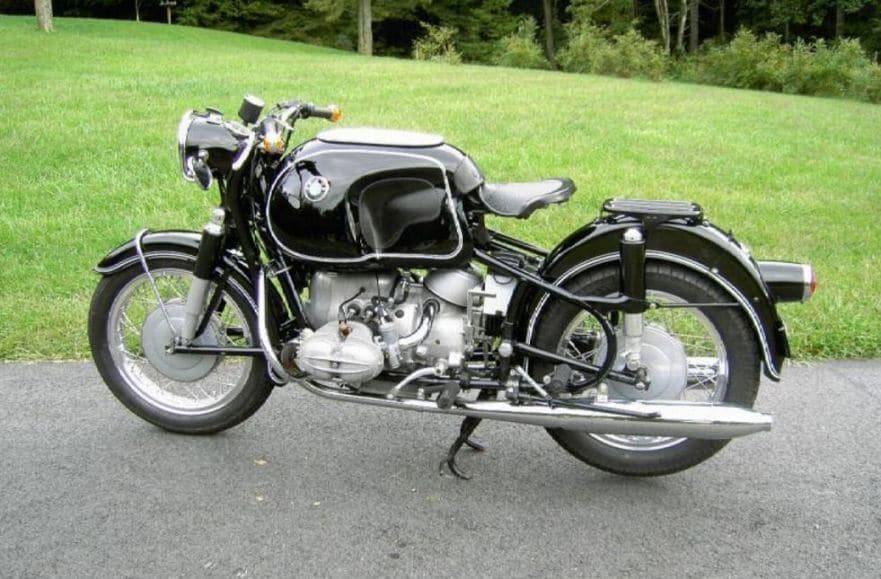 A BMW R69S with a Heinrich tank

I was at Ernst Hoske’s shop on three occasions. The first time was to buy an 8.5 gallon tank for my first bike, a 1965 R60/2. I was blown away by shelf after shelf of hand-made custom tanks to choose from. I returned late in the summer of that year after taking an epic trip through Eastern Europe, Turkey, and Greece.

I inherited some money from my grandfather and I decided to buy an R69S. I faced a tough decision whether to buy the R69S or a Hollandia sidecar for the old R60/2. While I was waiting for my grandfather’s money to arrive from America, I was staying near Ernst’s shop. The money somehow got lost in transit and Ernst gave me some cash to tide me over. I stayed at a local youth hostel called the Pied Piper in nearby Hameln. I spent my days with Hoske until funds arrived. During my stay, Ernst told me several stories about his life. He had been a motorcycle courier during World War II.

Ernst was barrel-chested, and he wore a white shirt & lederhosen. I left the R60/2 with Hoske for service and I rode the R69S to Sweden where I had spent my junior year abroad. I left the R69S in Gothenburg and sailed with a boat load of Saabs to New Haven, Connecticut.  I eventually returned to Germany with Pia Lindquist and retrieved the R60/2. We rode through the night from Hoske’s shop in Gross Hillingsfeld all the way to LeHavre, France. There we boarded the Aurelia, chartered by the National Student Association and returned to the United States. I recall it was only $30 extra to bring the motorcycle on the ship. It was the same price as shipping a bicycle. I rode that very same R60/2 to the Woodstock music festival the following August! I sadly lost track of where those two bikes are today. 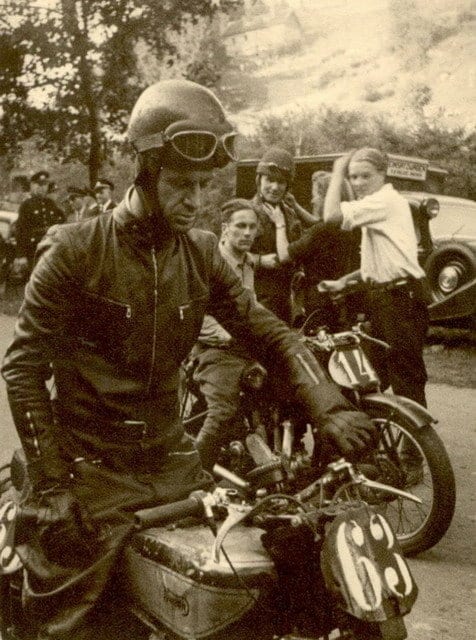 Ernst Hoske during his racing days 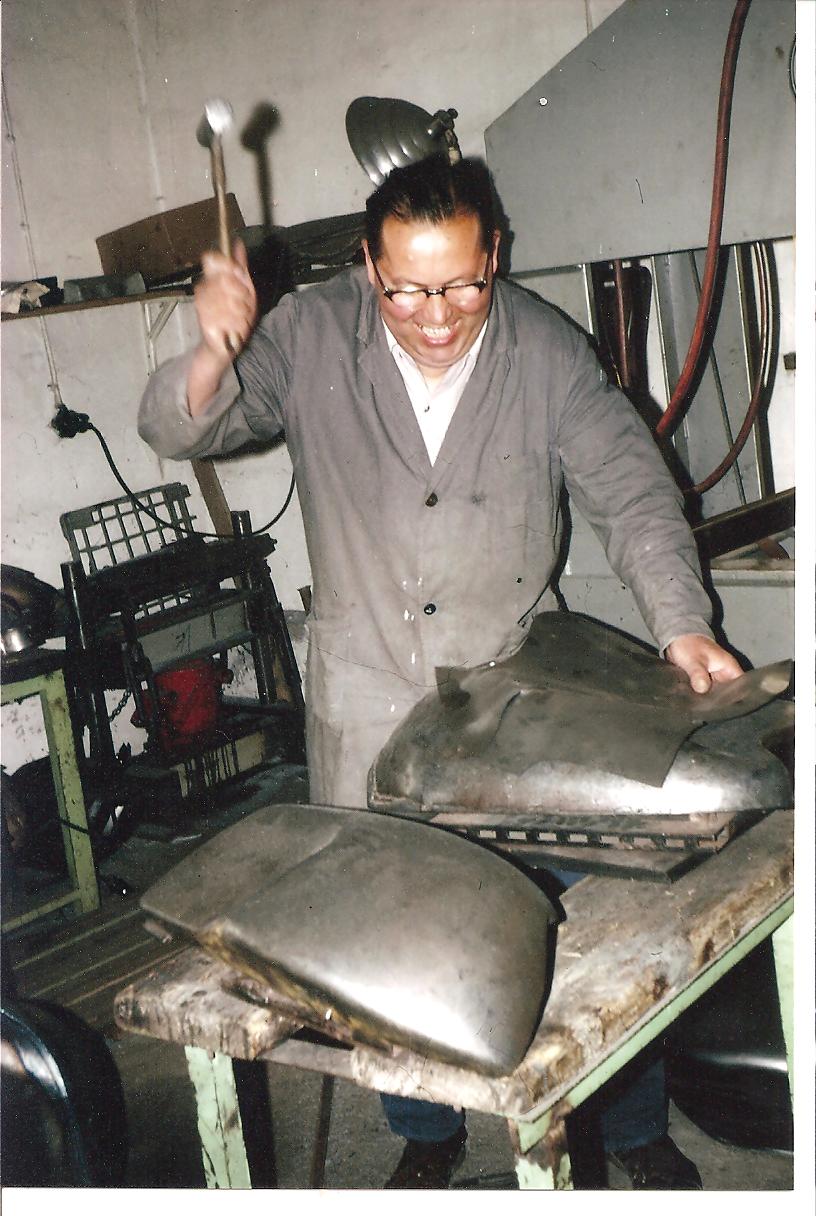 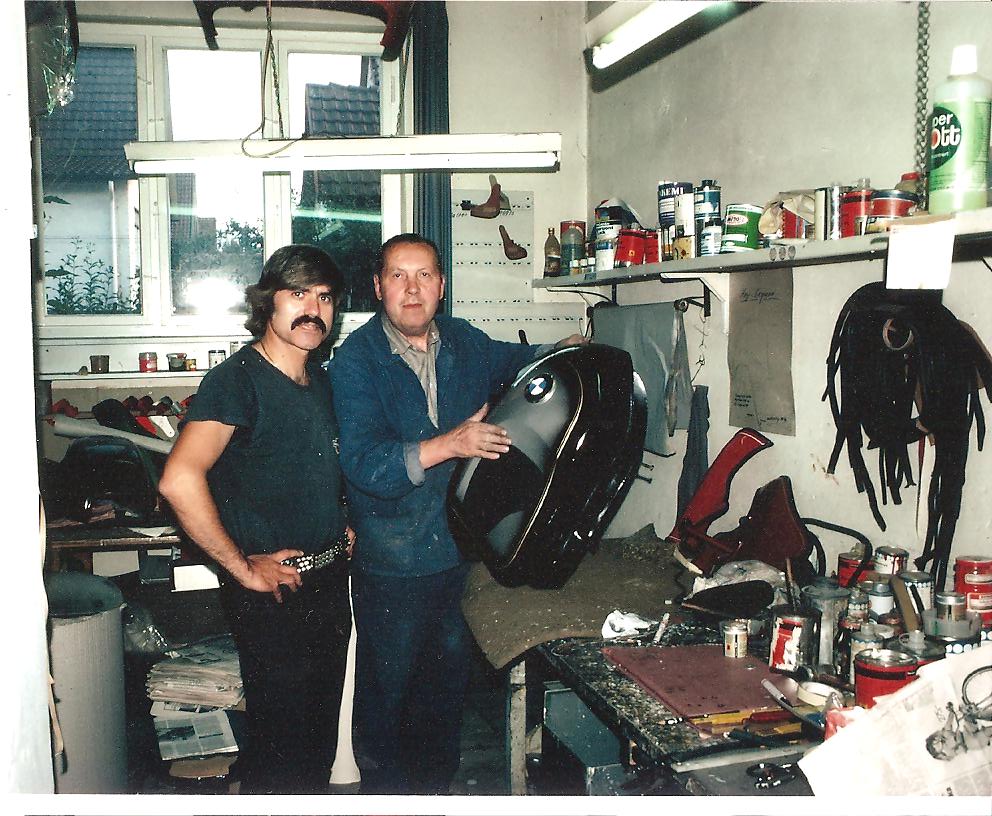 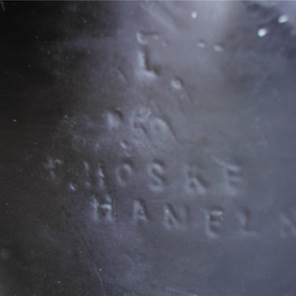 Most authentic Hoske tanks are hand-stamped 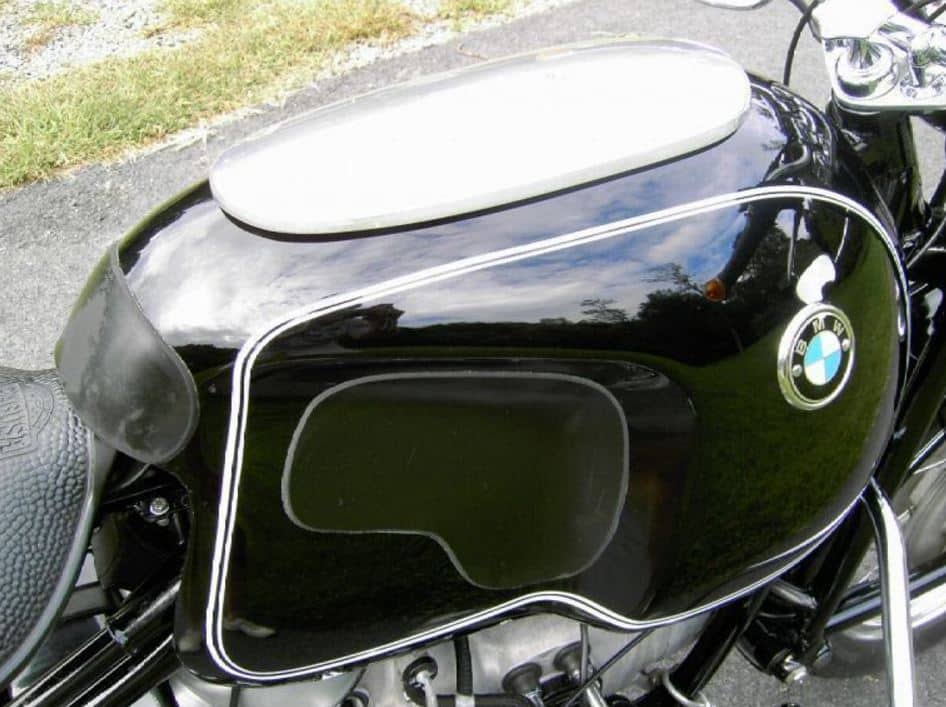 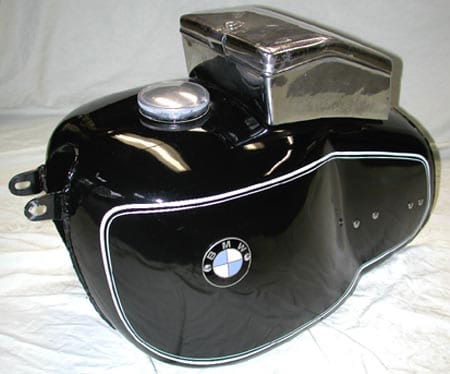 A rare Hoske tank with an external tool box 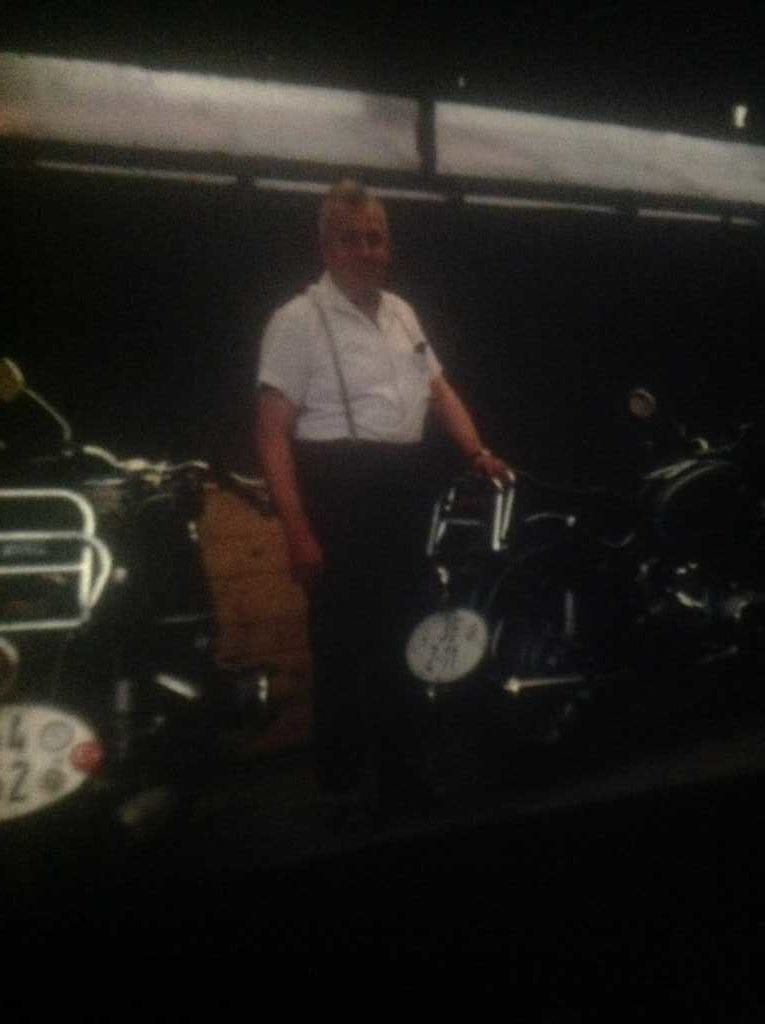 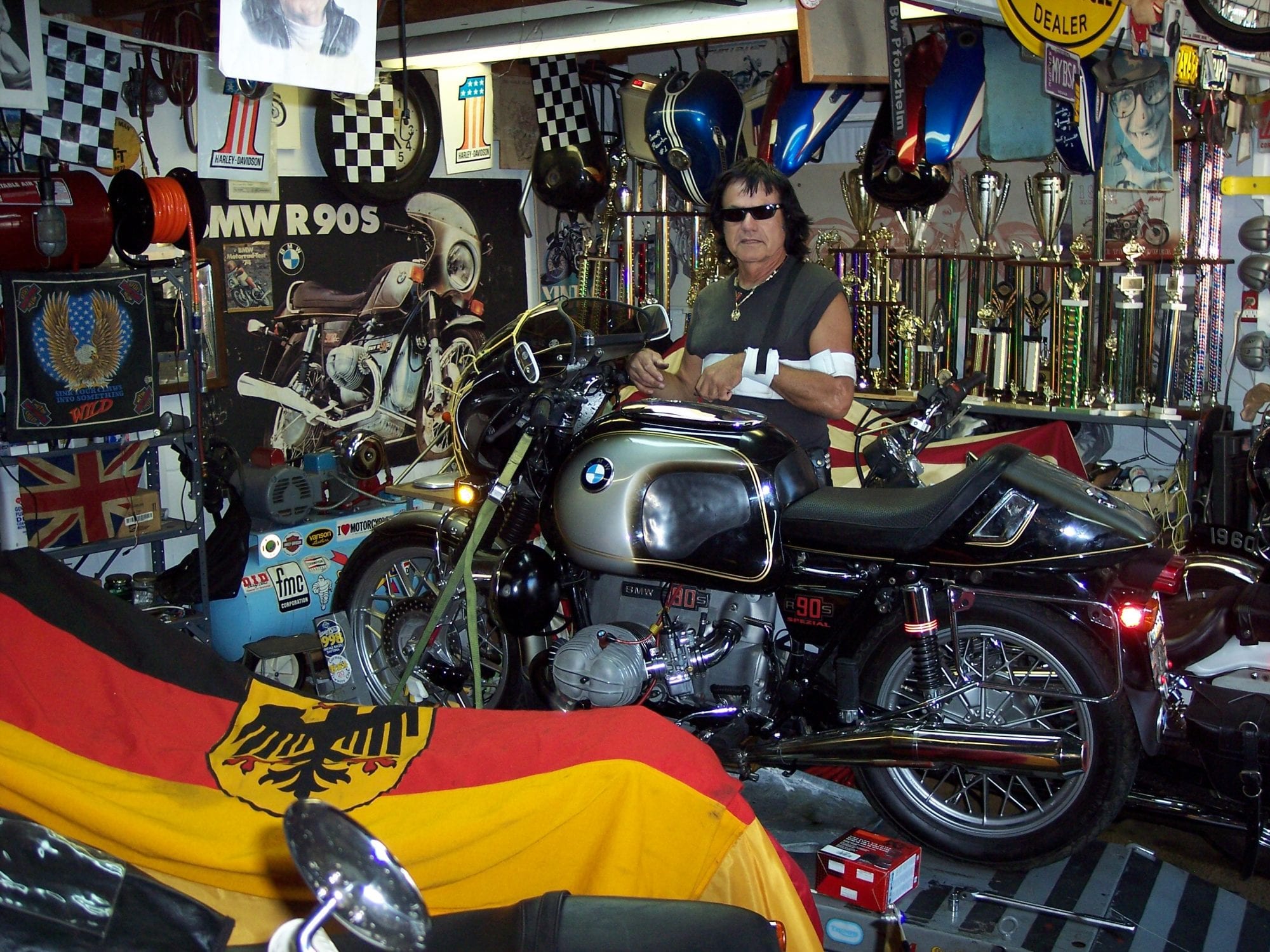 A BMW R90S with a ultra-rare custom Heinrich tank. Karl Duffner from PA, was a friend of Heinrich’s and had Heinrich make him a one-off MASSIVE tank for this R90S (Photo courtesy of Steve Bauer) 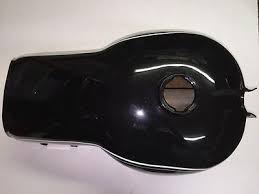 The top view of a Hoske tank 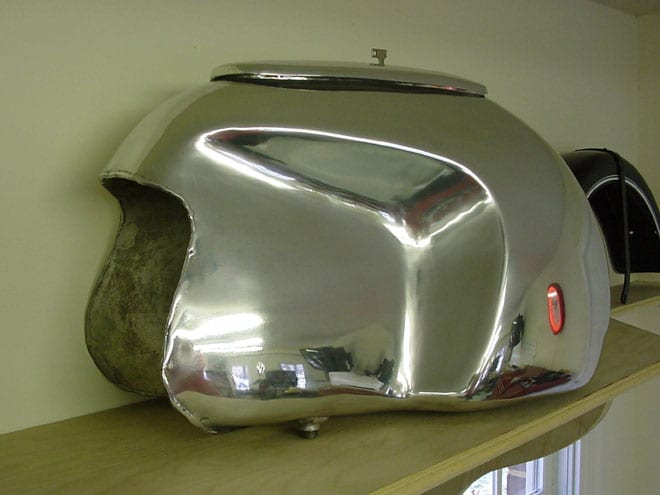 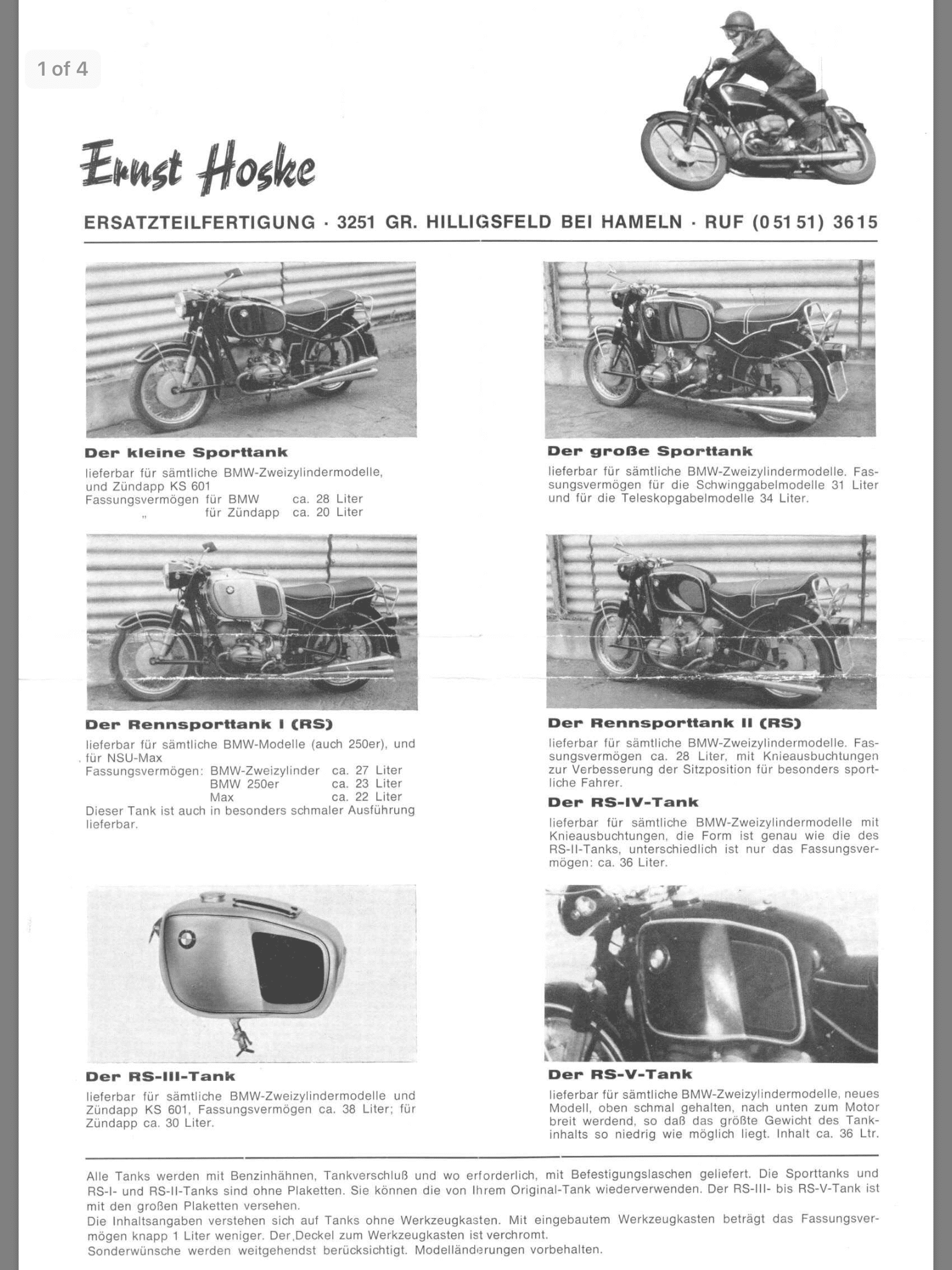 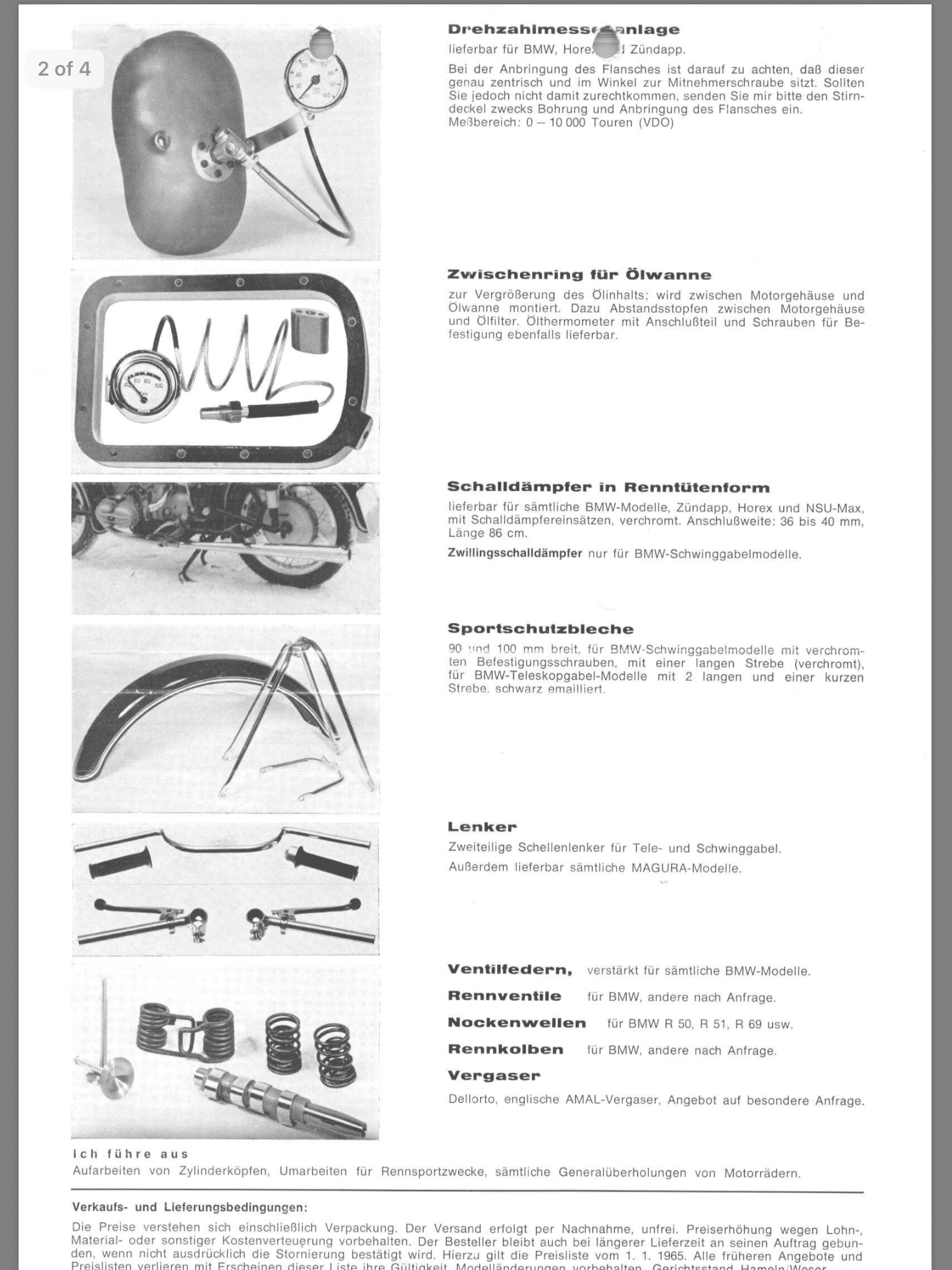 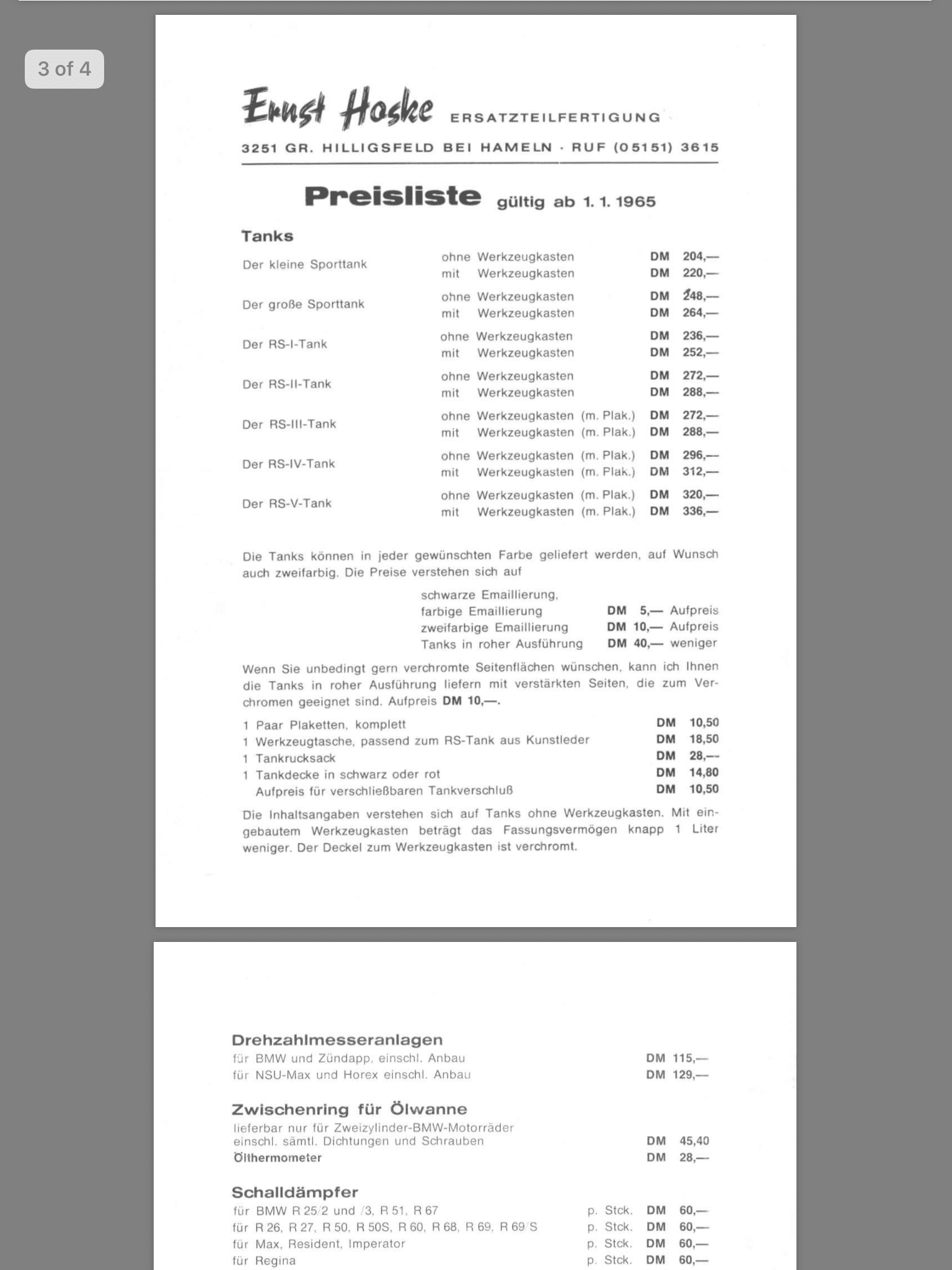