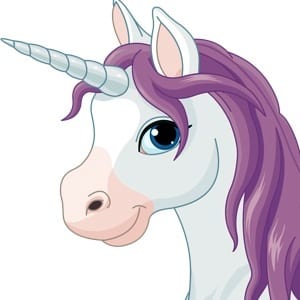 “We are in the middle of a sea change in the collector-car world. In my three decades of publishing Sports Car Market, I have never seen anything like it.” —Keith Martin, Publisher, Sports Car Market

“The determining factor of value for unicorn Youngtimer/NextGen cars is not how many were made, but rather, how many investment-grade examples are left.” —Philip Richter, Founder, Turtle Garage

A few years ago I learned an important lesson about rarity. Sarah and I were treated to a private tour of one of the most exclusive private car collections in North America. When we arrived at the owner’s Connecticut estate, there was a Mercedes 300SL Gullwing parked in front of the car barn. Sarah marveled at its beauty. Sounding like an expert I proudly proclaimed, “That is a 300 SL Gullwing. It’s a rare and beautiful car.” From behind us, a deep and stern voice emerged, “GULLWINGS ARE NOT RARE CARS… ALLOY-BODIED GULLWINGS ARE RARE CARS!” A remedial tutorial on production stats by the owner revealed there were 1,400 300SL Gullwings produced—but only 29 were alloy-bodied cars. At one point, this collector owned two of them! This experience gave me a glimpse into how refined and sophisticated collectors think about rarity. (Featured image by Storynory)

Today, a burgeoning subset of the collector car market is in the midst of a shift away from the traditional definitions of rarity. The emerging Youngtimer/NextGen demographic has embraced a new paradigm that we have coined as Modern Rarity. In the past, desirable cars at the higher end of the market were reserved for vehicles that were legitimately and unquestionably rare—one-off coach-built cars or vehicles that were one of only a handful of production examples. A Ferrari GTO or an alloy-bodied 300SL will always dominate any rarity contest—nobody could argue or dispute the scarcity value of these bespoke cars. However, the collector market is changing and a new and unfamiliar dynamic is driving valuations of Youngtimer/NextGen cars. Modern Rarity has more to do with a lack of surviving investment-grade examples and less to do with ultra-low production volumes or one-off historically significant cars. To be a legitimate big dollar Youngtimer vehicle, a subject car must share attributes with a unicorn. It must have a documented provenance from new. It must be preserved in perfect original condition with ultra-low mileage. These strict requirements leave 99% of surviving Youngtimer/NextGen cars ineligible to command the stratospheric valuations that such unicorns command.

The determining factor of value for unicorn Youngtimer/NextGen cars is not how many were made, but rather, how many investment-grade examples are left. Most BMW E30 M3’s were driven, tracked, and used up. The majority of Mercedes 190E 2.3 16’s ultimately became daily drivers that baked under the hot sun in suburban commuter parking lots. Of the 35,000 A80 Toyota Supras that were built, how many of them have under 5,000 miles today? How many were correctly stored and meticulously maintained and properly preserved? Nobody knows for sure but the market at Amelia Island was telling bidders that the number is decidedly low. Most Supras were driven and heavily modified. These types of cars were owned by a demographic that wanted to drive them, customize them, and enjoy them. The buyer of a Supra in 1994 had no interest in saving the car as an artifact of history for future collectors.

Aside from Modern Rarity, the other potent driver of value for Youngtimer/NextGen cars is the burgeoning demographic that can now afford the cars they dreamed of in their youth. What is occurring in the market today is a simple combination of demographics and economics 101: Too many dollars are chasing too few cars. What we have now is a perfect storm for Youngtimer/NextGen cars. There is a shortage of investment-grade opportunities in this cateogry that are being chased by a large and passionate group of well-heeled buyers. Let the bidding begin! Barring a global economic downturn, the nearly $200,000 paid for the Toyota Supra at Amelia is just the beginning.

The June issue of Sports Car Market devotes several thoughtful pages to the powerful Youngtimer/NextGem trends that noticeably accelerated at Amelia Island. Cars from the 1980s, 1990s, and early 2000s are now raising eyebrows on the auction scene. Five years ago, RM or Gooding would hardly have even accepted a Toyota Supra for consignment—regardless of condition. At Amelia this year, major auction houses offered a menu of rising Youngtimer/NextGen classics including a pristine Nissan 300ZX Twin Turbo, a low-milage Mazda RX-7, and a well-sorted Mercedes-Benz 500E. As more unicorn Youngtimer cars come to market, be prepared to see prices rise as successful young people with deep pockets step up and vigerously wave their paddle. 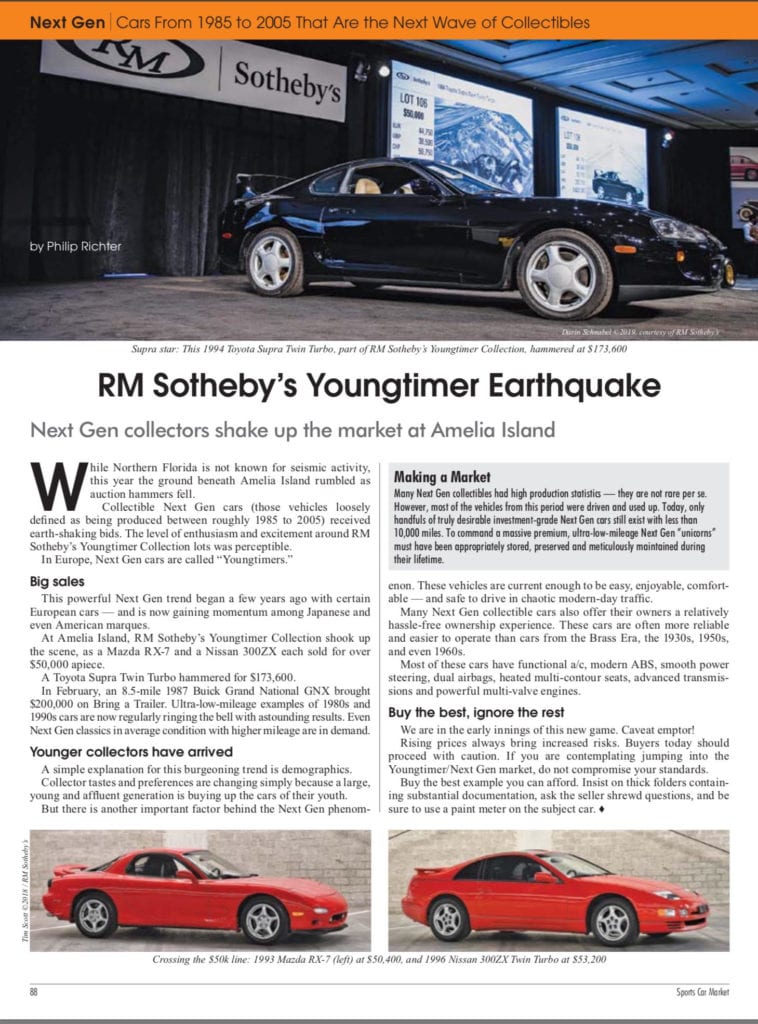 Philip Richter is President and co-founder of New-York-City-based Hollow Brook Wealth Management, LLC. The Turtle Garage Blog, he says, is dedicated to his "love of excessive personal transportation."
View all posts by Philip Richter →
The Big Apple To Adopt Congestion Tolls
Tesla: An Electrifying Month of News