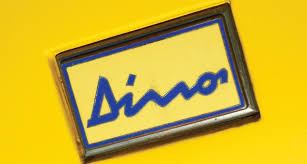 By Philip Richter on November 9, 2020 in Cars, Guest Writer

“Only buy something that you’d be perfectly happy to hold if the market shut down for 10 years.”

One of the best aspects of car collecting and writing a blog is the diverse and wonderful people you meet. At Turtle Garage, we get a lot of inbound emails. Some of the feedback is obscure—last week, a reader was looking for a Hoske gas tank for his 1963 BMW /2. Another reader asked how to source a wood Sportline steering wheel for a Mercedes-Benz 500E. Other inquiries offer content ideas or suggestions on new material to publish. Some emails elaborate on prior posts, offering our team far more in-depth insights into various topics.

Recently, we received an email from Bill Hancock. Bill is a TG subscriber who has an exceptional Dino with a great story—At TG, we love cars with stories. Bill’s story begins in the late 1960s and continues to this day. His is a story about why we should buy what we love and not let the negative opinions of others or the hope of financial gain drive our car purchase decisions. At some level, buying any car is an irrational decision. But on rare occasions, we get lucky, and a passionate decision simultaneously becomes a smart financial one.

The original Dino was a beautiful car from day one. However, it was small and underpowered. For many years it was considered a non-Ferrari—a red-headed stepchild with half the engine of Enzo’s more expensive twelve-cylinder masterpieces. Well, time goes by, and things change. Today an investment-grade Dino commands both respect and a king’s ransom. Read on and enjoy Bill’s story of a car he once only dreamed of owning. 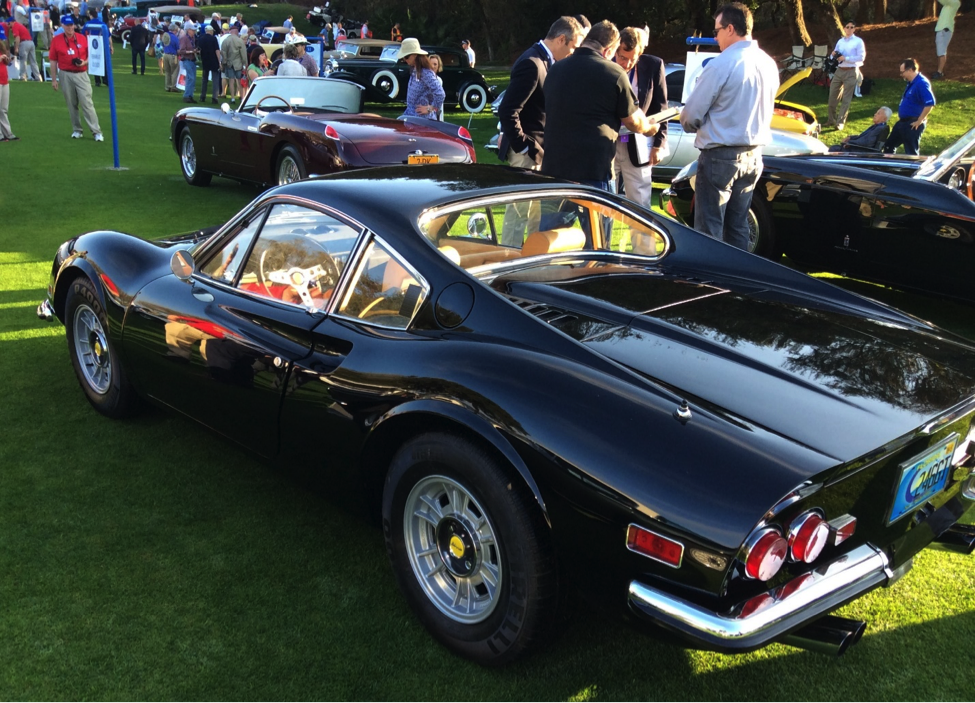 THE TALE OF THE DINO

My love affair with the Dino started in Nashville in the late ’60s when I happened to pass by the local Ferrari dealer and was captivated by a 206 Dino GT. I remarked to my then-roommate that one day I would own one of those, his reply, “Yeah, when pigs fly.”

Ten years later, I happened by a local Ferrari dealer and asked if they ever took in any used Dinos on trade; they replied, “No, nobody wants them.” I left my card in case one showed up. Six months later, I got the call. They were taking a wrecked 246 GT in on a trade. On the appointed day, I showed up, checkbook in hand, and the pigs flew. Later that day, a towing service delivered my “wreck” to a local body shop. The slightly creased passenger door was repaired for a total cost of $300.

Several weeks later, after five new tires and some scheduled maintenance, I took the Dino to an Italian themed car show where I was told to park it with the Fiats. Although the car was titled as a Ferrari and bore the manufacturers’ data plate with only the Ferrari name, Dinos were not considered part of the Ferrari family because they were regarded as “off-brand low-end six-cylinder variants.” Out of curiosity, I started following the asking prices in the Ferrari Market Letter (FML), which has become the leading authority of used Ferrari pricing over the years. I originally bought the car because of its aesthetically pleasing Pininfarina lines, and while not fast by any stretch, it had decent handling and was fun to drive. The Dino never posed much of a threat on the racetrack; however, Jack May did win the famed 1975 Cannonball Run driving a 246 GTS. In so doing, it created a testament to its roadworthiness and dependability.

Enzo Ferrari lived to race. As a former driver himself, he dedicated his early efforts to establishing Scuderia Ferrari as the marque to beat. Initially, he funded his quest by producing a series of fast cars that he sold to a few wealthy amateurs, thus providing the funding to field the Ferrari team driven by some of the world’s leading drivers at the time. This success propelled the Prancing Horse to the top of the sport in post-war Europe. As victories began to mount, so did costs. Soon, the non-linear growth of expenses far exceeded the funding provided by the wealthy privateers. The obvious answer to the company’s survival lay in increasing the volume and finding new markets.

Meanwhile, the Porsche 911 was establishing a new niche and would provide an opportunity for Ferrari to establish an expanded presence in North America. Ferrari began plans for the Dino line named after Enzo’s beloved son. The Dino brand was marketed much like Honda would later do with the Accura NSX. The strikingly beautiful Dino was designed as an entry-level vehicle and positioned at a lower price point than the Ferraris, in hopes the increased volume would provide the needed profits. During that time frame, Ford tried to purchase Ferrari, but the planned buyout failed. Faced with the exponentially rising budget required to remain competitive in F1, Enzo soon turned to the Agnelli Family, scions of the Fiat empire, to negotiate an arranged marriage. Once the marriage was consummated and Ferrari’s financial future was assured, Ferrari’s streetcars’ key components were soon aided by Fiat’s production expertise. Enzo’s prenup agreement assured that he could remain as the head of racing to continue unabated in his enduring quest to stay in the hunt in F1. Production car manufacturing and quality assurance, while remaining in Modena, were being augmented by Fiat.

Despite the diminutive Dino’s attractive styling and layout, its lackluster performance did not resonate with the market. The 246GT was followed by the GTS, which helped but did not meet the necessary sales volume. The Bertone followed the 246 series designed Dino 308 GT4, which failed to gain a foothold in the market.

Meanwhile, in America, the Feds created a complex web of stringent safety and emissions standards that drove up the vehicle unit cost. The manufacturers were all faced with essentially the same costs for compliance testing; however, the low volume manufacturers were faced with amortizing these costs across a much smaller production run.

Unfortunately, the Dino line never achieved the predicted market penetration. Toward the end of 1973, many Ferrari dealers quietly began rebadging the Dinos as Ferraris to augment sales. Some of the dealers merely adorned the rear deck lid with the iconic Ferrari logo. Others mounted the prancing horse on the grille and repositioned the pocket surrounding the Dino badge on the nose to accommodate the classic vertical Ferrari badge. After the short-lived Bertone was designed, the Dino 308 GT4 was dropped. The Dino brand ultimately disappeared entirely. Interestingly, over the years, staunch traditionalists have suggested removing the Ferrari badging, restoring the Dino badge, and restoring the pocket to its original landscape orientation on the affected cars to maintain Dino’s integrity’s DNA. Others view these prior changes done by the dealers as an indelible record of the vehicle’s history, much like a patina. 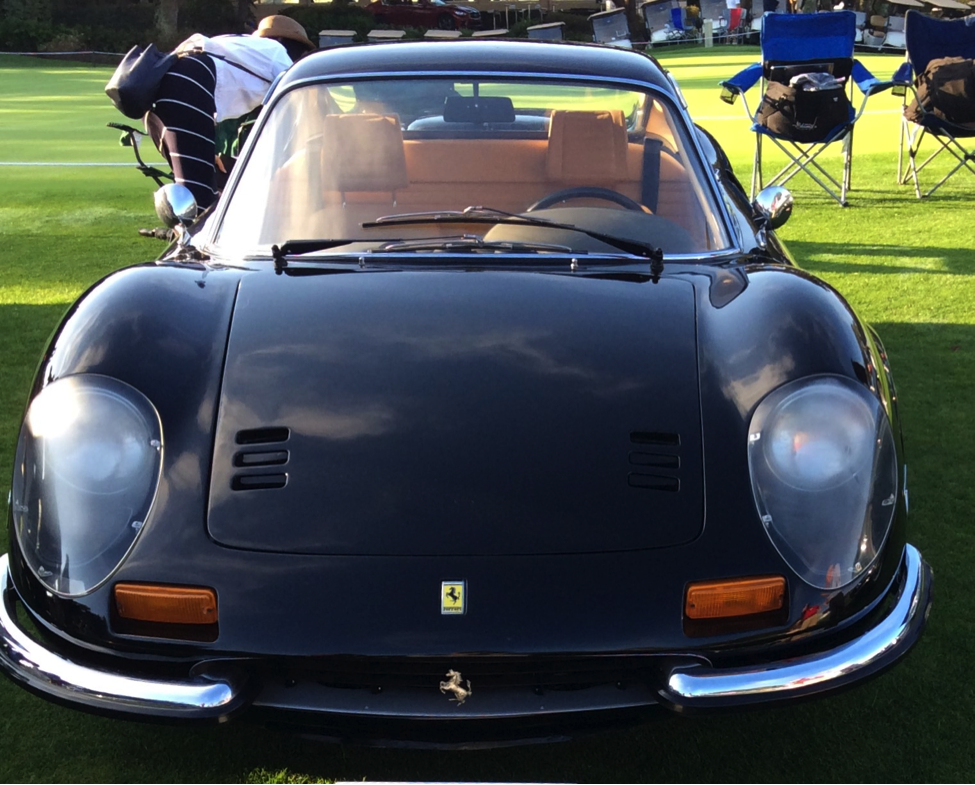 The rebadging consisted of reorienting the front emblem pocket and installing a Ferrari badge, and inserting the Prancing Horse in the grille cavity-Photo courtesy of the Ferrari Market Letter Archives.

In 1974 when the Dino brand disappeared, it was replaced by the Ferrari nameplate, which reappeared on the 308 GTB. That car became an instant hit even though it only had eight cylinders and a transverse engine layout. The 308 GTB and the Ferrari brand went on to gain a huge boost in market awareness and resulting sales volume from the TV show Magnum PI.

After bottoming in the late ’70s, the asking price for Dinos quietly began escalating, and soon the little car with the pretty lines started to attract a loyal following. Slowly the strident V12 crowd mellowed and begrudgingly became slightly more inclusive only after the Asian market became enamored with the car and began to import them. Soon, the Dino slowly started appearing on various lists as desirable. Today, the Dino is widely considered a timeless and beautiful design. When magazines or aficionados list the most beautiful cars in history, the Dino is often featured front and center. Not surprisingly, contemporary automobile designers have often emulated the Dino’s shape and design. Both the Pontiac Fiero and Accura NSX used the Dino as inspiration during their early gestation.

Fast forward to 2014, when (after avoiding car shows for thirty-five years), I arrived at a local car show and was told that they had reserved the featured spot for the Dino among the “other” Ferraris. As Toby Keith would say, “How do Ya’ like me now?”

I did not buy the car in 1979 as an investment. Instead, the purchase scratched an itch and checked off a bucket list item. Shortly after that, the Dino took on special meaning for me. I drove the Dino when I began dating an Italian girl who was an automotive designer. She ultimately became my wife, and we have been married for thirty-five years! After getting married and starting a business, the car got parked in our garage for decades while we pursued our careers, raised a family, and went about our daily lives. Today in our car collection, the Dino is the ballet dancer; driven sparingly, but when I slide deep into the seat and peek out over those beautiful rounded front fenders, I still feel the magic. Fast, No; Sexy-Oh Hell Yes!

History and looks aside; let’s look at the financial part of the equation. Having owned the Dino for 41 years, I find its price path fascinating when compared to two other mid-engine Ferraris from the same era. Attached is a graph of the annual asking prices for the Dino, as reported in FML. With no way of knowing the final transfer price, FML’s annual asking price tabulations provided an easily accessible and consistent way to delineate values and market trends. It is interesting is to compare the Dino prices to values for the 308 GTB, and the 512 BB—both of which followed the Dino and were of the same mid- engine layout but lacked the non-Ferrari stigma.

The attached graph tells an interesting story about Dino pricing. In short, when compared to its sanctified peers, it started at the bottom and over the past 40 years has quietly risen to become quite a worthwhile and rewarding investment. 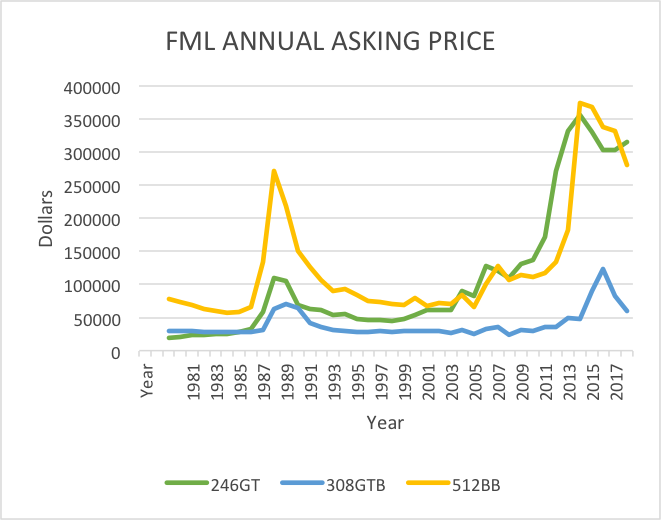 6 Responses to The Tale of the Dino