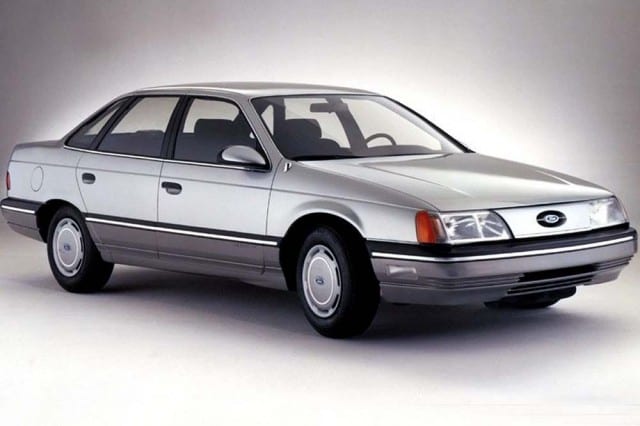 “We’re going to feed the healthy parts of our business, and deal decisively with the parts that destroy value.” —Ford CEO James Hackett

“Everything will be on the table. We can make different investments, we can partner, we can exit products, markets — and we will do that.” —Ford CFO Bob Shanks

“After 20 years and sales of nearly 7 million cars, Ford has announced that it will no longer make the Taurus, forcing many 30-somethings to find a new way to show the world they have given up on life.” —Seth Meyers, Saturday Night Live, Season 32 Episode 3, 2007 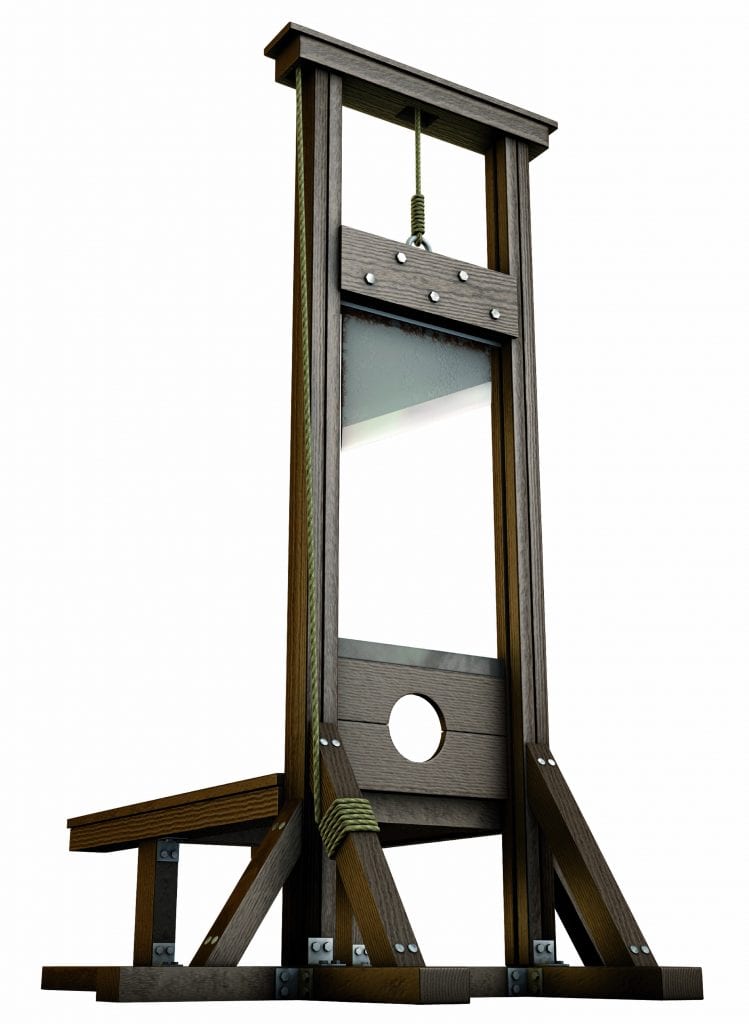 The Ford Taurus gets the Guillotine.

Ford is at war. In a bold strategic move, the Company is abandoning slow-selling, low-margin passenger cars and will focus only on high-margin SUV’s and pickup trucks. This aggressive cost-cutting plan is a response to gut-wrenching changes confronting the industry. Chrysler’s focus on higher margin vehicles has paid off and put the heat on Ford to compete. Recently, Chryslers ‘s profitability has exceeded Ford’s in North America. Ford is also responding to surging crossover sales at GM. Consumer tastes are rapidly changing—Ford is adjusting.

Ford will continue to produce the iconic Mustang sports car and will release an all-new Focus Active crossover next year. By 2020, Ford’s management is forecasting that over 90% of the vehicles that Ford sells in the United States will be higher margin trucks, crossovers, and commercial vehicles. News of this shocking announcement sent Ford’s stock price up 2.6%. Management also indicated their goal is an 8% profit margin by 2020.

This announcement is yet another clear signal that automakers are prepared to do whatever it takes to compete (and stay relevant) in an industry that is being ravaged by radical change. Competition is fierce, margins are skinny, and the industry is struggling to adapt to a future that could include ride-hailing, electrification, and autonomous driving.

In the auto industry, we are only in the second inning of a very long game. There will be many winners and losers, and it will be a bumpy ride—buckle up!

The Model T, the ’32 deuce coupe, the Thunderbird, the Mustang: For much of its 115-year history, Ford Motor Co. has been synonymous with cars. But now Ford, one of the great engines of 20th Century American industry, is about to do the unthinkable: abandon the American car business almost entirely.

Just two years from now, a mere 10 percent of the vehicles rolling off Ford assembly lines and into North American showrooms will be sedans and sports cars like the Taurus or Mustang. The rest will be pickups, SUVs and commercial vehicles — more lucrative models that the company hopes will secure its future as change tears through the global auto industry.

What would Henry Ford think? What might seem like a radical departure for Ford has, in fact, been years in the making. The fuel-price shock that left Detroit on its knees during the Great Recession didn’t last, and American consumers have gone right back to buying sport utility vehicles and big trucks like the bread-and-butter F-Series.

Ford’s board ousted its chief executive officer last year and replaced him with Jim Hackett, a cost-cutter who’s prepared to make the sort of audacious gambles that Wall Street thinks have been missing.

“The passenger car rationalization plan is just the sort of bold and decisive action we believe investors have been waiting for,” Ryan Brinkman, an auto analyst at JPMorgan Chase & Co. wrote in a report Thursday. “It is indicative of a management team for whom there are no sacred cows and which seems increasingly likely to pull other such levers to aggressively improve earnings and shareholder value.”

Hackett, 63, is choosing a route similar to the one Fiat Chrysler Automobiles NV used to pass Ford in North American profitability. Sergio Marchionne, CEO of the Italian-American automaker, killed off the Dodge Dart and Chrysler 200 sedans and retooled the factories that had been assembling them. They now build Jeep SUVs and Ram pickups instead. Marchionne aims to surpass General Motors Co.’s margins in North America before his retirement in 2019.

While scrapping several sedans paid off for Fiat Chrysler — the company almost halved net industrial debt in the first quarter — the move wasn’t devoid of risk and won’t be for Ford, either. Both may have to count on fuel staying cheap and supporting demand for Ford Expeditions and Jeep Wrangler SUVs, plus the F-Series and Ram truck lines.

Ford is confident its new lineup will be able withstand rising gasoline prices, Jim Farley, president of global markets, said in an interview.

“We feel comfortable this new lineup will offer customers world-class fuel economy,” he said. “In the past, the fuel economy gap — the penalty people paid for that utility body style — was pretty high. Now it’s very modest.”

In the long-term, abandoning car segments may turn out to have been the wrong move if the Trump administration’s plans for weaker mileage standards don’t last long after his presidency. And Japanese automakers also are likely to welcome less competition for some of their best-sellers, including the Toyota Camry and Honda Civic.

“For Ford, doubling down on trucks and SUVs could be just what the brand needs,” Jessica Caldwell, an analyst for Edmunds.com, said in an email. “But this move isn’t without risk: Ford is willingly alienating its car owners and conceding market share.”

A Shortcut to Better Margins

By not investing in next generations of any car for North America except the Mustang, Ford now anticipates it’ll reach an 8 percent profit margin by 2020, two years ahead of schedule. Abstaining from that spending is part of Hackett’s plan to cut $25.5 billion in costs by 2022. That figure, announced Wednesday, is almost double what the CEO laid out in October.

“We’re going to feed the healthy part of our business and deal decisively with areas that destroy value,” Hackett said on an earnings call Wednesday.

While battery-powered vehicles have been money losers thus far, Ford’s plans aren’t completely inconsistent with the global march toward electrification that’s shaking up the auto industry.

Ford will hedge against risk of rising pump prices by spending $11 billion to bring out 40 electrified vehicles by 2022. Among those will be 16 battery-only models, including the Mach 1, a high-performance electric SUV coming in 2020.

The company will expand its offering of crossovers, with vehicles such as the Focus Active coming next year that combine the high-riding attributes of an SUV with lighter-weight car frames to improve fuel economy over traditional big rigs.

Crossovers “are attractive to car owners because they get similar if not better fuel economy as we bring in new technology,” Farley said. “They just have different imagery and they give people that utility experience of higher ride height and more interior room.”

Ford has not yet determined if its will offer a crossover version of the mid-size Fusion sedan, as it’s doing with the Focus compact, Farley said.

All on the Table

The Mustang will be all that’s spared from Ford’s slashing of its passenger-car lineup in North America. That means the end of the road for slow-sellers such as the Taurus and Fiesta. The automaker conspicuously left Lincoln’s Continental and MKZ sedans off its hit list, but since those models share mechanical foundations with Ford siblings, their futures also are in doubt.

“This is going to be disappointing to a lot of people who see the end of an era, but most of those people are over 50,” said John Wolkonowicz, an automotive historian and former Ford product planner. “This is about making money. This is what Wall Street demanded.”

It’s also likely not the end of the dramatic moves coming out of Ford as Hackett seeks to reverse the company’s fortunes.

“Everything will be on the table” to fix the automaker, CFO Bob Shanks told reporters Wednesday at the company’s headquarters in Dearborn. “We can make different investments, we can partner, we can exit products, markets — and we will do that.”

Philip Richter is President and co-founder of New-York-City-based Hollow Brook Wealth Management, LLC. The Turtle Garage Blog, he says, is dedicated to his "love of excessive personal transportation."
View all posts by Philip Richter →
Sports Car Market: The Dallara Stradale is an Instant Classic
Attention K-Mart Shoppers: The Mercedes-Benz R230 SL55 AMG is a Bargain Supercar

5 Responses to The Automobile Tsunami Has Only Just Begun: Ford to Stop Making Passenger Cars!