“Many vehicles are billed as ‘speedsters’ or ‘racers,’ but the Duesenberg SSJ really was.  Peaking at 140mph in 1935, it was simply an unbeatable performer, matched by unbeatable style.” —Miles Collier

“This incredible car embodies everything that is exciting about an automotive masterpiece: beauty, rarity, provenance, and sheer power. This SSJ is one of the all-time greatest classics and is poised to set an auction record for a pre-war American car.” —David Gooding, Founder and President of Gooding & Company

I first fell in love with Miles Collier’s Duesenberg SSJ chassis # J-563 when I was at the Revs Institute Symposium back in March of 2017. Miles and Parker Collier’s Revs Institute is full of cars that pull at your heartstrings: Silver Arrows from the 30’s, rare coach-built Packards, LeMans winning Porsches, and of course a gaggle of irreplaceable race-pedigree Ferraris. But there is something about the Gary Cooper Duesenberg that eclipses all other classic cars from the pre-war era.

To say the car is breathtaking is a gross understatement. The Collier SSJ is a car that must be experienced in person to appreciate the full impact of its beauty. The perfect proportions of this hulking car appear massive, yet its stunning lines somehow evoke feelings of nimble athleticism. The Collier Duesenberg is a machine that commands attention, respect, and admiration. It is one of only two Duesenberg speedsters built on a short wheelbase. The unforgettable coachwork by LaGrande is painted in two-tone grey livery that emits an aura of soothing sophistication and modernity.

This ultra-rare Duesenberg is being sold via Gooding & Co. by the Collier family. Proceeds will provide funding for a new non-profit initiative that intends to carry on the cultural legacy of the automobile to future generations. This exciting initiative is being called Revs 2.0 and will continue the Collier automotive legacy long into the future.

“As a collectible object, the Gary Cooper Duesenberg SSJ checks the box for every attribute of value. It is rare, being one of two built and two surviving. It has historical importance, with rare attributes including style, short wheelbase, and performance specifications unique to the two SSJs. It has pristine provenance, with a famous original owner, fully known history, and each owner since the early 1940s (John Troka, D. Cameron Peck, Briggs Cunningham, and Miles Collier) being highly respected. Additionally, its condition and authenticity are exceptional, with the car having never been derelict or mistreated, and retaining all of its original major components.

As a collector car, the Gary Cooper Duesenberg SSJ ranks as one of the top handful of Duesenberg Model Js in existence, which places it at the pinnacle of prewar American Classics, and amongst the stratosphere of prewar Classics from around the world. Neither of the SSJ Duesenbergs has been available at any price, making the offering of this car truly a once-in-a-generation opportunity.”

Now we need to come up with $10 to $12 million to win the final bid at Monterey. 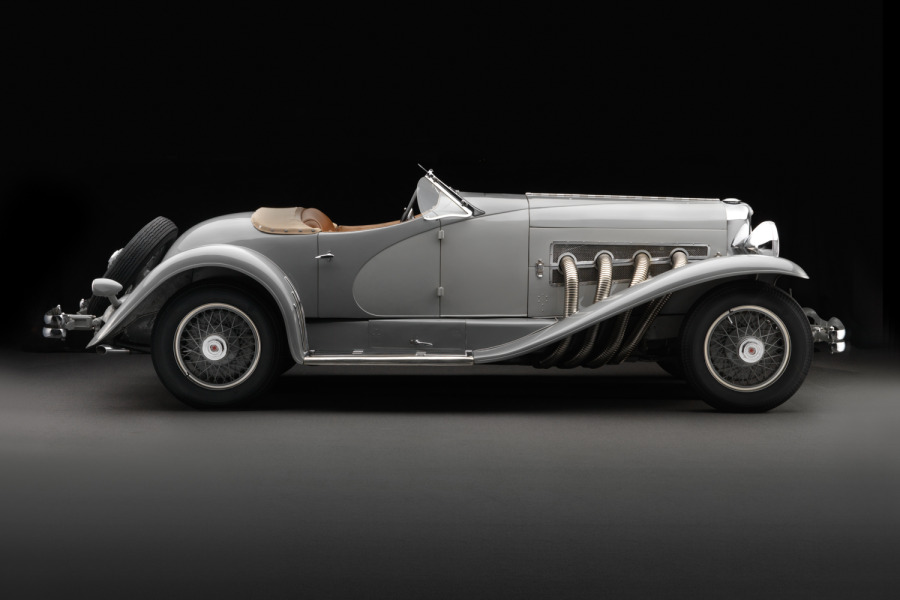 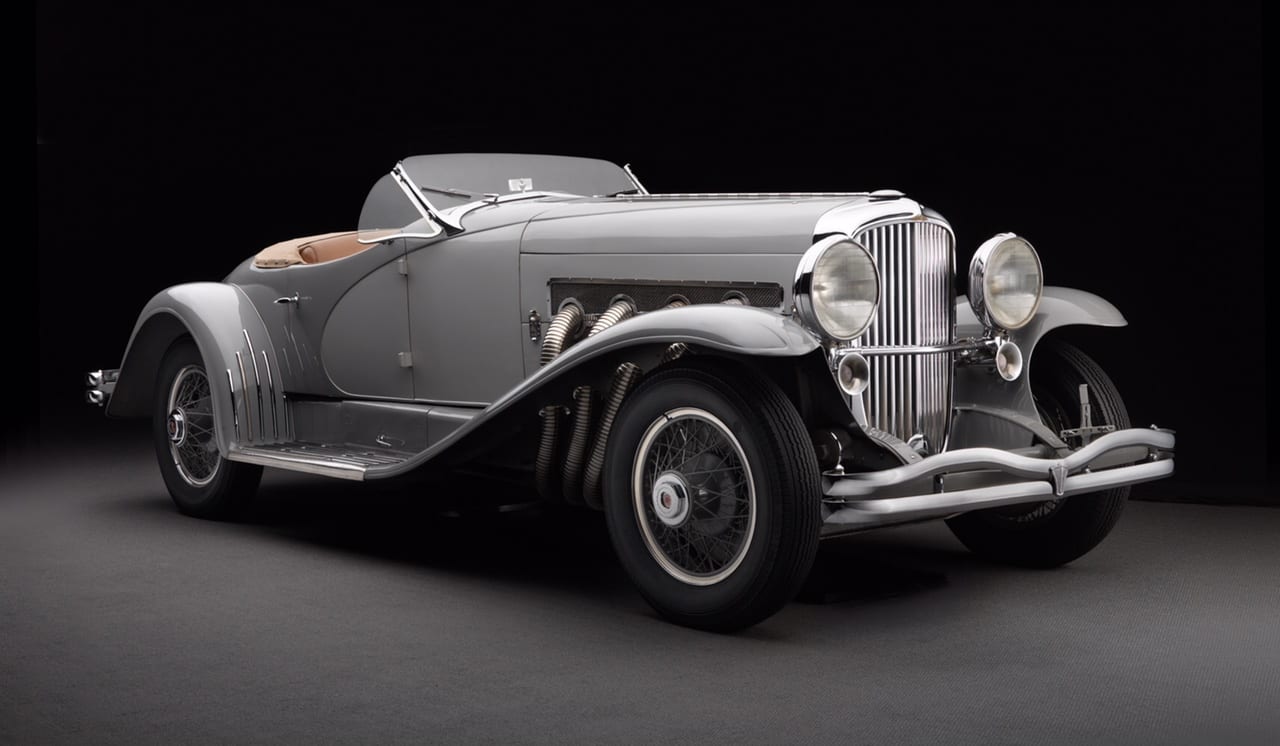 Nothing can compare….(Photo courtesy of the Revs Institute) 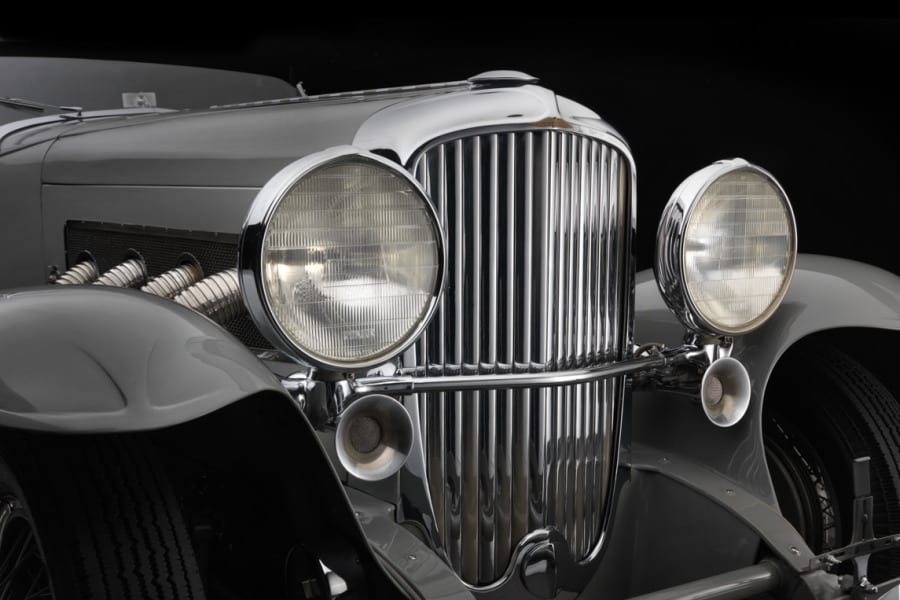 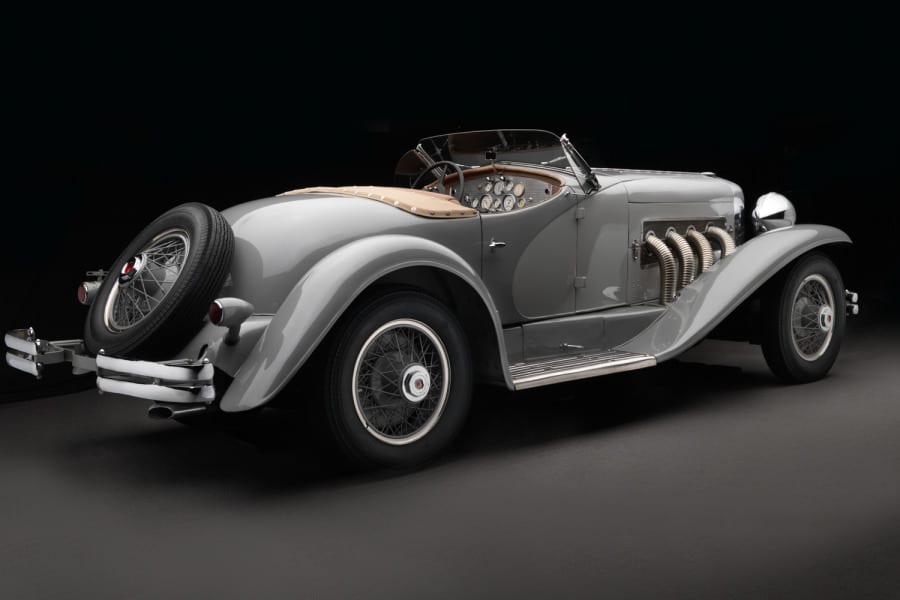 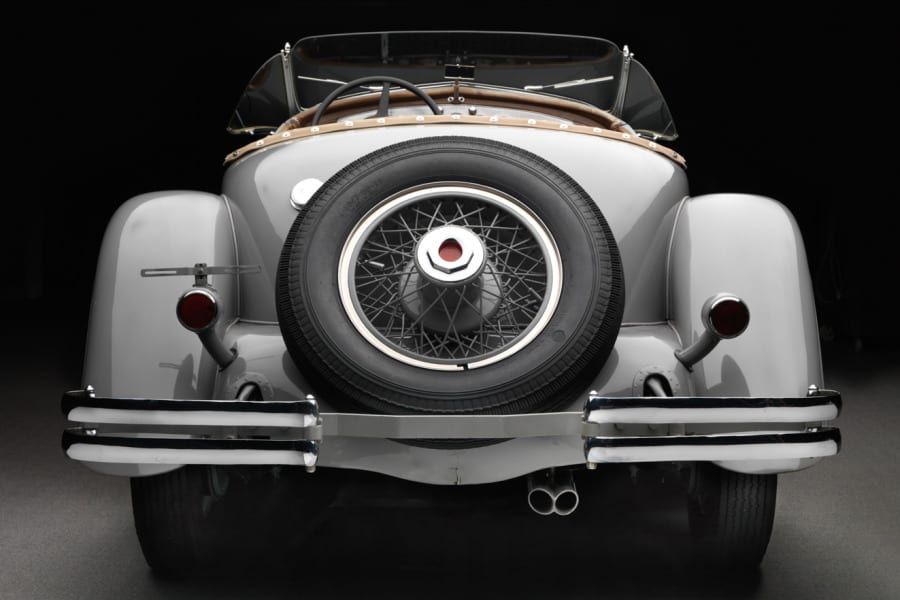 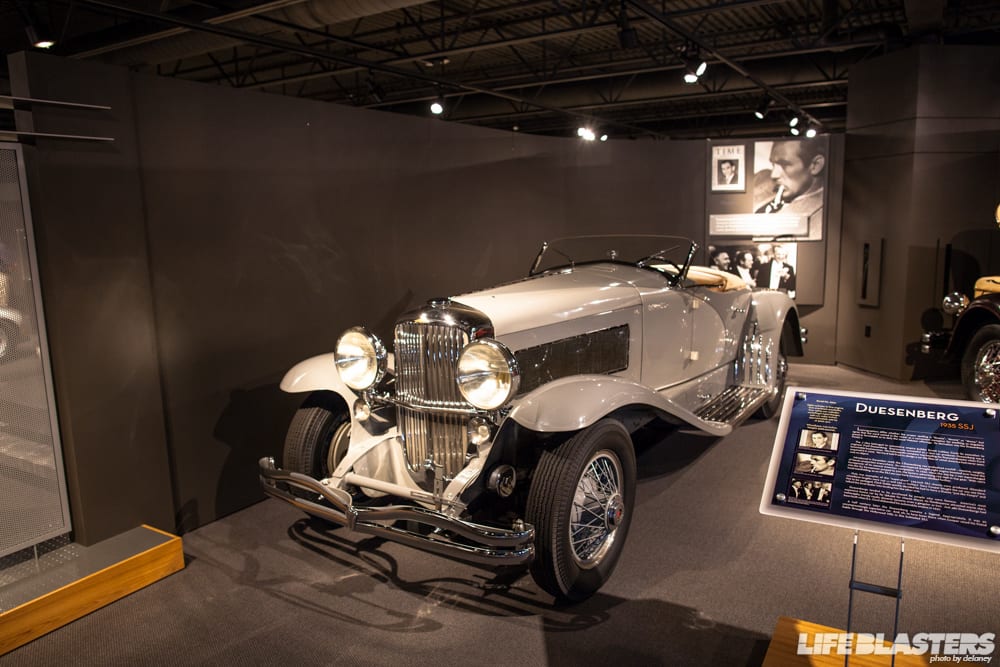 I took his photograph when I was at the Revs Institute in 2017. 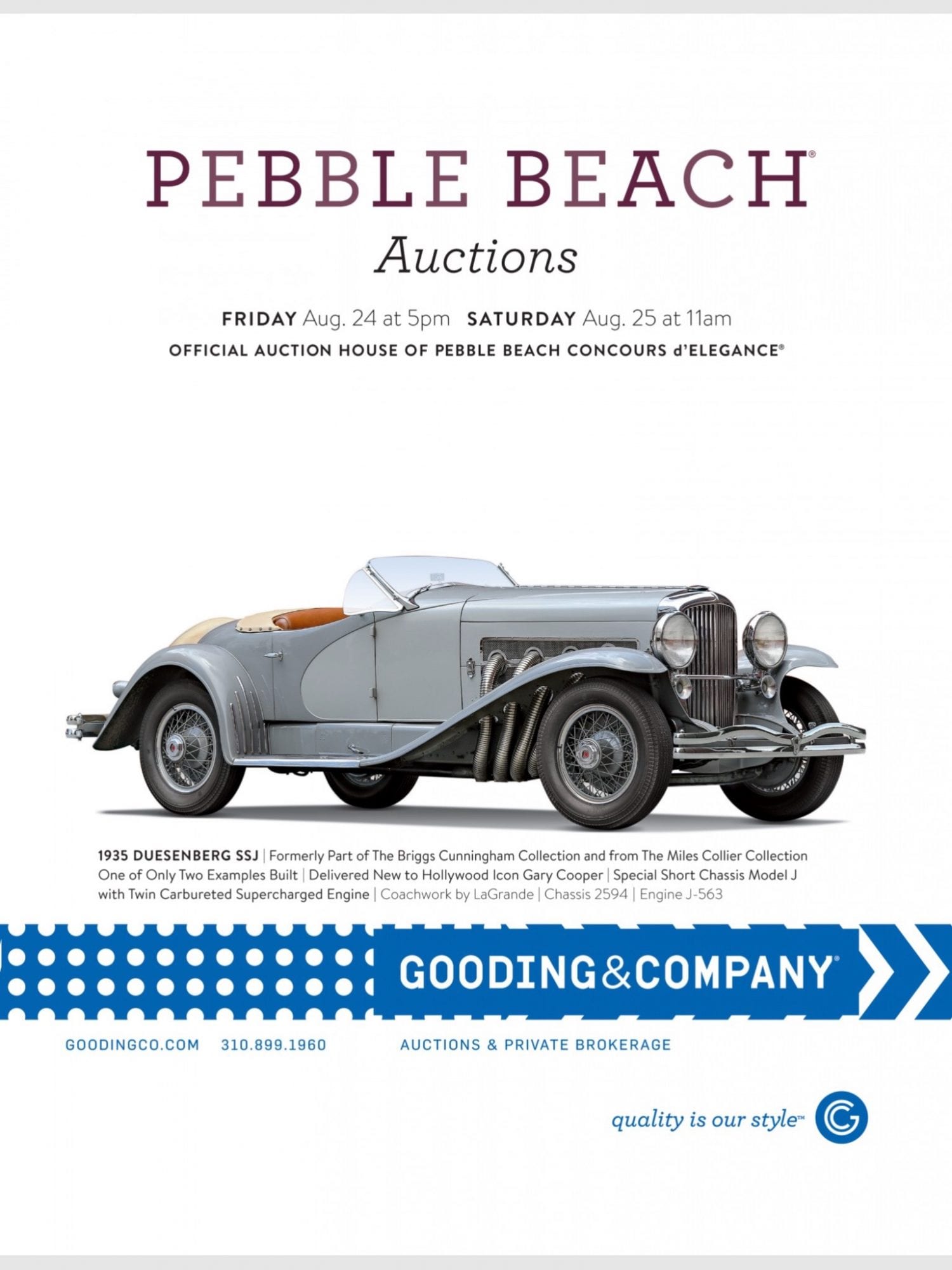 Below is the press release from Gooding & Co. announcing the sale of this most historic car.

Santa Monica, Calif. (July 10, 2018) – Gooding & Company, the official auction house of the Pebble Beach Concours d’Elegance®, is honored to present one of the greatest American classic cars ever offered for public sale.

“This incredible car embodies everything that is exciting about an automotive masterpiece:  beauty, rarity, provenance, and sheer power.  This SSJ is one of the all-time greatest classics and is poised to set an auction record for a pre-war American car,” says David Gooding, Founder and President of Gooding & Company.

The example presented here is one of only two Duesenberg SSJ models ever built, and was constructed on a specially shortened 125-inch wheelbase. The two cars were immediately destined for Hollywood’s biggest superstars of the day – this SSJ, chassis J-563, went to Gary Cooper and the other SSJ, chassis J-567, went to Clark Gable. Gary Cooper had a lifelong love of cars – particularly fast ones. The SSJ is not a car for the faint of heart, as a 400-hp supercharged twin-cam inline 8-cylinder engine lies beneath its impressive hood. With an ultra-rare twin-carburetor intake, this car produced 80 hp more than the standard Duesenberg SJ, which was already the most powerful and one of the fastest production cars of its day. The SSJ Speedsters sported a gorgeous lightweight open-roadster bob-tail body produced by LaGrande (Central Manufacturing Company), an Auburn subsidiary in Connersville, Indiana. Quite simply, it is widely regarded as the ultimate Duesenberg.

The SSJ is a 1930s Hollywood star’s dream car, a glamorous icon, symbolic of the Golden Age of Hollywood. Imagine this gorgeous Duesenberg SSJ, tearing down Sunset Boulevard with legendary actor Gary Cooper at the wheel.

The SSJ comes to sale from the Miles Collier Collections. “The Collier family is one of the great leaders and innovators in the history of automobiles. Miles Collier has made it his life’s work to educate and promote the understanding of the role of cars in our lives. He has also curated an extraordinary collection of classic and groundbreaking cars. The Miles Collier Collections are unmatched and that is why it is such a remarkable event that he would present one of his most admired classic cars for auction,” says Gooding.

Collier comments: “Many vehicles are billed as ‘speedsters’ or ‘racers,’ but the Duesenberg SSJ really was.  Peaking at 140mph in 1935, it was simply an unbeatable performer, matched by unbeatable style.”

Following Gary Cooper’s ownership, the SSJ then passed through a string of fascinating California owners, from a 20-year-old millionaire in Los Angeles to an industrial designer in San Francisco. In 1949, the SSJ was acquired by pioneering collector D. Cameron Peck of Evanston, Illinois. Peck, sold the SSJ Duesenberg to fellow collector and famed sportsman Briggs Swift Cunningham, who immediately jumped at the opportunity to acquire this car. The SSJ was a centerpiece in Briggs Cunningham’s famed museum in Costa Mesa, CA for many years.

On December 31, 1986, Miles Collier acquired the collection of Briggs Cunningham, a close family friend of the Collier family since the 1930s. Mr. Collier has since added to the collection and is known for having one of the world’s finest automobile museums due to his unwavering commitment to the importance of the automobile.  Although he possesses some of the most significant automobiles in existence, the SSJ remains one of Mr. Collier’s prized possessions, such that Collier prominently displayed the car at The Revs Institute in Naples, Florida for 32 years.

“Believe me, it is not easy to part with this wonderful car. It symbolizes so much in our history, and has so much glamour and speed. But my mission is bigger than just one car.  In today’s world, the automobile’s continued ability to be meaningful is under threat. Will the personal car be part of people’s lives in the future? Will people understand and remember that the automobile is the most important invention of our age? That it shaped the world as we know it? I want to ensure the legacy of skills, appreciation and care for the importance of motorcars is not lost.”

Since 1949, J-567 has been in the hands of just two caretakers: Briggs Swift Cunningham and Miles Collier, among the greatest names in car collecting. This timeless automotive treasure, with its mythical story and exceptional provenance, will always remain in the pantheon of the greatest collector cars.

The sale of this car out of the Miles Collier Collections is a significant move, a sign that he is elevating his mission to focus, steadfastly, on leaving a legacy of knowledge that anchors the automobile as the most important technological artifact of our age. Proceeds from the sale will be used to support Collier’s mission to create a substantial and self-sustaining automotive knowledge legacy for future generations.

The Miles Collier Collections are housed in The Revs Institute in Naples, Florida. This is a 501 (c)(3) not-for-profit organization, founded by Miles and Parker Collier in 2008. Revs presents the Collier Collection of over one hundred significant automobiles built between 1896 and 1995. The automobiles on display at Revs are some of the rarest and most important cars ever built at anytime, anywhere. They are the ones that variously blazed technical pathways, redefined aesthetic standards, made history, and changed the world.

Attended to by a staff of full time restoration technicians, these meticulously selected rare vestiges of automotive history remain operational and continue to demonstrate their engineering prowess on race tracks and roadways the world over. The Institute primarily serves as a haven for scholars, preservationists and passionate connoisseurs of automotive history. In keeping with Mr. Collier’s vision to embolden the legacy of the transformative impact the automobile had on 20th century society, The Revs Institute is also one of the leading repositories of historical automotive documents, photographs and ephemera.

With his wife Parker J Collier, he is putting together a new team of leaders and thinkers to create Revs 2.0, an idea-driven, not object-centered, new, non-profit initiative to provide the meaningful car community with insights and expertise they couldn’t find anywhere else. Alongside Revs 2.0, Parker Collier’s new company, Meaningful Ventures™ will create profitable, self-sustaining enterprises to carry the cultural legacy of the car to future communities.

Work has begun, with friends, colleagues and like-minded people, to build Meaningful Ventures™ which reflect this vision. Collier Car Clubs will set up communities of meaningful car owners. Collier AutoMedia will educate, entertain, provoke and inform digital visitors and readers. The Panzer Project uses a vintage, Mercedes 540K Action Panzer as a reminder of the realities of evil. Collecting Arts is the creator of a revolutionizing curation software system for virtually any kind of collection.

Philip Richter is President and co-founder of New-York-City-based Hollow Brook Wealth Management, LLC. The Turtle Garage Blog, he says, is dedicated to his "love of excessive personal transportation."
View all posts by Philip Richter →
The Pope’s Lamborghini
If You Don’t Read Another Book This Year….