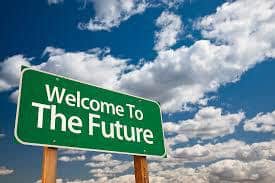 By Philip Richter on November 22, 2017 in Autonomous Driving, Cars, Videos

Over the last few months, I have been devouring several books on artificial intelligence (AI). While we have not reached the age of full-blown “cognitive computing,” the pace of the pace of change is accelerating at an astounding rate. No industry can hide from the runaway train of Moore’s Law. The following are insightful books that I recommend on the subject of AI:

I believe that the automobile industry will be among the most highly impacted by several exponentially advancing technologies. The timetable is suddenly collapsing and unthinkable changes may be unfolding way sooner than markets are discounting. Governments and the general public are not ready for what I call, “Automobiles 2.0.” Ride-hailing, electrification of powertrains, and autonomous technologies are suddenly no longer a Buck Rogers fantasy. Just as 2007 was a historic year with the launch of the revolutionary app-based iPhone, 2017 will go down in automotive history as the year that Uber became a verb and Tesla Autopilot went semi-mainstream. Rapid advancements in these emerging technologies may completely revolutionize our daily commutes—and our lives. The driverless non-fossil fuel car has the potential to completely upend industries from big oil to real estate to beverage companies. One could argue that the recent political tremors coming out of Saudi Arabia are directly related to these shocking technological trends. Are markets beginning to signal that there could be less global demand for black gold?

The Tony Seba video below is worth watching. The implications are profound. In a short hour, Seba’s lecture concisely pulls together many complex moving parts. Sure, some of his timetables are aggressive. However, directionally, I believe Tony Seba is most likely right.

Seba is a Stanford University futurist who has authored several books and has spent decades studying technological disruptions. In the video below, Seba persuasively argues that exponential progress with electric vehicles, battery storage, solar power, and autonomous technologies are all prime examples of 10x exponential events. Seba argues that because of rapid advancements in photovoltaics and battery storage, fossil fuels are destined to become the equivalent of 35mm film.

The following video was from Seba’s recent lecture in Boulder, Colorado. The video was filmed and edited by Martin Voelker with the support of the Colorado Renewable Energy Society.

One Response to Automobiles in the Age of Accelerations