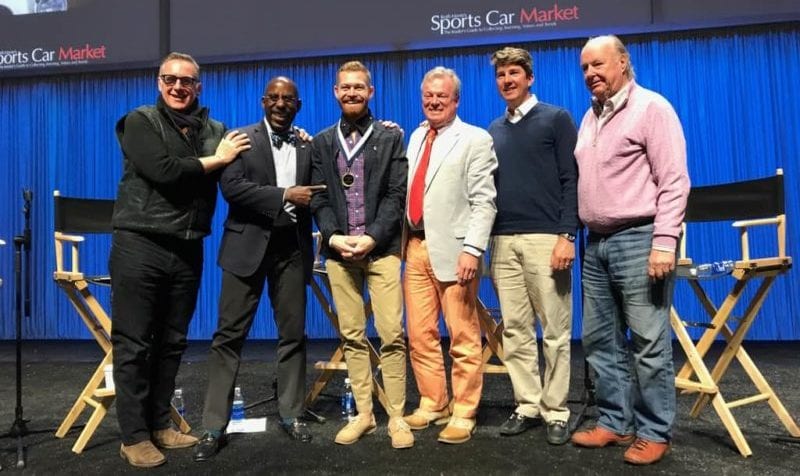 For the automotive industry and the collector vehicle market, 2018 was one for the record books. Shocking headlines combined with astounding auction results made 2018 an extraordinary and unpredictable year. Some key highlights:

THE STATE OF THE TURTLE:

2018 has been another year of growth and evolutionary improvement at Turtle Garage. Our subscriber base is steadily increasing, and we are experiencing a material increase in traffic, commentary, and interest. We added a “Bring a Trailer Spotlight” section to Turtle Garage. This new area features periodic curated auction reviews from recent sales on Bring a Trailer. If you have content ideas or want to contribute to the pages of Turtle Garage, please feel free to write us at philip@philipr8.sg-host.com. We are gearing up for the 2019 Turtle Invitational to be held at Turtle Garage in September 2019. Please join us! You can learn more about the event at www.turtleinvitational.com or reach out to event coordinator Chris Hughes. Email her at chris@philipr8.sg-host.com.

Turtle Garage hit the road and logged some miles in 2018. In January, we participated in the SCM Insider’s Seminar held at the Gooding & Co. auction tent in Scottsdale. On the podium were industry luminaries Stephen Serio, Donald Osborne, Paul Hageman, Keith Martin, and Carl Bomstead. In June, Turtle Garage displayed the 1988 BMW M6 at the Greenwich Concours. In August we made the pilgrimage to Pebble Beach and witnessed RM’s record-shattering $48.4 million auction sale of a ultra-rare Ferrari GTO. A week later we were at Lime Rock Park in Connecticut enjoying a weekend festival of vintage racing. During the year we read several excellent books. Our list included the new Henry Ford biography The People’s Tycoon, the incredible Phil Hill anthology Inside Track, a magnificent engineering book called The Perfectionists, and the timeless classic—The Art of Racing in the Rain. You can read book reviews about all these titles on Turtle Garage.

In 2018, autonomous driving continued its slow march forward—with one big step back. An autonomous Uber struck and killed a pedestrian in Arizona. Ford announced it would phase out passenger cars and focus on higher margin trucks while continuing to invest heavily on autonomous technologies. Elon Musk raised eyebrows at the SEC by making unsubstantiated claims about taking Tesla private. He also launched a Tesla Roadster into space—the car is currently orbiting the earth. In July, tragedy struck Chrysler and Fiat when their hard-charging CEO Sergio Marchionne unexpectedly passed away in Zurich after having a procedure on his shoulder. Renault, Nissan, and Mitsubishi are in turmoil as their rock star CEO awaits sentencing in a Tokyo jail for alleged fraud and misappropriation of corporate funds.

In 2018, Turtle Garage made some significant changes to the collection. Following the 2017 sale of our 1990 Mercedes-Benz 560 SEC and 1990 Miata, we reinvested some proceeds into a 100-point investment-grade 1995 Mercedes-Benz W140 V12 coupe. Bought new locally at White Plains Mercedes-Benz, this big majestic one-owner 18,000-mile car is currently underappreciated by the market and represents a high water mark for Mercedes engineering and build quality. We purchased this extraordinary example from Copley Motory Cars for a bagain valuation.

In January, TG sold our 1994 Porsche 928 GTS. This car hit a GTS auction record on Bring a Trailer. We watched the final moments of the auction with shock and awe as potential buyers bid up the price of this magnificent car. Our GTS was a one-owner black on tan example with 30,000 careful miles. We enjoyed driving the GTS and hope its new caretaker will continue to preserve this rare and special car. In October, we also sold our beloved 1988 BMW E24 M6. We have supremely enjoyed this car for over a decade, and when an unsolicited offer appeared, we resisted but ultimately could not turn it down. This astonishing sale further verifies TG contributor Dean Laumbach’s thesis that stratospheric valuations will often be placed on ultra-low-mileage original cars that have been properly maintained. The TG M6 was arguably the finest U.S. E24 M6 in existence with under 1,900 original miles. We hope the new owner of our M6 will be a great steward of this important (and increasingly rare) German artifact. We will undoubtedly regret this sale as time passes, however, we have re-invested a portion of the proceeds into some exciting new ultra-low mileage investment-grade vehicles. When we add a vehicle to Turtle Garage it must check three key boxes:

To replace the GTS and the M6, we added an investment-grade 2006 BMW E46 M3 to the Turtle Garage stable. Sourced from leading BMW M-car expert Eric Keller of EAG in Ohio, it is a one-owner example in Carbon Black metallic with the rare Competition Package and a six-speed manual gearbox. The E46 M3 represents the ultimate modern analog sports car and is beginning to enjoy a cult-like following among younger BMW aficionados. My wife Sarah had an identical Carbon Black Competition Package E46 M3 when she was in college—years ago we traded her M3 to Enthusiast Auto Group as a downpayment on our 1988 E30 M3. The new E46 M3 is not only a decent investment, it is also a car that evokes sentimental nostalgia for us.

We also recently added a stunning 2,900 mile 2008 Mercedes-Benz CLK Black Series. The rare car is finished in black on black. With huge fender flares, a rear seat delete, and low production stats (only 500 produced worldwide), we view the CLK Black Series as a rising modern classic Mercedes-Benz. Former Top Gear host Jeremy Clarkson owned a CLK Black Series and praised the car for its ferocious power, sharp handling, and intimidating styling. We think that this car is guaranteed to generate interest in the collector community in the coming years.

We continue to tweak “Project CJ.” The guys at Lee’s Garage are installing a factory hardtop and hard doors. We decided to do this because it is getting harder and harder to source high-quality OEM hardtops for the Jeep CJ-7. We found a perfect original donor top in Ohio, and it is currently being restored to factory new condition.

The motor on the 1937 BMW R5 motorcycle is complete, and the team at Vintage German Motorcycles is focused on final assembly. The TG R5 will arguably be the most exceptional numbers-matching 100-point R5 in existence—complete with comprehensive documentation from new.

Ongoing construction at Turtle Garage headquarters continues, and we are currently in the process of adding a bathroom and finishing the outside patio deck. These enhancements will be ready and functional in time to be enjoyed at the 2019 Turtle Invitational.

Finally, with the help and advice of Scott Coleman at Contemporary Motor Cars, we sourced a pristine off-lease daily driver bargain—a 2015 Mercedes-Benz S550 4Matic. This car has the optional autonomous system Distronic Plus which opened our eyes to the future of the automobile. Fortunately for us, the Mercedes S-class has a brutally severe depreciation curve and a factory warranteed car is an excellent alternative to buying a new car. The current S-class represents the zenith of the internal combusion automobile in terms of durability, safety, style, and technology. The all-wheel drive sedan is a jack of all trades and is one of the best all-around cars we have ever driven.

Turtle Garage continues to work closely with Keith Martin and the team at Sports Car Market. We are humbled to have had another cover story this year as well as several other articles published on the pages of this respected publication. Sports Car Market remains the leading collector car periodical for serious collectors and enthusiasts. Subscribe today!

It has been a busy and fulfilling year! We continue to look for ways to innovate and improve the Turtle Garage user experience. Please send your suggestions—we welcome your feedback! Please apply to show your car at the Turtle Invitational in September!

TG Wishes you and your family a joyous holiday season and all the best in 2019.

The TG Year in Review

Philip Richter is President and co-founder of New-York-City-based Hollow Brook Wealth Management, LLC. The Turtle Garage Blog, he says, is dedicated to his "love of excessive personal transportation."
View all posts by Philip Richter →
1998 Mauck MSV Custom RV: Very Well Bought
2019 Predictions: The Good, The Bad, and The Electric

One Response to 2018: The Year in Review