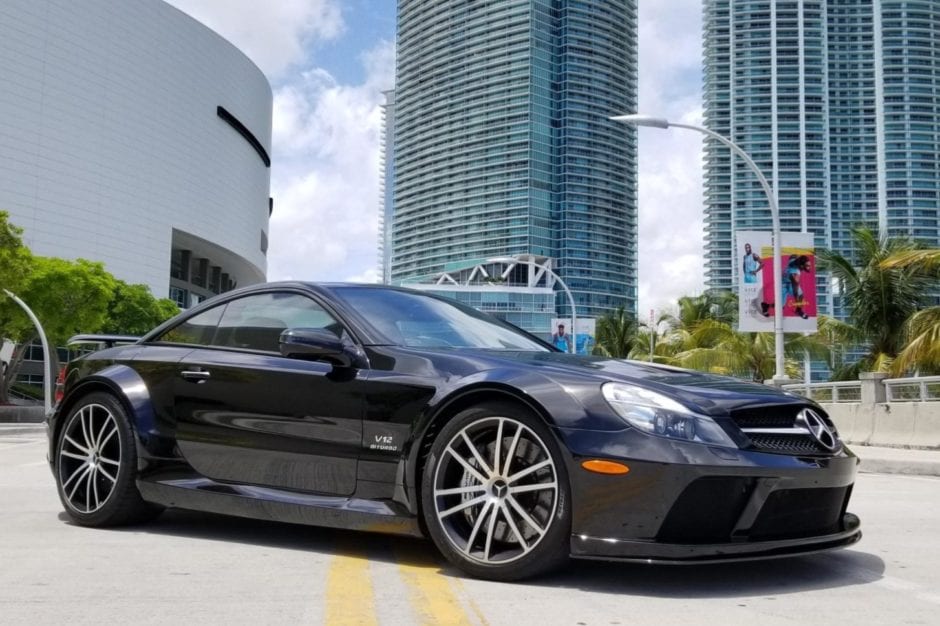 By Philip Richter on May 25, 2020 in Auction Spotlight

While we are talking our own book, the SL65 AMG Black Series is one of the most stunning post-war cars from Mercedes-Benz. With only 350 made worldwide, and only 175 in the United States, the car is quite rare. It is also amazing to drive on the road and great to look at while its parked in your garage. This car has almost 8,000 miles which is on the high side for this kind of exotic—but certainly not too high!

This 2009 Mercedes-Benz SL65 AMG Black Series is one of 350 total examples produced, 175 of which were designated for the United States market. Now showing just under 8k miles, the car is finished in black over a black leather interior and is powered by a twin-turbocharged 6.0L V12 paired with a paddle-shifted five-speed automatic transmission and a limited-slip differential. Additional features include widened Black Series–specific carbon-fiber bodywork, a fixed carbon-fiber roof, factory forged-alloy wheels, carbon-ceramic brakes, and COMAND infotainment. The car spent time in California and Texas before it was moved to Florida, where the selling dealer acquired it in mid-2019. Maintenance since that time included an oil change, a brake-fluid flush, and service to the speed-activated rear wing. This SL65 Black Series is now offered with service records, a clean Carfax report, and a clean Florida title.

Philip Richter is President and co-founder of New-York-City-based Hollow Brook Wealth Management, LLC. The Turtle Garage Blog, he says, is dedicated to his "love of excessive personal transportation."
View all posts by Philip Richter →
#bikesarethenewtoiletpaper
Movin’ Online: Classic Car Auctions in Transition—A Trend or a Fad?