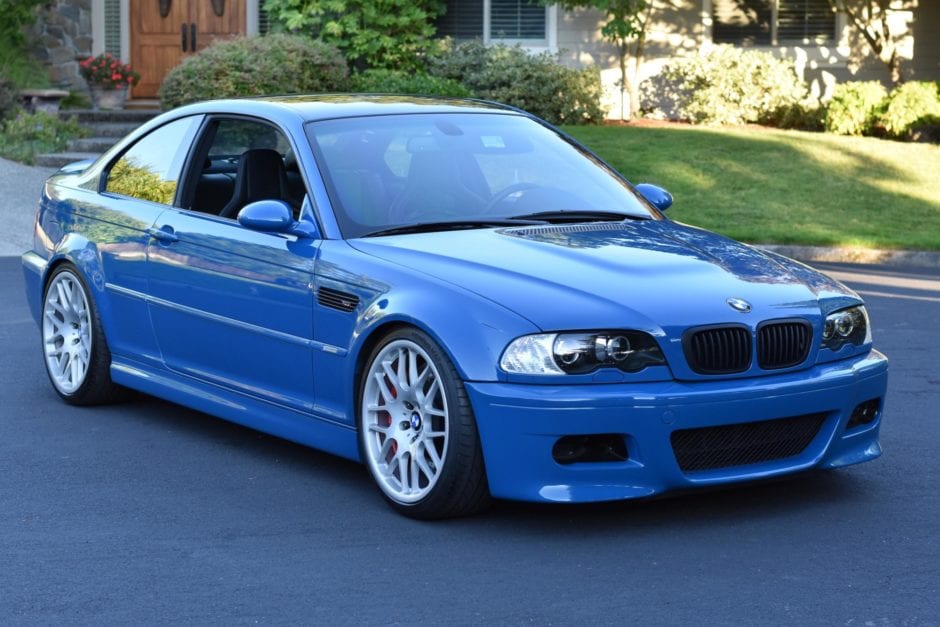 By Philip Richter on July 23, 2019 in Auction Spotlight

Auction Summary from BAT: This 2003.5 BMW M3 coupe is finished in Laguna Seca Blue over black and shows just over 16k miles. Power is provided by a 3.2-liter inline-six paired with a six-speed manual gearbox, and modifications consist of OEM CSL exterior components, Brembo brakes, JRZ RS1 coilovers, adjustable sway bars, 19″ RAC RG4 wheels, Recaro Sportster CS seats, a Beisan Systems VANOS unit, and Turner Motorsports subframe reinforcements. A BMW Inspection II was reportedly conducted at 14k miles in 2017, and the car was acquired by the seller in early 2019. This E46 M3 is offered with a Carfax report and a clean California title in the seller’s name.

The car is finished in Laguna Seca Blue, with PPF clear protective film reportedly applied to all painted surfaces as well as the Lightwerkz quad projector headlamps and roof. Other alterations installed under previous ownership include OEM CSL components consisting of a trunk lid, carbon fiber roof panel, and rear diffuser, while other modifications include a European-spec front bumper and brake ducts.

A ceramic window tint has also been added. Forged 19″ RAC RG4 wheels were designed specifically for the E46 M3 and recently refurbished according to the seller. Suspension modifications include JRZ RS1 coilovers as well as Turner Motorsports adjustable sway bars. New bushings were reportedly fitted to the front control arms, rear trailing arms, subframe, and differential under previous ownership. Braking is handled by six-piston Brembo calipers with 380mm rotors up front and four-piston units with 355mm rotors out back.

The interior features are pair of leather-trimmed Recaro Sportster CS seats with heaters linked to the factory switchgear. Other upgrades include an AutoSolutions short shift kit and CSL door panels, which feature carbon fiber inserts covered in clear protective film. The odometer displays just over 16k miles, approximately 500 of which have been added by the seller.

It goes without saying that 90k for an E46 is absolutely mental, but if you dissect it I think it becomes a bit more understandable. Obviously, the people bidding aren’t just collectors but enthusiasts as well if they appreciate the aftermarket parts. A perfectly stock LSB/Black/6MT/LCI with mileage in the teens is worth 55-60 on its own, and that shouldn’t be news to anyone. And then the wheels and brakes alone are probably worth nearly 15k. So I’m not even sure if you could “build” this for much less.

So even if it is crazy money, I can definitely understand why its THIS E46 pulling the crazy money. It’s a beautiful car, congrats to the buyer and seller.

At first, this outcome seems ludicrous. They built a lot of E46 M3 coupes and ample investment-grade examples exist. Furthermore, this car is not even a factory stock car—it has been heavily (albeit tastefully) modified. Regardless, this E46 has set a new standard and has raised eyebrows. The E46 is emerging as one of the greatest and most iconic M3’s of all time, save for the E30. Some BMW enthusiasts would argue that the E46 is the best M car ever made—its also the best one to drive. It is a perfect blend of analog and digital and the power to weight ratio is perfection. Its styling is classic pre-Bangle BMW, yet the car still looks current. The flared fenders make it look mean without being overly offensive. We are not sure if this car was well bought or well sold but the outcome is indicative of the New Normal for E46 M3’s.

Philip Richter is President and co-founder of New-York-City-based Hollow Brook Wealth Management, LLC. The Turtle Garage Blog, he says, is dedicated to his "love of excessive personal transportation."
View all posts by Philip Richter →
A Profile of Perfection
The Wheel, The Cart, The Carriage, The Car, The Driverless Automobile