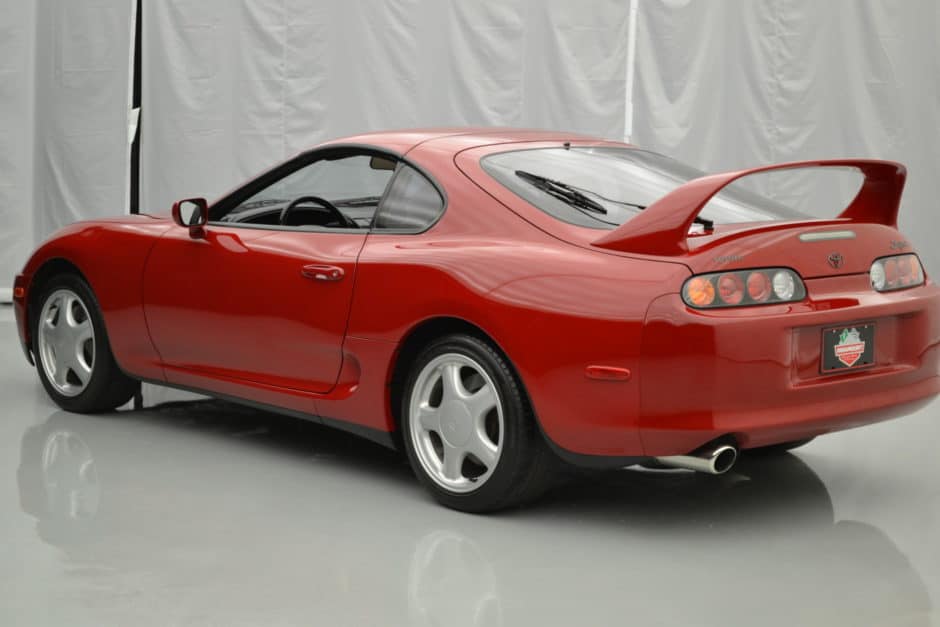 By Philip Richter on January 17, 2019 in Auction Spotlight

This 1994 Toyota Supra has just 7,000 miles and is powered by a turbocharged 3.0L inline-6 mated to a 6-speed manual gearbox. Finished in Renaissance Red over a tan leather interior, the car was first leased in 1994 in Florida. It then moved to Pennsylvania in 1999 when the lessee reportedly purchased the car. The selling dealer acquired the Supra 20 months ago and has changed the oil. Since then, the car has been stored in a climate controlled facility as part of the selling dealer’s private collection. This A80 Supra included the owner’s manual, a clean Carfax, and a clean Pennsylvania title.

This is a historic sale for both Bring a Trailer and the burgeoning “youngtimer” marketplace. A Toyota Supra for six-figures? Yes, you read that right. Investment-grade well-maintained examples of these performance cars are few and far between. Even back in 1994 the Supra was a cool car. Equipped with a six-speed gearbox, a massive rear wing, and a targa roof, the sculpted lines on this Japanese classic are flamboyant. While $121,000 may seem ludicrous for a Supra, we are looking at the new normal. Demographics are a powerful force! Most Supras from this era were driven hard and finding sub-10,000 miles cars is nearly impossible. This example enjoys “unicorn” status.

I expect the best examples to continue to rise over the next few years as more youngtimers have the means to own the cars of their youth. With a zero to sixty time of 4.6 seconds, the Supra is also a great car to drive. The Supra is experiencing a dramatic increase in value that is similar to what happened to the first-generation BMW E30 M3 a few years ago. This car was well sold….for now!

Philip Richter is President and co-founder of New-York-City-based Hollow Brook Wealth Management, LLC. The Turtle Garage Blog, he says, is dedicated to his "love of excessive personal transportation."
View all posts by Philip Richter →
2019 Predictions: The Good, The Bad, and The Electric
CarPlay For A Day