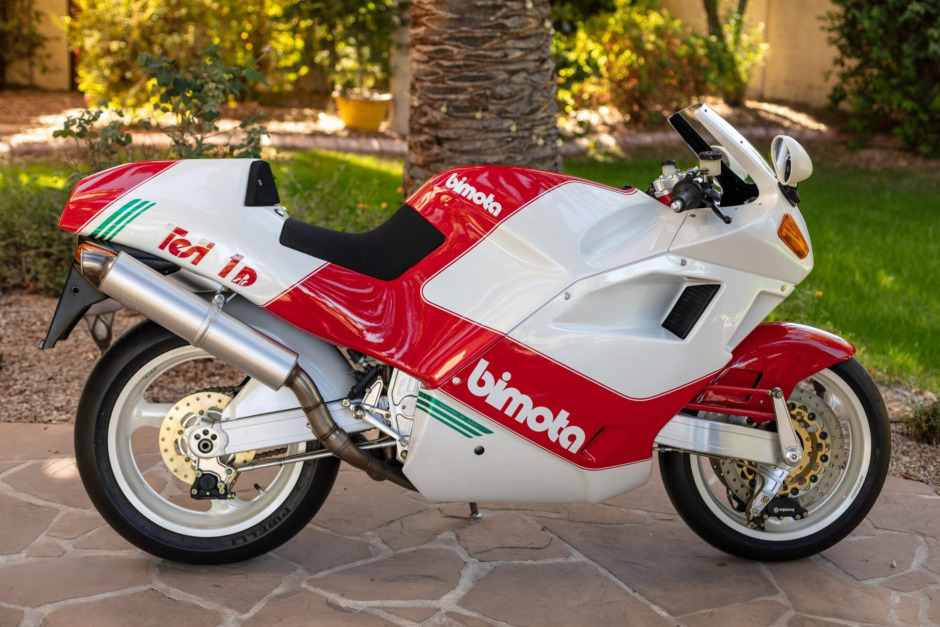 By Philip Richter on January 14, 2021 in Auction Spotlight

From BaT: This particular 1992 Bimota Tesi 1D was ordered new in pre-delivery condition by a Swiss collector, with whom it was displayed until being acquired by its current owner in 2010. The bike was subsequently kept on display in Europe until 2019, when it was imported to the US. Bimota produced several variations of the Tesi from 1990 to 1993, with the 904SR initially built for privateer racing. This example features a 904cc Ducati L-twin mated to a six-speed transmission and is finished in white and red with green accents. Equipment includes front and rear double-sided swingarms, hubcentric front steering, Marzocchi monoshocks, Marchesini wheels with Pirelli racing slicks, triple Brembo disc brakes, and a racing seat. This 904SR is offered by the seller on behalf of its current owner with both US and metric dashboards, street and race ECUs, an owner’s manual, a Ducati workshop manual, a wheel stand, a red Bimota cover, and a clean Arizona title in the owner’s name.

Bimota’s of this caliber and flavor only have one way to go. The only downside here is that this machine cannot be driven and enjoyed given its zero mile in-the-crate status. We prefer something with some miles that still can be enjoyed. Recently, Turtle Garage acquired a Bimota Tesi 1D from Bimota Spirit, the U.S. expert on Bimota. This is a machine with 1,500 miles and is fully serviced and running.

While $76,000 is a lot of money for a motorcycle, this particular Bimota was well bought!

Philip Richter is President and co-founder of New-York-City-based Hollow Brook Wealth Management, LLC. The Turtle Garage Blog, he says, is dedicated to his "love of excessive personal transportation."
View all posts by Philip Richter →
2020: A Year to Remember and a Year to Forget
Car-Crash Death Rate Surged in 2020