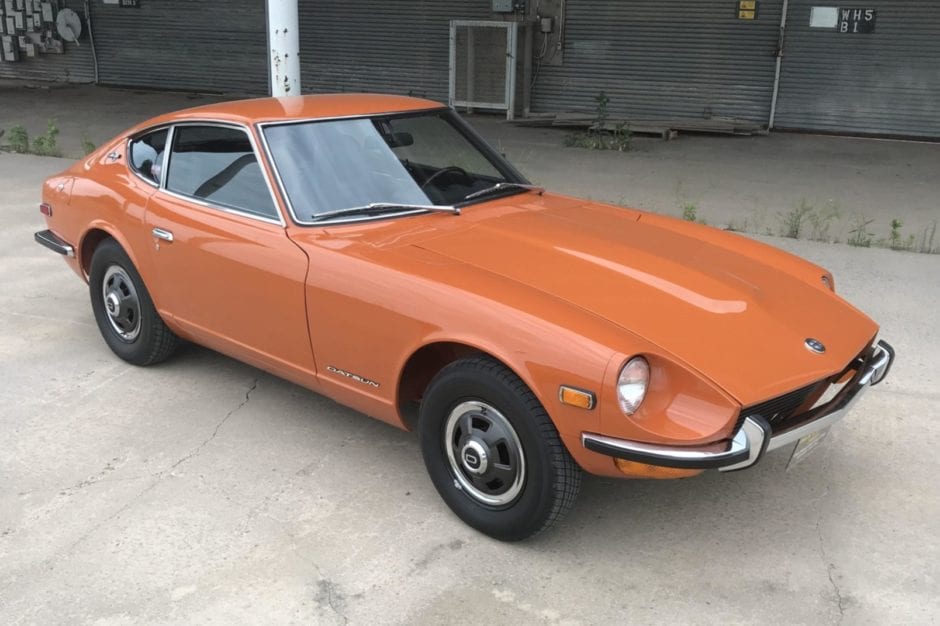 By Philip Richter on June 10, 2019 in Auction Spotlight

As if we needed more proof that the Japanese collector car market is on fire! Now comes this outlier sale on BAT of a totally stock 1970 Datsun 240Z. This 1970 Datsun 240Z is a Series I example which was restored by Bill Reagan of Texas in the early 1990s, subsequently receiving a Gold Medallion award from the National Z-Car Convention as well as being displayed at the Whitney Museum of Modern Art in New York. The car was also featured during the induction of former Nissan Motor Corporation USA president Yutaka Katayama into the Automotive Hall of Fame in 1998 and was further used as the basis for a Franklin Mint model wearing the same chassis number. Power is from a numbers-matching 2.4-liter inline-six paired with a four-speed manual gearbox, and the car is finished in orange over a black interior. This 240Z is offered by the selling dealer in Oklahoma with a Franklin Mint model signed by Katayama, supporting documentation and memorabilia, factory literature, restoration photographs, a Gold Medallion award, and a clean Delaware title.

Over 160,000 240Z’s were produced. This is a car with Coke can-like production stats, however, how many investment grade examples are left? As we have written in several articles in Sports Car Market, the new definition of rarity has nothing to do with production numbers. It is all about how many really good examples have survived. In this case (like the 2004 Supra), the market is telling you that the number of survivors is decidedly small. The 240Z has another thing going for it—it is a true drivers car. The six-cylinder motor is powerful and the driving experience unique. The bell has been rung and we will now see many more 240Z’s come out of the woodwork. The seller caught the updraft and the buyer got one of the best examples out there. Both parties are happy, but one is six-figures poorer. Well Sold!

Philip Richter is President and co-founder of New-York-City-based Hollow Brook Wealth Management, LLC. The Turtle Garage Blog, he says, is dedicated to his "love of excessive personal transportation."
View all posts by Philip Richter →
Horses and Horsepower: Two days, Two Shows
The Future of the Automobile: There is No Free Lunch